Understanding nature's geometry is the key to good garden structure

Nineteen eighty-six was a wonderful gardening year for me in Connecticut. By mid-July, every inch of my perennial border was in bloom, and I was thrilled. It was just what I had been working toward for 20 years—a summer garden absolutely filled with flowers.

For one glorious month, my heart sang. But even as I rejoiced to see so many daylilies and daisies in bloom all at once, I began to realize that there was more to a beautiful garden than masses of flowers. Although the border was a sea of color, it lacked definition. Like the soft prettiness of extreme youth, its charms were fleeting because it had no form or substance.

Looking at the bed with a more critical eye, I could see it needed structure. The overall effect was colorful but flimsy, and there was too much soft, arching daylily foliage. I also noticed that most of the plants were of a similar height. While the sloping site afforded an element of interest, the measured rise from front to back was monotonous (photo, above). There were no surprises—no highs or lows or changes in pace. Nor was there enough variety among the flower shapes. They were either flat or trumpet-shaped and all about the same size.

So I began making gradual changes. I started thinking in terms of the underlying shapes of the plants themselves, like cones, globes, mounds, spikes, fountains, and mats. I also started to seriously consider how the shapes related to one another. For example, plants that are strongly three-dimensional contrast with soft clouds of bloom, while spiky foliage provides an antidote to an excess of arching foliage.

Design Tip: Mimic the natural skyline with the placement of plants

One of the author’s borders (right) reflects the same natural contours as a landscape scene in Columbia County, New York.

Some shapes add weight to a garden’s design 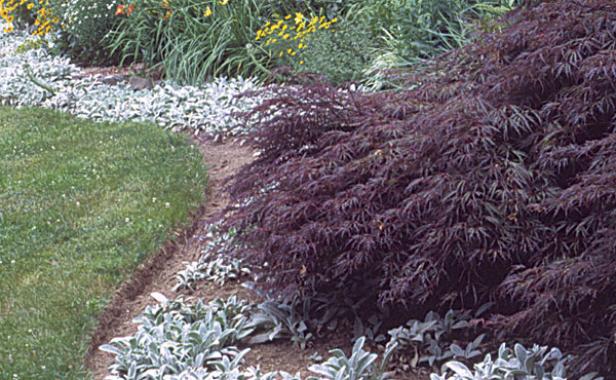 My stirrings of dissatisfaction about the monotony of my perennial border coincided with a new phase in my gardening life. I had recently met a number of younger garden-makers in Connecticut, among them Peter Wooster and his gardener, Gary Keim. Quite apart from being enchanted by them both, I was tremendously impressed with the garden they were creating. It had just what mine lacked: a sturdy framework of shrubs and evergreens to support a mind-boggling collection of annuals, perennials, and tender exotics.

When I asked Peter how he went about arranging the plants, he offered the following tip: If all the plants are about the same size, you need something big to hold it all down. You need height in the middle of the bed from evergreens or shrubs. Then, each bed has corners that should be addressed.

I learned from him that weight exists only in the mind and eye of the beholder, but its presence or absence can be the making of a garden. A compact, well-proportioned evergreen shrub anchors the lighter elements in the composition. Solid geometric shapes like cones, globes, and mounds carry weight. Dark foliage seems heavier and more substantial than light foliage, and large leaves seem weightier than small ones, unless the small ones are dense, uniform, and numerous, as in needled evergreens.

While our gardens are very different in layout—Peter’s is rectilinear; mine flows with the contours of the land—the same principles apply. Inspired by his example, I sacrificed some of my beloved daylilies to a dwarf Alberta spruce (Picea glauca var. albertiana ‘Conica’).  Its short dark-green needles packed into a neat cone shape added weight to the border. I also added vertical fountains of tall ornamental grasses and afew bold, high-rise perennials to break up the groups of false sunflowers (Heliopsis helianthoides).

One end of the border had long since been “addressed” by the substantial presence of an old threadleaf Japanese maple (Acer palmatum var. dissectum ‘Crimson Queen’). During the growing season, its woody skeleton is covered with a mass of lacy mahogany-red foliage. This dark mound completes the border just as a period completes a sentence. At the opposite end, I added another dark mound, a fast-growing purple smoke bush (Cotinus coggygria ‘Purple Robe’) to balance the maple. By cutting the smoke bush nearly to the ground every spring, the new growth reaches only about 8 feet high instead of 15 feet and retains its color. Now, the two dark-leaved shrubs hold the border within their embrace, like a pair of bookends.

Although the changes I made were modest, they transformed the garden. It became interesting to look at even when nothing was in bloom. Instead of a boring straight line, it had a horizon with ups and downs—vertical forms and low, crouching forms. The addition of the grasses and shrubs provided variety in terms of value as well as form. The green-and-white-striped grasses and the variegated leaves of a redtwig dogwood (Cornus alba ‘Elegantissima’) supplied highlights; the red- and purple-leaved shrubs and the Alberta spruce, contrasting dark accents.

Broad at the base and tapering to a point, cone shapes carry weight in a garden and provide stability.

A plant’s form can be two- or three-dimensional

Meanwhile, the lessons I had learned from Peter’s garden were being incorporated into the two new beds I began working on in 1990. These beds divide the “civilized” part of the garden from the wilder part and have an opening between them. To address the ends of the beds on either side of the opening, I planted a pair of Alberta spruces and matching clumps of fountain grass (Pennisetum alopecuroides) to give them weight. The forms are distinct and highly contrasting—the evergreens solid and pyramidal; the grasses, despite their name, soft and mound-shaped.

Lynden Miller, who was an artist long before she became a designer of public gardens, once said, “If you made a brand- new garden and put in a couple of vertical dwarf evergreens and a couple of rounded ones, you’d be halfway there because you’d have given it geometry.” The trick is to fathom nature’s under­lying geometric forms and to deploy them effectively. Form, of course, can mean either the three-dimensional shape—volume—or the two-dimensional outline of a plant. Both come into play in the design of a garden.

What delights the eye about a range of hills or a distant cityscape is the variety of pleasing forms silhouetted against the sky. The same is true in a flower bed. It was the skyline of my garden that improved so much with the addition of shrubs and other tall plants to give it changes in height.

Within a border, shapely perennials like Sedum ‘Autumn Joy’ provide satisfying three-dimensional forms. I sometimes shape others with a bushy habit into globes or mounds. Threadleaf coreopsis (Coreopsis verticillata ‘Golden Shower’) with its forest of stiff, upright stems and fine, dense foliage lends itself to this treatment. So does Kalimeris integrifolia. Its woody stems are lavishly clad in small-toothed leaves and covered with little white daisies. Trimmed into a globe in the spring, it holds its shape throughout the season.

Globes contrast well with spikes and fountains. Shrubs that do not grow naturally into globes can be pruned into this shape.

Good design relies on line as well as silhouette and form. Spears of foliage and flower heads that rise like spires provide high points and are useful to contrast with mounds and globes. In my sunny borders, fuzzy wands of pinkish-purple gayfeather (Liatris spicata ‘Kobold’) and pudgy spikes of dusty-purple Agastache foeniculum serve that purpose. In the shade, the tall white flower spikes of Hosta ‘Royal Standard’ are attractive, rising out of their mounds of lush foliage, with airy white wands of snakeroot (Actaea racemosa) waving overhead.

Besides being valuable for their height, tall linear plants like the snakeroot contribute grace and elegance to a flower bed. And the clean lines of yuccas, irises, and certain upright grasses offer refreshing relief from arching foliage or too many plants with a billowing habit.

Mounds carry weight but are softer and lower in profile than globes.

In the winter, line is the name of the game. At this time of year, I really appreciate ornamental grasses. Unless a torrential rain fells them first, Miscanthus sinensis ‘Morning Light’, maiden grass (M. sinensis ‘Gracillimus’), zebra grass (M. s. ‘Zebrinus’), switch grass (Panicum virgatum), and blue oat grass (Helictotrichon sempervirens) all stand up to be counted in the winter. But the queen of the border in winter is the threadleaf Japanese maple. Bare, her beautiful zigzag branches cast interesting shadows; trimmed with ridges of snow, they are breathtaking.

The evergreens, of course, come into their own at this time of year. The same Alberta spruces that steadied the flower beds in summer are the stars of the winter border. Solid and reassuring, they stand sentinel at each end of the new beds. The nearby grasses provide a contrast in form and color. In one bed, a globe of variegated boxwood and a neat, twiggy ball of bar­berry (Berberis thunbergii ‘Golden Nugget’) furnish the edge. A smooth stone, unearthed when I dug the bed, brings the number of rounded forms to three.

This year there will be two new boxwood globes, very small but not to be dismissed. One day, they will take their places at each end of the matching borders with the Alberta spruces and mounds of fountain grass in a trio of satisfying shapes.

Tall plants that are relatively narrow at the base and flare outward at their tops add grace and elegance to the garden.

Mat-forming plants lie low and tie a garden to its site.