When presented with the estimate for the list of annuals for her containers on her terrace, my customer lamented, “It seems like so much money to spend on plants that will be thrown away at the end of the summer.” Aiming to please, I decided to experiment with perennials that could be used in containers and later transferred to the garden.

Before this, I hadn’t tried using any perennials in containers. At first, visions of flopping plants and pathetic foliage flashed through my head. What was I going to do about the fact that most perennials only bloom for about a month? I began looking through plant catalogs with a few requirements in mind.

What plants to choose

First, I didn’t want anything that had to be staked or fussed with. Then I looked for plants with interesting textures and colorful foliage. Finally, I wanted to be able to reuse these plants in the garden. Some of the plants had to be able to withstand the relentless heat and sun of a southwestern exposure. Others needed to flourish in the shady conditions of the north side of the house. The containers needed to be planted by mid-May and still look good by the end of the summer.

My choices for that first season were a bit cautious, but they were successful. For the sunny side, I chose groupings of fountain grass, tickseed, tricolor sage, and aster. Because I planted in early May, I decided to use the annual white alyssum to spill out over the edge of the container, to give it interest until the perennials kicked in. On the shady side, I used ‘Frances Williams’ hosta, bleeding heart, and spotted deadnettle, with the annual blue lobelia as an edging.

By the time I had finished, the containers looked respectably full, although a bit quiet. By mid-June, the perennials were so full that they almost covered up the alyssum and lobelia on the edges. The foliage colors of the hosta and lamium were cool and soothing on the shady refuge of the north-facing terrace, and the flowers and foliage of the bleeding heart lasted well into early fall. The tickseed beamed its pale yellow lights starting in July and was a handsome companion to the fountain grass. In August, when most containers are looking weary, mine were fresh and lively. 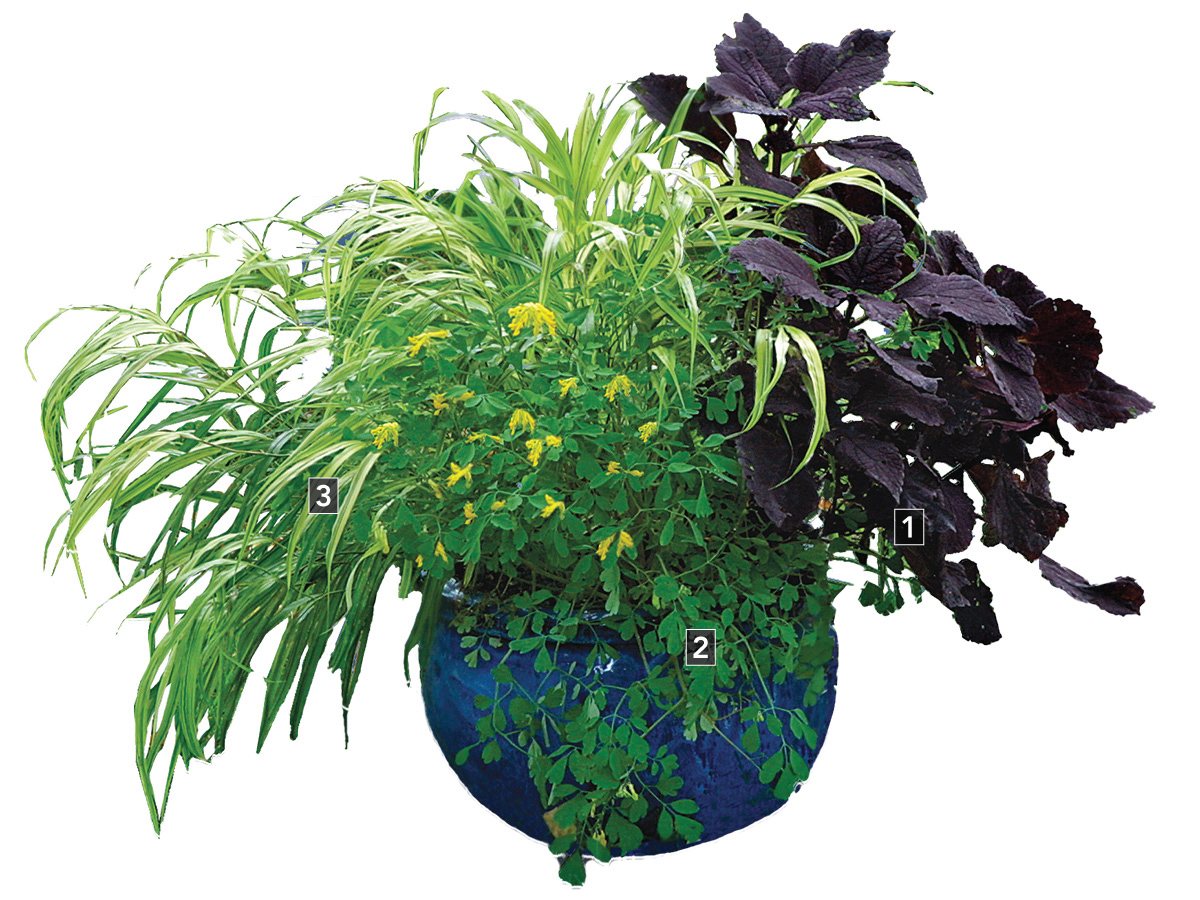 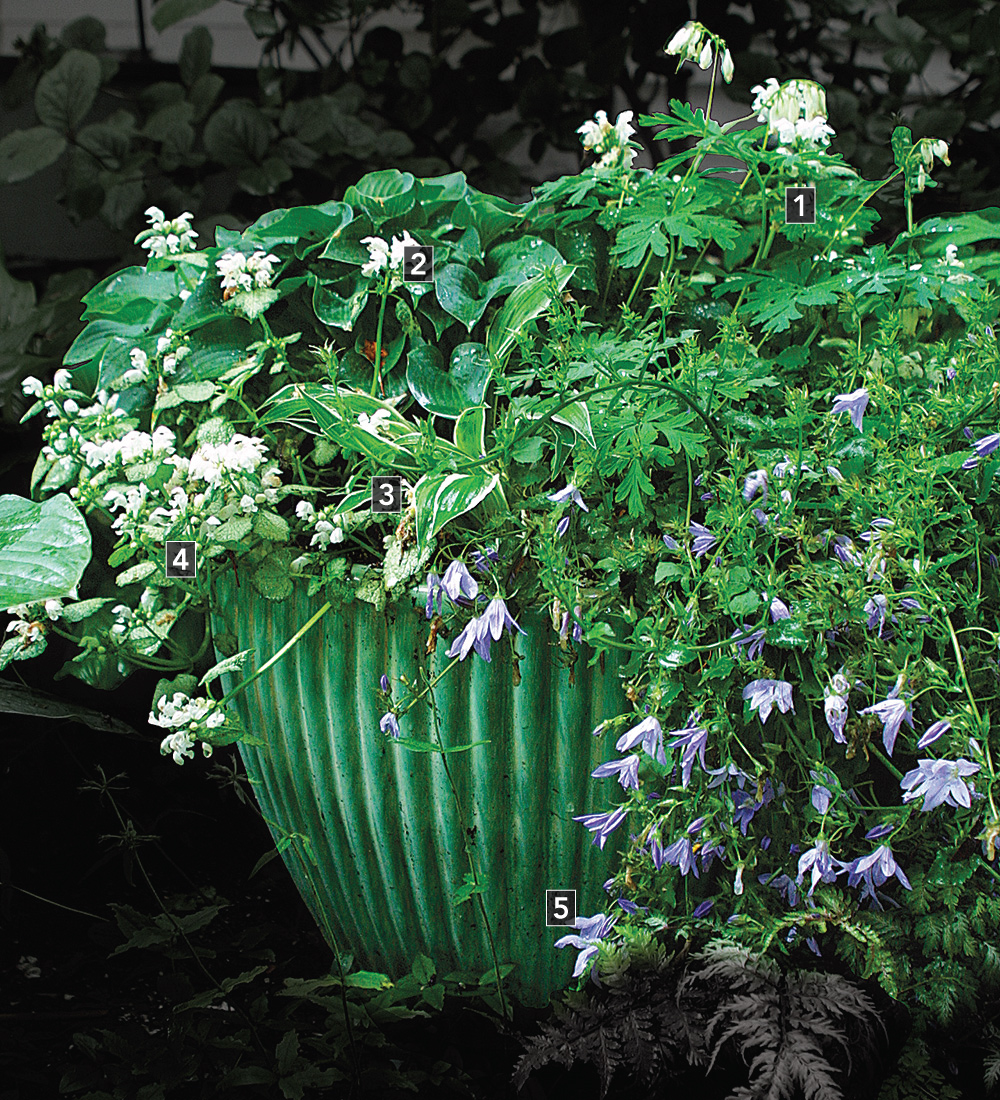 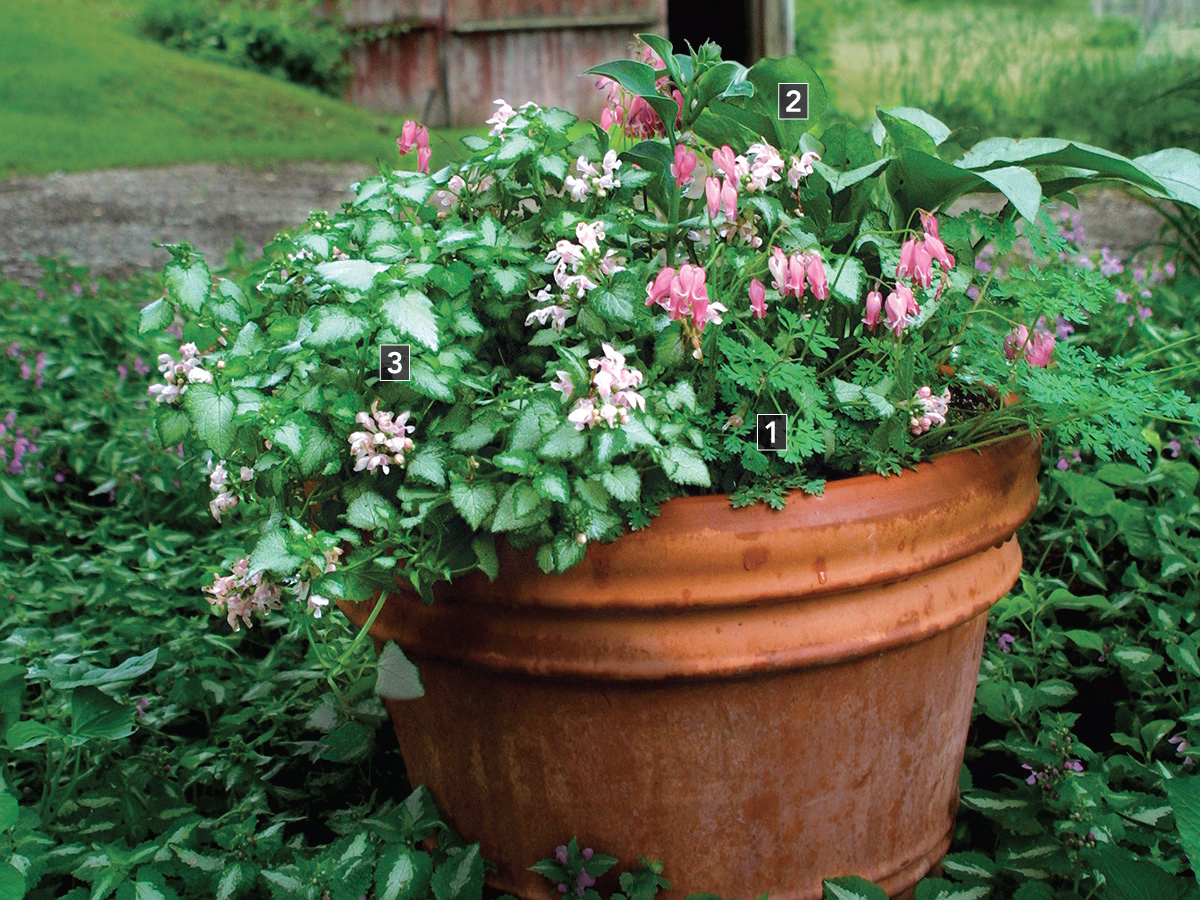 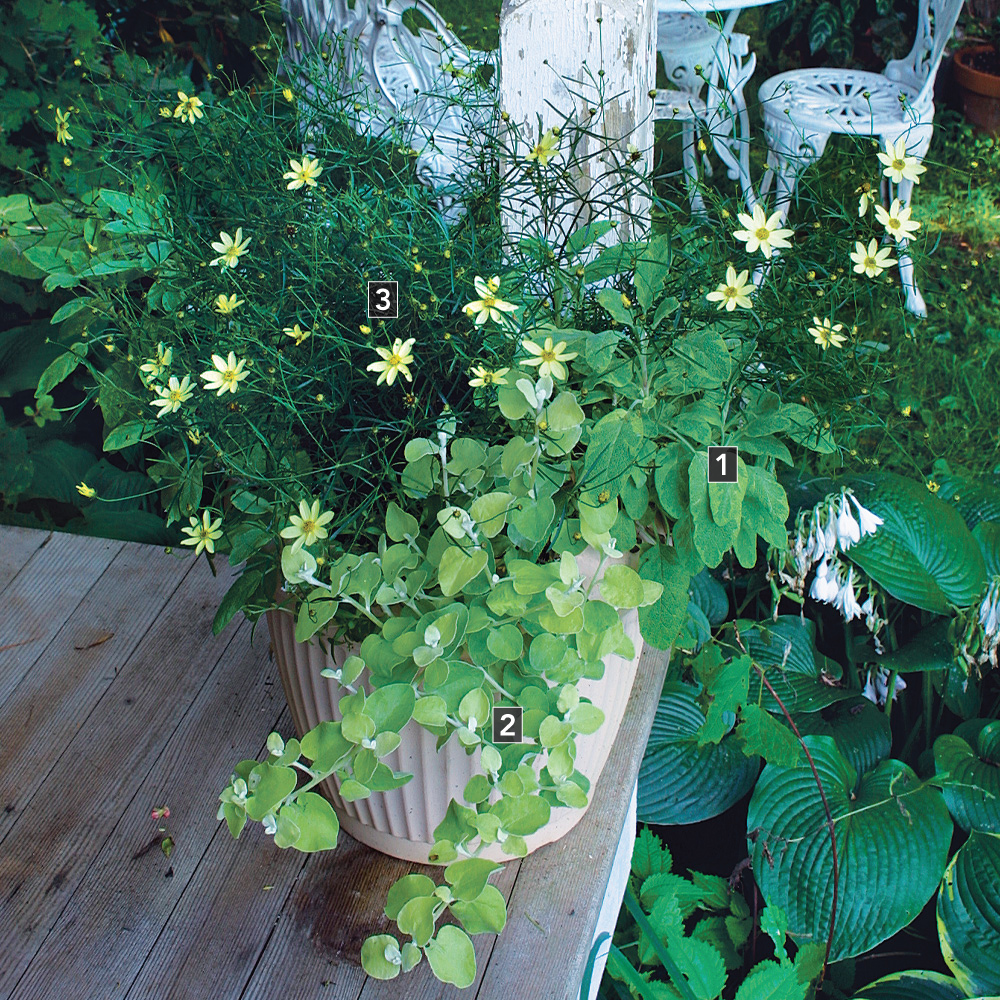 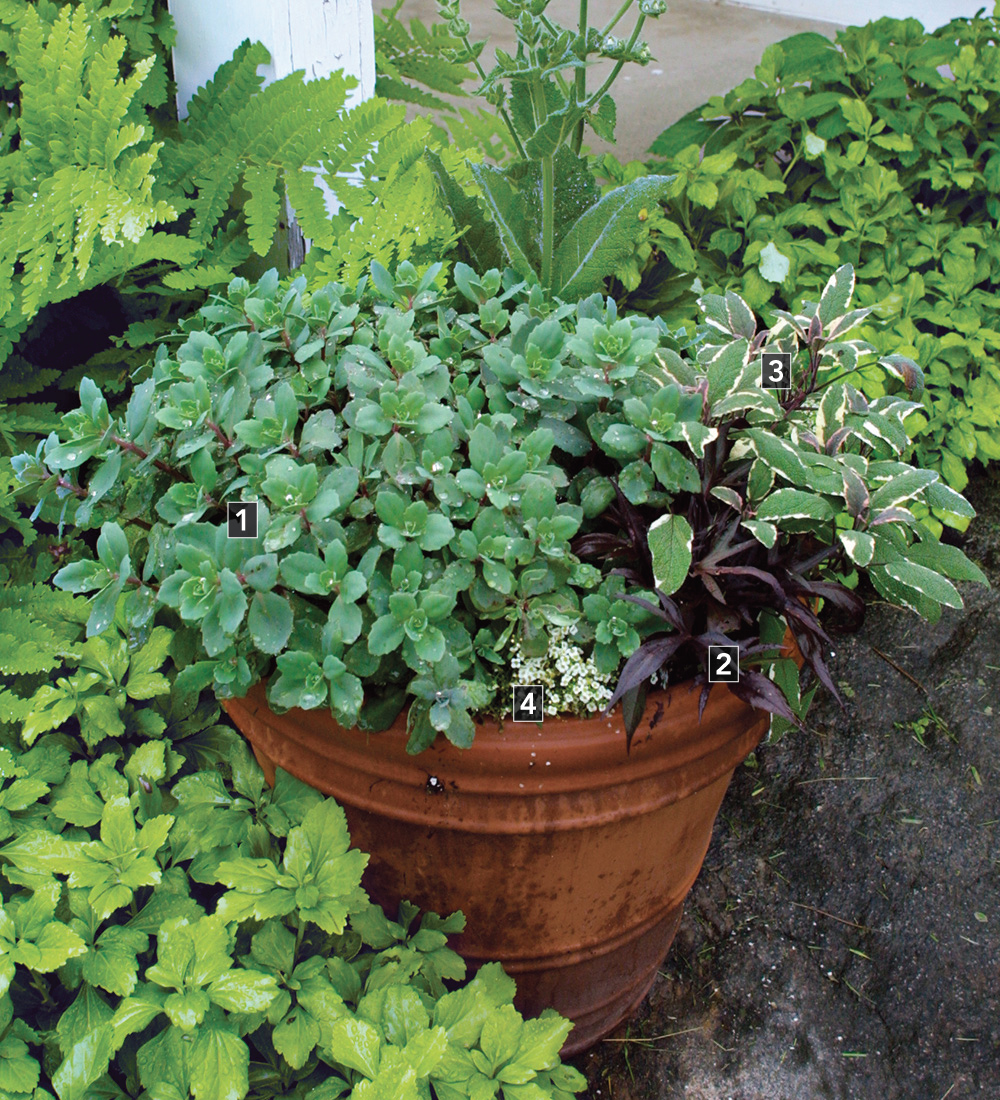 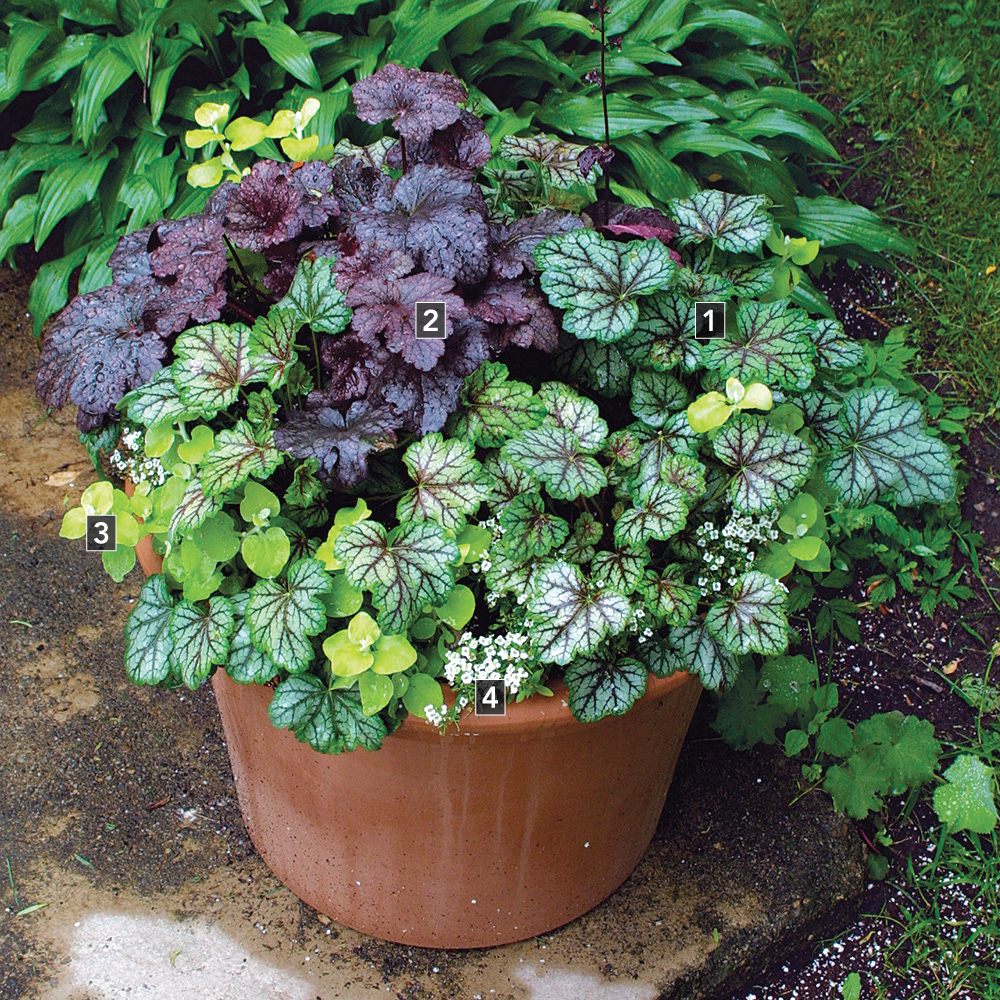 15 more perennials that shine in pots

Transfer plants to the garden at season’s end

The perennial containers were much easier to care for than their annual counterparts. They required far less deadheading and deadleafing than annuals do. I was able to water them less often, and they didn’t get that tired look that annuals have around Labor Day. Also, I enjoyed watching the transition of the plants’ growth throughout the season. This was a great way to experiment with new plants. I had all summer to note their habits and changes and to decide where and how I wanted to use them in the garden.

I emptied the containers in October. Even though they still looked pretty good, I wanted the plants to have a chance to acclimate to the garden before the cold weather arrived. I carefully lifted the plants out using my trowel and hands. Some plants had grown quite a bit, so I divided them—an added bonus. I went around the garden with my “leftovers,” tucking them into all the bare areas. Some plants didn’t fit into the existing garden scheme just then, so I put them aside into a holding bed for the following year. I treated them all as new perennials, watering them in well and covering them with evergreen boughs after the ground froze to protect them from heaving.

Originally, I had planned for my containers to be at their peak in August and September, but experimenting with perennials over the years has shown me that I can have a palette of color and texture that changes throughout the season. The garden benefits from my regular fall infusions of plants, and having extra plants around is also great if I feel like starting a new project. When I’m planting new containers in spring and I need extra material, I can just go dig it out of a bed or divide an existing perennial. And best of all, as I pointed out to my client, we get two different uses out of the same plant. That’s garden synergy at its best.

Christine Froehlich is a garden designer living in Sodus Point, New York, on the banks of Lake Ontario.

All photos, except where noted: Michelle Gervais

This site is protected by reCAPTCHA and the Google Privacy Policy and Terms of Service apply.
See all newsletters
Next: 10 Plants for Year-Round Containers
X
View Comments