Instead of adding them as an afterthought, let evergreens drive the design

When we first bought our house in 2000, I was pregnant. The previous owner had no interest in the garden. Since there was almost nothing planted, I just threw a few perennials in to fill space. As I spent the first winter inside caring for my baby and looking out the windows, I realized that I was staring at soil in most places and found it pretty depressing. I wanted a more permanent garden that wouldn’t totally disappear in the winter months.

I was lucky enough to grow up surrounded by a lush, year-round garden. So I guess it’s no surprise that as an adult I wanted a similarly abundant landscape—but one that was lower maintenance. To fulfill that wish, I relied heavily on conifers. Once I had one cultivar, though, I wanted them all. This is difficult to do with conifers unless they are dwarf—which is what I primarily planted. Ultimately, my garden ended up having a backbone of conifers, which provide a delightful asymmetry. The space has a calm aesthetic (an important quality for me), due in no small part to the many shades of green provided by the needled treasures. The conifers were also the jumping-off point for unusual plant combinations based on color and textural contrasts.

Lots of conifers have tall, upright habits. Perhaps this is why they’re often relegated to the back of the garden. But some columnar conifers deserve more thoughtful consideration when it comes to placement. After all, with a tall, rocketlike habit, these plants are natural focal points. I use several of these plants to guide people in subtle ways through the garden. For instance, a ‘Treasure’ Lawson’s false cypress (Chamaecyparis lawsoniana ‘Treasure’, USDA Hardiness Zones 5–9) with the habit of an exclamation point marks the entry to the steps leading to our front door. With its bright yellow variegation, it draws your eye and shows the way. It is surrounded by lower, bluer conifers so that it stands as a sentinel of a different hue. I also deliberately kept the profile along the various walkways low so that the layers of taller plants throughout the beds behind can be seen in one sweeping glance.

In the back garden, I used columnar conifers as well. A ‘Compressa’ juniper (Juniperus communis ‘Compressa’, Zones 3–6) stands tall and pulls you in to see a small pond at its feet. Without the conifer, it’s doubtful that anyone would know to look for the water feature. The juniper seems to tower over the cement sculpture of an otter, but in fact, at 15 years of age, it is still less than 3 feet tall. Encircled by dwarf conifers to soften the edges, the pond is a surprise discovered only once you get close to it—all thanks to the focal-point conifer. In several other areas, I’ve placed tall conifers in unlikely spots (not confined to the back of the property), and that placement helped add needed focal points to the whole landscape.

Use color echoes and textural contrasts to form long-lasting combinations

When most people think of conifers, they think green. However, there are infinite shades of conifers from yellow to green to blue—some are even multicolored. Their textures vary greatly as well and can be combined to make interesting vignettes. I basically combine conifers the way most gardeners would combine perennials, relying on contrasting textures and color echoes. In one area of my garden, for instance, I planted a bluish Japanese white pine (Pinus parviflora ‘Aoi’, Zones 5–7) near a ‘Silberlocke’ fir (Abies koreana ‘Silberlocke’, Zones 5–9) because the pine helps highlight the bluish-silver undersides of the fir. The blue colors truly pop against the neighboring dark green Majorcan peony (Paeonia cambessedesii, Zones 7–10) and variegated ‘Limelight’ daphne (Daphne odora ‘Limelight’, Zones 5–9).

Perennials help enhance the conifer combos throughout the garden, too. Hostas (Hosta spp. and cvs., Zones 3–9) mingle with the evergreens in spring and summer, repeating and contrasting the colors and textures of the nearby needled foliage sprays. Similarly, ‘Jack Frost’ brunnera (Brunnera macrophylla ‘Jack Frost’, Zones 3–8) beautifully echoes the light green tips of the ‘Little Bogle’ larch (Larix decidua ‘Little Bogle’, Zones 2–6)—and helps emphasize the rich green above of a nearby ‘Curly’ Eastern hemlock (Tsuga canadensis ‘Curly’, Zones 4–7). The bold leaves provide a great textural contrast to the neighboring feathery conifers, too. Sometimes it’s hard to get away from a sea of green when you have a garden filled with conifers. When combining similar shades of green, creating textural contrasts is particularly important. Perennials once again play a key role. For example, an iris’s (Iris cv., Zones 2–9) stiffly erect leaves emphasize the soft, curvy growth of a ‘Blue Dwarf’ larch in one area of my beds.

Visitors to my garden often comment about the number of plants and how closely they are planted. Many are dwarf conifers that grow slowly—but if a particular plant in the garden gets too large or if I fall out of love with it, I give it to a friend or neighbor. Even large conifers can be moved if you root-prune a year ahead. I still hunt for new conifer cultivars that I don’t have. I see little else in a nursery, particularly in spring when the new growth is a different color and quite bright. Perhaps that’s why I initially filled my beds with conifers instead of perennials. For me, the sculptural, textural, and colorfully steady presence of conifers is reassurance that my garden is there all year to enjoy. 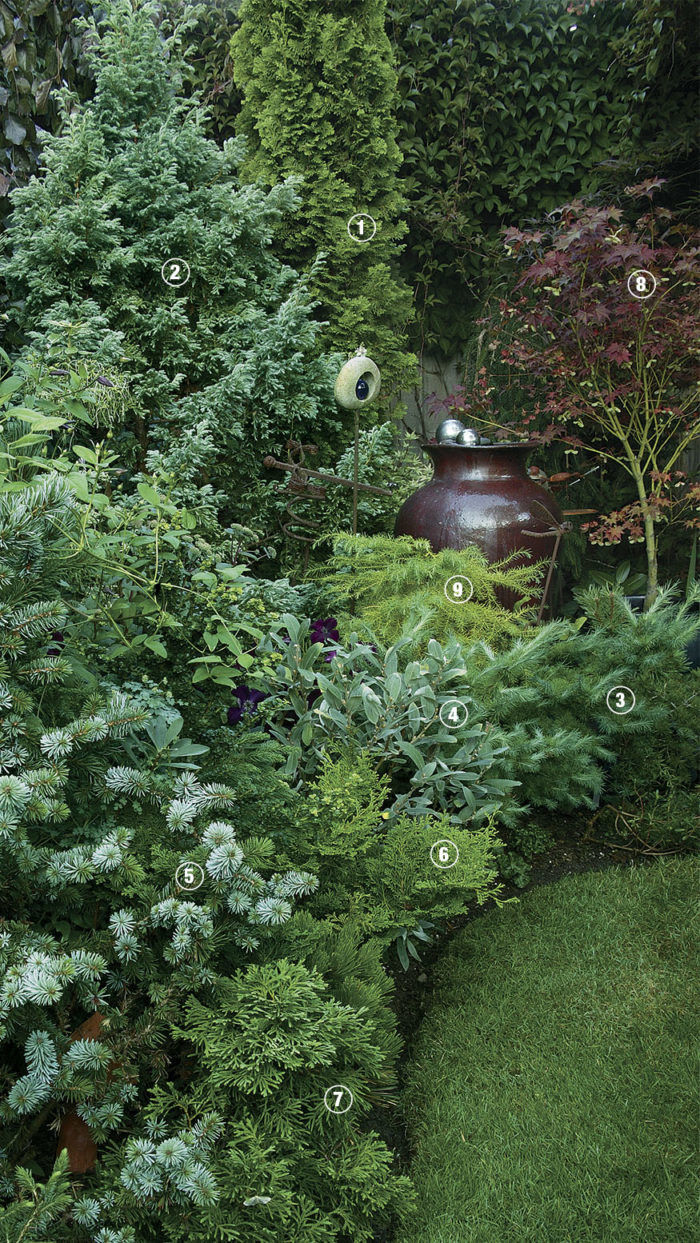 Here’s an example of a vignette that started on the nursery cart and ended up looking just as amazing in the garden. The first plant was ‘Degroot’s Spire’ arborvitae because I wanted something close to the urn that would not over-power it. Next, I placed the ‘Boulevard’ false cypress for a pop of brighter blue near the burgundy pot, and the ‘Blue Dwarf’ larch was added to echo that blue. The willows’ silver brightens the blues. ‘De Ruyter’ Siberian spruce, with green and blue needles on one plant, ties in the ‘Flabelliformis’ hinoki cypress and the ‘Mossy’ arborvitae below to the blue palette. ‘Tsuchigumo’ maple adds a hit of burgundy to the group, tying in the urn color. The lime green seedpods of the maple echo the bright green ‘Elegans’ cryptomeria. 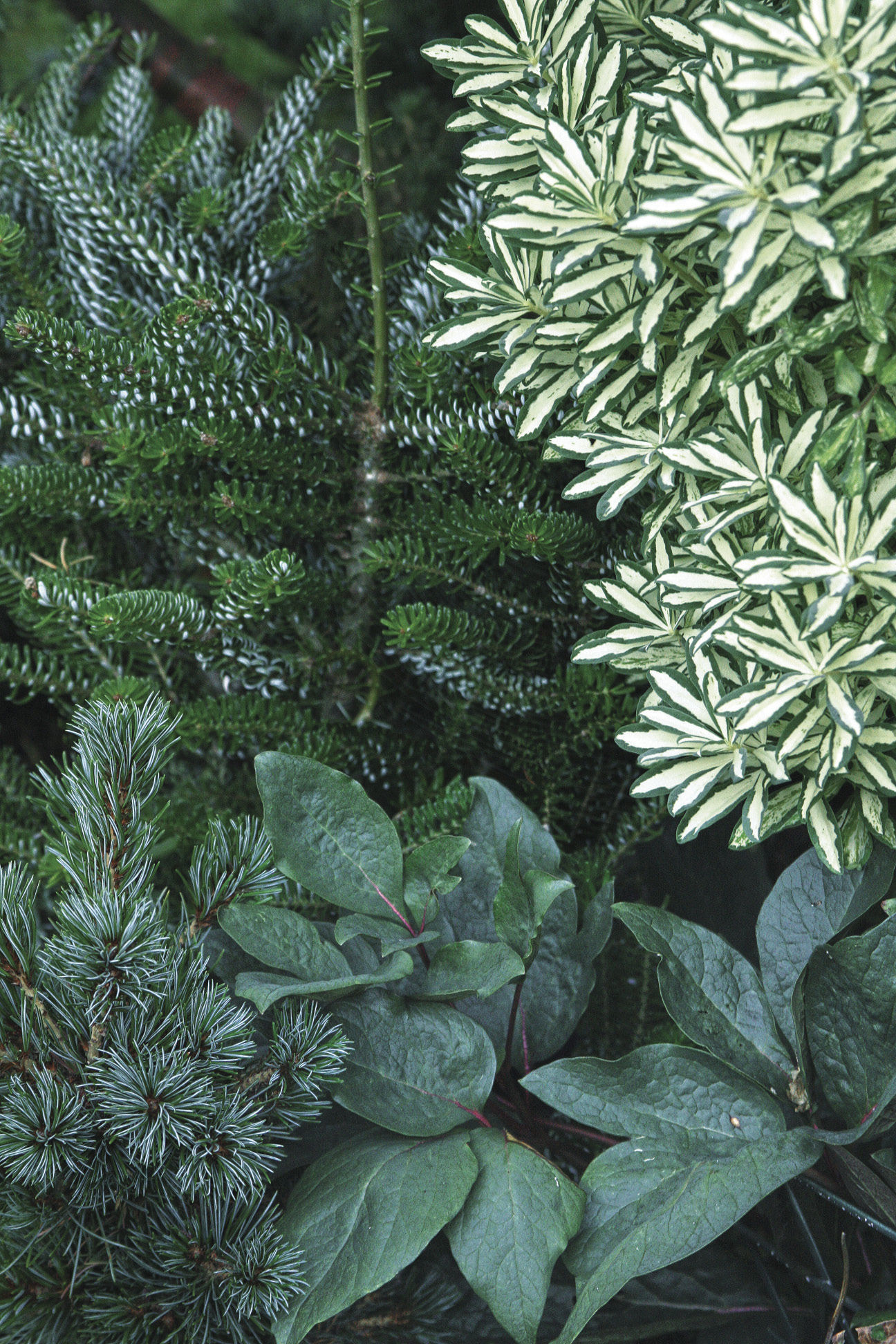 Conifers include a wide array of plant types, all with different needles, that respond differently to pruning. When you prune largely depends on the conifers you have.