Lessons Learned From a 25-Year-Old Garden

Mary and Lew Reid never looked back after abandoning a beautiful established garden to start from scratch. But when you’re moving from a densely shaded garden at the foot of redwoods to a sunny mountaintop locale, there isn’t much to regret from a gardening standpoint. The couple made a pact not to start a garden for a full year—taking that time to formulate a plan that would turn the fallow fields surrounding their Sebastopol, California, property into a magnificent landscape. Over the 25 years since its inception, the garden continues to evolve and to teach them daily lessons about design and maintenance. I sat down with the couple to discuss how their space became the ultimate designers’ classroom and to find out what their garden can teach others about their own beds and borders.

Is there anything that you regret doing—or not doing—in your garden?

Mary Reid: Not planting a series of fastigiate plants at the beginning. As you stand out on our patio, you look out to this beautiful scenery, and it was tempting as a gardener to plant things that would grow tall and block the view. But it was really important to me to preserve the view, so I felt that the whole center of the garden had to remain under 5 feet tall. I could have—and wish I had—used a series of fastigiate plants that would be like exclamation points throughout the garden and would draw the eye upward and out onto the landscape beyond. Preserving a view doesn’t mean you need to ignore taller plants completely.

Lew Reid: I think the worst mistake that we made was putting a ground cover—bearberry (Arctostaphylos uva-ursi, USDA Hardiness Zones 2–6)—rather than a lawn in front of the house. Once the grandchildren came, they had no place to play.

Mary: Water scarcity is an issue everywhere, and that’s why I didn’t put a lawn into our original plan. But I’ve come to realize that everybody can use a tiny speck of lawn—just to sit on or do a summersault on.

You’ve always kept diligent plant records. Is that some­thing that is important to the success of a garden?

Mary: Every time we buy plants, I run in and put them on a source list, and every time we put them in the garden, I put them on the garden list—because, no matter the garden size, you forget really quickly what’s what. If a plant disappears, as they occasionally do, I can easily find out what it was, where it was, and maybe go try to find it again—or not. Sometimes, the list serves as a reminder of what not to buy. You think you’ll always remember, but as the years pass and the garden gets fuller, you don’t. Trust me.

Do you have any tips or tricks for maintaining the bane of most gardeners’ existences: neat edging?

Mary: I’m not really big on edging. In the beginning, I kept the paths and edges crisp, and as things grew out, I kept them trimmed back. But then I began to enjoy the softness of the plants spilling onto the paths and beds, blurring the edges. That strategy only works, though, if your design has crisp geometry. This whole garden is a series of true circles and true rectangles. If there are curves, they’re real arcs, not just wobbly lines. So when the plants start to fill out, that softens the geometry.

Remember, though, to make garden paths no less than 4 feet wide because, by the time you get both sides contributing to the spill, you don’t have more than 2 feet to walk in. Then you have to look down while you’re walking, instead of looking at the garden. 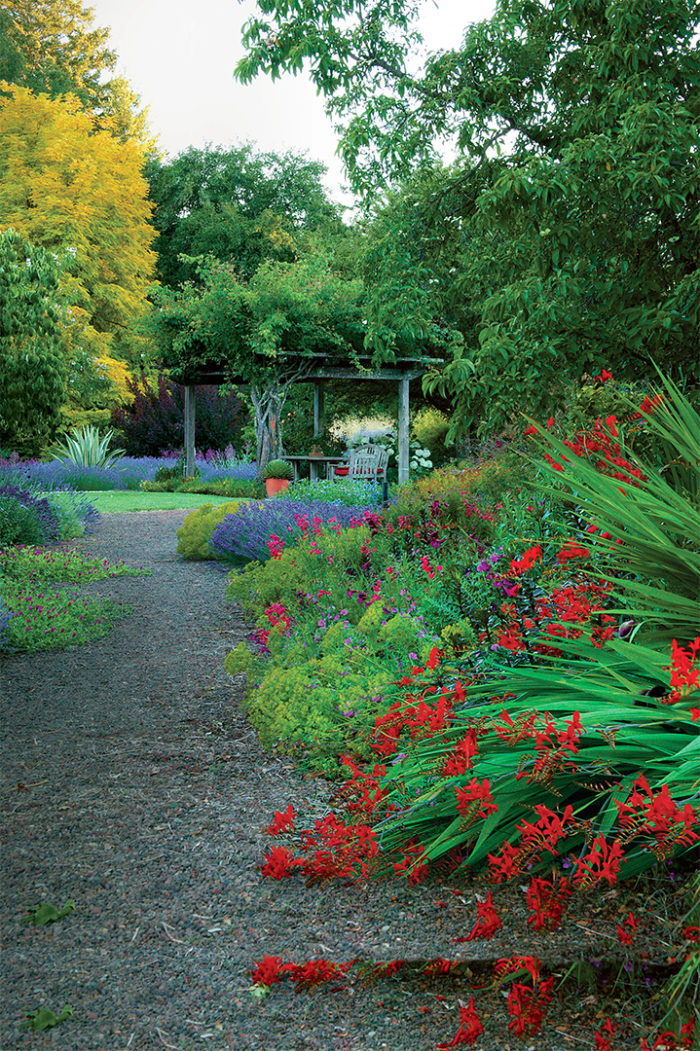 What keeps you motivated to continue gardening in the same space?

Mary: Because we live here! Any garden is a challenge. But I think there has been a shift. I have backed off of being as compulsive about the garden, which I was for 20 years—out there every day and making lists. It was my only creative outlet. Now that I have other creative outlets, like painting, the garden is actually more enjoyable to me than it was before because I’m not feeling so compulsive about it. I can enjoy the garden more. That’s something I have only realized over time—and I think a lot of gardeners fall into the same trap.

Lew: Finding new plants on our travels and even just at the local nursery has helped keep things fresh, too. We’ve also propagated thousands of plants ourselves. When you get new and interesting plants, you need to find a space to integrate them into the garden and give them their just due.

Mary: Every year, different areas of the garden are being redesigned.

And is that from necessity or just from . . .

Mary: That’s just part of having an older garden. It’s always going to need to be upgraded.

Lew: For instance, when we first started the garden, we pur­posely installed some plants that were going to grow quickly and make a show, like the euphorbia (Euphorbia characias ssp. wulfenii, Zones 7–10), and they weren’t appropriate later. You can’t be afraid to use those fast fillers, but you need to remember that they aren’t going to be part of the design forever, either.

Is maintenance an important design consideration?

Mary: The initial design of a garden is mainly about plant placement and hardscaping. Maintenance is really above all after the garden is in. And that’s where it falls apart for most people because this includes replacing plants appropriately when needed—maybe even changing them if they’re not doing the job that you envisioned. This basically means changing your original design.

Lew: The hardscape design may be permanent, but the plants really are ephemeral. And they have to be changed. They can’t stay the same.

Mary: They’re not pieces of furniture. They do have a life of their own, and they have a mind of their own. They do things that you don’t expect them to do. If you don’t like that, you can change it.

Isn’t it hard, then, to get a cohesive look?

Mary: You’re not always changing out everything—just a little here or there. But that brings up an important design principle I’ve learned: Unless you want a collector’s garden, where there’s one of everything, use sweeps. Put in five plants of one kind instead of one, then repeat it somewhere else. You don’t need to have a huge garden to do this, either; you may just need to scale back the size of the plants you use. Then, when you need to replace one or two under performers, it’s not as obvious.

What’s the biggest mistake designers make when planning a garden?

Mary: Betraying their own vision of the garden. You should enjoy introducing new plants and colors but then stand back and decide if this new direction is enhancing the entire scene. If it isn’t, have the courage to remove it. Taking plants out is as important as planting them. There are always other—possibly better—choices that can contribute to the magic of your space.

Make a map of the irrigation and electrical systems

Before you or anyone else digs a trench or lays a pipe for irrigation or electricity, make a detailed plan of where that stuff is located and always have it handy. We’ve used that piece of paper a million times—when things have gone wrong or when we’re trying to plant large trees. That map was the smartest thing we did when designing our garden.

Don’t be afraid to change your mind

The English garden movement was popular in the 1990s and influenced our initial garden design. Several years later, we started to notice in books and magazines a lot of hot-colored combinations: pairings of oranges, purples, and reds. So we made an abrupt change and got rid of many of the pastels, which didn’t look great in our harsh California light anyway. Was it a lot of work to switch directions? Yes, but it led to a better-looking garden in the end. 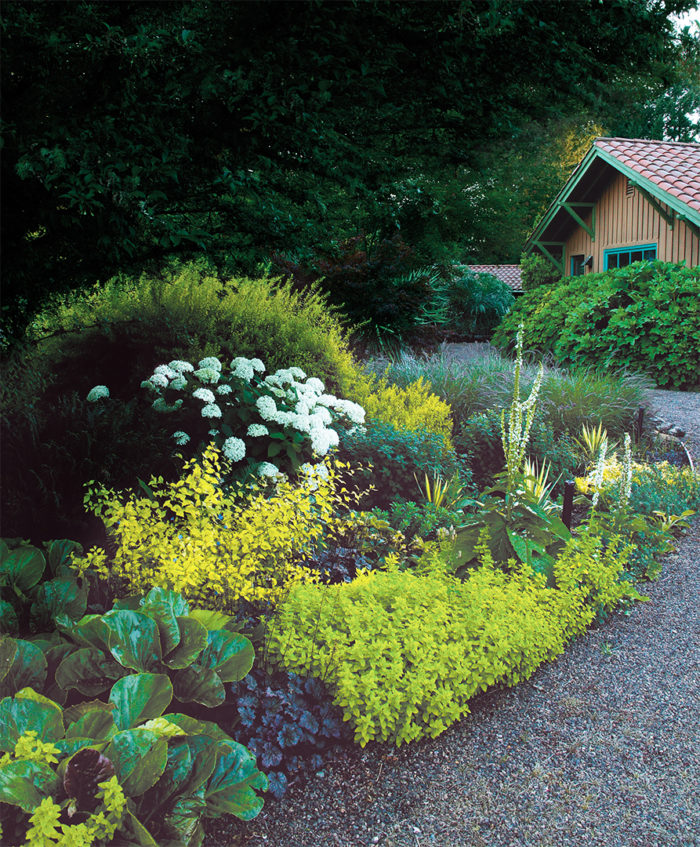 Amending the soil—before planting and on a yearly basis thereafter—is crucial. Our soil tends to be more clay, so we brought in turkey manure to improve the texture; that got expensive, so we switched to duck manure. Every year, we top-dress with compost and mulch. There are no tricks to making this process easier: It’s backbreaking work. But it helps keep down the weeds and contributes to the nutrition of the soil.

If you’re like us, you may look at your newly designed garden and think, “How am I going to keep this weeded for two years with all these little tiny plants?” Don’t, under any circumstances, install landscape fabric. It was a nightmare using it, and it was a nightmare getting rid of it. Every time you want to plant something, you have to get your scissors out and cut a hole in it. And it doesn’t suppress weeds if you mulch over it because the weeds grow right on top. We started taking it out of our garden after the first year, but every once in a while, we start digging and we still see some remnants.