Create a Garden with Cohesiveness

Have you ever noticed that the best gardens have a seamless continuity? These spaces, which are often featured in gardening books and magazines, always seem to flow together beautifully because of the similarities that the plants in the various beds and borders share. Focusing on similarities, however, is contrary to some design principles that tell you to use contrasting colors, shapes, and texture to create interest. So what are gardeners to do if they want a cohesive yet enthralling space? For Pam Frost, an avid gardener from Vancouver, British Columbia, the answer came when she focused first on creating harmony and then randomly added dashes of contrast. The end result, much to her delight, was a truly well-designed space.

To achieve a perfectly blended look that’s not boring, Pam creates repetition in a unique way: using a big brother/little brother design technique. She selects a favorite plant that is on the large side (big brother) and then finds a smaller sibling for that plant (little brother). The smaller sibling has at least one trait similar to the big-brother plant, such as variegated leaves or a weeping habit. Pam then creates curved beds to aid in the placement of the siblings. This methodology works well whether you have an established landscape or you’re starting from scratch. And this approach even makes plant selection easier, which can be an overwhelming task.

Pick your stars and then find them a sibling

Sibling plants are two plants—not of the same genus—that share at least one strong common characteristic. This can be a color, a texture, or a shape, but the siblings should always be different sizes. If the sibling plants have the same stature, they can look like the exact same plant from a distance and the garden won’t look varied. A good example of a sibling pairing is Miss Willmott’s ghost (Eryngium giganteum, USDA Hardiness Zones 4–9) and ‘El Nino’ hosta (Hosta ‘El Nino’, Zones 3–9, top photo). The plants share a nearly identical silvery blue coloring and tolerate similar sun and soil conditions, although one is only a foot tall and wide and the other is three times that size. Sibling plants are a way of achieving repetition in the garden without using the same plant over and over. 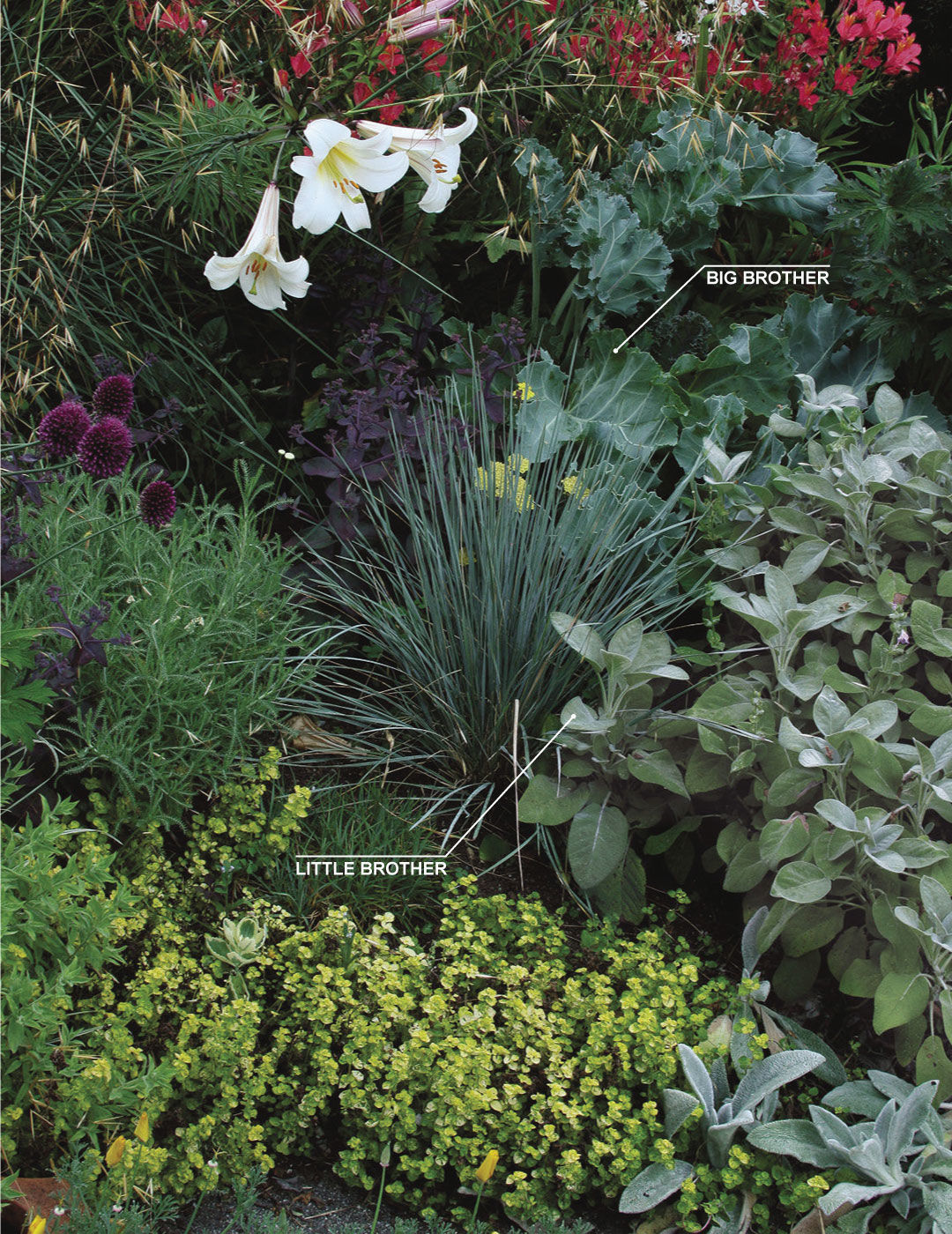 From afar or up close, you can usually tell that these special plant pairings are somehow related. But they are not twins—which is important because it opens up the plant choices to a greater range of options. Just like siblings, though, someone always comes first. Start by picking a handful of favorite plants that meet your conditional needs, then search out a brother for them. For Pam, one of the first trees she longed for was golden locust (Robinia pseudoacacia* ‘Frisia’, Zones 4–9). It was perfect for her garden because it was fast growing and added some much needed structure to the new space, and its yellow hue helped differentiate it from the darker evergreens surrounding the property. Once that big brother was settled on, finding a little brother was easy. Golden variegated privet (Ligustrum japonicum* ‘Variegatum’, Zones 7–10) is a medium-size shrub that has a similar color and leaf shape to the golden locust; it was a perfect choice for filling in the rear of the beds because, although it was smaller than the locust, it was still taller than the perennials. 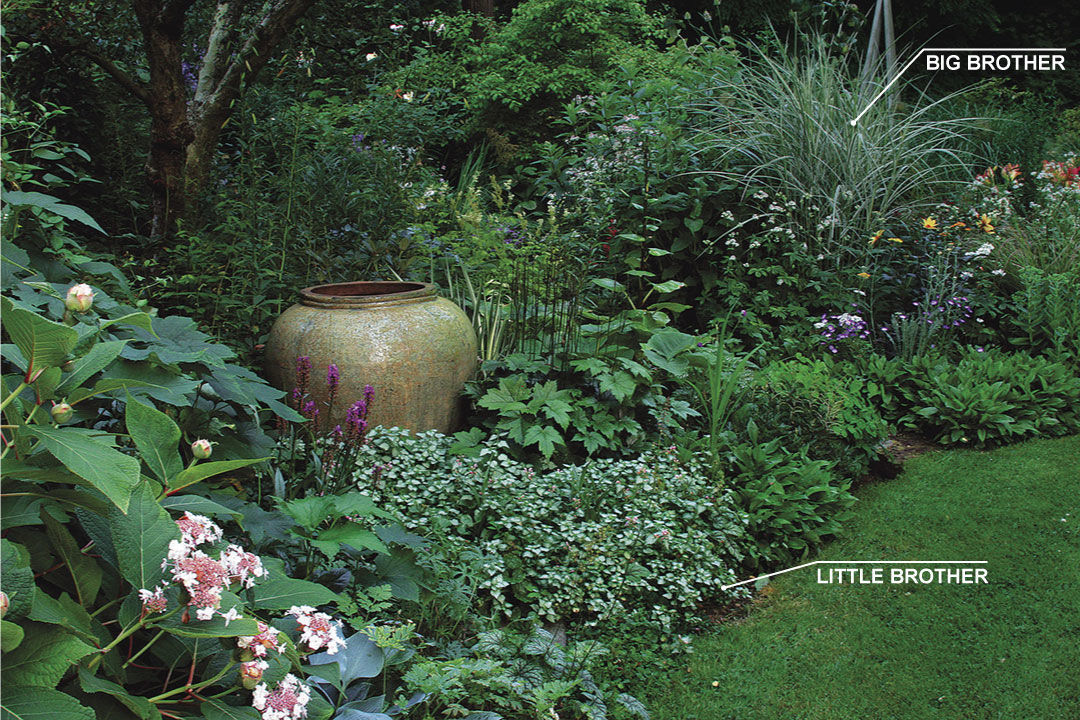 Pam occasionally takes things one step further and finds an additional little brother that is even smaller. In this case, she sporadically planted golden oregano (Origanum vulgare ‘Aureum’, Zones 4–9) along the edges of certain beds. This sibling has a similar hue and leaf shape as the locust and privet but is much smaller. From a distance, the eye travels from one sibling to the next with ease, giving the large garden overall cohesiveness.

Placement is made easier by curving the bed lines 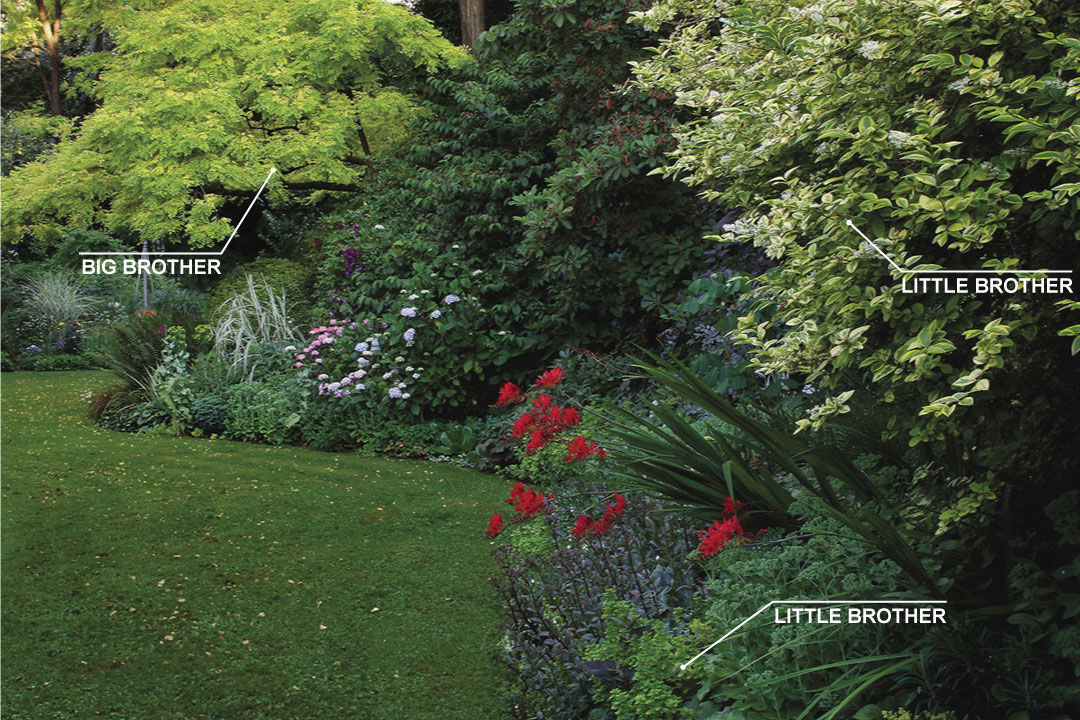 For Pam, creating curved bed lines grew out of necessity. When she and her family first moved to their city lot, the property only had a stretch of grass running down the middle. With small children and a puppy, they clearly needed to fence in the space. But this made the expanse look, inevitably, like a narrow bowling alley. To make the space seem larger, Pam decided to swing the axis from side to side, creating two long sinuous garden beds. As time passed, she gradually pulled out the borders, using a hose to help her keep a flowing line during the redesign. This ultimately led to larger, deeper beds, creating space for more plants. To fill in the borders, Pam used a ratio of 30 percent sibling pairings to 70 percent stand-alone plants. Any more siblings and the repetition would have been too much, making the garden look too much the same. Any fewer siblings and the garden would have ended up being a tossed salad with nothing tying it together. 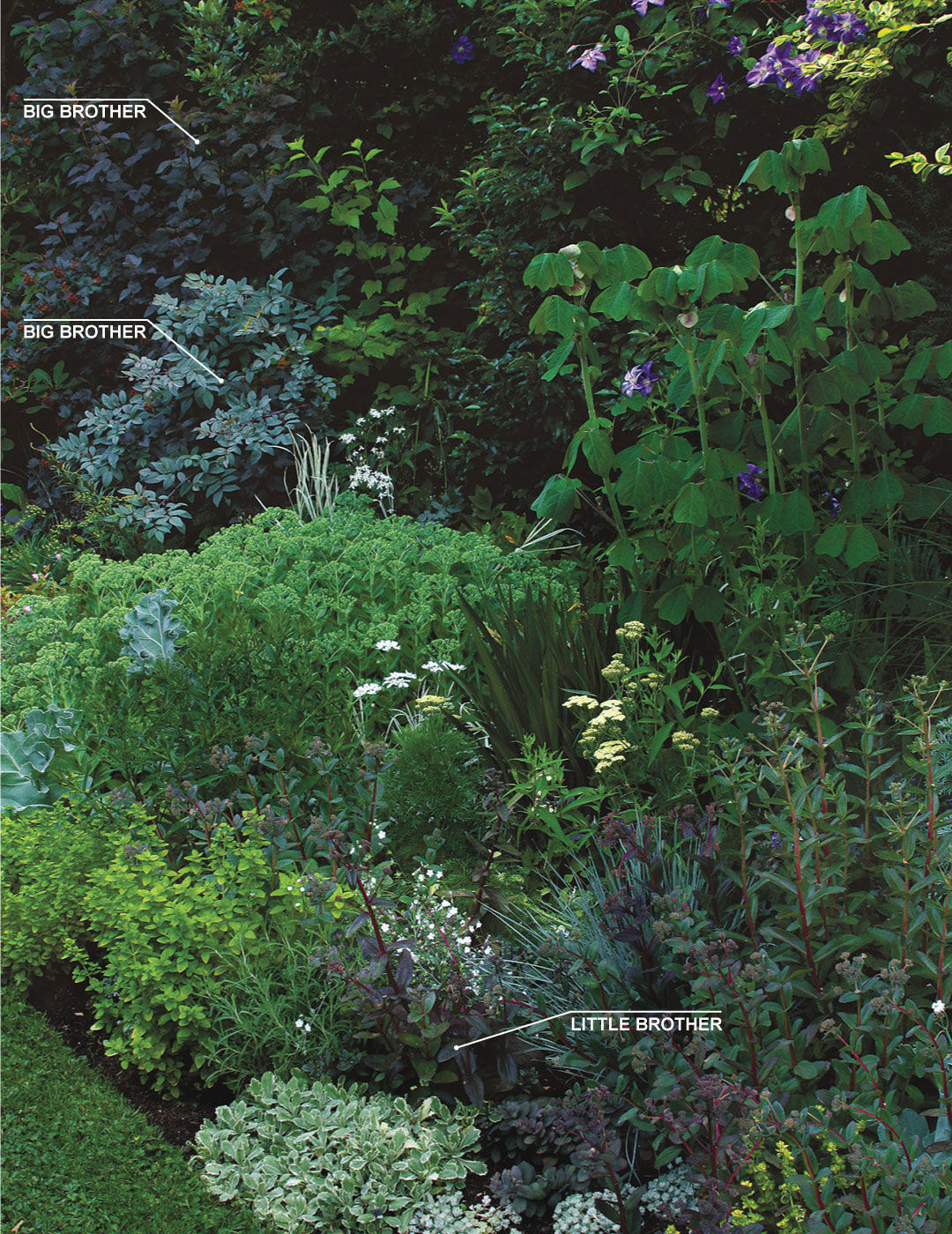 When Pam needs to fill holes, she walks around the garden with a new plant and tries to figure out which siblings it might fit in with. Placing a bunch of family members right next to each other would look like a police lineup, with too many similar plants sitting too close together. Scattering the pairings throughout the beds, instead, gives the garden a diverse yet cohesive look. By curving the bed lines, you can stick siblings close together without them being right on top of one another. Make sure that the siblings are at least a few feet away from each other—several feet is even better. That way, as you travel along the edge of the beds and pass every curve, you feel as if you’re experiencing a new part of the garden. And when you come across a big and then a little brother (or vice versa), it reminds you that this is, indeed, the same space.

More than 20 years later, the beds in Pam’s garden still have an amazingly varied yet perfectly blended look, proving that this design technique can help any garden go the distance.

Some Favorite Big and Little Brothers

Danielle Sherry is a senior editor who wishes her gardens looked as marvelous as those of Pam Frost.