When designer Adam Woodruff was hired to create a landscape for a newly renovated home in Illinois, the existing site was mostly turf with a swimming pool surrounded by a concrete apron, all amid a rural setting with views of the surrounding pastures and woods. The home owners wanted to preserve the view and seamlessly blend their home into its surroundings. Adam wanted to create a different take on a meadow, with a clear formula that takes away the ambiguity to which a planted meadow can often succumb. He did so by carefully selecting palettes of low-growing, low-care, sturdy grasses and perennials that he wove together in an artful pattern—or matrix—punctuated by contrasting and taller accent plants to direct the eye. The result is a calming, gorgeous view, which attracts pollinators, birds, and wildlife to the home owners’ doorstep.

Low-growing plants serve as the base layer

Adam’s first job was to choose a palette of plants as the base level for each area. In a nod to the surrounding pastures, he selected grasses first and then perennials with similar cultural needs and a wide range of bloom times to keep the plantings interesting and colorful throughout the seasons. Texture was also an important factor, and Adam was sure to include a subtle variety in each palette. The plants had to be roughly the same height to create a uniform mass. They had to be not only tough, drought tolerant, and well suited to the existing conditions but also not so aggressive that maintenance got out of control. Adam chose native species whenever possible to keep the garden from looking and feeling out of place against the backdrop of pastures and fields. After fine-tuning a palette, Adam evenly distributed and planted his selections in a gridlike pattern, spacing the plants 18 inches apart so that they grew together quickly to achieve a full look.

To add a bit of variety to the now-established base-level plantings, Adam dotted the landscape with a few con­trasting plants. Tall, airy ones, like ‘Transparent’ moor grass (Molinia litoralis ‘Transparent’, USDA Hardiness Zones 4–8), act as veils that create a bit of mystery within the planting, while those with a boldly contrasting form or color, like ‘Autumn Bride’ heuchera (Heuchera villosa ‘Autumn Bride’, Zones 5–9), add a dash of excitement.

With the base level and its punctuation plants in place, the next step was to add some strategically placed taller perennials, shrubs, and sculptures, which would break the horizontal plane formed by the base-level plantings and serve as focal points, directional cues, and tools to lead the eye toward views or away from visual obstacles. For plants, Adam chose primarily those that can be cut to the ground each year to ease maintenance, such as ornamental grasses; tall, vertical perennials, like Joe Pye weed (Eutrochium spp. and cvs., Zones 3–11) and Culver’s root (Veronicastrum virginicum and cvs., Zones 4–8); and shrubs that can be drastically pruned, like smoke bush (Cotinus coggygria and cvs., Zones 5–9) and sumac (Rhus spp. and cvs., Zones 2–10). These tall plants are sometimes placed individually or arranged in blocks of one species, but Adam often chose multiple species to plant in a group to create a dynamic vignette within the matrix. Sculptures provide valuable year-round structure and serve as striking focal points, especially during the winter months.

Adam is quick to point out that this is not a design strategy for gardeners who like a plant-it-and-done garden. This approach involves constant tweaking and assessment, which he thinks is part of its charm. Selecting a palette of plants and using them in a matrix arrangement simplifies garden design and increases the probability of success, but it is also just a beginning—a foundation for future experimentation and fine-tuning. If you’re willing to roll with the punches, it might just be the most fun you’ve ever had creating a garden.

Watering: While almost all of the plants in the various palettes are drought tolerant, the garden does include an extensive irrigation system that compensates during dry spells and helps establish new plantings.

Mulching: Adam planted the matrix thickly, so applications of mulch to keep weeds down are unnecessary. Each year in late winter, everything is cut back, usually with a high-powered weed trimmer or mulching mower. The trimmings are either raked up and composted or allowed to stay where they fall to serve as a natural mulch that breaks down quickly and enriches the soil. If the matrix were planted a little less closely, Adam says that he would use a leaf-mold mulch rather than a wood mulch so that it would break down quickly, as well.

Weeding: As the plants begin to grow in spring, weeds are regularly pulled until the intentional plants fill in. Weeding then becomes an occasional chore.

Fertilizing: Fertilizer is used only on the seasonal annuals that are added here and there within the design.

Tweaking: As the season wears on, Adam con­tinually assesses the design, making notes of adjustments and additions he’d like to make to the design.

Once you understand the basics of matrix planting, creating one of your own will be a fun and rewarding exercise.

A. Base-level plants serve as a foundation

A mix of plants with similar textures and heights form the base level of the design. But a matrix planting changes throughout the season. Ornamental grasses, for example, integrate almost invisibly into the foundation layer early in the season, but when they bloom later in the season, the grasses will create a substantial presence.

B. Punctuation plants add some spice

Plants with a differing height, texture, or color act as a contrast to give the base layer a bit of excitement. Some plants start the season as part of the base layer and transition into a punctuation role. The fine-textured foliage of Russian sage, for example, blends into the base layer early in the season, but as the plant begins to bloom, it grows taller than the surrounding plants and forms striking blocks of color, making the plant a punctuation.

A focal point serves as a place for the eye to rest, adds a level of excitement, and leads the eye to exceptional views. Both plants and hardscaping can serve as focal points, but plants used as such should be more substantial or visually striking than those used as punctuation. 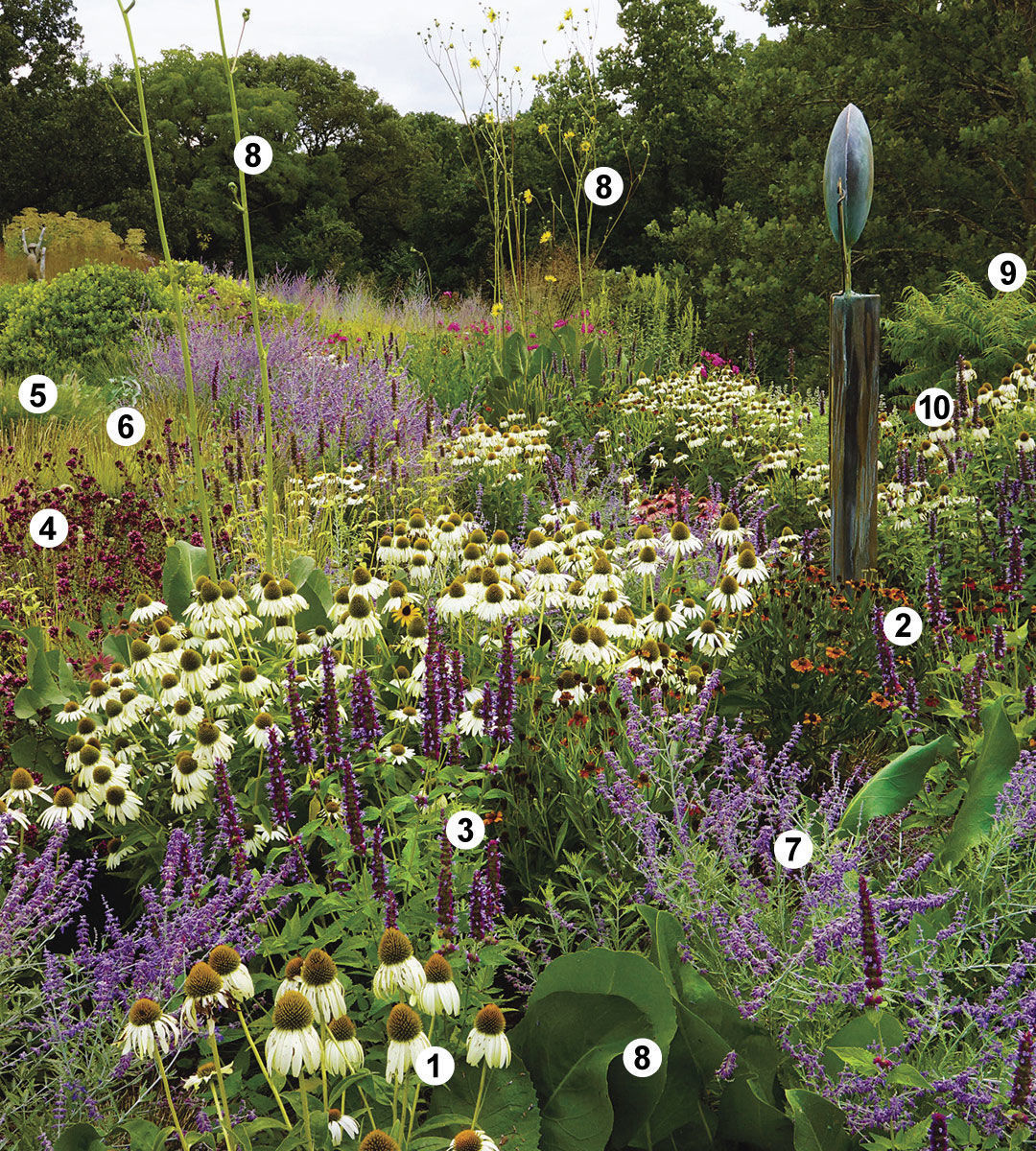 Michelle Gervais is a senior editor.