The Best Plants, Only Better

You might think there are no substitutes for several tried-and-true perennials, but there are

The gold standards—when it comes to plants—are a handful of varieties that have proven their worth over many years. Their names, like Rozanne geranium, are almost as familiar as the names of our children. There is nothing better than these garden stars—or is there? Some of us have become complacent when it comes to certain plants, settling for what’s familiar over what might actually be a better alternative. The following eight plants are ones that you should be growing instead of the so-called oldies but goodies. Infusing your garden with this new pack of platinum substitutes will lead to lower maintenance and overall better looks.

A supersize geranium with a better shape 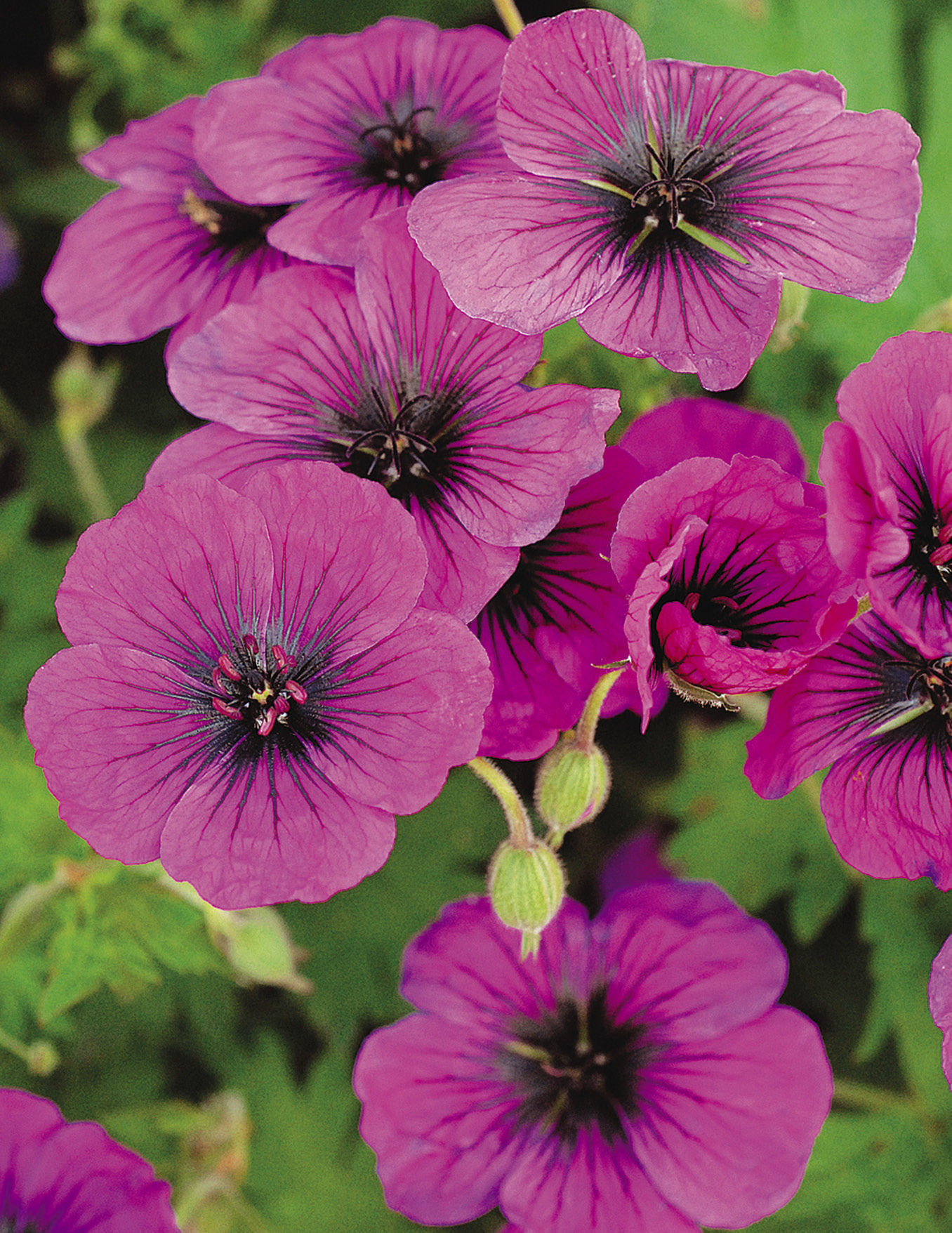 Taking away Rozanne geranium’s crown might seem, to some, like an act of horticultural treason. After all, it is a long-blooming perennial that has filled the gaps in gardens for decades—without asking for much maintenance in return. One drawback of Rozanne, though, is its unruly habit. By midseason, instead of sprawling happily, it takes on more of a leggy appearance. If you want a geranium with a similar gap-filling ability but that keeps an attractive habit year-round, try ‘Dragon Heart’. The leaves are similar to Rozanne but twice the size—as are the flowers, which are a vibrant magenta. Accepting of lean soils and somewhat drought tolerant once established, this geranium can play an excellent supporting role in beds and borders or, because of its size and long-lasting flowers, step up as an unexpected focal point.

More silver on the leaves makes this lungwort tougher 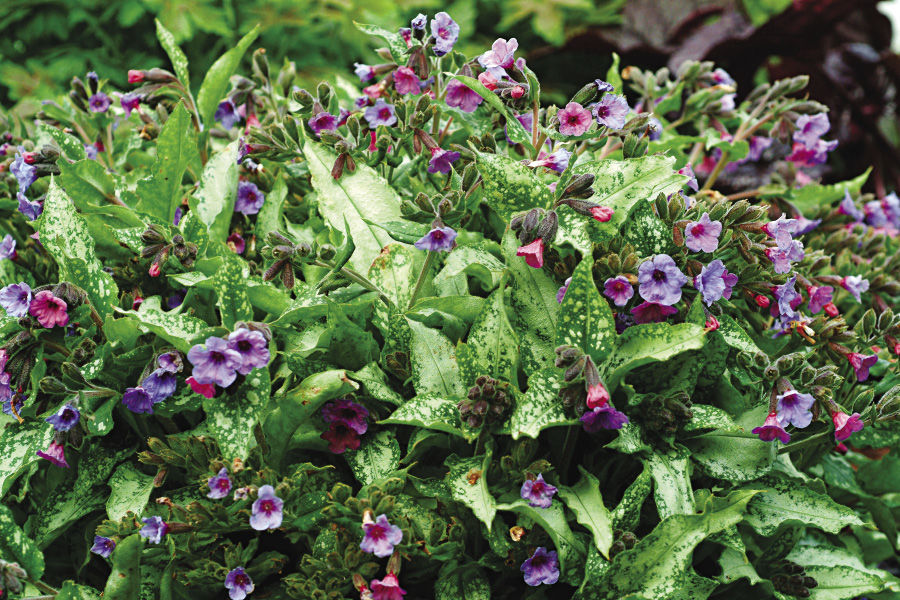 Among the first plants to bloom each spring, lungworts are known for their jewel-toned blossoms and their silver-mottled foliage. Classic cultivars, like ‘Mrs. Moon’, have only a smattering of gray spots on their leaves, while newer versions are more silver than green—and this development matters for more than just aesthetics. A plant trial conducted by the Chicago Botanic Garden found that the more silver the lungwort foliage has, the less likely it is to get pH-induced chlorosis. Additionally, cultivars with heavily silvered leaves, like ‘Silver Shimmers’, hold up better to heat and generally don’t go dormant in summer. All of this toughness doesn’t mean, however, that the clear blue and pink flowers are sacrificed—they are just as beautiful as those of ‘Mrs. Moon.’

This peony has blooms that don’t flop in the rain 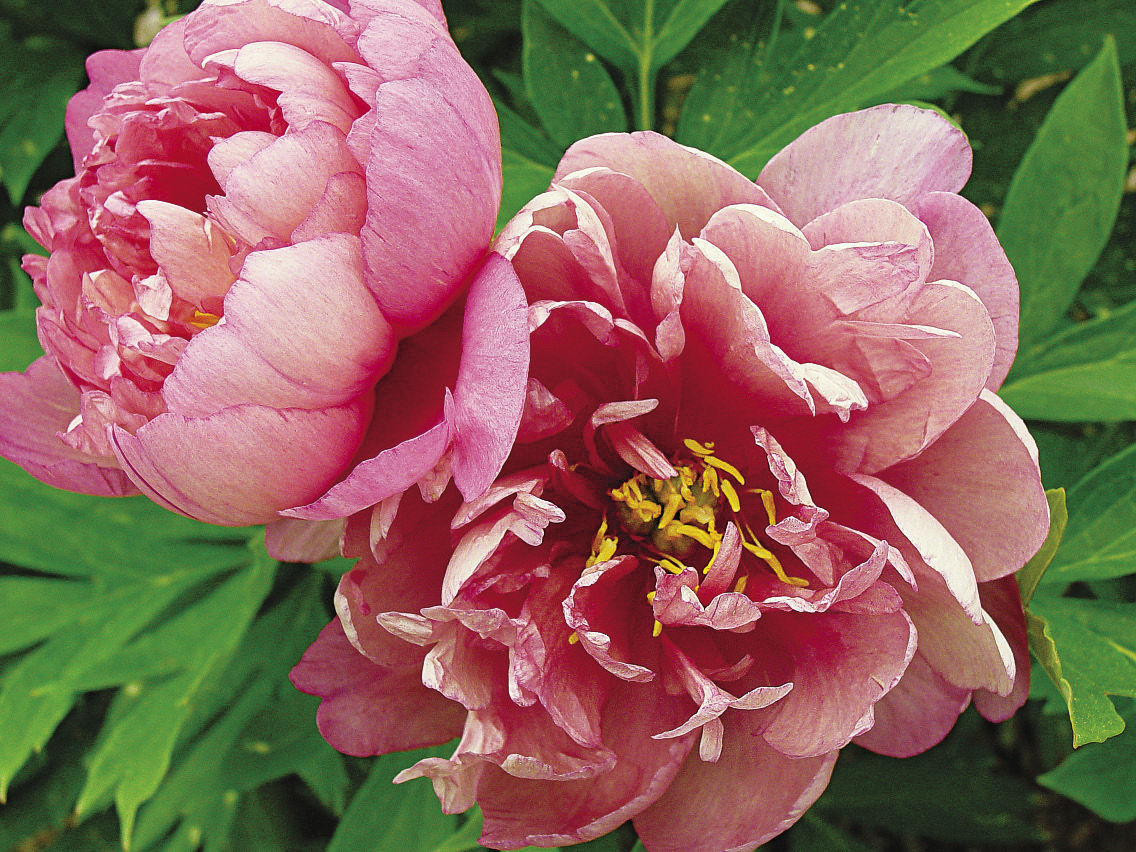 Peonies are classic cutting-garden favorites mostly because their giant, puffy blossoms have no rival in a vase. Their big flowers, like those of ‘Sarah Bernhardt’, unfortunately flop to the ground after any rainfall or even a heavy dew (and get coated in mud or mulch in the process). Itoh peonies, on the other hand, offer huge flowers that are held on strong, tree peony–like stems. The variety Keiko™ has a blush hue and light fragrance similar to that of ‘Sarah Bernhardt’. Over time, this variety can produce more than 50 blooms per plant, so the only issue you might have is finding enough vases to accommodate daily cuttings. 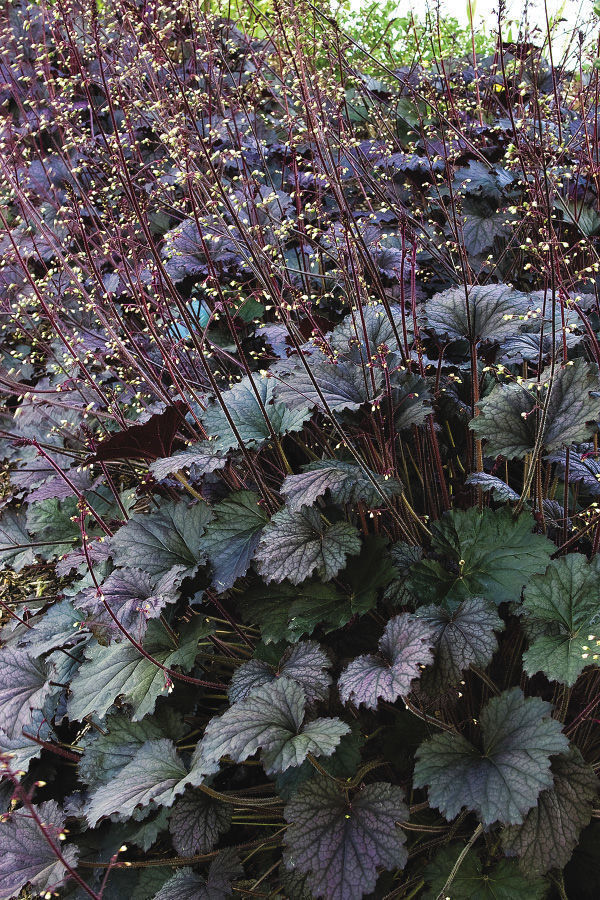 For many years, ‘Palace Purple’ heuchera has been the go-to workhorse of the shade garden. It is tough, tol­erating less than hospitable conditions and even an accidental trampling. Its muddy purple color was never particularly eye-catching, though, and as temperatures drop, the color becomes an unattractive brown. Enter ‘Frosted Violet’, with the same ruggedness but with a bright purple-pink hue that only gets better as temperatures fall. Each leaf is covered in tiny silvery hairs, too, giving the plant a frosted look. Like all heucheras, ‘Frosted Violet’ resents inconsistent moisture and is also prone to frost heave, so be sure to mulch around your plants. 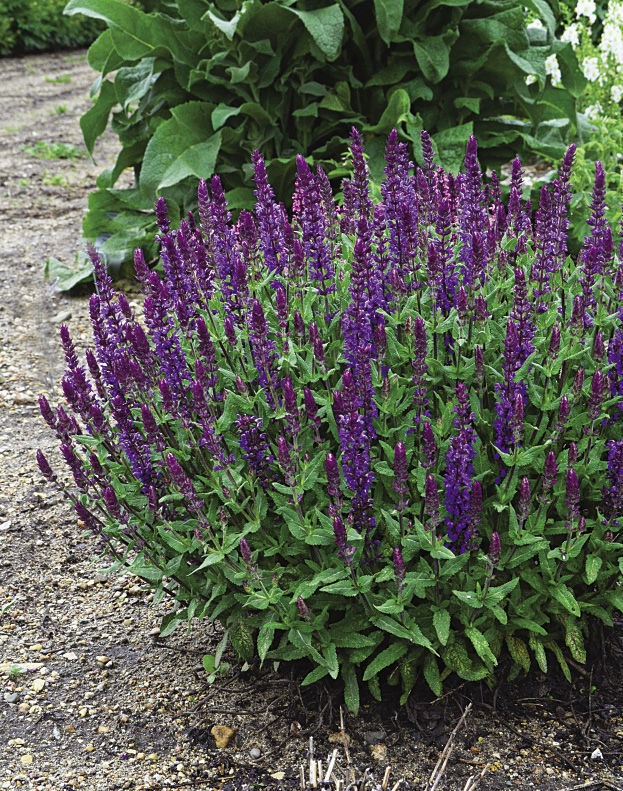 “Ubiquitous” doesn’t begin to describe the overuse of ‘May Night’ salvia. Ten years ago, it seems as if landscapers everywhere decided to plant it into every residential and commercial property they touched. The idea wasn’t terrible—after all, salvia thrives in the leanest of soils. But ‘May Night’ resents prolonged heat, and its lovely purple flowers quickly turn brown when temperatures soar. ‘New Dimension Blue’, however, has blooms that stick around longer during heat waves, and even when the blooms fade, the plum-colored stems are interesting. Unlike other dark-stemmed salvias, ‘New Dimension Blue’ stays compact and doesn’t get a case of floppiness in late summer. Place it at the front of your beds or in a container.

Flowers play second fiddle to the flashy foliage on this astilbe 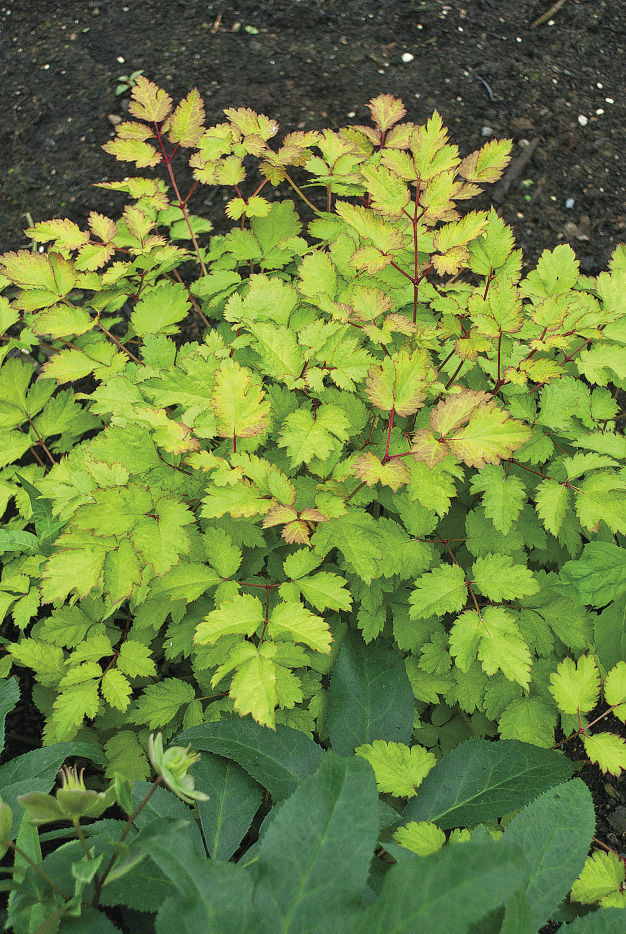 For vibrant color in the shade, astilbes are hard to beat. Their fluffy flowers look like piles of cotton candy perched atop compact, fernlike foliage. ‘Fanal’ has always been especially prized for its fiery red hue. You’d better hope, however, that every spring is long and cool; otherwise, astilbes bloom for a hot minute. Some gardeners in the Midwest and New England, in fact, often resort to spray-painting the spent flower blossoms to fake a longer season of interest. With the chartreuse foliage of ‘Amber Moon’, though, you won’t care if the blooms fade away quickly. The golden leaves can light up any dark nook, and when the bright pink flowers do appear, they just enhance the overall look of this low-care plant.

Get a gorgeous grass without the headaches 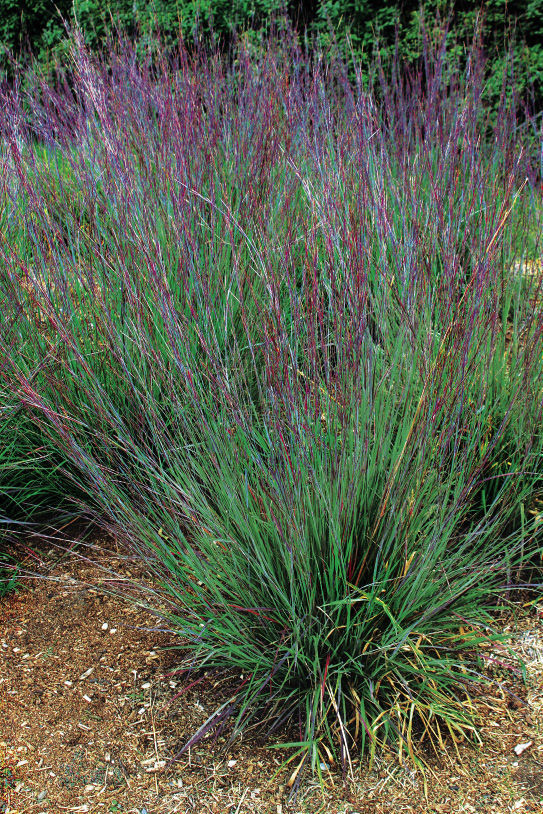 If you’ve ever planted the popular ‘Morning Light’ miscanthus, you know how the relationship unravels. At first, everything is lovely, with the plant establishing itself quickly and without much care. Then, around year three, things get ugly, with the once beautiful grass enveloping its neighbors and taking over the bed it calls home. You need a pickax to perform annual divisions, and before you know it, you’re running a miscanthus nursery. Thankfully, Blue Heaven™ little bluestem is a similarly sized, beautifully colored grass that requires virtually no maintenance and doesn’t flop. The steely blades with red accents shimmer in summer and change to a bright orange-pink in fall. Drought tolerant once established, this grass truly deserves all of the accolades it has recently received.

To say that this helianthus is “bold” is an understatement 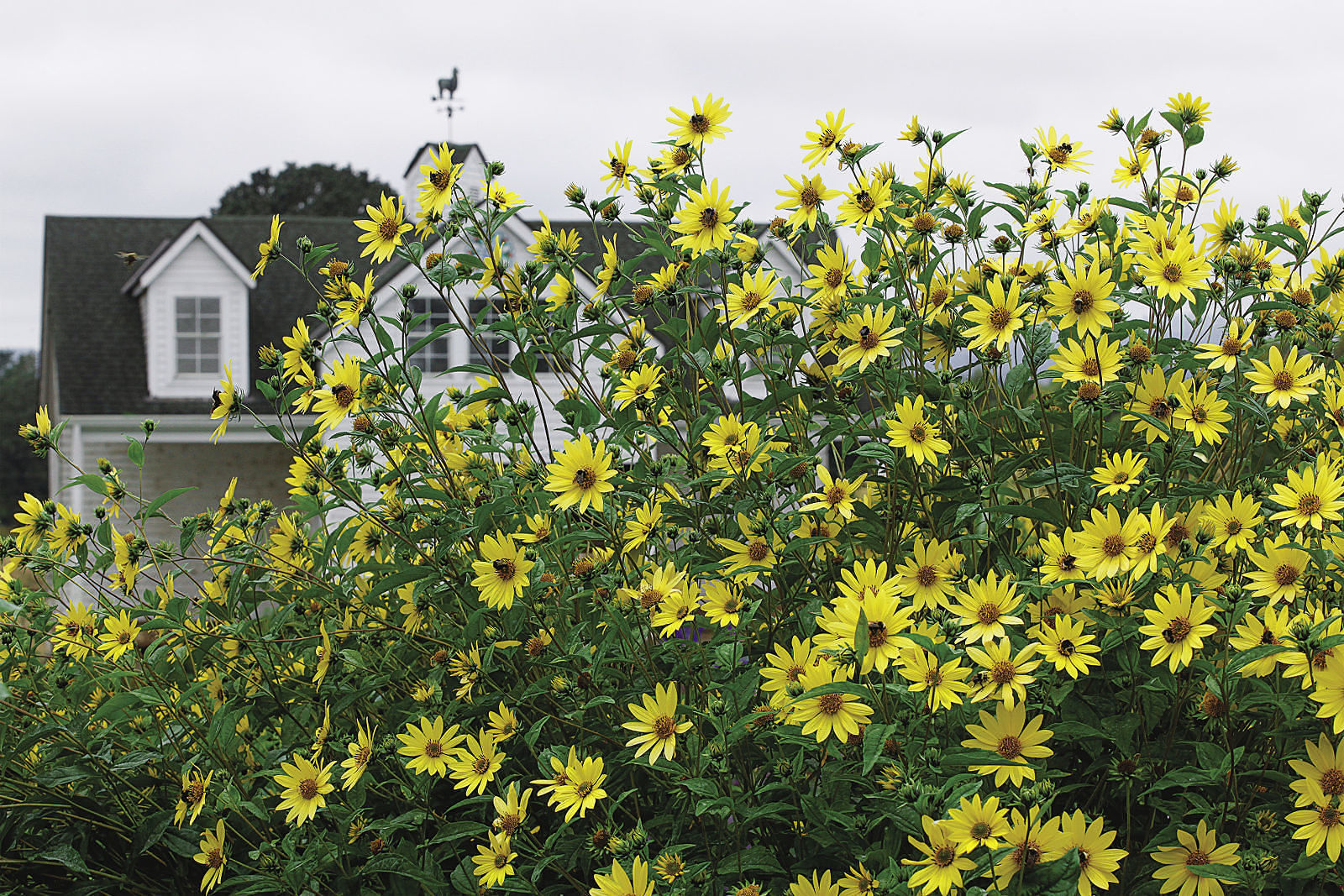 Big, bold, and deerproof sounds like the perfect plant, right? Well, giant coneflower would be if it didn’t flop under the weight of its yellow daisylike flowers each summer. ‘Lemon Queen’ helianthus is giant cone­flower on steroids. It’s bigger, for sure, but it’s also stronger—capable of supporting a plethora of sunflower-like blossoms in midsummer without a single stake in sight. In addition, this plant isn’t susceptible to rust, which can attack giant coneflower. Often called one of the hardiest perennials out there, ‘Lemon Queen’ is best sited toward the back of a border to fully appreciate its boldness—even from a distance.

Even if you’ve got the new standards in plants, they may still underperform if you’re subjecting them to certain environmental conditions that they resent. The following are situations that can cause some issues.

No matter how vigorous a plant might be, if you give it less light than is optimal, it will struggle. If you notice a plant is paler than it should be or is looking stretched out and somewhat leggy, it might not be getting enough light.

Although a plant’s description might say that it “thrives in full sun,” when temperatures soar above 90°F for weeks, even the toughest of plants will start to flag. Just like us, plants get cranky when it’s unbearably hot. You might notice burning foliage or a bleached-out effect on blossoms. The plant should rebound when the mercury drops, but giving it a little shade in the meantime, if possible, is a good idea.

“Drought tolerant” doesn’t mean “no water.” Even so-called xeriscaping plants might need water to get established and on an occasional basis thereafter. If you notice that your plants are failing to size up year after year—or simply petering out in late summer—it might be time to install some irrigation.

Mulch helps suppress weeds (which compete for precious nutrients and water), slows down evaporation, and insulates roots during the winter to prevent frost heave or death. If any of these have been issues in your garden, get some mulch—it’s the closest thing to a “fix all” in gardening.

Get a soil test before planting in a new area. This inexpensive lab analysis will give you a good idea about your soil structure, pH, and nutrient levels. It will also let you know if there are any contaminants present that could cause you and your plants harm. If you’re sure that you’ve given your plant the ideal light, moisture, mulch, and temperature conditions and it’s still failing, chances are that you have soil issues.

—Danielle Sherry is a senior editor.

This site is protected by reCAPTCHA and the Google Privacy Policy and Terms of Service apply.
See all newsletters
Previous: Beautiful, Low-Maintenance Plants Next: Better Versions of Classic Plants
X
View Comments