The Best Plants for Sunny Borders

These workhorse perennials are beautiful and reliable

In my day, farmers valued workhorses for their strong constitutions, good manners, and steady dependability. As a gardener, I appreciate these same qualities in a handful of sun-loving perennials that earn their keep day in, day out, year after year. These plants contribute to the garden from the time they appear in the spring until the end of the growing season and, in some cases, beyond. Each has been in my garden for five years or longer.

None of my eight workhorses requires frequent division, but all welcome it and will provide plenty of extra plants. With the exception of the grasses, all can be divided when it’s convenient, in either spring or fall. Grasses don’t take kindly to being disturbed in the fall, so divide them only in the spring. Since grasses have deep roots, it’s hard work, so do it sooner rather than later.

Although I improve my clay soil with a yearly mulch of chopped leaves in the spring and add compost to each planting hole, it falls short of the ideal of rich loam. Nonetheless, these plants are robust and happy. They are likely to thrive in most garden soils. Include workhorse plants in your border and you’ll have time to fuss with your more temperamental treasures. 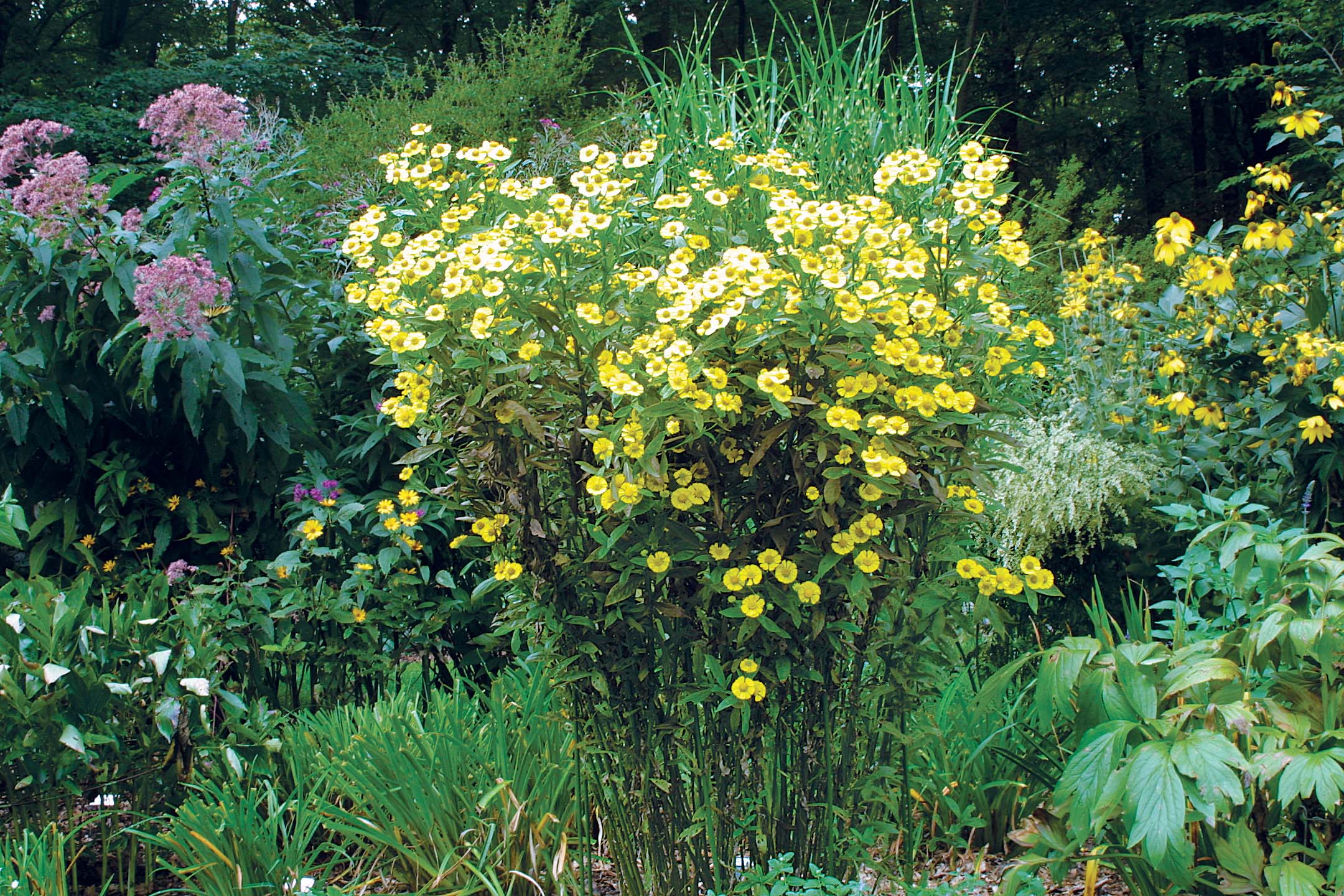 Rudely and unfairly called sneezeweed, Helenium ‘Butterpat’ (USDA Hardiness Zones 4–8) makes the grade for its masses of sunny, yellow flowers in August and September. Other species and cultivars of Helenium come in russet red and in orange, but yellow is my favorite. In the middle to the back of the border, the leafy 4- to 5-foot-tall stems of ‘Butterpat’ support large, loose terminal clusters of 2-inch, daisylike flowers, whose broad, short rays with pinked edges encircle a little knob of disk flowers. In my sloping, not-quite-sunny-enough border, I have to put a girdle of stakes and string around the stems, but on level ground and in full sun, this chore would not be necessary. 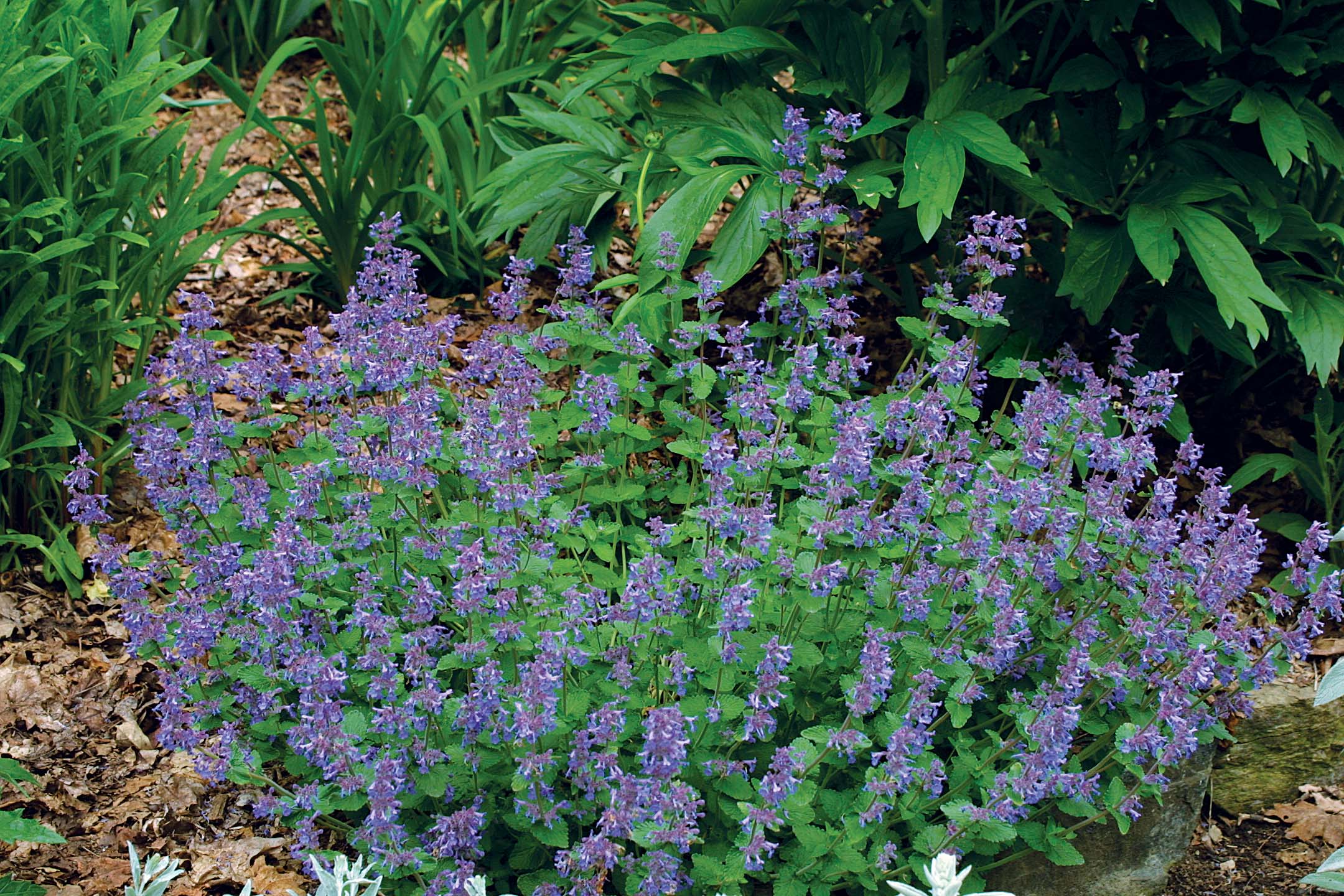 Persian catmint (Nepeta racemosa, Zones 4–8), which has been growing in my garden for over 30 years, was the gift of my gardening mentors, Helen and John Gill. It begins to bloom at the same time as Darwin tulips and keeps going through peony season, sending up innumerable racemes of little violet-blue flowers above a mound of gray-green leaves. The first flush lasts until mid-June, at which point the mound becomes loose and floppy. Shearing with a pair of garden scissors quickly restores order; before long, fresh, leafy stems arise to cover the damage and send up new flower stalks. Intermittent bloom throughout the summer is followed by another substantial flowering in late September. At the front of the border, Persian catmint can be relied on to look attractive for most of the growing season. While I have grown several species and cultivars of Nepeta and enjoyed them all, Persian catmint remains a sentimental favorite.

‘Zagreb’ is a sturdy tickseed 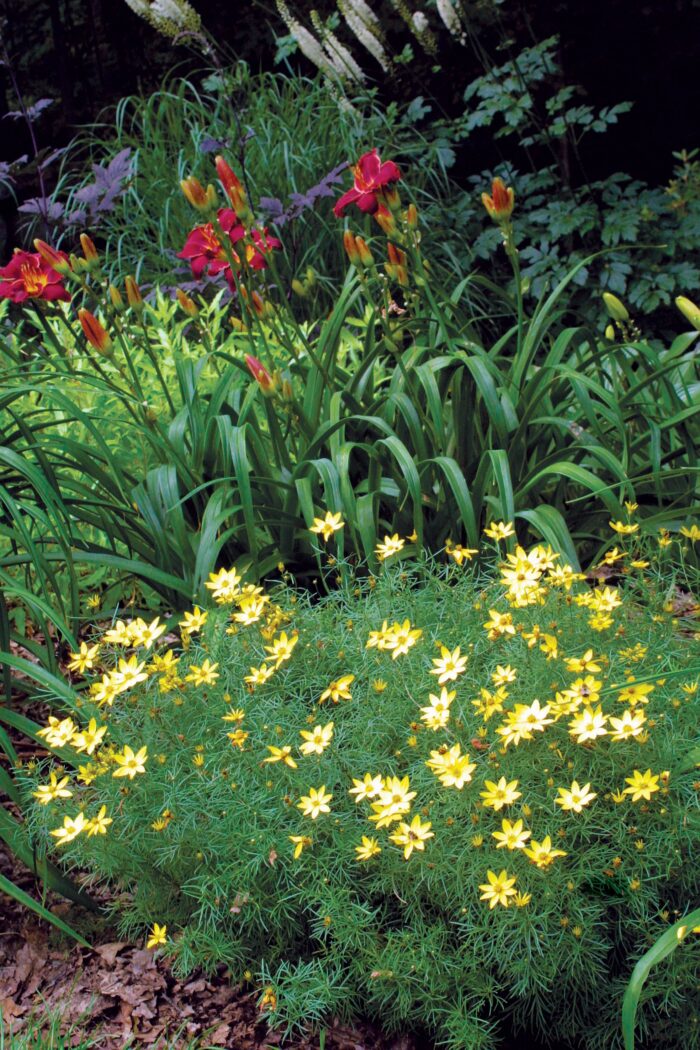 Several North American tickseeds (Coreopsis spp. and cvs.) have earned their place in gardens, but the thread-leaved tickseed (C. verticillata, Zones 4–9) is by far the best. Indeed, the pale yellow cultivar called ‘Moonbeam’ was chosen Perennial Plant of the Year in 1993 by the Perennial Plant Association, but in my garden, the egg-yolk yellow ‘Zagreb’ has displayed a much sturdier constitution. The dense upright stems, thickly set with fine needlelike leaves, spread steadily by underground stolons into large patches, which need a bit of chopping back in the spring. This, to me, does not constitute an invasion. I have clumps at intervals all along the front of my borders. I love its neat, shrubby appearance before and after bloom and delight in its abundance of bright yellow flowers starting early in July and persisting for weeks.

It’s easy to sing the praises of variegated lilyturf (Liriope muscari ‘Variegata’, Zones 6–10). Its impeccable green-striped-with-cream foliage is vibrant and grasslike, but the leaves are wider and more blunt at their tip than grasses. Ideal as an edging plant, a clump runs from 1 to 1½ feet tall and half again as wide. The crisp, virtually indestructible leaves look attractive all season and often well into the winter. Nor are the spikes of small blue-violet flowers anything to sneeze at (right photo). They appear in late September—when few flowers are in bloom—and continue through the middle of October. Another virtue of variegated lilyturf is its tolerance of shade. Indeed, it bleaches out a bit in full sun, preferring morning sun and afternoon shade, and it will put up with moderate to dense shade as well. 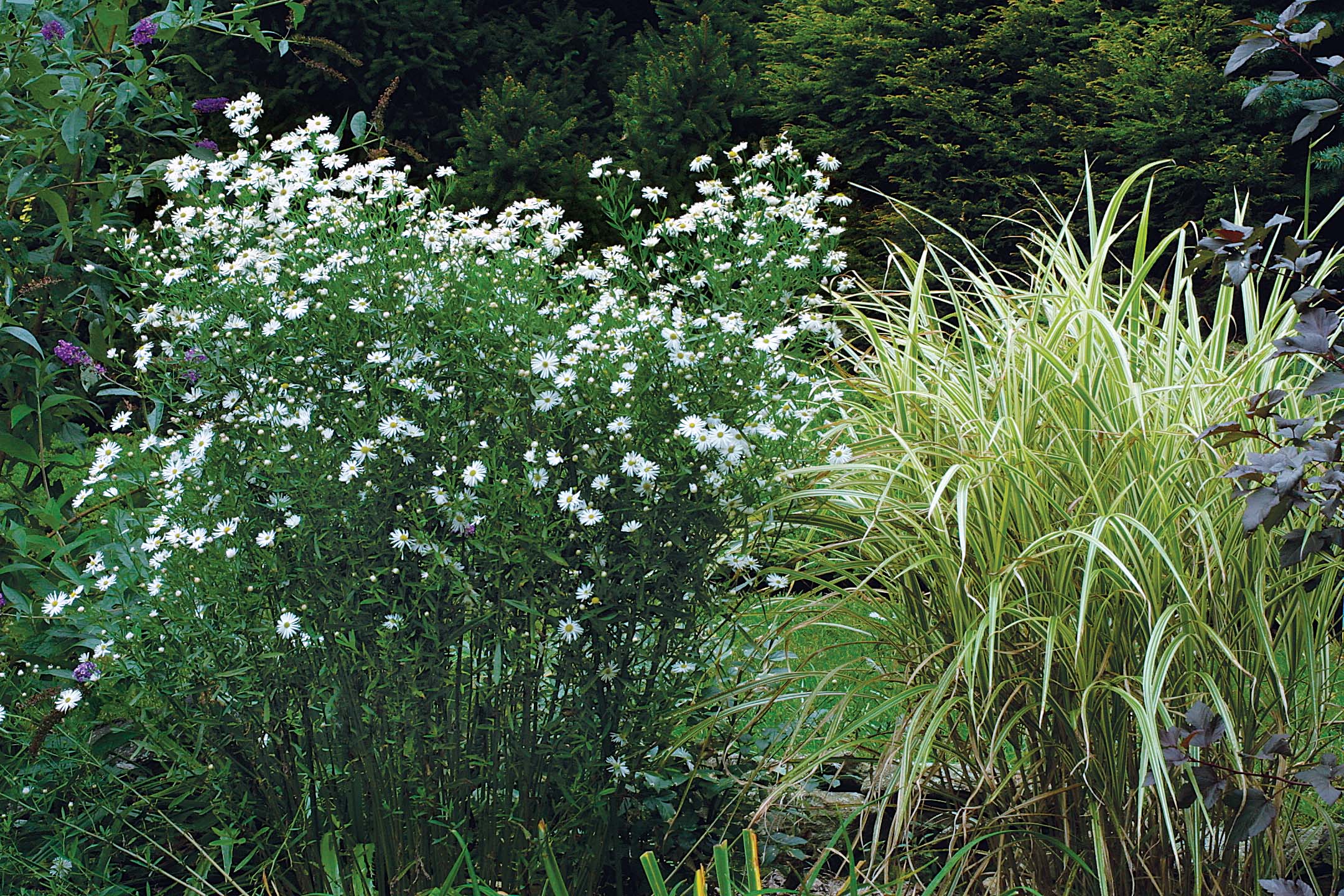 ‘Snowbank’ boltonia (Boltonia asteroides ‘Snowbank’, Zones 4–9) is a cultivar of a plant native to the eastern and central United States. ‘Snowbank’ is ideal for the middle of the border and seldom needs staking. The strong, straight, 4-foot-tall stems begin branching partway up and are clad in willowlike blue-green leaves. In fact, the foliage is about as good as it gets and makes a fine background for shorter plants. To top it off, the upper two-thirds of the plant becomes a cloud of white daisy flowers in mid-September.

‘Autumn Joy’ sedum changes its look with the seasons

Beautiful and bulletproof, the chameleon-like nature of Sedum ‘Autumn Joy’ (Zones 3–10) has always appealed to me. Poised for early-spring growth, its small, tight, blue-green rosebuds have already emerged at the base of each stem, sometimes even as the snow flies. By April, the blue-green rosettes have elongated into succulent, leafy stems (photo, right), which, at the end of May, are tall enough to mask the dying foliage of spring bulbs. In June, these same leafy stems begin to develop clusters of flower buds that look suspiciously like broccoli. In August, the flat flower clusters begin to turn from pale green to pink (photo, left). At their most colorful—from the end of the month through the middle of September—the flowers of ‘Autumn Joy’ deepen from pink to rose to russet to brown. Allowed to remain upright, the 2-foot-tall dried stalks and brown heads stand out against the snow. 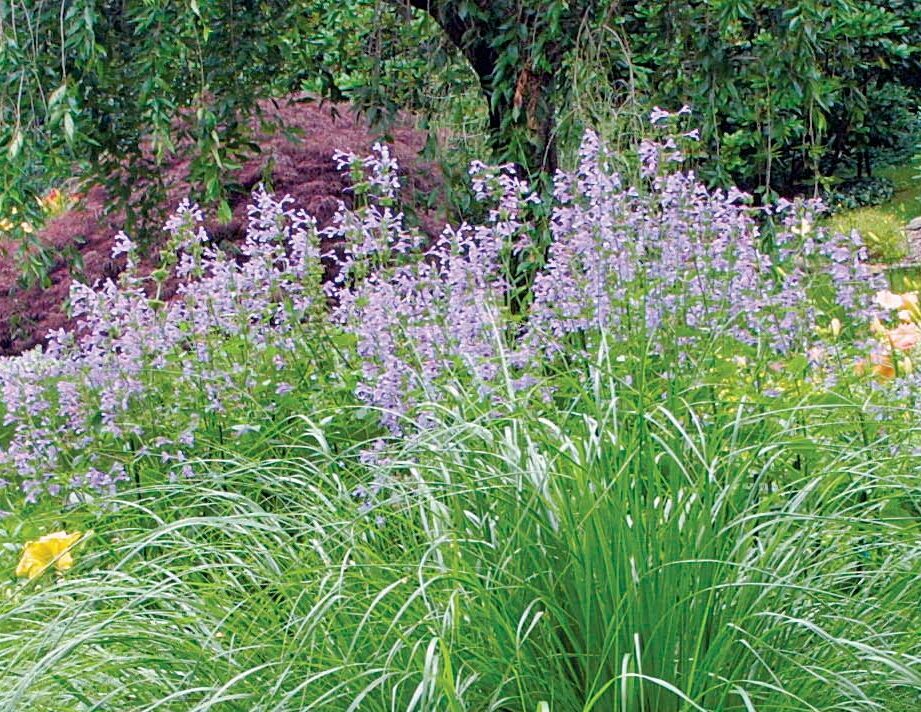 My other favorite grass is Miscanthus sinensis ‘Morning Light’ (Zones 4–9). It’s a huge temptation to add zebra grass (M. sinensis ‘Zebrinus’) and maiden grass (M. sinensis ‘Gracillimus’) to this list; they miss out only because they both require staking. In contrast, ‘Morning Light’ is self-supporting and arguably the most beautiful. The inner light, which accounts for its name, emanates from the white midribs of its fine-textured leaf blades and the threads of white around their edges. A shimmering miracle of grace between 5 and 6 feet tall, ‘Morning Light’, like fountain grass, turns golden in November and fades to beige in winter.

Fountain grass (Pennisetum alopecuroides, Zones 6–9) stands out for its excellent habit and stunning year-long beauty. Given a generous 3-4-foot circle around each clump, fountain grass develops into a 3-foot-tall, perfectly symmetrical mound of narrow, arching blades, which makes a superb background for my daylilies. Fuzzy mauve flower heads appear in late summer, adding much to the charm of this grass and about a foot to its height. In fall, its leaves turn golden and then gradually fade to tan in winter. Last spring, I divided the two clumps of fountain grass that hold down the ends of matching borders at the far end of my garden. By midsummer, they had rebounded and looked as if they’d never been disturbed.

This site is protected by reCAPTCHA and the Google Privacy Policy and Terms of Service apply.
See all newsletters
Previous: Reliable Performers for the Southwest Next: 3 Autumn Favorites to Anchor Your Garden Design
X
View Comments