Few perennials are as hardworking as catmints (Nepeta spp. and cvs., Zones 4–8), which are sometimes also called catnips. While some gardeners might consider them overused by professional landscape designers, there is a good reason for that; they perform well and look good for nearly the entire growing season. What may surprise you, though, is that there are many different species and selections within the genus that are worth trying out in your garden. Here are a few of the most common catmints, as well as a couple of the lesser-known species.

As mint relatives, catmints all share some distinguishable features, mainly square stems and some sort of scent to the foliage. These scents can range from a fresh, minty smell to some that are musty, skunky, or, honestly, only something that a cat can love. Yet with so many species available, there is a catmint for nearly everyone. Catmints are overperformers. They bloom in spring, through midsummer, and often, if cut back, until autumn.

The most popular species and hybrids

Perhaps the most common varieties found at garden centers and nurseries are the perennial catmints often used in mass plantings. Some of the best popular species are Nepeta grandiflora (Zones 4–8), N. racemosa (Zones 4–8), and crosses between N. racemosa (Zones 4–8) and lesser catmint (N. nepetella, Zones 4–8), which are known as N. × faassenii (Zones 4–8) hybrids. Their grayish foliage and generally bluish or purple flower spikes are invaluable in borders. They are excellent pollinator plants and hardworking fillers in mass plantings, and they are tolerant of poor soil conditions. Depending on the variety, N. × faassenii and N. racemosa selections are also disease resistant, are bothered by few pests, and are even avoided by deer.

Lesser-known catmints that you should grow

With over 250 species, the genus Nepeta offers curious gardeners many more choices. While many may look similar, there are a few standouts worth mentioning.

Siberian catmint’s flowers are large and striking, but even better, its blooms are favorites of pollinators, especially hummingbirds. Try RHS Award of Garden Merit winner ‘Souvenir d’André Chaudron’ syn. ‘Blue Beauty’. This cultivar is on my must-have list. Good garden centers often carry it, but try to buy it early in the summer so it can get established. Siberian catmint does spread and may need some annual corralling to keep clumps tight.

While a yellow catmint may seem off-brand for such a purple genus, this gem is worth seeking out for many reasons beyond what you initially may imagine. This is a catnip that zigs when everything else zags. Blooming with luscious, pale, custard-yellow flowers that work well against every other color, this beauty explodes into bloom in late summer, just when you think your garden is shutting down for the season.

While yellow catmint is perhaps the most underused catmint, it’s difficult to source. Luckily, it appears on some specialty nursery lists and is easy enough to grow from seed when sown under grow lights in February.

Nurseries carry a number of named selections, including ‘Blue Dreams’ or Prelude™ Purple (‘Balprelurp’). Short-stalked catmint is good for more display value than just its flowers; the foliage is colorful in the fall. It’s also deer resistant.

How to grow catmint

Care is easy and generally only requires a hard cutback after blooming or a Chelsea Chop in early June to delay flowering and to create a shorter plant. Catmints thrive in full sun to partial shade (provide at least half a day of sun) and do best in soil that is drier in winter, so good drainage is vital. These are clumping perennials and generally have no running or invasive behavior, which is welcome today. 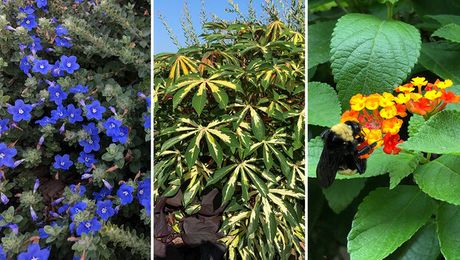 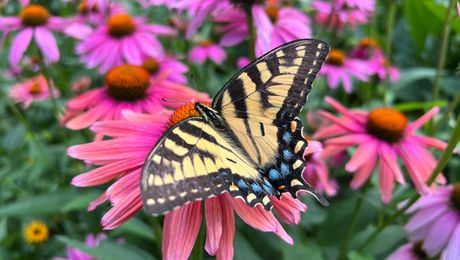