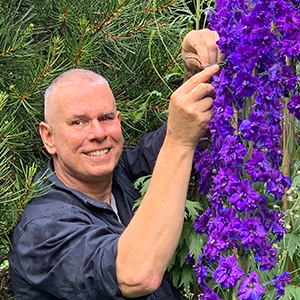 Matt Mattus’s career in horticulture began when he was 10 years old and started to exhibit marigolds in plant society shows. He currently sits on the board of the Tower Hill Botanic Garden, serves as vice president of the Worcester County Horticultural Society, and is the past president of the North American Rock Garden Society. He’s the author of Mastering the Art of Flower Gardening and Mastering the Art of Vegetable Gardening from Cool Springs Press. Matt lives and gardens in his historic family home in Worcester, Massachusetts (which has been featured in Garden Conservancy Open Days events), with his partner, Joe, their three lovable Irish terriers, many chickens, Indian runner ducks, and Tom the turkey. You can follow him on Instagram @Matt_mattus and read his award-winning blog Growing With Plants.

What do you like most about gardening in your region?

Definitely the four seasons. But here is a surprise—I like winter gardening the best now that I have a greenhouse. I know it’s a luxury item, but I had no idea how a greenhouse in the Northeast can introduce one to an entirely new gardening season. Every week from December until March is special, with some specific plant blooming, emerging, or scenting the greenhouse. I now can’t imagine November without the almond scent of fragrant tea olive (Osmanthus fragrans, Zones 8–11), or January without pots of South African bulbs blooming in the winter sun, or February without all those camellias (Camellia spp. and cvs., Zones 6–10) that were once so common in every Northeastern glasshouse a century ago. The best part is that every old gardening book from the 19th century talks about the same microseasons I now see under the glass, so it’s like stepping back in time with all of the treasures coming back to life. Plus, it focuses me, as I only have a few hundred feet to garden in instead of two acres with no weeding—just the fussy work, which is what I like best.

What’s the biggest challenge to gardening in your region?

The unpredictable weather trends, which seem to be more common now than ever before. Last year an early snowstorm and hard freeze in November caught me off guard, and many plants never made it back into the greenhouse. And a few 70-degree days in late winter can kill a marginally hardy tree or shrub. New England has always had notoriously fickle weather, but lately it seems even more unpredictable, especially in the transitional seasons of spring and autumn.

What was the last plant you killed?

I killed a small pot of acacia seedlings (Acacia spp. and cvs., Zones 9–11) that I started this spring simply by missing a morning of watering them (even though they were supposed to be able to handle drought!) My guess is that they are more sensitive to drying when they are still tiny seedlings. Of course, it always seems to be the rare plants that die. I also killed a rare geranium that I had shipped to me—a variegated ‘Caroline’s Citrine’ geranium (Pelargonium cordifolium ‘Caroline’s Citrine’, Zones 10–11). It’s hard to come by and apparently sensitive to temperature shifts such as cold nights and warm days. It was so beautiful, and I repotted it so carefully and kept it in the greenhouse until it was warm outside, but it just melted away into nothing. I’ll try again with another one next spring.