These moisture-loving plants thrive where most would flounder

Lots of gardeners have at least one area of their property that never seems to dry out. It is, invariably, in a location that screams for a garden, but most plants can’t handle consistently wet soil. Without a steady supply of air, waterlogged roots begin to gasp and eventually rot, killing the foliage above. Fortunately, there are many plants that like being immersed. Working with ponds at Chanticleer, a public garden in Wayne, Pennsylvania, and growing up near wetlands have given me an appreciation of the wetter side of horticulture. Here are several plants that can handle any consistently wet condition—from soil that doesn’t ever dry out to soil in standing water—without missing a beat.

Skunk cabbages are big and bold in every way

When I was young, I used to rip off skunk-cabbage leaves and try to inflict some malodorous justice on opponents in childhood war games. Today, I quite fancy the plants that inspire these pungent memories. Their big, bright green leaves, backlit with early-spring light, welcome the growing season. Mottled maroon and green flowers emerge before the leaves with the ability to warm up the air and melt snow around them. The flowers have a carrionlike scent, which attracts the flies that pollinate them. Lysichiton americanus (Zones 7–9, photo right), the hardest to establish, is also the most desirable in my book, with large leaves and a big golden yellow “flower” (the showy part is actually a spathe—the flowers are tiny and borne on the spikelike spadix inside). L. camtschatcensis (Zones 5–9, photo above) has a white flower, and the plant is a little smaller. An interesting curiosity about these plants is their contractile roots, which extend and then contract, pulling the plant crown deep into the soil.

Spring snowflake is similar to the more common snowdrop (Galanthus spp. and cvs., Zones 3–9), except that the snowflake’s flower has six petals of equal length, while a snowdrop’s flower has three long and three short petals. Spring snowflake is also taller than a snowdrop and begins blooming just a bit later. Spring snowflake’s leaves are a handsome cheery green, and its flowers are uniformly large and white with yellow-green tips. Although many rare cultivars exist, they are not easily obtainable. To achieve a meadow look, I’ve planted my spring snowflake in a patch of turf along with snake’s-head fritillary (Fritillaria meleagris, Zones 4–9); the effect is outstanding.

Size: Up to 1 foot tall and 4 inches wide 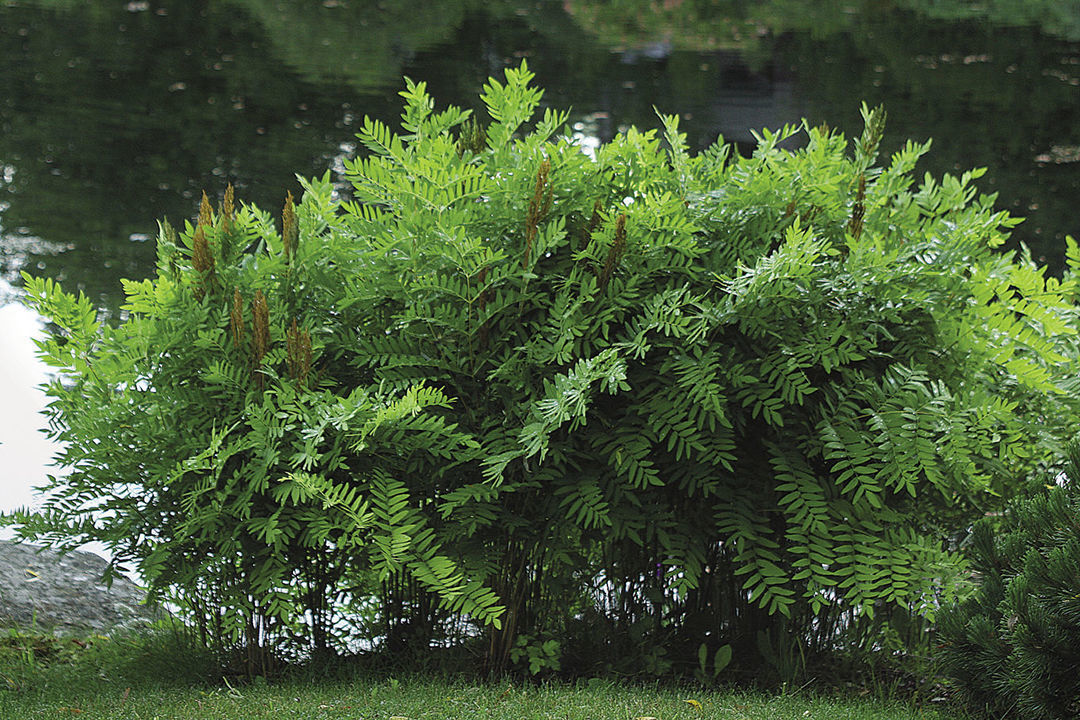 The fronds of royal ferns are magical in spring: slowly unfurling coils covered with fine wool, which hummingbirds use to line their nests. Osmunda regalis is the name given to the European variant of these ferns. It is a magnificent plant that grows to an amazing 4 to 5 feet tall at maturity with a ruddy constitution. O. spectabilis is the American royal fern, just recently distinguished from the European version with the advent of genetic testing. The American royal fern tends to spread in a dense, fibrous, undulating hummock. I rather like this effect, so in fall, I make sure that all the fronds are cut back to this dense mass to appreciate it fully.

When I first bought golden saxifage and knocked it out of the pot to see its roots, it looked like it had the potential to be a running weed. I divided it and planted it in several locations, where I could monitor and remove it if necessary. All of the divisions died except for one that was located in cool moist soil with high shade. In subsequent years, it has crept around but not aggressively so. Its tight umbels of golden chartreuse flowers are borne in early spring and fade to apple green.

Related to primroses (Primula spp. and cvs., Zones 3–8), these fun spring ephemerals are primarily known for their white to deep rose–pink flowers that are shaped like badminton shuttlecocks with contrastingly colored noses. The rounded leaves of shooting stars emerge in spring and are followed by a flush of flowers. These flowers are enthusiastically pollinated by bees using the shake method: A bee latches onto the flower and, with a buzz of its wings, dislodges the pollen from within the flower tube. The stalks are about 10 to 16 inches tall, and the flowers arch like fireworks at the top. When the seed capsules ripen, the stalks fold over, thereby dispersing the seed further afield.

Native to the West Coast, darmera grows in moist to wet soils, where its thick rhizomes crawl aboveground like a pile of tangled rope. The petioles can rise upward of 3 feet, if conditions are right. The broad leaves are supported from the center by coarse, hairy stems. Darmera’s flowers are unusual in that the leafless pink umbels shoot up well before the leaves arise. The more sun and heat given to this plant, the smaller the leaves will be. It does best with shade and moving water—along a shady creek, perhaps, where the leaves are cool and will not brown out along the margins.

Candelabra primroses are diverse and colorful 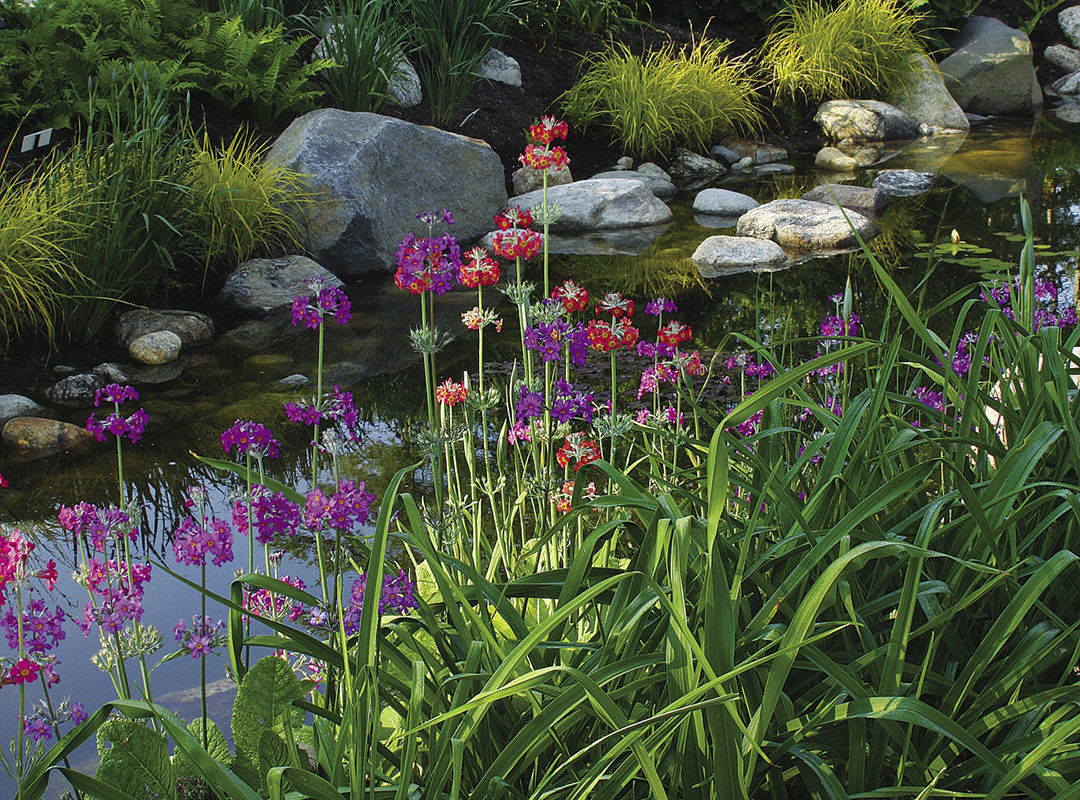 While primroses are a diverse group of plants, the subset of candelabra primroses are the most flamboyant of the lot. Strappy romaine lettuce–like leaves send up stalks of tiered whorls of flowers. As many as five to seven whorls can be stacked one upon the other. I grow my candelabras in cool, moist, fertile ground in the light shade provided by a mature deciduous canopy. Planted at the bottom of a slope, my primroses receive lots of cool dew, which aids in flower longevity as well as plant health. Established plants with several rosettes can be lifted and teased apart to multiply your stock. Be sure to leave plenty of bright white roots with each division.

Honeycup is bright and sweetly fragrant

Honeycup is so named for the sweet fragrance and shape of its pendulous, bell-shaped flowers, which appear in early summer. The waxy, powdery blue bloom on honeycup’s leaves is amazing in early morning when scattered with dewdrops, reminding me of the glass beads poured into the painted stripes on roadways; they magnify the light and set the shrub aglow. This shrub’s fall color can be lemons and limes in the shade or cranberries and oranges in full sun. It is, unfortunately, painfully slow to establish. Moist, acid soil is a must—add peat to your soil for moisture retention and drainage if needed. Once established, honeycup is tolerant of a wide range of conditions.

Yellowroot is an attractive low-growing shrub native to streambanks in the eastern United States. That said, this shrub can take a wide range of conditions. Drooping racemes of small maroon flowers decorate this woody plant early in spring as the leaves unfurl, while in fall, the foliage turns shades of yellow and reddish purple. Yellowroot spreads slowly to form a thicket-like ground cover. It has quite the herbalist following, and is often recommended as a treatment for topical bacterial infections and hemorrhoids.

Swamp azalea is dainty and fragrant

Yikes! With a name like swamp azalea, you might think that this plant has a foul odor, like that of skunk cabbage. But unlike skunk cabbage, this deciduous azalea has small leaves and sweetly fragrant, white to pink flowers in late summer that attract butterflies and hummingbirds. In fall, its foliage turns shades of orange and red. As long as the roots don’t dry out (it can take occasional standing water), it is fairly adaptable, preferring high shade. It will eventually spread by root suckers to form colonies.

Size: Up to 8 feet tall and wide

Few plants have flowers as subtly fantastic as those of buttonbush. The spherical, fuzzy, exceptionally fragrant, late-summer to early-fall white flowers (photo right) are a magnet for pollinators, as they are a rich nectar source. Buttonbush is generally considered a shrub in moderate climates, although in warmer areas, it can grow quite large. The cleverly named ‘Sputnik’ is a dwarf variety, which grows only 4 feet tall. Buttonbush is virtually care-free, susceptible to very few pests and diseases. If you prefer to keep its size in check, it can be pruned drastically in spring.

How does a plant survive in wet soil?

It’s a simple fact that plant cells need oxygen to live, and most plants take in oxygen via their roots from the air spaces between soil particles. If soil is waterlogged, all of the oxygen has been displaced, and most plant cells will, in essence, drown, causing root damage. Plants that thrive in consistently moist to wet soils, however, have evolved ways to get their oxygen in more creative ways:

1. Some trees, like swamp cypress (Taxodium distichum), develop aerial roots called pneumatophores (photo above) that stick up above the surface of the soil to reach and take in oxygen.

2. Some aquatic and wetland plants, like water lilies (Nymphaea spp. and cvs.), take in oxygen through their leaves and transport it down to their roots through open spaces in their stems, leaves, and roots (called aerenchyma).

3. Plants that have adapted to wetland areas tend to have shallow rather than deep root systems. When water recedes, the plants are, thus, more able to absorb oxygen.

Joseph Henderson is a horticulturist at Chanticleer in Wayne, Pennsylvania.

Photos, except where noted: Jerry Pavia/gapphotos.com

The following mail-order plant sellers offer the widest selection of the plants featured: