Your lot might be limited, but your options aren’t

Four-season interest in a drought-tolerant package

Many think that naturalistic plantings can’t possibly be implemented in a postage stamp yard—least of all a front one—and that they are better suited for rolling gardens and park settings.

This space contradicts that idea. With a judicious plant selection densely arranged around a few anchor points, this garden manages to look good year-round with little to no maintenance. Pedestrians will switch sidewalks just to get a better glimpse.

To start, the front lawn at this home (seen above) had been devastated by chafer beetles, so I had a mostly blank canvas to work with. All that remained was a mature lilac (Syringa cv., Zones 3–9), a straggly yet charming old rose bush (Rosa cv., Zones 5–9), and a concrete walkway. First, I planted four stout boxwoods (Buxus sempervirens, Zones 5–8) at the corners of the walkway. They serve as monolithic, evergreen anchor points.

Next, I installed a layered planting chosen for its year-round good looks. The structural grasses went in first—Mexican feather grass (Nassella tenuissima, Zones 6–10) and some switchgrasses (Panicum virgatum cvs., Zones 5–9) that maintain their form and last for most of the year. The bolder, longer-lasting perennials such as May Night salvia (Salvia ‘Mainacht’, Zones 5–9) were then added. Finally, open gaps were filled in irregularly with looser, shorter-lived perennials and annuals such as love-in-a-mist (Nigella damascena, annual). In fall, I added some hardy bulbs close to the areas left open by summer perennials. The bulbs have time to bloom and go dormant by the time the neighboring plants expand fully. 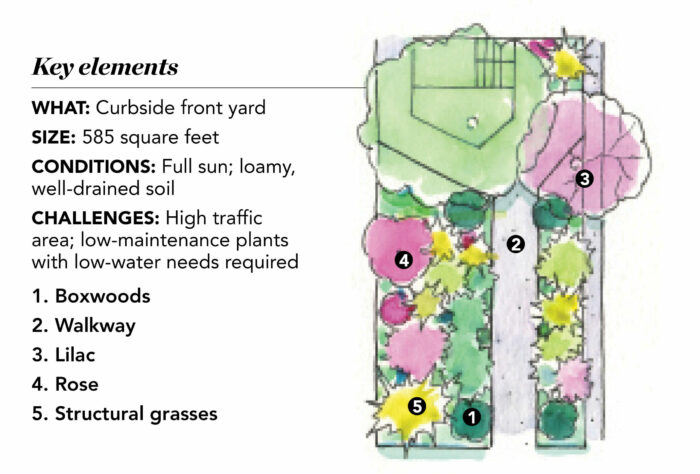 The neatly trimmed boxwoods offer the minimal sign of order and control required to set this garden apart from a piece of fallow land. Visually heavy, these shrubs provide a counterbalance to the light and fleeting qualities of the surrounding matrix planting. Because all of the plant choices are drought tolerant and low maintenance, this garden virtually takes care of itself.

Secluded on one side by a rose-covered trellis and by mature hedges elsewhere, this cozy front yard offers a degree of privacy usually attributed to backyards. Again, the paucity of space didn’t keep us from packing in an ambitious program. A curved walkway leads from driveway to main entrance and then down a few steps to a small patio floating over a manmade pond. A low, dry-stack wall (built in an arc to echo the outline of the walkway) helps retain a slight grade change. Low evergreen boxwood hedges also help define the layout of the space. If all art and furniture were to be removed from a house, the floors and walls would keep its interior legible; a similar story could be told of this garden with regard to its hedges and hardscape.

A few small trees create some pockets of shade at the base of which are several tufts of Appalachian sedge (Carex appa­lachica, Zones 4–8), along with various winter-blooming hellebores (Helleborus cvs., Zones 4–9). In small gardens, every potential planting nook must be filled. The remaining beds are filled with an array of high-performing perennials such as lavender (Lavandula spp. and cvs., Zones 5–10) and shrubs that look good in spring, summer, and fall.

This garden is all about wise geometry—a thoughtful, even if simple, layout of space. For instance, the patio isn’t huge, but it provides ample space to accom­modate a table for entertaining. It is perfectly balanced by garden beds large enough to let the plants shine. When you’re considering a space, it’s not so much about dimensions as it is about the balance within the space. In other words, know your site and know your plants. Then set your goals, stick to a clear strategy, and pack it in.

If I had to draw an analogy with the interior of a house, this backyard would be the family room. These homeowners had a remarkably detailed wish list, from a veggie patch to a sandbox to a play lawn. Straight lines and right angles were the best way to impose order and increase the clarity of what surely would be a busy space. Adding to the design difficulty was the site’s slightly sloped grade. This was corrected by building a low concrete wall, cast across the yard like a traversal spine. This pony wall also helped define a raised planting area at the top and, at the bottom, an elongated sandbox ending in a short flight of steps. 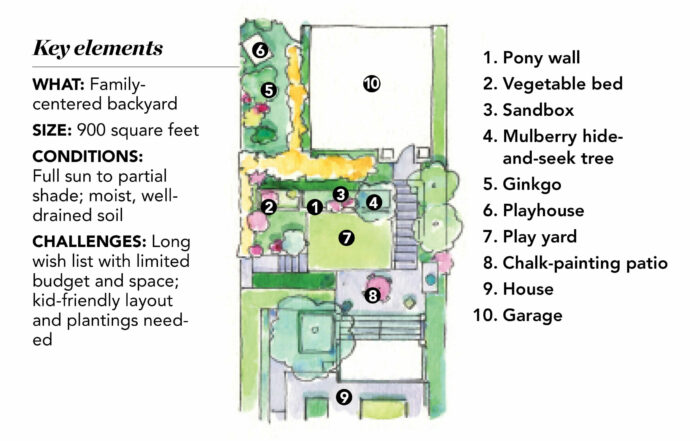 With the use of simple materials and basic geometry, the space as a whole became less busy. The materials (raw concrete, regular brick-size pavers, and gray-stained cedar fencing, in particular) left plenty of room for the visual noise that any family-friendly backyard will have: brightly colored toys, chalk drawings, random potted veggies, toppled chairs, and other yard improvisations. This is an example of subtle hardware, loud software.

No backyard design could be complete without the plants, though. One focal point, a ginkgo (Ginkgo biloba, Zones 5–9), casts some protective shade on a miniature playhouse at the back corner. Below the tree, I planted a handful of highly textured, shade-loving perennials (which intrigue the kids). Most of the plants are geared toward the two children of this household. Their favorite and most jealously protected is a weeping mulberry (Morus alba* ‘Pendula’, Zones 4–8), rooted right in the sandbox. This small tree is the perfect hideaway for them—and probably the only spot in the yard that can’t be surveyed fully from the kitchen window.

The perfect blend of ornamental and edible

The renovation of this space was triggered by the sinking of an old concrete patio. Awash in sunshine, the backyard was already home to a handful of remarkable apple espaliers. While most of the fruit trees were trained against the perimeter fence and on the garage, the best one soldiered alone in the middle of the yard—an element that was not going to budge. My design started with establishing a layout that worked around, and with, this tree. 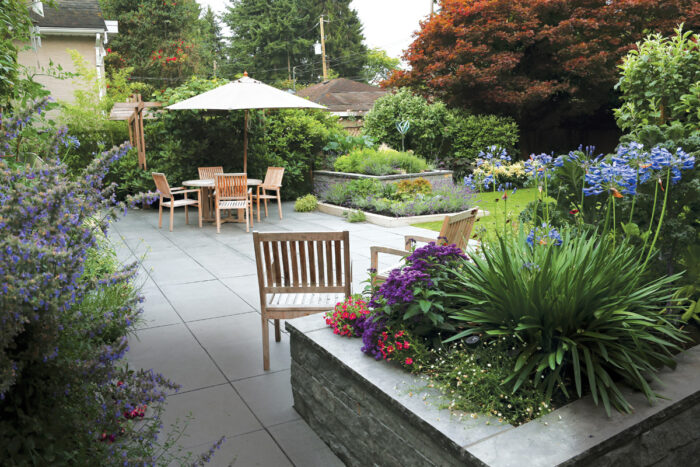 First, a new structurally sound patio was circumscribed by building four large raised planters, whose height, size, and orientation keep the eye moving within—and never past—the confines of the yard. A fifth planter was installed along the back of the house, along with some new, short stone steps. The old wooden steps were excessive, running the length of the house and overpowering the space without being useful. By shortening them, I was able to indicate clearly where traffic should go by taking all other options away. Protected from most direct rainfall by the roofline, this fifth planter turned into an ideal microclimate for killer disease-free tomatoes.

The taller patio planters were topped with a broad stone cap matching the material used for the steps and bed edging—the cap being perfect for informal seating. The lower planters are made of raw concrete, sans any cosmetic addition other than cascading perennials and annuals. This mix of edibles and ornamentals can’t be beat for year-round fun. As with the espaliers, a vigorous grapevine (Vitis cv., Zones 4–9) and a gargantuan peach-colored trailing rose (Rosa cv., Zones 5–9) add lots of vertical bang without eating up too much shoulder space. With help from the vines, the ubiquitous suburban paneled fence mostly disappears.

The success of this space is the result of the thoughtful selection and placement of the hardscape, which is functional and helpful in structuring the space, while leaving plenty of room for softscaping to play. 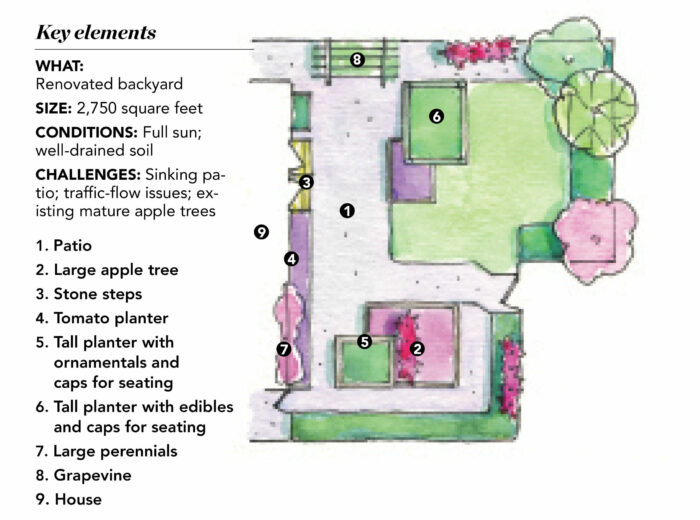 Dave Demers is the owner and principal designer of CYAN Horticulture, a design-build landscape firm in Vancouver, British Columbia.

This site is protected by reCAPTCHA and the Google Privacy Policy and Terms of Service apply.
See all newsletters
Previous: A Tiny Courtyard Garden Makeover Next: Inspired Design: What Are the Basic Elements of a Garden?
X
View Comments