What sensitive gardener would begrudge a vegetable the chance to bloom? The lettuce grower might if the plant tries too early. The premature ascent of a flower stalk will put a bitter end to a sweet crop of lettuce, which is not the result sought by gardeners, sensitive or not. So scientists have been looking at the flowering phenomenon known as bolting to learn how we might better our odds of keeping a palatable crop.

Bolting can be seen in a variety of crops, including beets, cabbage, celery, radicchio, and lettuce, but especially in lettuce. And lettuce is the crop in which bolting has been studied most extensively. Lettuce’s penchant to bolt and turn bitter is well known. What’s less well known is why it happens.

Many say that early bolting in lettuce is accelerated by high temperatures, but experiments have shown that temperature alone is not the deciding factor. What then controls when a lettuce plant will bolt? And what causes the bitter taste connected with seed stalk formation?

The discovery that lettuce’s transition from vegetative growth to bolting is influenced by cumulative periods of light was first made in Germany in 1931. Some plants in the field were simply covered so they had different daily exposures to light, and only plants given long daily periods of light bolted normally. 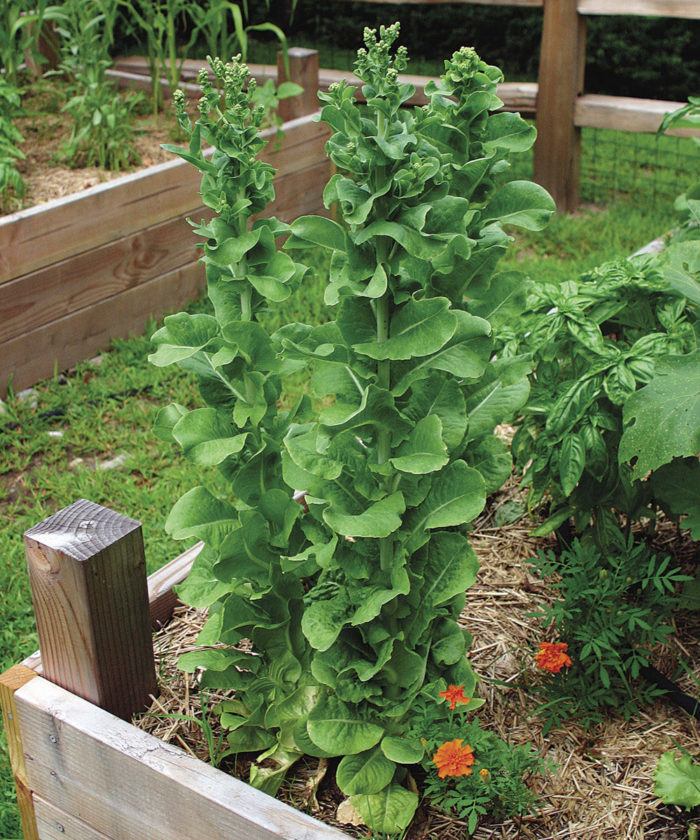 In 1995, William Waycott, at the United States Department of Agriculture in Salinas, California, described a number of experiments that dealt with the interaction of temperature and day length on bolting. Plants grown in plant growth chambers under short days of eight hours of sunlight at a steady high daytime temperature of 90°F grew to harvest maturity without bolting.

Plants grown on short days bolted about 135 days after planting, compared with about 90 days for plants on long days, and neither short-day nor long-day plants had premature bolting. Thus, total day length and not temperature determined the time of bolting. This can be explained by the existence of a genetically controlled clocklike mechanism that tallies the number of light hours required for a given cultivar to bolt.

Nevertheless, there are indications that, in addition to total day length, high temperatures can also stimulate bolting in lettuce during later stages of leaf growth. But nobody knows for sure whether heat alone or a  shortage of moisture, which usually accompanies hot weather, causes this reaction.

What causes bitterness in lettuce?

Scientists are sure that lettuce turns bitter after bolting. Biochemists have identified compounds responsible for the bitter taste of lettuce. These substances are in a class known as sesquiterpene lactones. These molecules have 15 carbon atoms or more arranged in rings.

The plant builds the rings in a number of steps starting with acetic acid (vinegar), which has two carbon atoms. Leaf bitterness has been highly correlated with the levels of one compound in particular, lactucin glycoside, in which the sesquiterpene is combined with a sugar molecule.

Before lettuce bolts, the bitter compounds are present at very low levels. But they increase in the leaves during flowering. Some wild lettuce species have higher concentrations of sesquiterpene lactones than domesticated lettuce. The wild lettuce has been used in breeding because it can introduce virus resistance, but breeders have had to be watchful not to introduce the bitter compounds along with the resistance.

The bitter compounds are also found in the milky juice, or latex, located mainly in the stems of lettuce. Laboratory experiments revealed that these compounds provide insect resistance. They have been shown to retard feeding by locusts, and may also act to repel burrowing insects.

Ancient civilizations cultivated lettuce, which probably originated in the Middle East. A romaine-type lettuce with long pointed leaves was inscribed on the walls of some Egyptian tombs. Over time, breeders have developed many varieties of tasty, sweet, crispy, and succulent lettuce. Despite its heritage, modern lettuce thrives best in cool climates and moist soil.

Yet even in warmer regions, there are ways to limit bolting in lettuce, and genetics plays a role. For years I have tracked bolting in many varieties of looseleaf, butterhead or Bibb, romaine, and other lettuce classes. All were sowed at the same time. I found cultivars in the same class that bolt later, by two weeks or more, than others. For example, the looseleaf ‘Slobolt’ is outstanding in this characteristic, as is the French Batavian ‘Sierra’. Both cultivars produce tasty lettuce in my garden.

The slower bolting trait I’ve seen was probably selected during breeding. Geneticists find that the number of days from sowing to seed stalk formation and flowering is a heritable trait involving a number of genes. Seed catalogs frequently describe some lettuce varieties as being “slow bolting,” but in my experience the claims cannot always be sustained. A wide range of genetic expression for bolting is possible. For instance, there is a dwarf mutant of lettuce that shows extreme resistance to premature bolting and may become useful for breeding purposes. At the other end of the scale, there are mutants of crisphead-type lettuce that flower unusually early. In an experiment, a normal lettuce flowered after 150 days in a greenhouse, whereas a mutant flowered in 55 days. In its haste to produce flowers, the mutant went from seedling to flower with¬out first forming rosette leaves or heading.

Premature bolting can be minimized by growing slow-bolting varieties, possibly by reducing the number of light hours at the seedling stage before plant¬ing outdoors, and by minimizing moisture stress. Conducting trials in your own garden to assess bolting resistance seems like a first requirement for obtaining tasty lettuce over a longer time.

This site is protected by reCAPTCHA and the Google Privacy Policy and Terms of Service apply.
See all newsletters
Previous: Plant a Fall Lettuce Garden Next: Grow Lettuce All Summer Long
X
View Comments