Had Trouble with Your Beans?

Although no one knows for sure who the first person was to start eating the immature succulent pods of legumes, it was likely some worker sweating away in a field somewhere who needed a snack food of convenience. This casual consumption of pods led to the development of some species of beans from otherwise dull storage grains into the magnificent fresh vegetables we now call “snap beans.” Snap bean is a modern name for what we used to refer to on my father’s vegetable farm in Woodstock, Illinois, as the “string bean,” “green bean,” or (if he didn’t choke on the words first) “French bean.” I can still remember spending hours in the early 1960s pulling off the suture string from string beans, which ties together the two halves of the pod, prior to putting them up for sale in our family’s roadside vegetable stand (my family was a little late in discovering that stringless varie­ties of green beans had been developed in 1894).

Not all issues associated with beans are, unfortunately, as easily thwarted as removing the string. Today, thanks to pests, diseases, and conditional issues, seasoned gardeners and newbies alike struggle to get a decent harvest. The following are some common bean-growing problems as well as helpful tips on how to get a better bean harvest—one that is worthy of that iconic Thanksgiving salad made with bacon bits and fried onion rings.

Solution: Buy Disease-Resistant Cultivars or Ones Treated with Spinosad 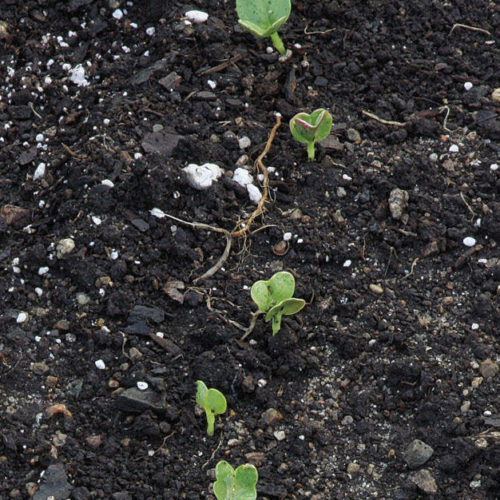 Bean emergence and seedling establishment is a universal problem for all growers. Depending on soil temperature and moisture content, up to four different types of soil fungi can attack germinating seeds and seedlings. That’s why commercial bean seeds are often coated with an array of fungicides and insecticides. Cool and wet conditions, common in spring in northern climates, tend to breed Aphanomyces and Pythium species of fungi, while hotter and drier soils tend to favor Fusarium and Rhizoctonia. That’s why it’s important to consider your soil conditions and climate in order to select bean cultivars that have resistance to one or more of these pathogens.

There is also the possibility that a pest is what is preventing your seeds from sprouting. The likely culprit is the seedcorn maggot, which lays its eggs in soils with high organic matter, then the devilish larvae burrow into the bean seed. I don’t know of any genetic resistance to this pest, which is why some seeds are often covered with a colorful death-bomb powder that keeps the seedcorn maggot away. To avoid troubles with this pest, I rely on a less toxic approach and plant seeds treated with an organic insecticide (Spinosad).

Problem: Blotches of Yellow and Brown Spread Across the Leaves, Causing the Plants to Defoliate 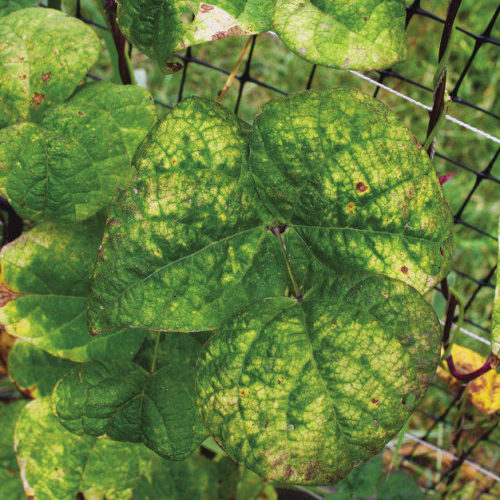 Common blight (Xanthomonas), as its name implies, is extremely common. All bean cultivars that I am aware of are susceptible. This bacterial disease is transmitted by seed and develops during hot summers when the plants, pods, and seeds within the pods are wet with rain. The control is simply to plant seeds that were grown in a hot, dry climate (where furrow irrigation is the water source in summer and, therefore, the foliage, pods, and developing seeds remain dry). The dry seeds and seed coats keep the bacteria from developing. The disease is, thus, cleverly avoided by using western-grown seed. Remember: If you live someplace where the summers are hot and humid, you shouldn’t save your bean seeds to replant the following year.

Problem: Young Plants were Sheared or Cut at the Soil Level

Solution: Collars are One Option; Accepting Some Minimal Losses is Another

This tragedy is usually due to cutworms. There is no genetic defense against the various species of cutworms (meaning you can’t buy resistant bean varie­ties) because these critters will hide in plant residue, not just in the soil. Tilling can expose the worms to their own set of hungry predators, but tilling can ruin the soil structure. The cost benefit of sinking collars just below the soil surface and around week-old seedlings is, personally, beyond my level of gardening patience. I take a more laid-back approach to cutworms: I may lose a few seedlings, but that leaves more space for the surviving bean plants to flourish.

Solution: Hand-pick pests, introduceparasitic wasps, or let the plant rebound on its own

The odyssey of planting and enjoying your beans, sadly, does not end with successful germination; thereafter come the leaf eaters, the most noto­rious of which is the Mexican bean beetle (pictured). This pest is shy and feeds from the underside of the foliage, leaving a skeletonized appearance after eating. Hiding as it does—likely from its own predators—exacerbates control. A parasitic wasp, Pediobius, has been used at the University of Wisconsin to parasitize the larvae (which look like yellow pincushions), but the wasp will not overwinter and has to be purchased and reintroduced each year. This is another moment to consider the Zen approach to gardening. You can hand-pick the pests off the plants, but this is usually a losing battle. Often the only salvation is the bean plants’ ability to compensate for lost leaves.

Problem: The blossoms dropped before turning into fruit

Solution: Wait for the temperatures to drop, or start watering more 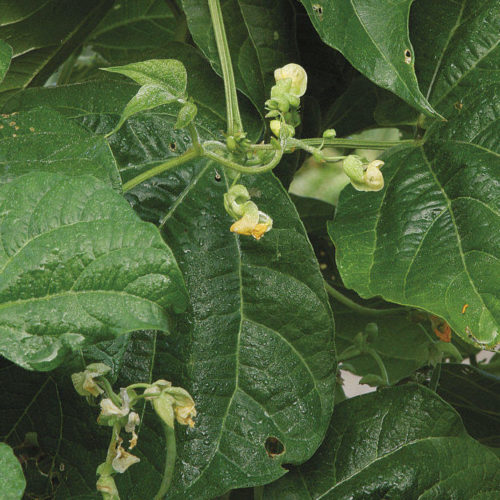 Dropped flowers signal stress, which is likely due to high temperatures or a lack of moisture. Beans are a lot like humans: When it’s hot and humid, we get distracted and do things like forget about the kids and let them drift off. There is only so much photo­synthate for a bean plant to spread around to its various parts, and when it’s stressed, the flowers and, consequently, the fruit are the first to be sloughed off. To give them a fighting chance, the plant will hang onto (and feed) only some of the flowers, rather than give too little sustenance to too many blooms. Once the stress is eliminated (when the temperatures cool down or you start watering regularly), the issue of blossom drop should resolve itself.

Solution: Use slug-and-snail baits or traps, or you can hand-pick the pests nightly 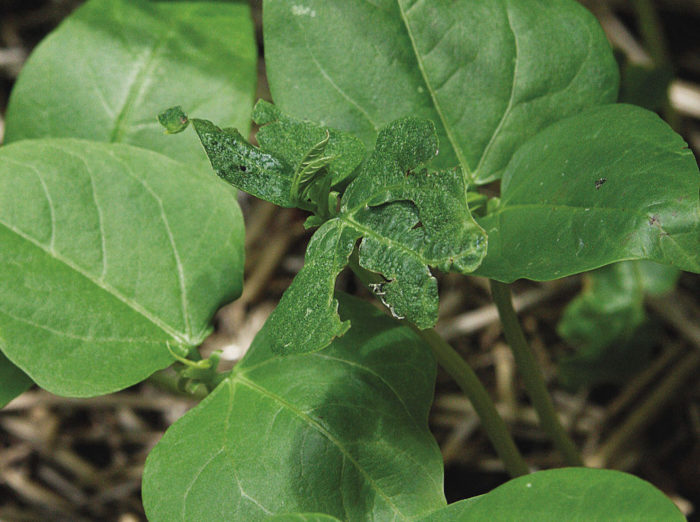 If you live in a northern location and don’t have cold enough winters to reduce the population, slugs and snails might show up in droves in spring. Will they eat bean plants? Absolutely. (The thistle is the only plant they won’t eat.) As we domesticated the bean plant to be more tender and more palatable to humans, we, unfortunately, made it more delectable to snails and slugs at the same time. Although baits and traps are an option, the most effective option for keeping these pests under control is picking them off by hand. After several nighttime outings, you will have put a significant dent in the population. The bean plants should bounce back from being munched on, and the harvest won’t be affected.

Beans at a Glance 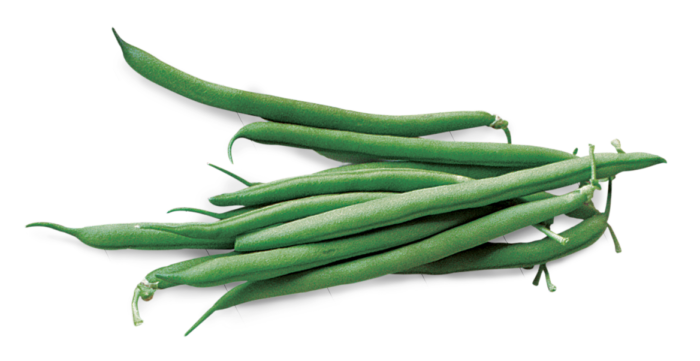 The “snap” in snap beans is due not only to the removal of the suture string that used to hold the bean pod together but also to a reduction in the fiber in the pod tissue. This culinary development has, ironically, come at a cost as the suture string and fiber is what caused the bean to forcibly eject and disperse its seeds as the pods dry. The cost to gardeners is that the reduction in fiber means that it is more difficult for seed companies to cleanly and easily extract seeds from the drying pods, resulting in higher seed prices. Here are other tidbits to consider before buying these pricey seeds this spring.

Not all their habits are the same

Just like tomatoes, beans can have an indeterminate (vining) or determinate (bush) growth habit.

Home gardeners often prefer indeterminate vining beans grown on a trellis so that they can harvest a few beans at a time, without having to bend over each evening to collect them for dinner.

Bush beans provide a more concentrated fruit set and allow for mechanical harvesting. This dramatically reduces production costs to farmers and processors and, theoretically, leads to reduced costs and greater abundance to consumers. For home gardeners with a lack of space, bush types might also be a good choice.

Not all snap beans are built the same when it comes to flavor. Here’s what you can expect from some of the most popular options.

The yellow of wax beans is a recessive mutation that results in degradation of chlorophyll in the pods, similar to the change some leaves make in fall. The color is heat stable and not soluble in water, so the beans will retain their sunny color upon cooking. The flavor is sweeter than many green varieties.

Many heirloom varieties of snap beans come in an array of purples and reds. The purple and red pigments are due to anthocyanins, which are, sadly, water soluble; upon cooking, the bright and shiny colors dissipate to a dull gray-green—the vegetable equivalent of Soviet-era architecture. The beans, however, have a similar flavor to their all-green siblings, but they can be a bit tough.

The pods of French beans tend to be thinner than traditional snap beans and are extremely tender. Some say their taste is “grassy” or “earthy,” similar to that of asparagus.

Jim Nienhuis is a professor of horticulture with a specialty in snap beans at the University of Wisconsin–Madison.