Beyond Basic Butternut: Other Squash Varieties to Try

Several years ago, a colleague here at Fine Gardening mentioned in passing that she was growing an array of winter squash. I remember thinking, “Why bother?” It’s not that I didn’t appreciate having roasted butternut squash at the Thanksgiving dinner table—but to grow a vegetable for the entire season while allowing it to swallow up a ton of garden real estate seemed foolish. After all, isn’t it just easier to pick up a couple of acorn or butternut squashes at the grocery store? But what my coworker Ruth Dobsevage told me, and what I found to be true years later when I finally decided to grow my own, was that there is a world of winter squash that few gardeners ever know. There are many varieties that taste so incredible, you’ll wonder why everyone doesn’t plant them. You generally won’t find these squashes at the typical supermarket, or even at a Whole Foods for that matter. The following winter squash changed my outlook on this group of vegetables and prompted me to always make sure I carve out enough space to grow them each year.

‘Speckled Hound’ tastes almost as interesting as it looks 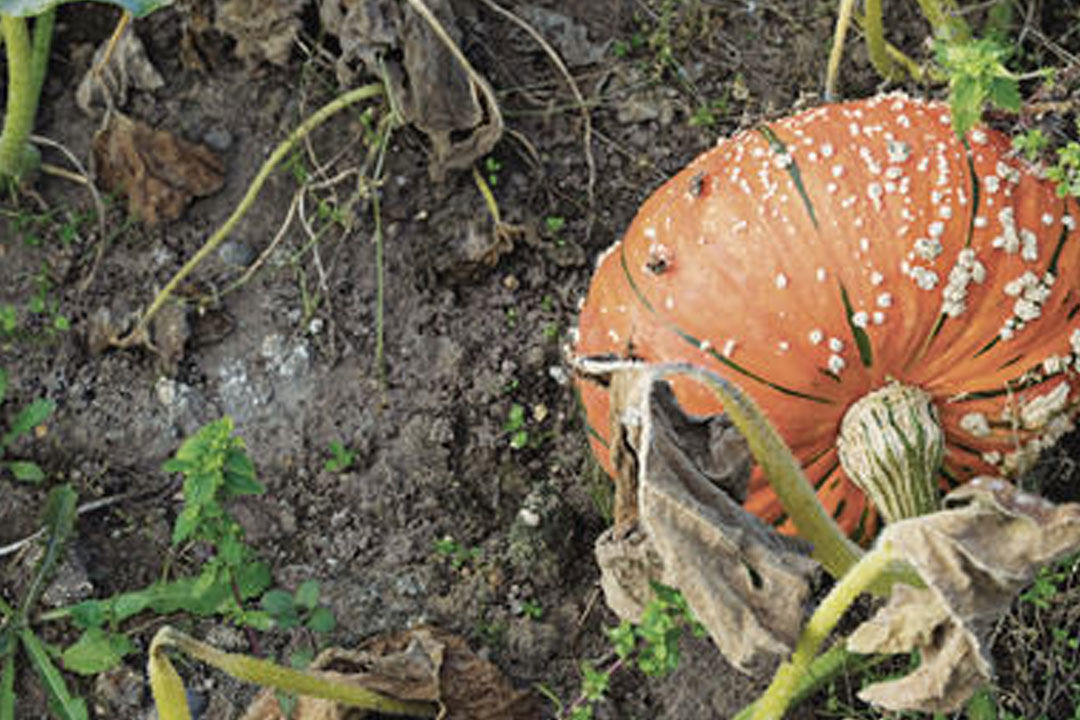 This mottled beauty is an attractive member of the pumpkin clan—although you can imagine that if a bluetick and a redbone coon hound had puppies, they would have similar coloring. The flattened, 3- to 6-pound fruits have a blue-green color that is splashed on the top and sides of the orange skin. The tasty, light orange flesh is dense with a sweet, nutty flavor unlike any other squash I’ve tasted. ‘Speckled Hound’ is considered a semibush plant, spreading up to 6 feet in every direction. Each plant will yield about eight fruits. If properly stored, these multicolored flying saucers will keep for four to five months in a cool, dry spot. A side note: The seeds of this squash are the plumpest of any winter squash I’ve planted. This makes them easy to handle when sowing and delicious when harvested and roasted from mature fruits.

‘Delicata’ has a yield that’s hard to beat 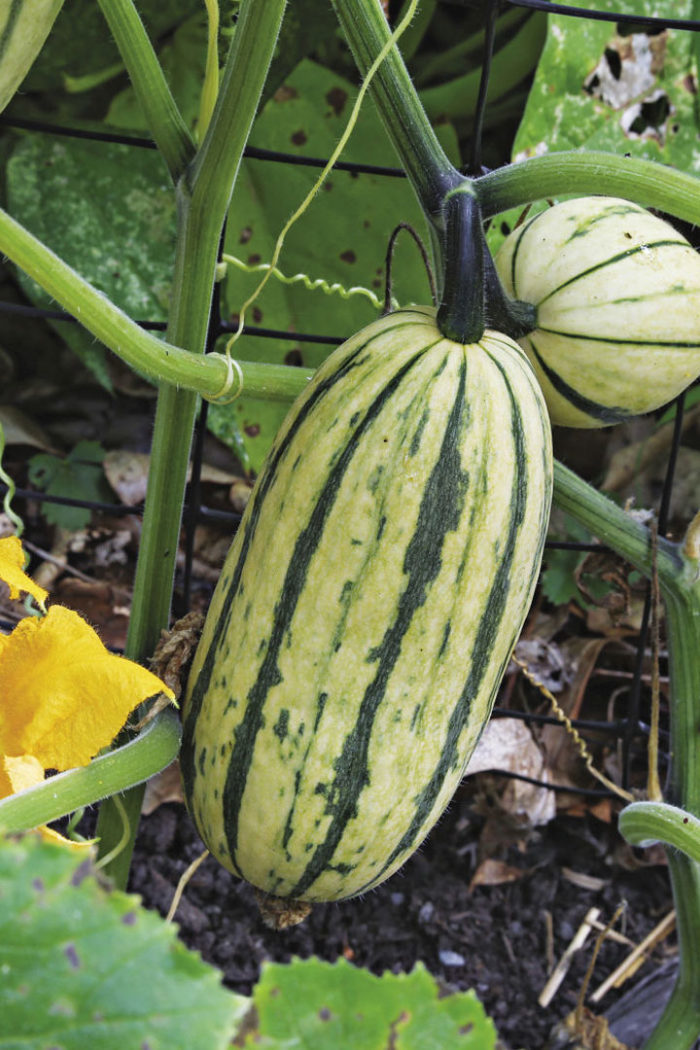 If a potato and a sweet-flavored squash had a baby, this would be their delicious offspring. ‘Delicata’ has sugary flesh with a bit of a starchy texture. The denseness of the flesh makes it a filling side dish at the dinner table. Each fruit is 8 to 9 inches long and can weigh up to 3 pounds (although 1 to 2 pounds is more common). The plants are crazy productive, ripening two dozen fruits or more on each vine if grown in a long-season location. ‘Delicata’ has shown some resistance to powdery mildew (a scourge to many squash plants) but is still susceptible to downy mildew, which has become a greater threat to crops in recent years.

‘UConn’ is perfect for short-season growers 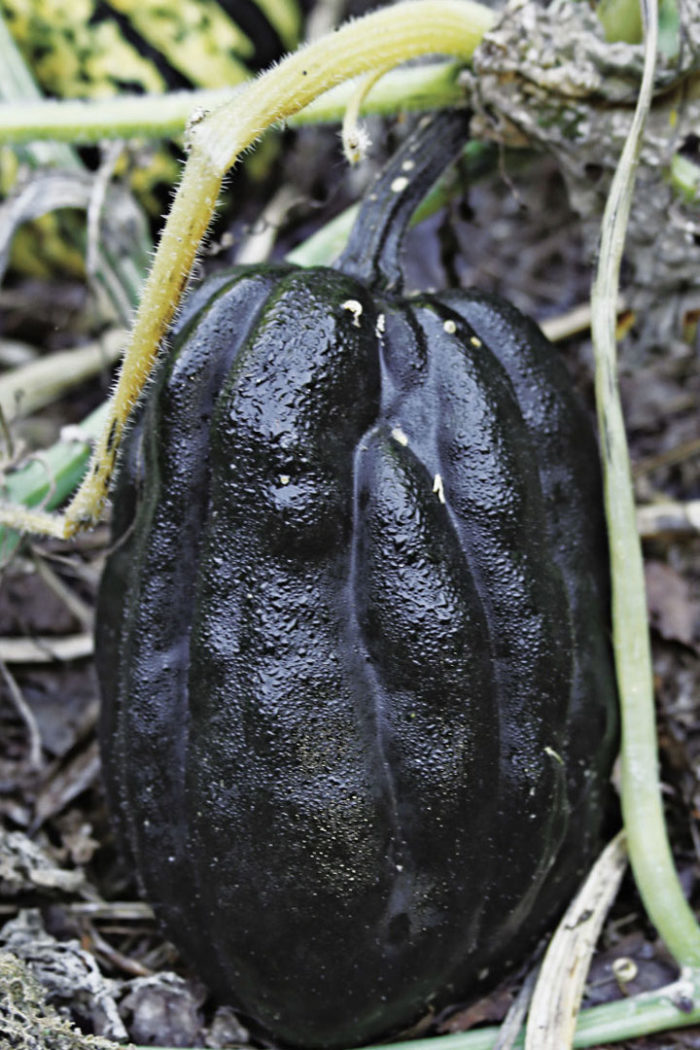 The first year I grew this acorn-type squash, I thought the fruit had a disease due to its misshapen, irregular form. After reading more about it, I came to realize this is normal. Although ‘UConn’ wouldn’t win any beauty contests, it is a hearty grower, producing a harvestable crop nearly two weeks earlier than other acorn squash. The dark green fruit is smaller than other varieties, but when you’re picking squash that early, who cares? The plants have a bush habit, too, so they aren’t space hogs like other winter squash. This variety was developed by the University of Connecticut, where they apparently breed more than just tournament-winning women’s basketball teams.

‘Iran’ is almost too pretty to eat 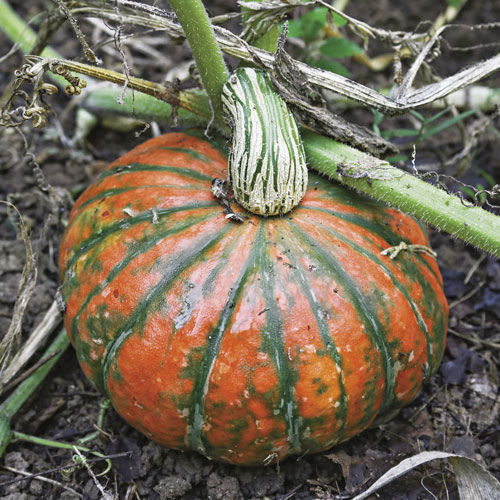 This is the prettiest squash I’ve ever seen, let alone grown. ‘Iran’ sports a squatty-pumpkin shape, with bright orange, ivory, and green mottled skin. The vines are aggressive, swallowing up anything within their 6- to 8-foot reach. Given enough space, the plants will produce a dozen or more 12- to 15-pound fruits in a season. If you grow them in a short-season locale, you can expect more along the lines of 8- to 10-pound fruits. Inside, the flesh is light orange and semisweet. I find these plants to be thirstier than other winter squash. The fruits keep a long time, storing well for three to four months. 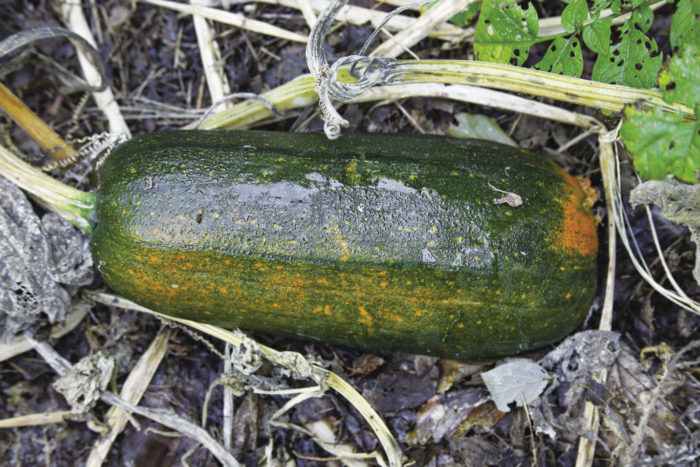 My winter squash guru, Ruth, retired from Fine Gardening several years ago but sent me an email last fall with a squash update. It said, in part, “Just writing to let you know that ‘Long Pie Pumpkin’ makes a fantastic pumpkin pie. The flesh is very dry and sweet, and if you are a pie maker, you should definitely give it a try next year. A big improvement over sugar pumpkins, in my opinion.” For someone who has been growing winter squash for as long as she has, this was a ringing endorsement. Although I, too, loved the creamy, sweet flavor of this squash, I found the yield to be disappointing. My vine only produced two good-sized (5 to 8 pounds apiece) fruits last year, only enough for one pie. I blame the wet, cool summer and early frost for the lack of production. I plan to make room for the vigorous vines again this year and hope I have better luck. Remember to harvest the elongated fruits when they’re green with an orange spot on the bottom (pictured). They will ripen in storage, turning completely orange outside as the flesh sweetens on the inside.

‘‘Sweet Dumpling’ has the best taste of the bunch 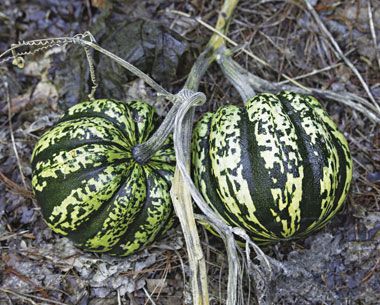 Wow. That’s really all that needs to be said about the flavor of these petite-sized fruits. Outside, each squash resembles a slightly flattened white acorn squash with splashes and speckles of dark green. Inside, the flesh is orange and so sugary sweet that there is no need to top it with maple syrup or butter. The plants fall somewhere between a bush and vining variety—sprawling up to 5 feet or so in every direction. Be warned that the fruits are small, averaging only 4 inches in diameter and weighing in at under a pound apiece. With a flavor that good, though, it doesn’t matter. After several years of growing this variety, I can attest to it having nearly 100% germination, too.

‘Red Kuri’ needs a bit more space than other varieties 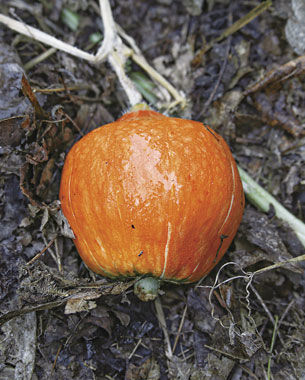 This puppy might be mistaken for one of the trendy Cinderella pumpkins that fetch a handsome price at garden centers—if it weren’t for the pointed tip of the fruit. The dark orange-red skin is thick and slightly bumpy, which can help protect it from sunscald in the South. The inner flesh is golden with a distinctive rich and creamy flavor. The plants develop long, sprawling runners, so you may want to give this variety more space than other vining varieties. The 3- to 4-pound fruits can be stored for a few weeks after harvest—making ‘Red Kuri’ a decent squash for short-term keeping.

‘Honeynut’ packs a lot of flavor into a small package 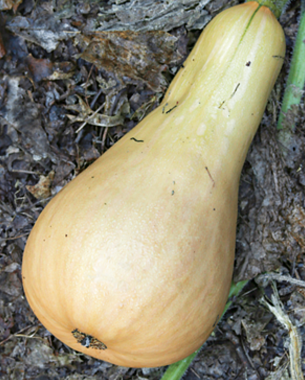 Smaller is just cuter. That was my reasoning behind trying this fairly new, miniature butternut squash. Thankfully, it turned out to be a delicious addition to my garden last year. The fruits each weighed in at about 1 pound—perfect for cutting in half and throwing onto the grill for roasting. The flesh was sweet and smoother than a classic butternut. The necks of my fruits tended to be skinnier and longer than the catalog pictures, but that didn’t affect the flavor. Each plant can produce upward of a dozen squash, so one plant is all a family of four really needs.

Growing Instructions at a Glance

Winter squash are much like many other vegetables. They like moist, compost-enriched soil and at least six hours of sun a day. The tricky part comes at the start of the season, however, which is when you’ll decide how and where to sow the seeds. For earlier harvests, start seeds indoors.

If starting indoors, sow two seeds per cell/small pot. After two weeks, thin out the weaker of the two seedlings with scissors. Harden off the plants for a week. Transplant into the garden after the danger of frost has passed. Space plants about 18 inches apart for bush varieties and 2 to 3 feet apart for vining types. Expect 7 to 14 fewer days to maturity with this method.

If direct-sowing seed, wait until late spring when the frost danger has passed and the soil has warmed to at least 60°F to avoid rotting. Sow two seeds 1-inch deep every 18 inches for bush varieties or 2 to 3 feet for vining types. Thin to one plant per spot in two weeks.

The following are some of the most common issues that plague winter squashes and some solutions to help you be a successful grower this year. 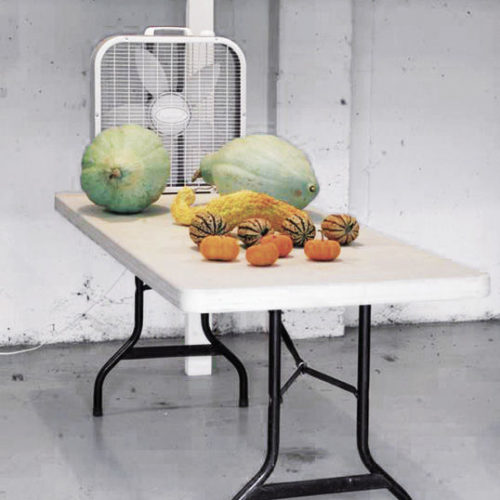 Unless they are properly cured, winter squashes won’t store long in the pantry. Be sure to harvest the fruit before the first frost, and wash the outside skin with a solution of bleach and water (1 tablespoon of bleach to 1 gallon of water). Allow the fruits to dry in a cool, well-ventilated spot for a week. This will prevent them from rotting immediately after the harvest. 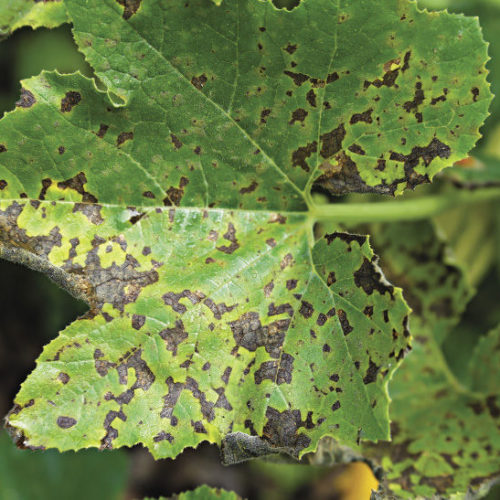 This disease strikes during humid weather, causing angular, chlorotic lesions on the foliage. It results in reduced yields and a greater proportion of misshapen fruit. To control it, plant resistant cultivars such as ‘UConn’, ‘Sweet Dumpling’, ‘Honeynut’, or ‘Delicata. Alternatively, you can try using a fungicide after early detection. 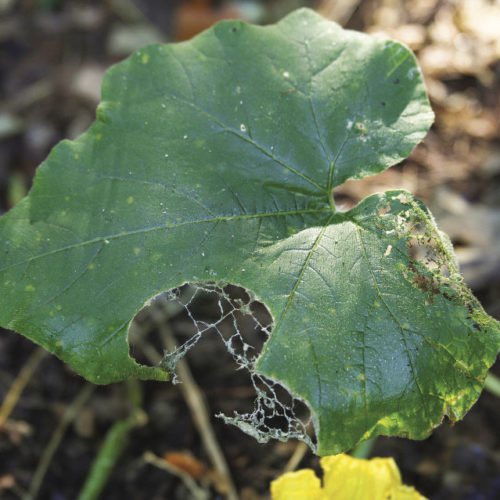 Squash bugs tend to get more attention when it comes to pest management over squashes, but cucumber beetles often cause more damage. These yellow-and-black striped bugs skeletonize foliage (pictured), leaving plants weak and unable to survive. The beetles can also transmit bacterial wilt. Floating row covers can keep the pests away or kaolin clay can be used as a protective film to ward off early damage. 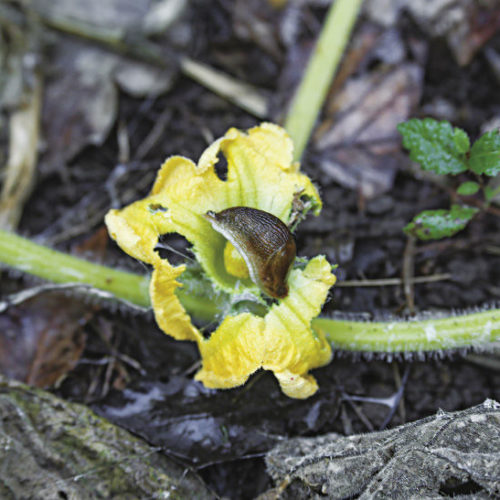 Although squash flowers aren’t their favorite food, slugs can decimate the blossoms overnight, which results in lower yields from the affected plants. Mulching with straw can deter these slimy foes, or you can try using a series of baits or traps to control the local population.

Danielle Sherry is the senior editor, and she gardens under the watchful eye of a local fisher cat in East Haddam, Connecticut.