A return to this beautiful Rochester garden

We’re back for a second day in Dean and Pam Kindig’s beautiful garden in Rochester, New York. 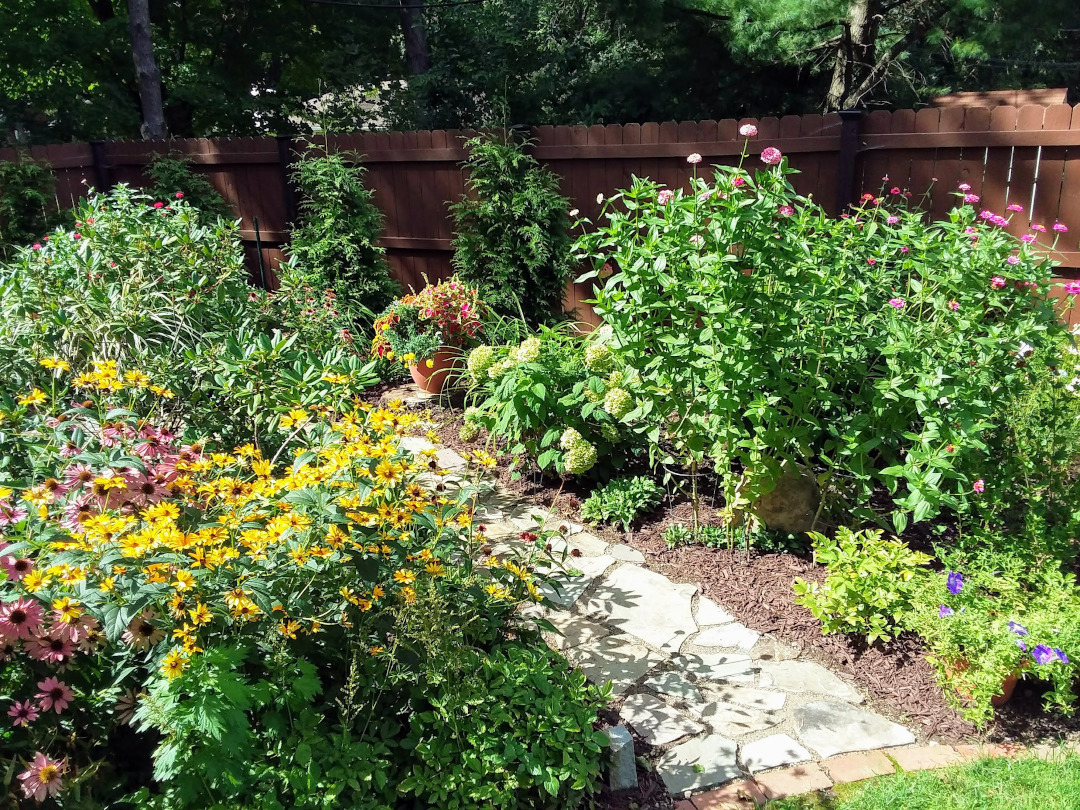 My newly created stone path leads past the white ‘Annabelle’ hydrangea to the right, with yellow heliopsis (Heliopsis helianthoides, Zones 3–9) and purple coneflower (Echinacea purpurea, Zones 3–8) on the left. It parallels the brown fence, then turns left to join the cul-de-sac behind the rhododendrons. The new ‘Mariesii’ viburnum is just out of view to the right of the picture. The annuals are all ‘Cut and Come Again’ zinnias (Zinnia elegans, annual) that Pam grew from seeds bought at the Dollar Store! The ‘Steeplechase’ arborvitae line the brown fence, while a pot of coleus covers a stump of one of the diseased spruces that were cut down. The result was a sunny garden—the yin and yang of Mother Nature. 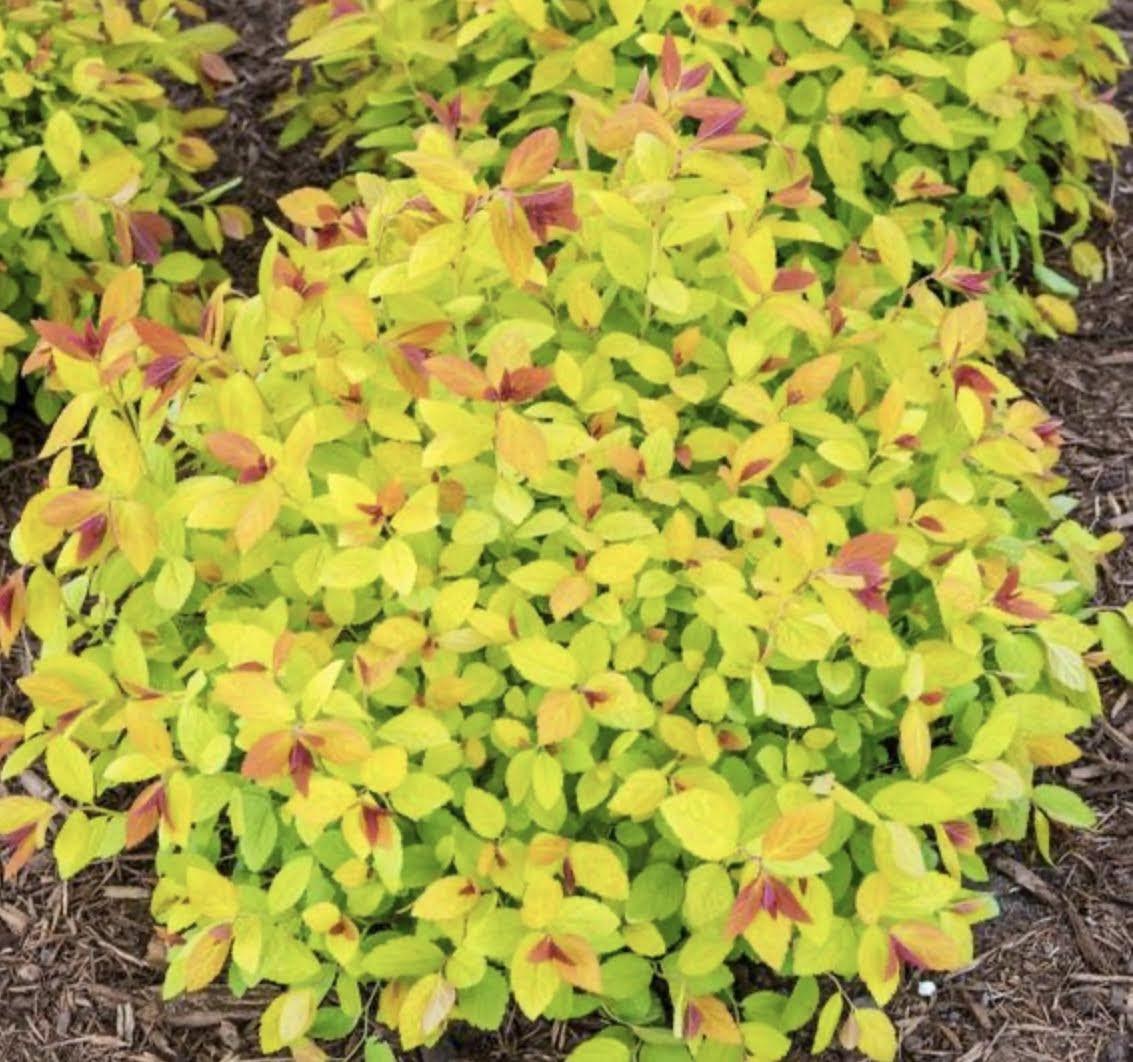 ‘Goldflame’ spirea (Spirea japonica ‘Goldflame’, Zones 4–8) is particularly beloved for its yellow-gold foliage that offers a contrast to the predominant greens found in most landscape shrubs. It is known for the changing colors of its foliage, which begin as bronze-red when they emerge in the spring, then transition to bright yellow-green in summer, and finally turn an attractive copper-orange in fall. I’ve propagated this shrub by layering, so some of them in the yard are my babies. 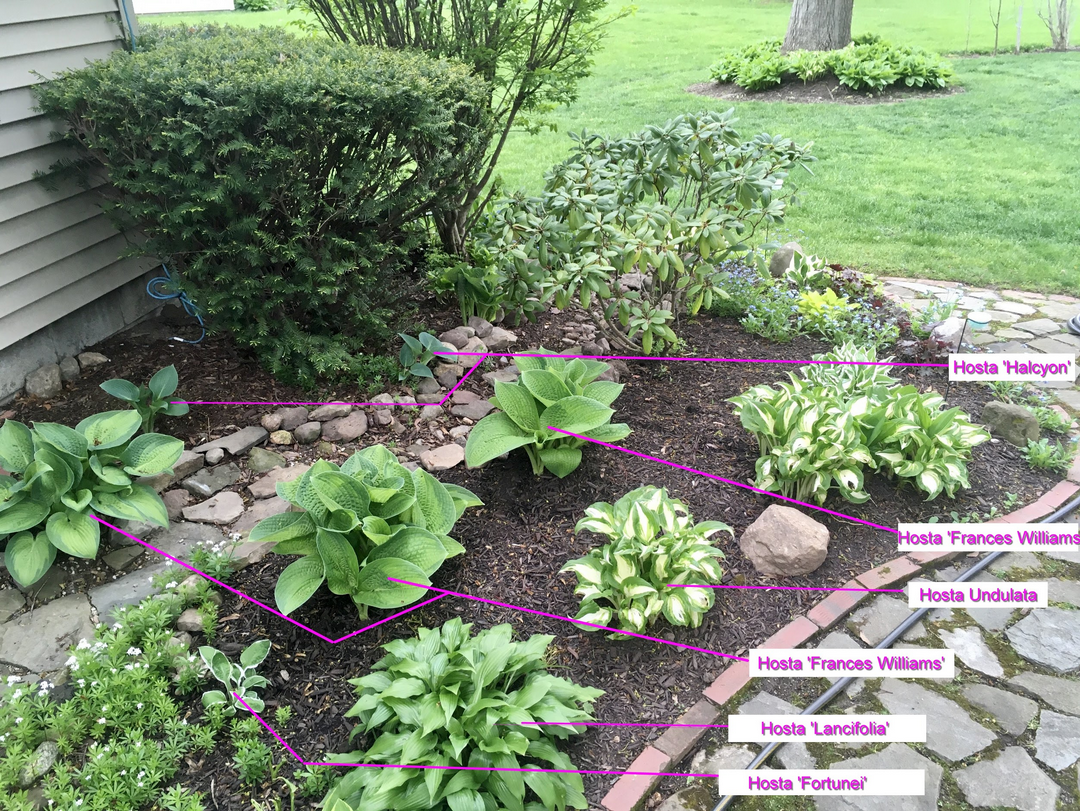 “The Brook” by the dining room window is a dry water feature most of the time, but it carries excess water away when the upper gutter overflows. I needed a place for rocks that weren’t flat enough for the stone paths, and any dug-up small rocks needed a place to be tossed; this was the obvious answer. The white-flowering ground cover I have in there (bottom left) is sweet woodruff (Galium odoratum, Zones 4–8), an excellent choice. Sporting a starry leaf shape, it generally spreads faster than pachysandra or myrtle, and it dies all the way back to the ground each autumn. This is a mid-May picture. The white blossoms on the sweet woodruff last until mid-June, and then the hostas bloom in July—symbiosis. 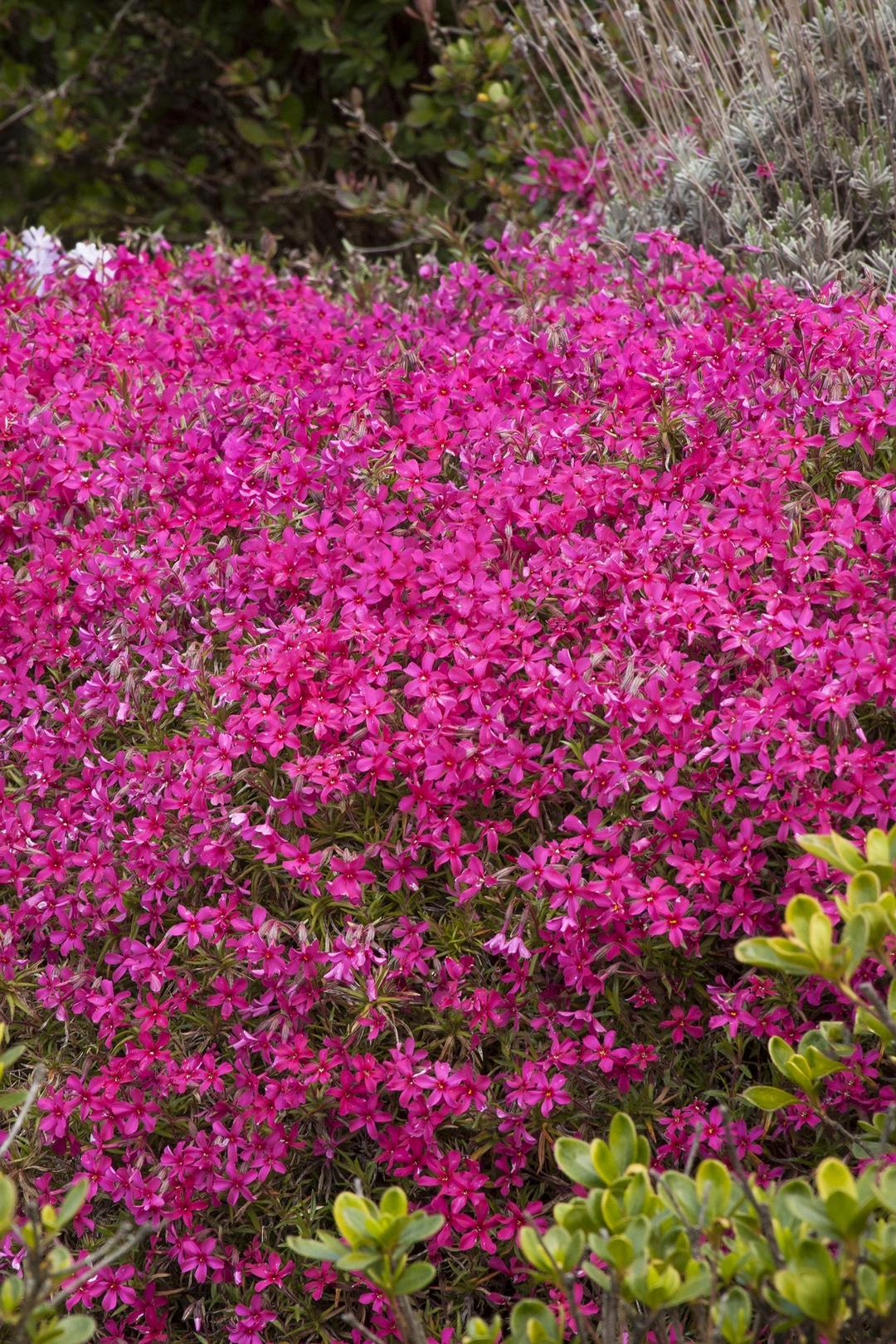 Phlox subulata ‘Red Wings’ (Zones 3–8) has striking pinkish-crimson flowers with a dark red star in their centers. They form a lush, dense, carpetlike mat no taller than 6 inches and spread nicely each year. The name is reminiscent of the Rochester Red Wings, the local triple-A baseball team that Grandpa Kindig followed with passion. The color is intense, making a tremendous impact that can be experienced from quite a distance. I’ve placed it on the back path near the ninebark and paired it with ‘Amazing Grace’ white creeping phlox. Once established, it will tolerate dry conditions and will look stunning with purples and blues (veronica, speedwell, purple lupines, delphinium, etc.). 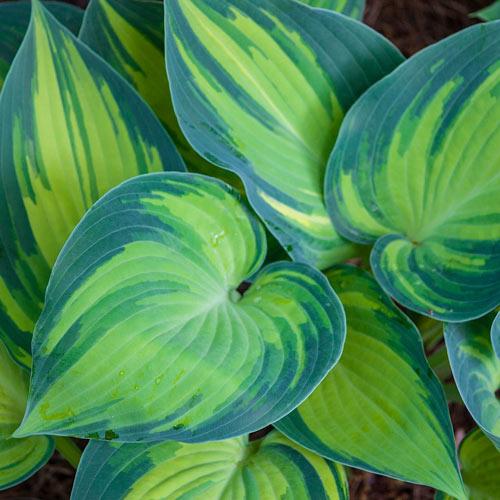 This is a hosta (Hosta ‘June’, Zones 3–8) that Pam and I earlier called ‘Monet’ because it is reminiscent of the Impressionist painter’s artistic style. This striking plant originally came from Hosta ‘Halcyon,’ one of the top blue hosta varieties. Like ‘Halcyon,’ ‘June’ hostas feature artistic blue tints (which I learned is actually a waxy covering on the leaves) teamed up with the chartreuse “base coat.” The waxy texture makes it deer and slug resistant too. 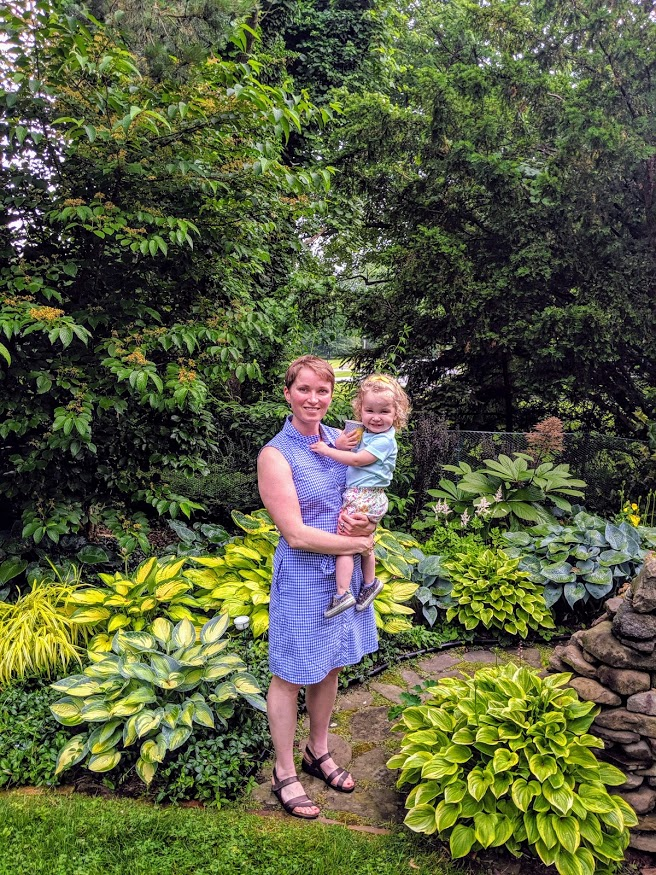 ‘June’ is our favorite hosta, and we have placed it front and center in several locations around the Kindig Gardens. It’s extremely hardy despite its beauty—like all of the Kindig ladies. Eric Kindig’s wife and their firstborn are the lovely models in this picture. ‘June’ hostas grow to a mature height of 15 to 16 inches and, if not divided, form a mound that measures 20 to 30 inches across. Pale lavender flowers adorn a stalk about 20 inches high in mid to late summer. The blue-and-chartreuse leaves provide an attractive backdrop for the lavender blossoms. Put these hostas in at least partial sun to bring out that chartreuse color, and place them near some red annuals (coleus is a good choice) to achieve that red-yellow-blue triangle that garden lovers crave. 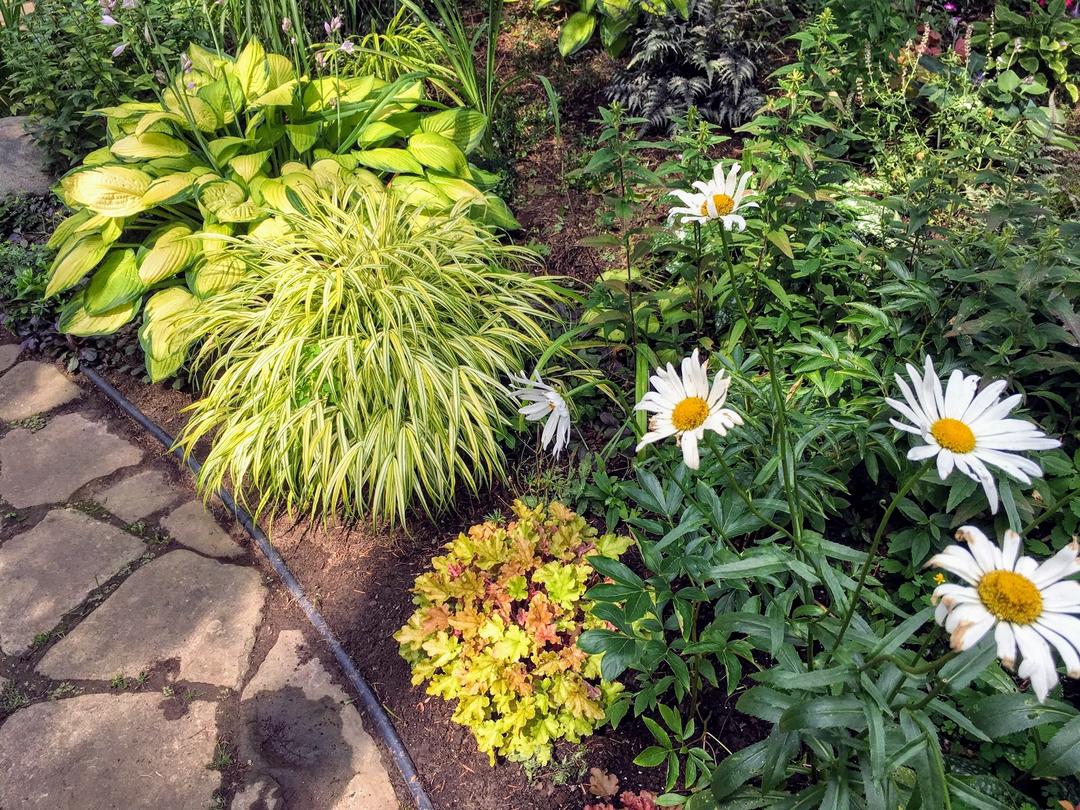 A wonderful complement to the purple coral bells and wide-leafed hostas, the slender spears of golden Japanese Hakone grass (Hakonechloa macra ‘All Gold’, Zones 5–9) are easy to grow, easy to divide, and just stunning to behold. The Hakone grass is named for the Hakone Hot Springs region near Mount Hakone in Honshu, Japan.

Make sure you leave at least one batch of the grass alone for several years, as it forms an impressive mounded “bush.” It requires little care, which makes it ideal for a beginning gardener, or a gardener who doesn’t want to divide plants all the time! Hakone grasses will tolerate sun, but they’re mostly a shade-loving, clump-forming bunchgrass, gradually spreading in circumference. The stalks cascade in a graceful rounded fountain shape, which will remind you of fountains. I’ve put some bunches around the pencil holly in the circle on the back path, but I’m thinking that putting them in a three-to-four-tier permanent planter would be an interesting effect.

Note: A sport of ‘All Gold’, ‘Sun Flare’ takes it to the next level. Its bright yellow leaves are tipped with rich burgundy. I don’t have this variety—yet. 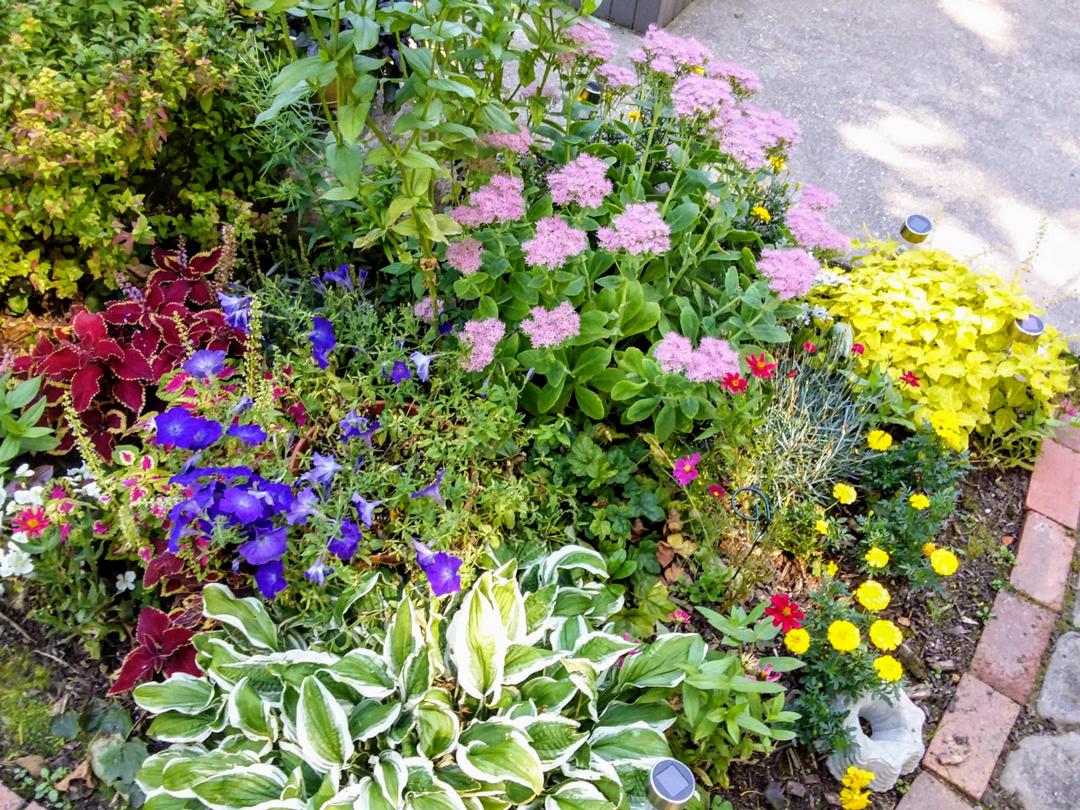 I like the ‘Autumn Joy’ sedum (Hylotelephium ‘Herbstfreude’, Zones 3–8) here, with pink flowers in September, against the bright yellow coleus annual, which was one of the best surprises this year. 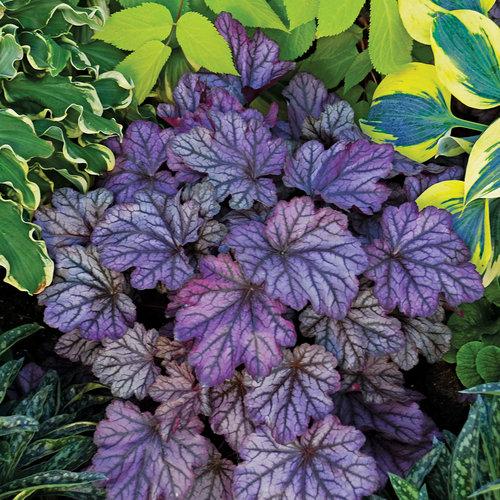 Heuchera ‘Blackberry Ice’ (coral bells, Zones 5–9) After my long addiction to hosta, I was in recovery for about a year when I discovered coral bells. The colors of the heucheras’ foliage were even more varied than those of hostas. I was hooked. The panoply of colors and veining adds interest all season, while the florets on thin stalks rise up from the center with drama, and some varieties make nice cuttings for flower arrangements. They need four to five years between dividings of the rhizomes. These go nicely with hosta, coleus, yellow grasses, and as borders in front of the astilbes. 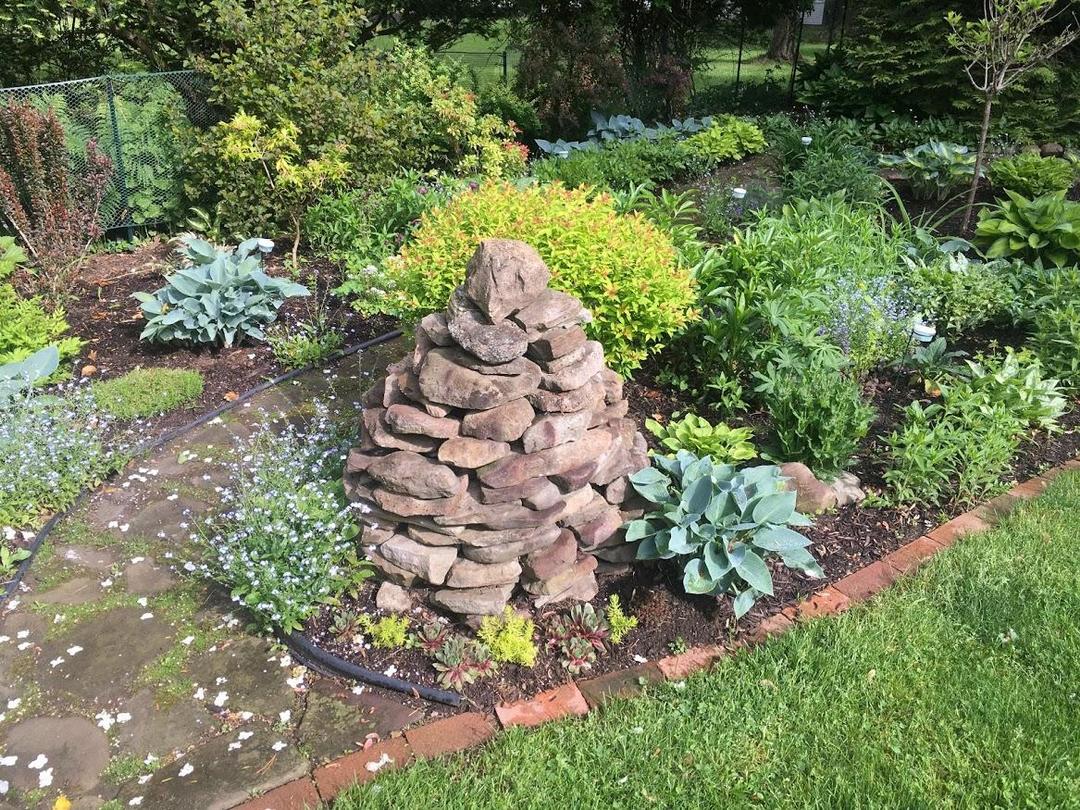 Per Wikipedia, a “cairn” is a manmade stack of stones. Cairns are now often erected as landmarks, a use they have had since ancient times. They have also been built as burial monuments—for defense and hunting; for ceremonies, sometimes relating to astronomy; to locate buried caches of food or objects; and to mark trails. In my case, it’s a tribute. This cairn is at the left end of what I call “Dad’s Garden,” and it anchors the back path. At the foot of the cairn are hens and chicks (Sempervivum, Zones 3–8) and two kinds of Sedum (Stonecrop). My Grandma Greene grew hens and chicks in her kitchen. She kept them on a table in the front window. If she could grow them in her kitchen, I should be able to grow them outdoors in this sunny, protected, warm microclimate. At least one of the rocks in the cairn and many rocks in the path are from the millrace of my Great-Grandfather Philip John Green’s flour mill at Oak Hill in South Dansville, bought in January 1873.