How to Grow Tomatoes in Containers 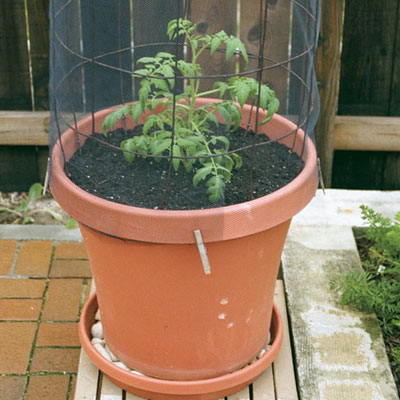 When my husband retired from the Navy and we set about gardening on Florida’s panhandle, tomatoes were high on our list of things to grow. We tried valiantly to rise above our soil, a highly acidic and wormless sand. We built raised beds, added organic fertilizers, and spread rock powders. We made compost as fast as we could gather leaves and grass clippings.

We planted our tomatoes and tended them carefully. They grew, sometimes to astounding size. But they always fell victim to the bacterial wilt endemic to our soil. The tomatoes of our dreams, meaty and juicy with a balance of sweet and acid, always eluded us.

We began with terra-cotta pots and whiskey barrel halves. Both proved impractical. Clay pots large enough to retain water for more than an hour in late July were too heavy to move and big trouble to sanitize at the end of the season. The half-barrels were even more unwieldy. They provided a haven for wood roaches, which like tomatoes almost as much as we do, and they were also susceptible to termites.

When the barrels fell apart in the third year, we sighed with relief and purchased 20-in. plastic pots and saucers. They are colored and styled to look like old fashioned terra-cotta. At the end of each year, we scrub them to remove most of the dirt, mold, and algae, and then drop them into our heavily chlorinated swimming pool for cleaning. Dollies my husband made allow us to move the potted tomato plants around the patio with ease.

Good drainage and healthy roots go together. At first, we tried to achieve the goal by layering pebbles in the bottom of each pot. However, at the end of the season we wanted to dump the exhausted potting mix into our raised-bed vegetable garden. Deliberately adding rocks to our garden beds seemed perverse.

So we moved the river rock into the saucer instead. But we also line the bottom of each pot with a layer or two of plastic window screening, cut to fit. Our soil stays put and drains well.

In heavy rains, we siphon the nutrient-saturated liquid from the saucers with a turkey baster demoted from the kitchen. We recycle the liquid, conserving nutrients and getting rid of the standing water mosquitoes love for breeding.

I found an alternative to rooting tomato plant suckers for a late season crop. When the plants seemed exhausted about the end of July, I pruned them to a few short stems sprouting suckers. This removed the flea-beetle- and fungus-infested old growth. Because it seemed impossible to improve the weary soil in each pot with my preferred organic amendments, I dissolved magnesium sulfate crystals in water, along with several tablespoons of calcitic lime, and poured a gallon of the solution into each pot. A week later, I used a liquid commercial product with an N-P-K ratio of 20-20-20 to get the plants moving again.

In less than a month, small tomatoes formed on new growth. And soon there was another crop, though not as tasty as the first. Cutting weather-weary plants back is practical, however, only if the plant’s vascular system is healthy. The magnesium and calcitic lime treatment may need to be repeated if leaves lose color or growth seems slow. If this doesn’t work, try pounding on their chests.

Add a proper mix to every pot


Early in the year we purchase our potting mix and begin to improve it. We want to provide the tomatoes with the calcium and magnesium they will need later, so we thoroughly blend 1 cup of dolomitic limestone into each 40-quart bag of potting mix. In addition, we stir in a half cup of iron and trace elements, supplied by a product called Perk. We store the mixture in covered trash cans to mellow.

For the next several months, we turn our attention to growing our seeds to transplant size, with a stocky stem and four to six true leaves.

At planting time, we improve the potting mix again, drawing on a balanced organic fertilizer we’ve already prepared and stored. The recipe calls for 4 cups of soy meal and 2 cups of blood meal for nitrogen; 3 cups of bone meal for phosphorous; 2 cups of kelp meal and 4 cups of greensand for potassium. This homemade blend provides slow-release nutrition. We add 2 cups to each 40-quart bag of potting mix. We improve the potting mix in two stages because the dolomitic limestone can prematurely activate the nitrogen.

Fill the pots with soil as the plant grows

We fill each pot with 6 in. to 8 in. of potting soil and set a transplant at the bottom of the pot. As the tomatoes grow, we trim the leaves from the stem and add more of the enriched soil mix until the pot is filled. This practice helps build root mass along the stem as it is buried, which is similar to laying the stem in a trench.

This method also allows us to plant earlier. Since the plants stay below the pot rim for a couple weeks, we can cozy the plants in old mattress pads if there’s a cold snap or cover them with old shower curtains if there’s a deluge. Best of all, we can tie layers of nylon netting over each pot to keep early insect marauders at bay.

Netting keeps insects out of range

When the pots are filled with soil, we insert a cylinder cage made of concrete reinforcing wire. For the final touch, we use black nylon netting as a defense against bugs. We buy two 72-in.-wide yards for each pot and enclose the cage with netting, clipping it in place with clothespins around the rims. Heavy rubber bands keep the top closed.

White flies and aphids can still get through the netting, but really voracious predators like tomato worms and stink bugs are kept out. This slight edge can mean the difference between success and disappointment.

We learned this lesson the hard way when we took a week off to visit our son. We could arrange for watering, but nothing could protect our plants from the ravages of caterpillars during our absence. We found hundreds chewing away when we returned, and even quick action with Bacillus thuringiensis (Bt) could not undo the damage. The netting also helps keep the sun’s rays from scalding the fruit.

Some vigilance is still required, for an occasional enterprising moth will succeed in laying an egg or two. The damage becomes apparent when mysterious holes show up in a leaf here and there. We then act to remedy problems. Insecticidal soaps and Bt can be applied through the netting. We need only unclip the clothespins to side­­dress our plants, prune, or pick the fruit.

Never mind the work involved here and hang the expense. Every time we sit down to a bowl of bright red fruit, sun warm and gently seasoned with salt and pepper, oil and vinegar, basil, and a whisper of oregano, it’s Florida sunshine in a bowl.

It’s easy to get excited about the first tulip or even the first dandelion in the yard (OK—that might be a stretch). But what about those plants that don’t get…

If you're searching for gardening gift ideas for Mother's Day, look no further!  A mom who loves to garden will appreciate any of these thoughtful gifts. From plants to planters,…