What Made My Good Plant Go Bad?

As baseball legend Yogi Berra might say, “The beginning is a very good place to start.” The beginning of the diagnostic process is recognizing that there’s a problem. The next steps involve asking yourself a series of questions and researching the answers. Diagnostics does not involve following a surefire set of rules; rather, it is a process that will lead you to the best educated guess. This guess is an important one, however— for, as with medicine, treatment without diagnosis is malpractice. For our purposes, I will be asking seven key diagnostic questions to solve “The Mystery of the Ailing Viburnum.”

One of the most important things you can do is to correctly identify your problematic plant. Suppose you notice that your cherished viburnum is looking a little stressed. What do you do? Although you may be aware that you have a viburnum, which viburnum is it? If you don’t know which viburnum you’re dealing with, there’s not much you can do. This genus contains more than 100 species, each one with its own growth habits and levels of pest and disease susceptibility. Without knowing the identity of your plant, solving the problem is like looking for a needle in a haystack.

In this case, our sickly shrub happens to be a doublefile viburnum (Viburnum plicatum f. tomentosum).

2. What is normal for the plant?

This is a question that comes up again and again, and in many cases, the answer solves the mystery. Sometimes what you view to be a problem may actually be part of the plant’s physiology—like maple leaves turning red in fall. Once you know what your plant is, the next step is to learn how it normally grows. Learning how a plant grows can be a fairly easy task with the help of experienced gardeners and plant references.

Doublefile viburnums have wonderful horizontal branching, showy white flowers in midspring, and red (maturing to black) fruits in summer. This viburnum’s leaves emerge dark green in early spring and turn a reddish purple in fall. It’s a graceful shrub that has several great cultivars, including ‘Mariesii’ and ‘Shasta’, and is suited for many landscape uses.

3. What are the common problems with the plant?

This question can be a double-edged sword since it’s sometimes easy to make assumptions. For example, say you notice that your doublefile viburnum has shoot tips that are hooked like a shepherd’s crook, a common symptom of bacterial fire blight. Don’t jump to conclusions, however, because if you dig a little deeper, you’ll find that fire blight occurs only on plants in the rose family (Rosaceae). Viburnums are in the honeysuckle family (Caprifoliaceae), so the answer to the problem lies elsewhere.

References will tell you that viburnums have relatively few pests, but some viburnums may have problems in parts of the country with the viburnum beetle. Doublefile viburnum does not appear to be susceptible to downy mildew, a fungal disease common on European cranberry bush viburnum (Viburnum opulus), or to powdery mildew, a common problem on blackhaw viburnum (Viburnum prunifolium).

My research tells me that viburnums, in general, are susceptible to two stem diseases: verticillium wilt and botryosphaeria dieback. The verticillium fungus can be fatal. It infects roots stressed by drought and spreads upward in the vascular system, resulting in dieback one branch at a time. Botryosphaeria is a less serious problem. It infects stems during wet periods, then spreads and causes dieback once the plant is stressed by factors such as drought. Also, when heavy pruning is done in the summer, sunscald of the leaves is sometimes a temporary problem.

4. What do you see that looks abnormal?

It is important to carefully observe and list the plant’s symptoms and the location of the damage. For example, if there are signs of insect feeding, note if the injuries are from an insect with chewing or sucking mouthparts and where the injuries are occurring. If there are missing, off-color, misshapen, or scorched leaves, describe if this is happening all over the plant or just on old or new growth. Noting and recognizing exactly what is wrong will help get you further along in your investigation.

Once you have listed the symptoms, you can compare them to the symptoms of the known maladies that affect the type of plant you have. Each problem has a series of symptoms associated with it, known as its “symptom complex.” As you become familiar with a variety of symptom complexes, you will eventually be able to diagnose problems more quickly. The differences between pathological and physiological problems will also become more obvious to you.

Close examination of the doublefile viburnum reveals that the leaves are turning a bit off-color— progressing to yellow, then brown—and eventually wilting, with whole shoots dying back in the shape of a shepherd’s crook. Also, at the base of the affected shoots, there is some rough, cracked bark. If you cut into the wood, there is some discoloration of the vascular tissue (the water-conducting xylem and food-conducting phloem)— a common symptom of some diseases, like verticillium wilt.

5. What is the overall health of the plant?

Before you continue your sleuthing, it’s a good idea to consider the overall health of your plant. If possible, compare the problem plant with a healthy specimen. Check to see whether the leaf size and color of the problem plant appears to be normal, if the canopy is full, or if there are any changes in the growth rate. This analysis will help determine how significant the problem is and what action, if any, should be taken. It will also give you insight as to how long the problem might have been present.

For example, if you measure the space between the sets of bud-scale scars on a twig of a woody plant, you can tell how much it has grown in recent years. A change in the amount of growth does not necessarily mean a plant is unhealthy, but it can be telling and can often be traced to a particular event, such as a year of drought or the installation of a new driveway. Conversely, recognizing normal annual growth can help allay fears that something is seriously wrong with the plant.

Although the twig dieback and discolored leaves diminish this doublefile viburnum’s appearance, the rest of the plant looks normal—at least for now— and it has healthy green foliage. It even appears to be growing enough to require periodic pruning.

6. What are the site conditions? 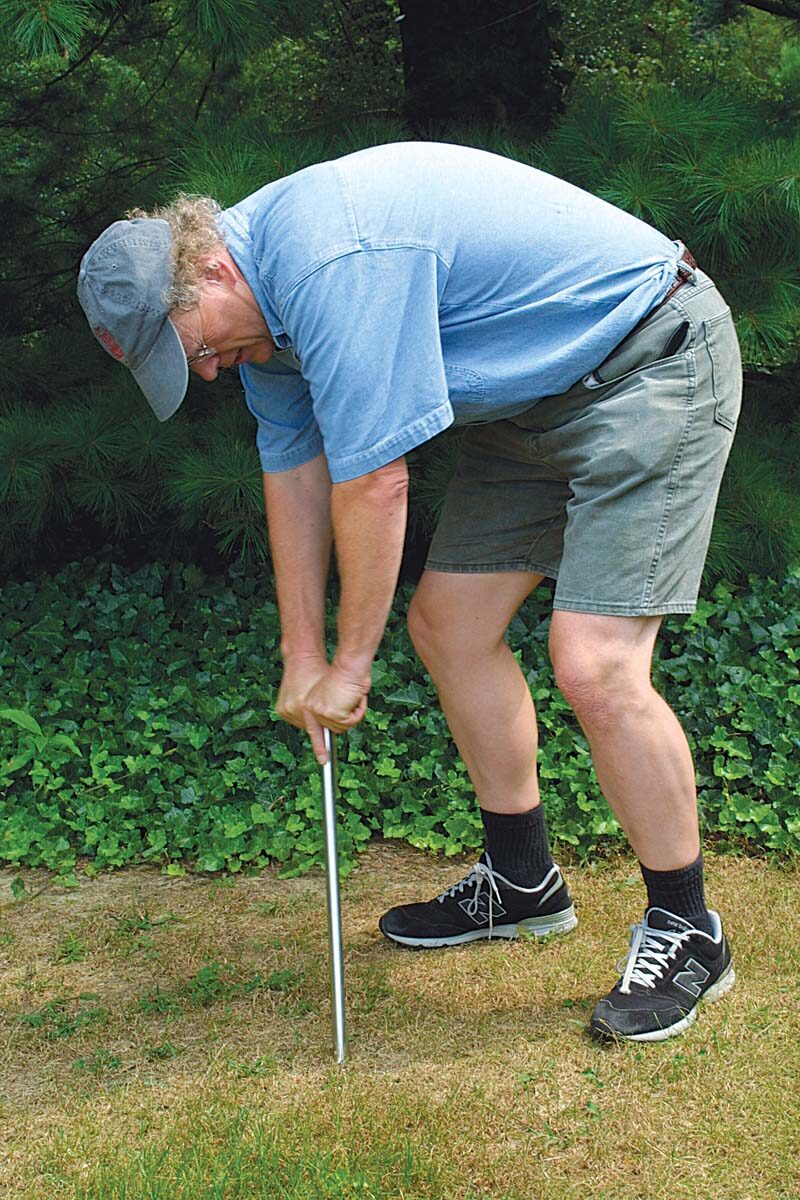 Everyone has heard that it is important to put the right plant in the right place, but sometimes plants are put in the wrong location. That’s why you should study the site to see if it’s meeting the plant’s soil, air, light, and water needs. Your plant could be having difficulties due to poor drainage, not enough soil acidity, too much sun or shade, too much wind exposure, or not enough water. Oftentimes, other plants in your garden will give you clues as well. If you suspect your plant has an iron deficiency due to a high soil pH (too alkaline), check to see if your other acid-loving plants are behaving the same way. Also, look to nearby areas and to the site history for hints. If your plant is dry, perhaps it’s planted under the overhang of your house and is not getting hit by rain. Or maybe your favorite maple tree is declining due to the installation of a septic system three years ago. Signs of plant stress can sometimes take years to develop, and it can take a bit of digging and deductive reasoning to uncover the cause.

Our doublefile viburnum is appropriately placed in full sun. However, it’s planted in compact, heavy clay soil (photo, below right), and the past few summers have been very dry. Further research reveals that verticillium wilt and botryosphaeria dieback—both of which we are beginning to suspect—tend to cause diseases following droughts. 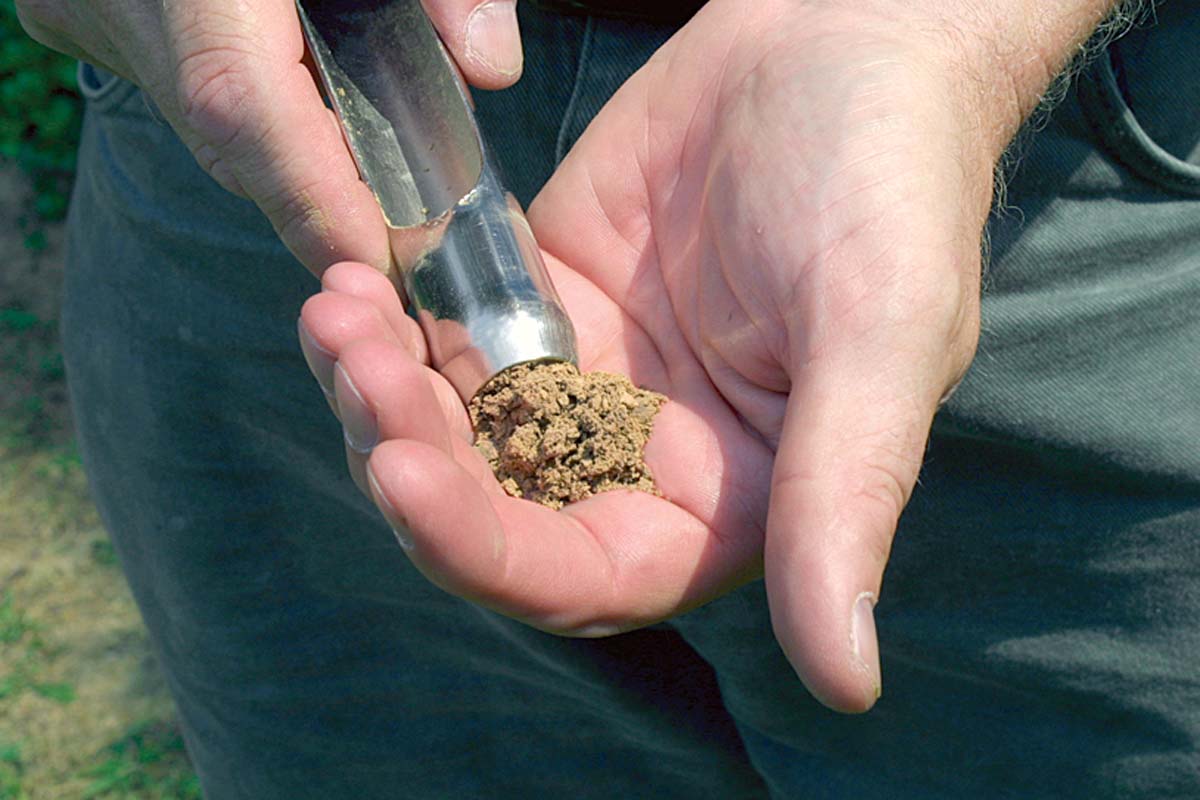 7. What kind of care is the plant getting?

One of the limits of diagnosing plant problems is that our patients cannot talk. A shrub can’t tell us that it didn’t like it when we moved it to the other side of the garden during a heat wave last summer or that we planted it too deeply. When plants show signs of decline, it’s useful to think about how they’ve been cared for.

Recheck product labels to see if the amount of fertilizer you’re applying is too high or if the insecticide you’re using is recommended for the plant in question. Go back to your reference books or garden-center professional to see if you are watering too much or doing something else that has stressed the plant. The idea that “if a little bit is good, then more is better” has gotten a whole lot of gardeners into a whole lot of trouble over the years. Be open to the possibility that the fault for the plant problem may lie in your plant care.

Our doublefile viburnum has had little care in recent years—other than annual mulching and occasional pruning. Since it’s an already established plant, it has not been given any supplemental water, even during the periods of drought the past two summers.

Analyzing your answers will often give you the knowledge you need to find and implement a solution. As with human medicine, the remedy is sometimes simple: Keep the plant as healthy as possible by giving it sufficient fluids, limiting the amount of salt, and using preventive medicine—which sounds about right for both persons and plants. Other times, the problem may look horrendous but have no significant longterm plant health consequences. Look to the resources you have available to help you with the diagnosis. Start with your gardening peers, professionals at your favorite garden center, and the plant-loving educators at a local arboretum, botanical garden, or Extension Service office. There are also a number of Web sites and books that you can go to for answers (see below).

Since botryosphaeria dieback is not life threatening, I prune branches to a major node several inches back from areas with cracked bark. And then I kick back and enjoy this wonderful and graceful plant.

Here is a list of resources that can help you get to the root of your plant’s problem:

This site is protected by reCAPTCHA and the Google Privacy Policy and Terms of Service apply.
See all newsletters
Previous: Ridding Your Garden of Slugs and Snails Next: Put the Pinch on Pests
X
View Comments