If you want four-season impact in a downsize package, look no further than these nine stunners

My old garden was big. There was room for tree-size lilacs, billowy shrub roses, and rhododendrons so sturdy that you could climb on them. I knew that moving across town would present a list of challenges, but I did not think tracking down small shrubs would be one of them. My new garden is urban and, as you can imagine, quite a bit smaller. One mature lilac would take up half the backyard. I still needed a woody framework for my new space, but I realized quickly that the shrubs would have to fit the new scale.

So began my odyssey to find a good assortment of smaller shrubs to give the garden variety. For the most part, these options had to remain under 3 feet tall and perform a few duties: to flower and to have brilliant autumn color, great leaf texture, or colorful berries. With fewer plants, each one had to play a bigger role. Thankfully, with more and more of us downsizing our spaces, there has been a fantastic increase in the availability of dwarf shrubs, and some are spectacular.

Of all the new shrubs that I’ve tried in my small garden, ‘Bombshell’ hydrangea is the most impressive. It is gorgeously refined with an endless supply of flowers, which are perfectly proportioned for the shrub’s size. The dome-shaped blooms continue longer than any other panicle hydrangea (dwarf or full size) that I have grown—from mid­summer until frost. The leaves even turn bright red in fall. I’ve moved ‘Bombshell’ hydrangea more than once, and it has not complained in the slightest. Trimming it back in early spring (because it flowers on new wood) is the extent of my TLC.

‘Eternal Fragrance’ daphne is not fussy 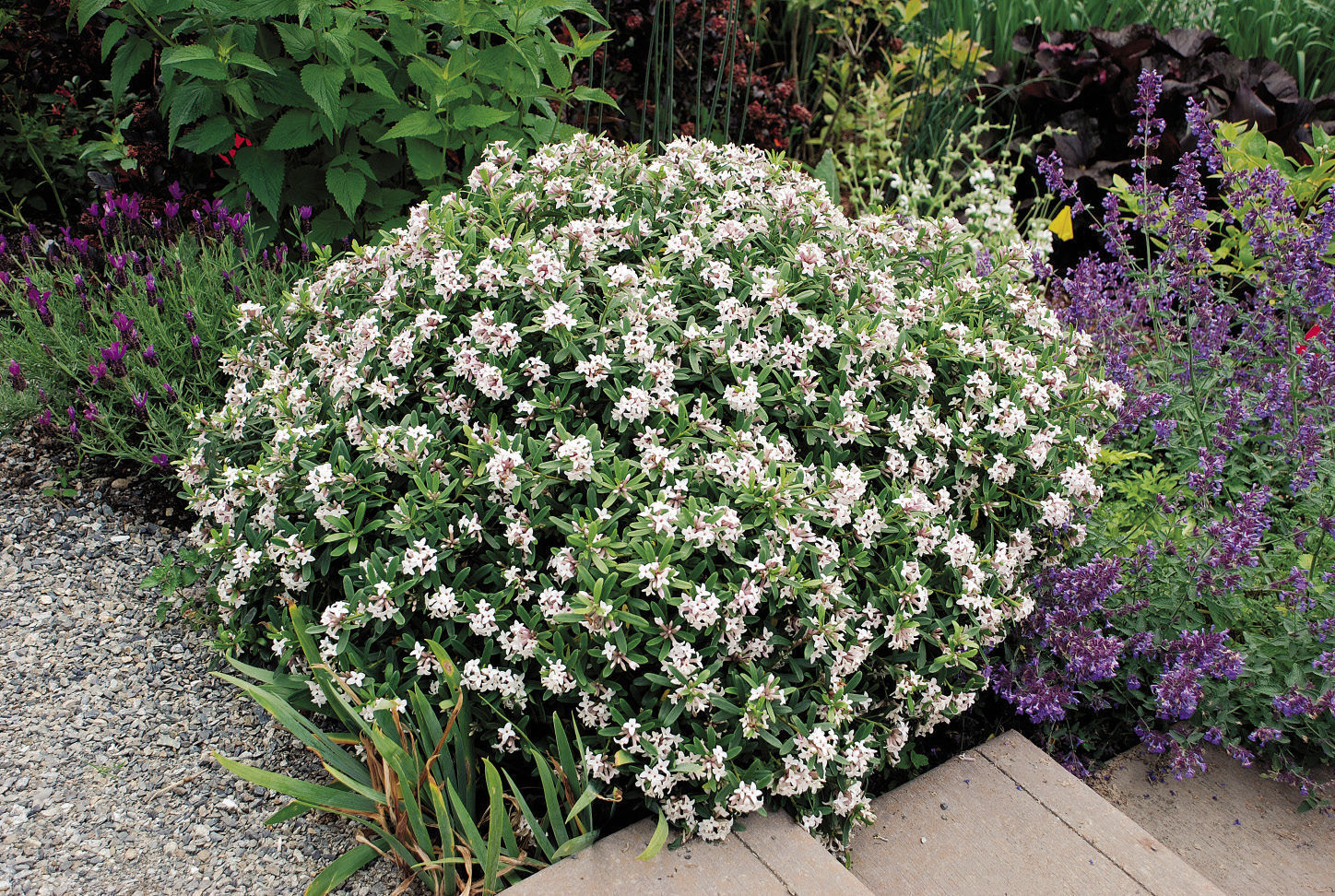 The finickiness of daphne is legendary and, therefore, made me cautious, but the wonderfully scented ‘Eternal Fragrance’ daphne has won my confidence. Although it does eventually reach about 3 feet tall and 2½ feet wide, it’s slow to bulk out. It does require good drainage and wind protection, but that’s the scope of my coddling. The flowers are white with a purplish tinge and an orange eye, blooming heavily in late spring with a few flowers perfuming the air right through summer. ‘Eternal Fragrance’ is also generally evergreen (in Zones 7 and warmer). With a serious cold snap, it loses its leaves but then dutifully puts out new ones in spring. I have never pruned my shrub; I just cut out an occasional wayward stem. 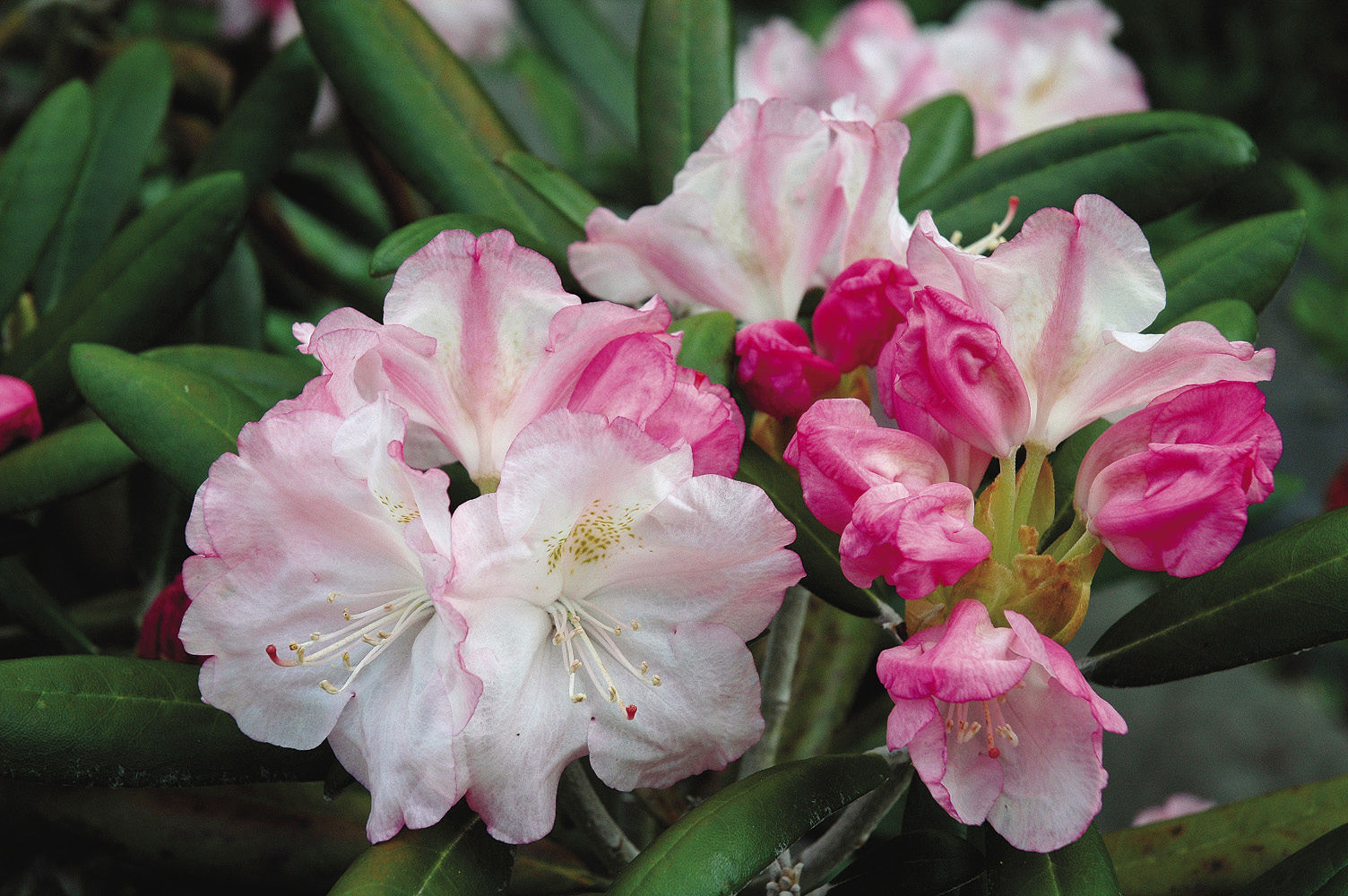 Rhodies tend to be ruled out for small gardens, but ‘Ken Janeck’ rhododendron quickly reaches 2 feet tall and then slows down considerably, reaching 3 feet in 10 years. Maintenance is rather minimal. In fact, I have yet to prune mine but do deadhead on occasion. It’s a stellar mound—regal but not a showstopper—with rosy pink flowers in midspring and larger than average leaves, which are appealingly brown and fuzzy on the underside. ‘Ken Janeck’ prefers dappled shade (though in the Pacific Northwest, I have seen it happy in nearly full sun). Site it at the top of a slope, which makes it easy to see the leaves’ wonderful underside. 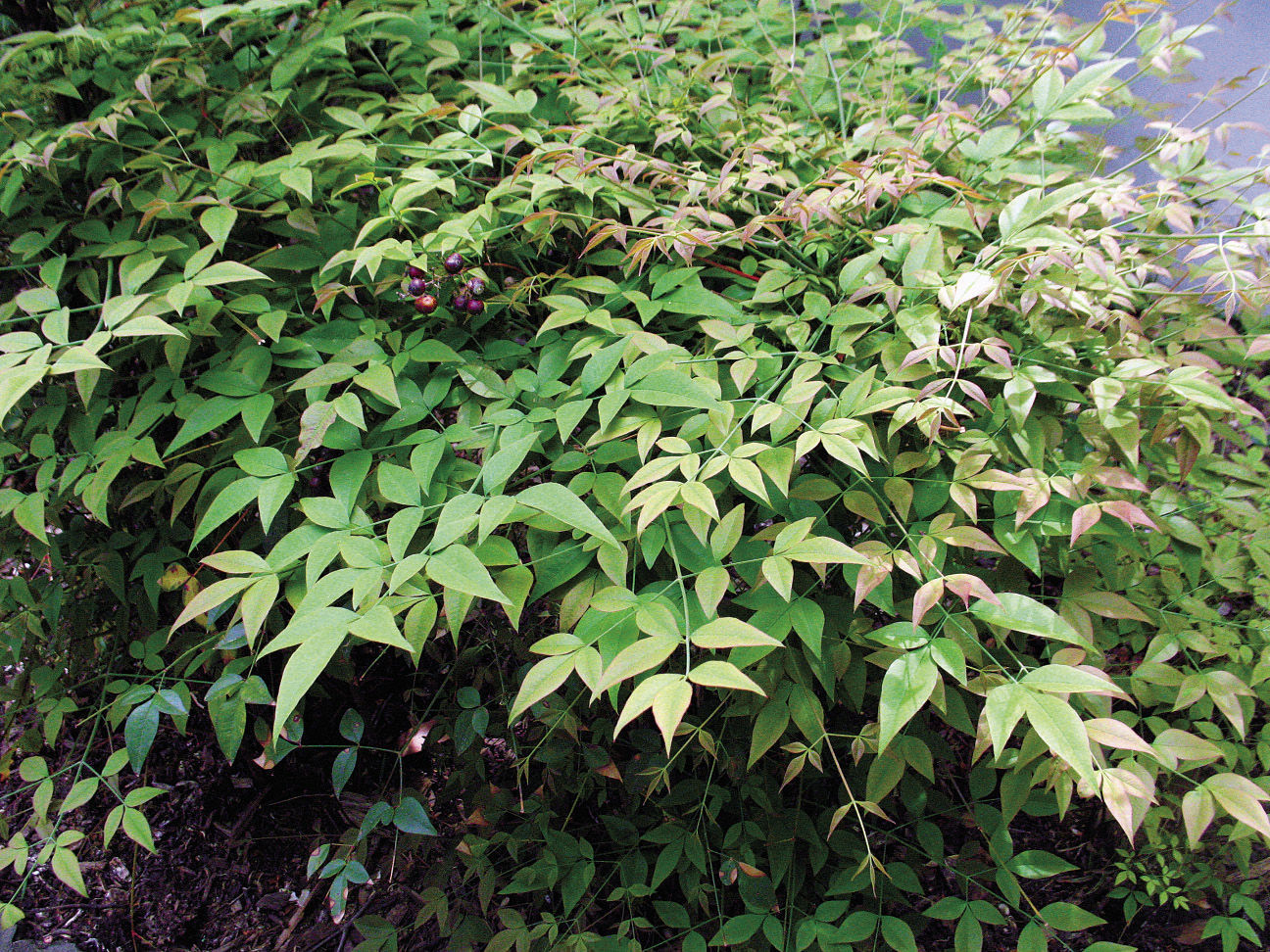 Another evergreen (in Zones 7 and warmer) that provides helpful structure is ‘Harbour Dwarf’ heavenly bamboo. Its branches start at ground level and form a ball of sharply pointed leaves, making it look like a refined porcupine. There are better-known cultivars of heavenly bamboo out there, but I’ve found that none of them is as compact or as tough as ‘Harbour Dwarf’. In the sun, the leaf color is the most dramatic—going from reddish purple in fall to almost pink in spring. This shrub, however, thrives equally well in full shade—a versatility that allowed me to repeat it throughout my entire garden to provide some needed continuity. Its flowers show up in sprays of pinks or white, followed by occasional berries. Heavenly bamboo can be a pesky reseeder, but I have not found this to be the case with ‘Harbour Dwarf.’ 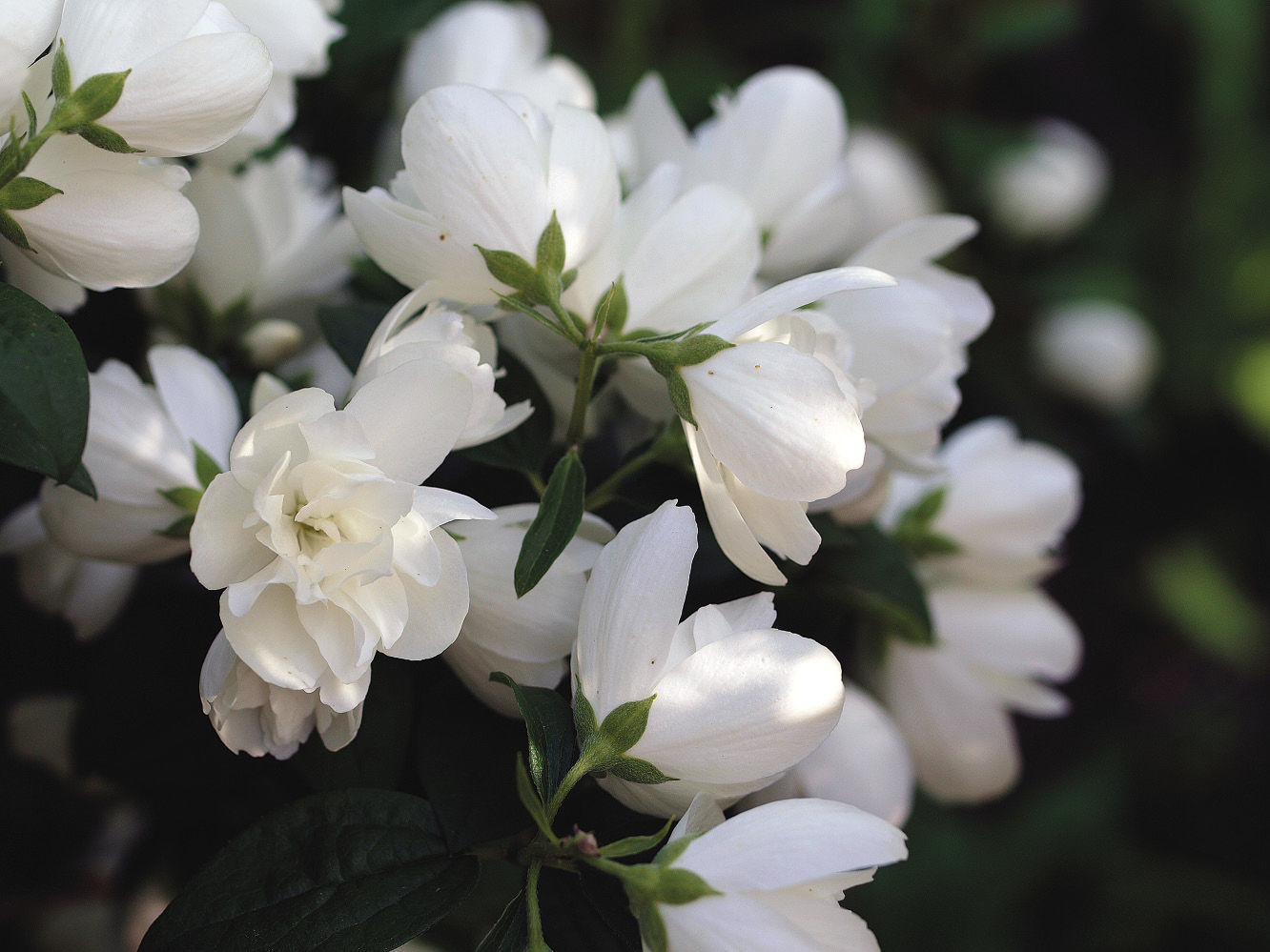 I adore the fragrance of mock orange, but it can easily reach 12 feet tall. Thankfully, ‘Snow Dwarf’ mock orange (above) is a spectacular smaller option. An abundance of fragrant white flowers show up in late spring and are a scent to savor. I trim it back right after it flowers (because it blooms on new wood), but I have seen it cut to the ground in summer and still bounce back impressively. To keep the flower show going, I planted Bijou™ clematis (Clematis ‘Evipo030’, Zones 6–9) next to my ‘Snow Dwarf’ mock orange. The vine scrambles through the shrub, and when its purple flowers appear in summer, it looks like the mock orange has gotten a second wind. 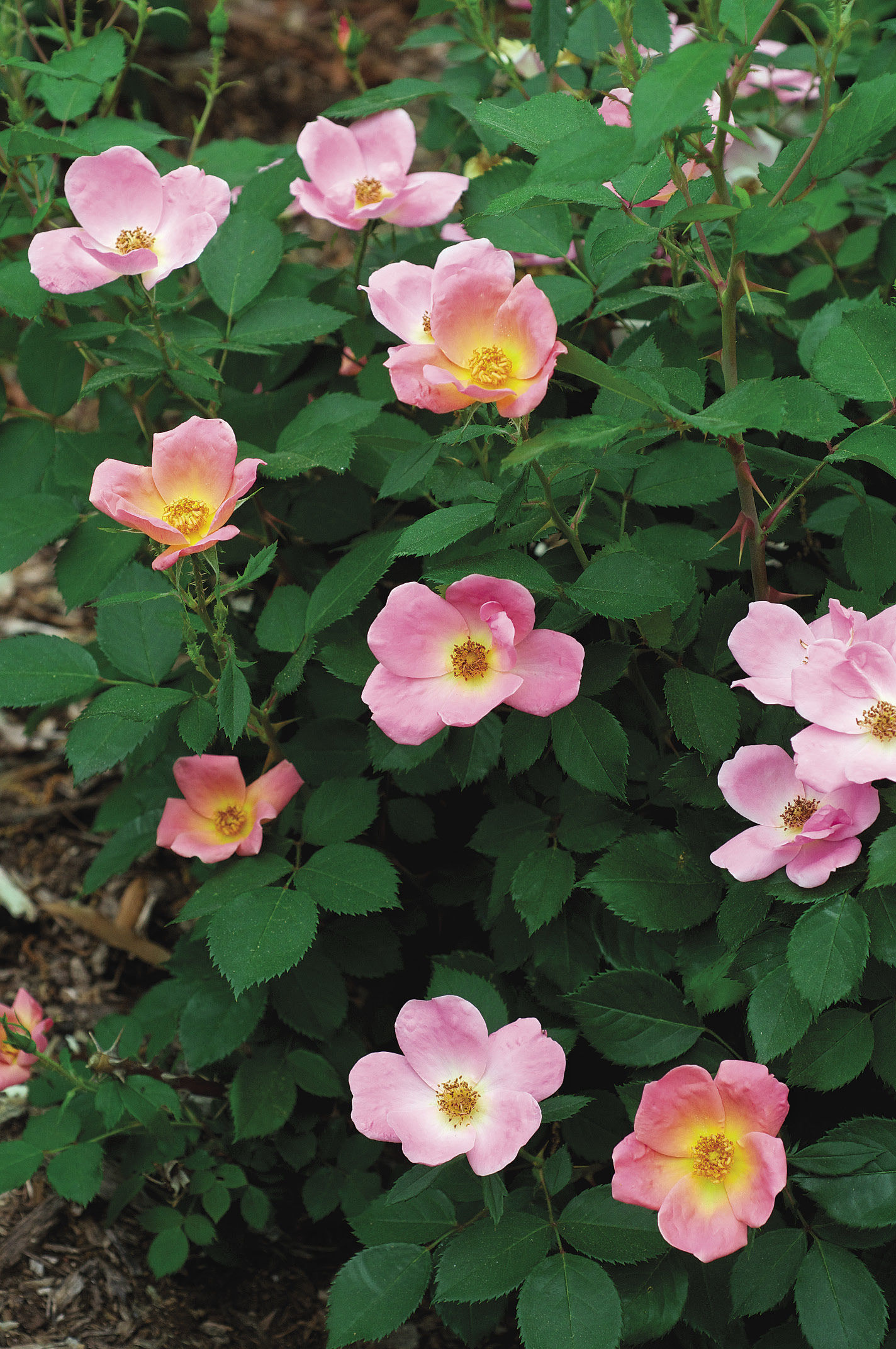 There are countless options of roses under 3 feet tall. After a lot of trial (and error), my favorite is Rainbow Knock Out® rose. Its pale, single, coral pink flowers appear for nearly four months. The leaves are always healthy looking and go a bit bronzy in fall. After several years, I have yet to see any signs of disease, and its annual pruning (a quick trim and cutting out wayward stems) takes less than five minutes. I couldn’t thank it often enough for being one of the best plants I’ve ever bought. Rainbow Knock Out® rose truly tolerates some shade (which is unusual for a rose) and looks as strong and floriferous by itself as hedging rows of vegetables. As a bonus, orange-red hips follow the flowers. 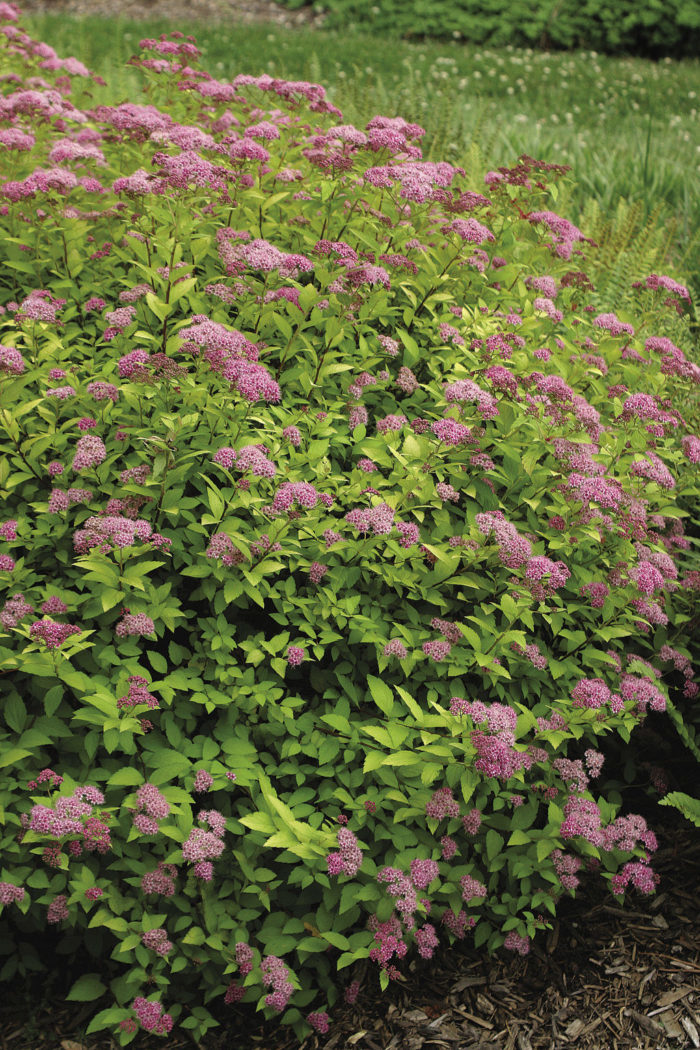 Magic Carpet spirea is just as much of a workhorse as other spireas, but its yellow-orange leaves evolve into a chartreuse-yellow in spring and turn a burnished red in fall. For that reason, this dense shrub deserves its name. The flowers, 2-inch-diameter, lacy pink disks, cover Magic Carpet spirea in early summer and continue sporadically until fall. It looks impressive when paired with any sunset shade plant, like ‘Marmalade’ heuchera (Heuchera ‘Marmalade’, Zones 4–8). Magic Carpet spirea is strong enough to grow in a city park but pretty enough to be in the borders at Sissinghurst. I give it a quick haircut in fall to keep its soft shape. 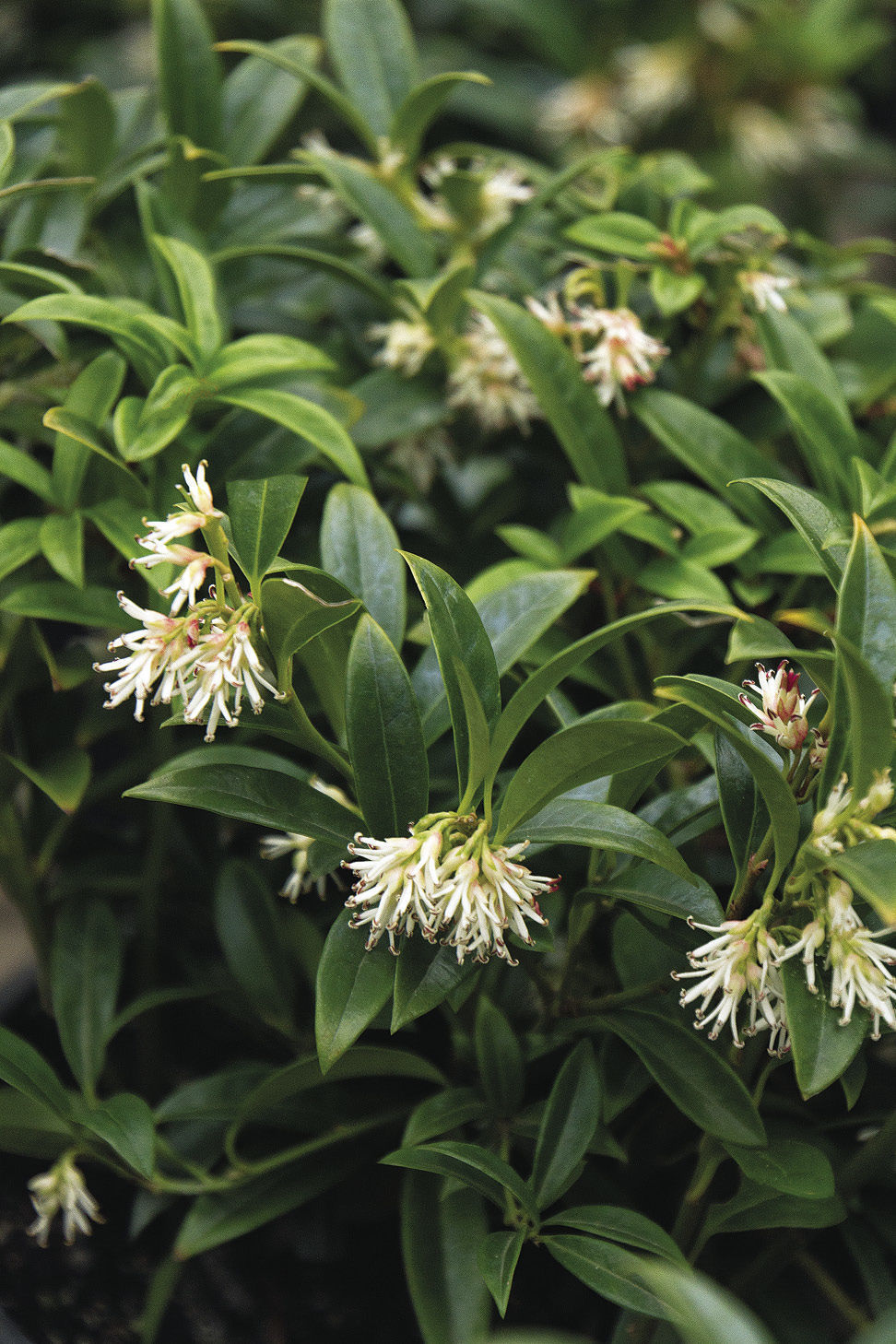 A charming evergreen workhorse in the shade, dwarf sweetbox is perfect for confined spaces. It reaches barely 2 feet tall, and you can let it grow loose and upright or shear it into a hedge. It will slowly edge sideways, but if you pull out the new shoots, it’s easy to keep inbounds. Starting in early winter, the creamy flowers appear. They are quite small but wonderfully fragrant, so put this shrub where you pass by daily. The ½-inch-long, glossy, dark green leaves combine effortlessly with hellebores (Helleborus spp. and cvs, Zones 4–9) and big root geraniums (Geranium macrorhizzum, Zones 4–8), and together, they provide flowers from winter until early summer. Dwarf sweetbox does best in mostly shade; too much sun will yellow the leaves. Shear or shape it as soon as it finishes flowering. 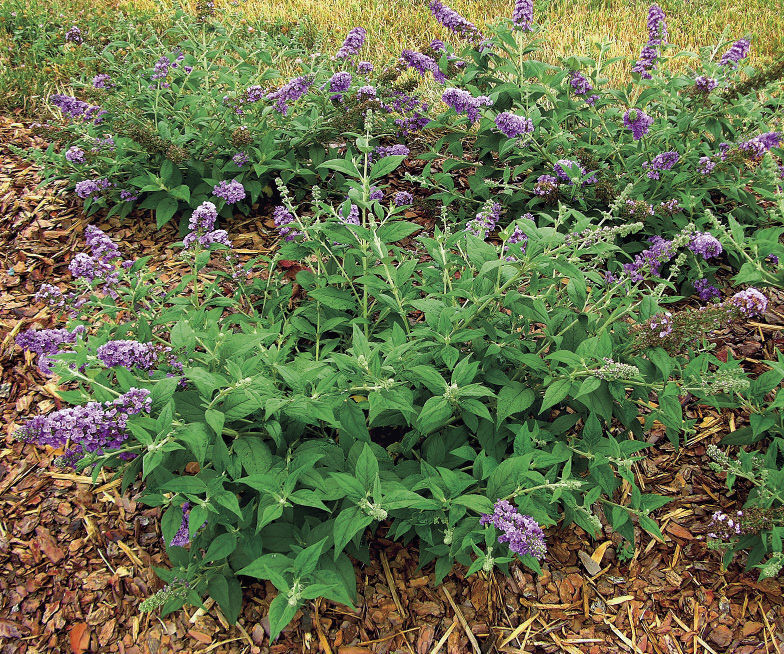 Butterfly bush makes me nervous. Despite its drought tolerance and deer resistance, it can send seeds everywhere and is usually much taller than its label says. But ‘Lilac Chip’ butterfly bush has not committed either of these sins, and it flowers all summer. It has long, triangular, grayish-green leaves and lovely, pale purple spires (there are white, blue, and pink forms, as well). To keep it compact, I give it a hard pruning in early spring every year, cutting it to about 18 inches tall. ‘Lilac Chip’ butterfly bush bounces back quickly, easily reaching 30 inches tall by midsummer. Preferring sun and undaunted by dry conditions, it’s perfectly at home in any sunny border.

This plant is considered invasive in AL, FL, GA, MO, and SC.

This plant is considered invasive in GA, IN, KY, PA, and TN.
Please visit invasiveplantatlas.org for more information.

What is a “dwarf plant,” anyway?

Before you head straight to the dwarf plants at the nursery and load up your cart, keep a few things in mind.

The following plant sellers offer the best selection of the shrubs featured: