How Is Your Soil Texture?

Healthy soil starts with the right proportion of sand, silt, and clay

My friend’s plants were ailing, and she had no idea why. Because I could clench a handful of her garden soil in my fist and form a firm ball, I believed the soil was lacking in organic matter. To be sure, I tested a small sample to determine its texture—the ratio of sand, silt, and clay. As it turned out, her soil was mostly silt, which is easily compacted and poorly aerated. Learn more: Clay busting plants that will break up tough soil.

The ratio of sand, silt, and clay in soil determines its ability to hold moisture and nutrients. The test I use to determine a soil’s texture is a low-tech alternative to sending a sample off to a lab. All you need is a straight-sided jar with a tight-fitting lid (an empty peanut butter jar or mason jar works well), some powdered dishwashing detergent, a ruler, water, a calculator, a soil sample, and a soil texture triangle.

A soil sample should be representative of a gardening area. If the soil in the area I’m testing is fairly uniform, as in a raised bed, I take a sample from the middle of the bed. If the area I’m testing is large, like a lawn, I make a composite by collecting small samples at evenly spaced intervals across the area. I then mix these small samples together to form a representative sample.

To collect an accurate sample, containing soil from where the roots actually grow, I scrape away the first two inches of soil and dig a hole 6 inches down. I place a trowel full of soil (free of large organic matter and rocks) from this hole into a plastic bag and label the bag with the soil’s origin. This is especially important when I’m collecting a number of samples.

The soil must be sifted before testing, so I spread it out on an old cookie tray to dry for a day or so. Once the sample is sufficiently dry, I sift it through a wire-mesh sieve or an old colander to remove small stones and roots and to break down any lumps of soil.

Add soap and water, then shake

After I’ve sifted my sample, I place a cupful of the soil into a straight-sided jar and add a tablespoon of powdered dishwashing detergent. The detergent is a surfactant, which keeps the soil particles separate, resulting in a more accurate test. I fill the jar to the top with water, screw the lid on, and shake the jar for three minutes to thoroughly combine the soap, soil, and water, and to make sure no soil is stuck to the bottom or sides of the jar. I then set the jar on a flat surface to let the sediment settle. See Test your soil sample for instructions on how to proceed.

As the sedimentation progresses, I check the sample periodically to watch the layers form and to note the size of the particles settling out. Sand particles are the heaviest of the three and settle out of the solution after about a minute. The sand layer is coarser in texture than the silt and clay. Silt is the next heaviest particle and will settle out after about an hour. The silt layer is darker than the sand. Clay, the lightest particle in the mix, can take from one to two days to settle out of the solution. The clay layer that settles on top is fine textured and light in color.

Measure each layer of sediment

Amend based on soil type 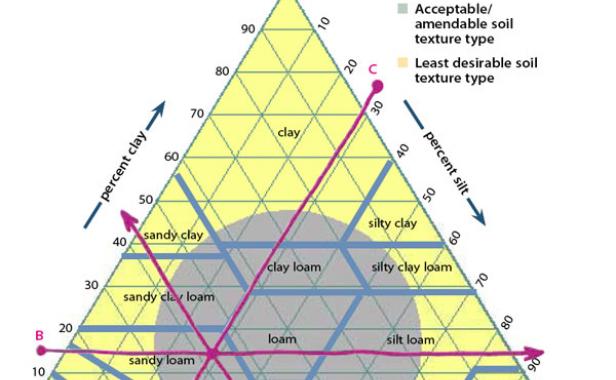 Once I’ve derived the percentage of each particle, I transfer my results to the soil texture triangle to determine my soil type. The chart indicates I have sandy loam.

For general garden use, soils that fall into any segment of the triangle labeled “loam” are good. If a soil tends toward the clay or silt side, soil fertility should not be a problem, but some organic matter should be added to aid in drainage. If the sample is sandy, fertility and moisture retention may be problems. For soils high in clay or sand, I add organic materials to make them more garden-worthy. Organic materials like well-rotted compost and leaf mold will increase the moisture-holding capacity of sandy soil. They will also add fertility to clay soil and reduce its tendency to clump into a monolithic mass of wet, slippery goo in which little will grow.

Analyzing the texture of soil is as important as studying the needs of the plants in your garden, and understanding the science behind soil texture makes that job much easier. Becoming acquainted with your soil may help you discover why your prized rhododendron is doing poorly and why your equally prized pussy willow is doing well. Or you may discover that you possess what every gardener covets—a rich loam in which most garden plants thrive.

Previous: What Happens at a Soil-Testing Laboratory? Next: 5 Tips to Improve Your Garden Soil
X
View Comments