Why Do Greens Bolt?

No matter what you do, when you grow lettuces and other greens in your garden, they will eventually start growing taller and blooming. Most people assume that it’s just high temperatures that cause this to happen, but bolting can be caused by a number of factors. Bolting is no more than the process of a plant setting seed—with one qualification: In the same way that we apply the word “weed” to a plant not wanted, “bolting” is used when we don’t want the plant in question to go to seed. So we talk of lettuce, spinach, mustards, basil, and other leafy green crops bolting—but not tomatoes.

Even though you can still harvest leaves while a crop is bolting, you’ll usually find them not as tasty; they’re often also smaller and tougher. That’s because, during bolting, a plant channels its sugars and other resources upward, as seed production is an energy-intensive process. In lettuces, for exam­ple, the leaves contain a greater level of bitter compounds when bolting than during early growth. These compounds repel some insects—and humans along with them. So in general, your leafy greens will be delectable only as long as they are not yet bolting. You can, in some cases and with a little diligence, stave off bolting for a little while, but once engaged, it’s impossible to reverse altogether.

Because most leafy greens are annuals, they will all bolt within a given season if left to their own devices. During the bolting process, plants have a lot to offer local pollinators. The informed goal is, therefore, not necessarily to prevent all bolting but to prevent premature bolting so that you can get the most out of your plants before they cross that great divide.

All plants have some genetic hardwiring relative to when flowering or bolting will initiate. In some plants, this hardwiring operates independently of any environmental conditions. In others, including many of our vegetable crops, environmental factors do interact with the genotype to trigger bolting. These factors include temperature, day length, and stress induced by insufficient water, nutrition, and—to cite the most modern factor—transplanting. For some crops, only one factor is at work; for others, several. In all cases, a gardener can help offset bolting by choosing varieties with a “slow-bolt” genotype. Additionally, understanding the environmental triggers more deeply can help us manipulate growing conditions accordingly and, thus, prolong the harvestable life of our green crops.

It’s not just hot temperatures that cause bolting

When it comes to the role of temperature in bolting, the devil is in the details. Sometimes it points to planting earlier in spring; sometimes later. Spinach and cilantro, for example, bolt when daytime temperatures get too hot—above 80°F or so. For these crops, it helps to plant as early as possible in spring and to plant early varieties that don’t need as many days to mature, such that they’ll be ready to harvest before the warm days set in.

For summer plantings of plants sensitive to high heat, keep soil cooler with increased watering and mulching. Using shade cloth or planting in shady areas of your garden can also help these greens produce longer.

On the other hand, quite a few crops experience the opposite; it’s exposure to cold, early in their lifetimes, that’s complicit in their eventual bolting, even though it might be weeks away from happening. Cabbages (both European and Chinese types), mustard greens, and other plants in the mustard/brassica family figure prominently here. For these crops, it’s best to plant later in spring or to insulate them with row covers at night. You could also start them in a protected environment, such as a greenhouse or cold frame. Keep in mind that a plant might define “cold” rather loosely; for example, some Chinese cabbages have a bolting threshold of only 50°F. In other words, they are more likely to bolt if, in their youth, they experience several nights below 50°F—pretty warm by most spring standards.

Some plants get hit on both ends of the spectrum, bolting in response to either cold or heat. Arugula and the many bok choi variants are famously in this category. The previously mentioned techniques help, as does planting in several successions, but there’s only so much you can do to keep bolting at bay for these plants.

Day length is even more important than temperature

Day length, more than temperature, is often the hidden culprit in premature bolting—hidden because days lengthen at the same time that temperatures rise, but we tend to notice the heat more than the increasing day length. But while the two occur together as spring waxes into summer, the two can operate completely independently in plants.

In the mid-1990s, William Waycott, a scientist for the U.S. Department of Agriculture, conducted some interesting experiments that proved that day length triggers bolting in lettuce, not high temperatures, as widely believed. He proved this by controlling the plants’ environment in growth chambers. In one treatment, he gave the lettuces only eight hours of light daily, and even when grown at a steady daytime temperature of 90°F, they matured into heads without bolting. In making various manipulations of day length and heat, Waycott concluded that lettuces have a genetically controlled internal clock that keeps a running total of the number of light hours they experience and that flips the bolting switch when that number reaches a certain threshold.

In relation to day length, plants are generally “long-day,” “short-day,” or “day-neutral.” Long-day plants will flower only after being exposed to day lengths longer than a certain critical length; so lettuce is a long-day plant, as is spinach. Short-day plants (cotton, rice) will flower only after being exposed to day lengths shorter than a certain critical length, as in early spring or fall. Day-neutral plants (tomatoes, cucumbers) manifest no flowering response to any changes in day length. Many leafy greens are long-day plants, so they prefer to be planted in spring or fall. You can push the envelope by siting them in parts of your garden that don’t get full sun. If you grow them under artificial lights, leave the lights on for no more than 10 hours daily.

Many plants experiencing an insufficiency of water or minerals—owing to drought, crowding, or being planted in poorly nourished soils—will be more likely to bolt. Leafy greens, in particular, require about an inch of water weekly (easily measured with a rain gauge), which is best administered by midmorning or, if the crop in question is not particularly vulnerable to foliar disease, after mid-afternoon. Better yet, using soaker hoses (versus overhead watering) will free you up to water whenever you want and will water more effectively, thus providing a better buffer against bolting. Mulching will help, too.

A soil test can tell you what kinds of minerals you might need to add to your soil to prevent nutrient stress and in what amounts. It’s best to add nutrients just before planting and, in the case of greens that are in the soil for a long time (such as kale and chard), additionally halfway into the growing season, an inch or two away from the base of the plant. Keep in mind that greens planted densely as cut-and-come-again salad greens are intrinsically overcrowded, so they will need more water and more nourishment than those planted more sparsely to allow for their full size.

I think of lettuce as the Lazarus of the transplant scene: It will go to the point of hell and back during the transplanting process and be none the worse for wear, bolting-wise. You can transplant it almost any time of day and not water it in immediately—even in 90°F weather; it might look dead the next day, but it will still come back.

Other crops fall more into the kicking-and-screaming-toddler category when it comes to accommodating transition. Arugula and cilantro come to mind as being strongly resistant to transplanting. Even if they look good the next day and so on through the week, the damage will be done, and bolting will be decidedly premature. I never grow them from transplants—I only direct-sow them. On the other hand, there’s an interim category of greens, such as spinach, mustard greens, and bok choi, that can grow to full maturity even if transplanted but only if you take good care to minimize transplant stress by transplanting in the late afternoon (or, second choice, early in the morning). Be sure to handle transplants gently by avoiding touching the roots directly, then plant into wet soil and water in fairly immediately. 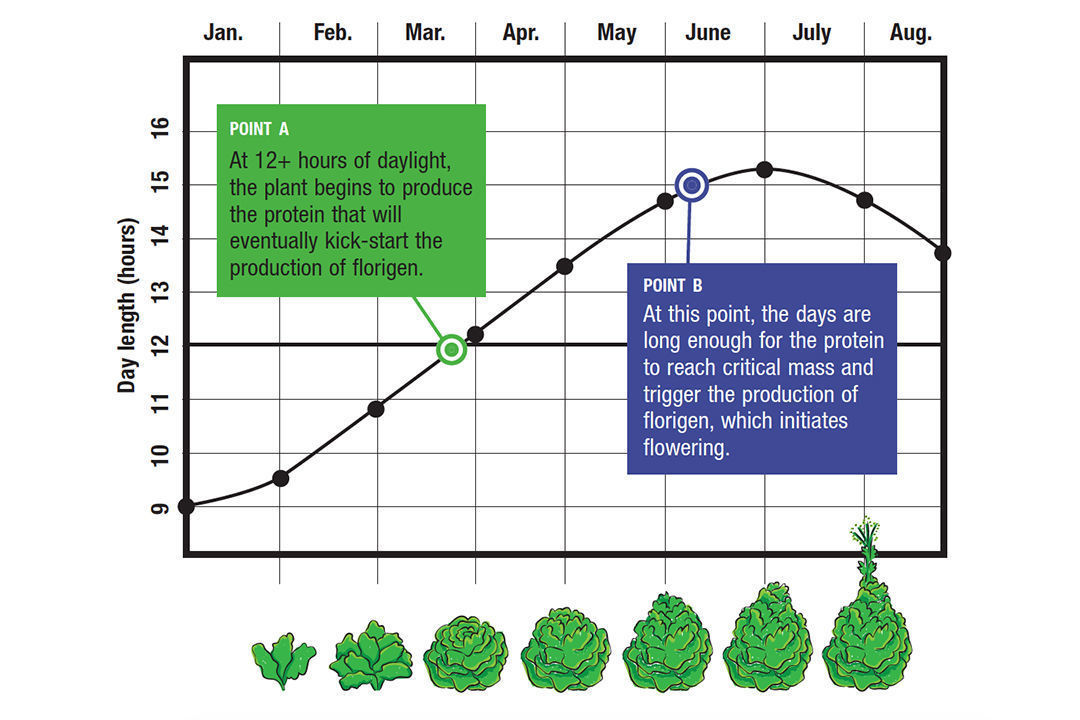 What’s going on inside a plant when it decides to bolt and flower? Turns out the processes involved vary from species to species and are incredibly complex. All in all, scientists have discovered five different internal pathways regulating bolting and flowering. In each pathway, genes, proteins, hormones, and other compounds interact, often in relay or cascading action, to control aspects of the bolting/flowering process.

The “long-day” or “photoperiodic” pathway, for example, operates in the leaves of plants that bolt only when days are long. It’s a marvelously intricate cascading series of responses, starting with the plants’ biological clock. The clock allows the production of a certain protein only when 12 hours have elapsed since dawn (Point A). And the protein is only stable under light conditions. Only a long day, therefore, has sufficient light for this protein to reach critical mass (Point B). When it does, it kick-starts production of a chemical known as florigen, which then travels through the stem to the growing shoot and initiates flowering there.

This site is protected by reCAPTCHA and the Google Privacy Policy and Terms of Service apply.
See all newsletters
Previous: Beyond the Basic Greens Next: Grow Your Own Salad Mix
X
View Comments