Learn How to Thin Vegetable Seedlings

With the right technique, you’ll get healthier and more productive crops

Some people hate to see a plant go to waste, as I discovered one day while thinning chard in the company of an eight-year-old child. Intent on my task, I didn’t notice, until later, that every plant I had pulled and tossed aside had been picked up, carried to the far side of the garden, and carefully replanted.

What seemed hard-hearted to my gardening companion was necessary. Most vege­tables sown directly in the soil, rather than transplanted, will need thinning. Beets and chard, which grow from compound seeds that produce several plants, are especially prone to overcrowding.

In the case of beets, if you don’t thin, you will get all tops and no roots. They must have room to expand underground. With chard, you will get many small, spindly leaves and no large ones with those delectable crunchy ribs. Chard that hasn’t been thinned also has a tendency to bolt.

It’s far better to have one-tenth of the crop flourishing than the whole lot malnourished and spindly. Some gardeners go to extremes in seeding, taking care to place the tiniest seeds just so in the ground to avoid thinning later. But thinning needn’t be a backbreaking task. You can thin many crops, such as radishes and lettuce, while standing and using a garden rake: When the plants are an inch tall, drag the garden rake lightly through the row or bed on the diagonal—first in one direction, then in the other. The rake’s teeth will uproot just enough of the plants, leaving the rest nicely spaced.

Harvest and thin in one stroke

The rake technique works well on lettuce, spinach, arugula, and other salad greens, but I like to thin those by hand when the leaves are large enough to use in the kitchen. Several light thinnings, rather than one heavy one, will provide salad ingredients for several weeks.

The tender young leaves of greens are so good that I often seed salad crops more heavily than necessary to ensure plenty of thinnings. Some root crops can also be thinned by harvesting. Tiny radishes, barely half an inch in diameter, can be used whole in salads. Baby turnips the size of a dime steam up in just a few minutes, and the leaves can be left on. If you want baby turnips, however, be sure to grow a variety intended for that purpose, such as ‘Hakurei’. Standard turnips, such as ‘American Purple Top’, don’t size up until the plants are quite large. They will need to be thinned early, before the roots have formed. The young greens can still be eaten.

No matter how delicious those young greens may be, you need to know when the crop has been sufficiently thinned. Think about the mature size of the plant or root. If you want a 2-inch-diameter beet, leave that much space between seed­lings. If you want a lettuce with a wingspan of 12 inches, give it 6 inches on each side. Carrots can be left half an inch to an inch apart. But a few will wind around each other at that spacing, which is amusing and still tasty. All bets are off with rutabagas; given enough fertility and space to spread, they will get really, really big.

If you direct-sow the seed, then you’ll have to thin the sprouts. Lettuce is a perfect example of a vegetable that needs to be thinned. Once you sow a row and the plants begin to emerge (above left), pull out all but a few evenly spaced seedlings (above right). This leads to a healthier and more productive crop.

Methods vary with the plant

Not all crops should be thinned by yanking excess plants out of the ground, even with a rake. Peas, beans, and all members of the cucurbit family—cucumbers, melons, and squash—have fragile roots. Pulling up one plant is likely to damage the neighbor on both sides because their roots will be intertwined.

If it appears that the peas and beans will be overcrowded, thin them immediately after they germinate, before the roots have spread too far. If you procrastinate until they are a couple of inches tall, thin with a pair of scissors, snipping off excess plants at soil level, rather than pulling them, roots and all.

The same advice goes for weeding. If the pigweed got ahead of you, cut it off. Pulling large weeds from the pea or bean patch might do the plants more harm than good.

Root and salad crops are not as sensitive to root disturbance. But it is a good idea to thin when the soil is damp, rather than dry. Plants will then slip out more easily, and the ones you leave behind will stand less risk of having their roots exposed to air pockets in the soil. If it’s dry when you thin, irrigate the garden as soon as you’re done to resettle the soil around the roots of the survivors.

A special note about carrots: It’s true that the carrot fly is attracted to the scent of carrots, and thinning will release carrot perfume throughout the garden. The carrot fly, also called the carrot rust fly, lays eggs near the crown of the plant; these hatch into maggots, which tunnel through the roots. I’m always careful to take the thinnings out of the garden, rather than throw them on the ground. I also cover the carrot patch with a row cover for several days after thinning to thwart the fly until the scent dissipates.

You can, of course, grant clemency to many of the plants you thin by replanting them elsewhere. Beets are among the few root vegetables that will tolerate transplanting, and chard takes to it nicely. But be realistic. Thanks to my young friend, I had more chard than I knew what to do with that year.

Have you ever pulled out a bunch of carrots or radishes and thought, “What are these weird-looking things?” If so, you probably forgot to thin your crop.

Unthinned root vege­tables become deformed as they develop underground—if they develop at all. These unsightly veggies are still perfectly edible, but they are not as large and are harder to peel, cut, and use in the kitchen.

Thinned plants produce better, overall. So if your carrots in the past looked like they came from another planet, try thinning your plants this year. You will be pleased with the results.

Thinning isn’t optional for some crops

Many vegetables benefit from a bit more space, but several veggies need to be thinned or they will fail to thrive—they may even die. Aside from radishes and carrots, these edibles need your help to reach their full potential. 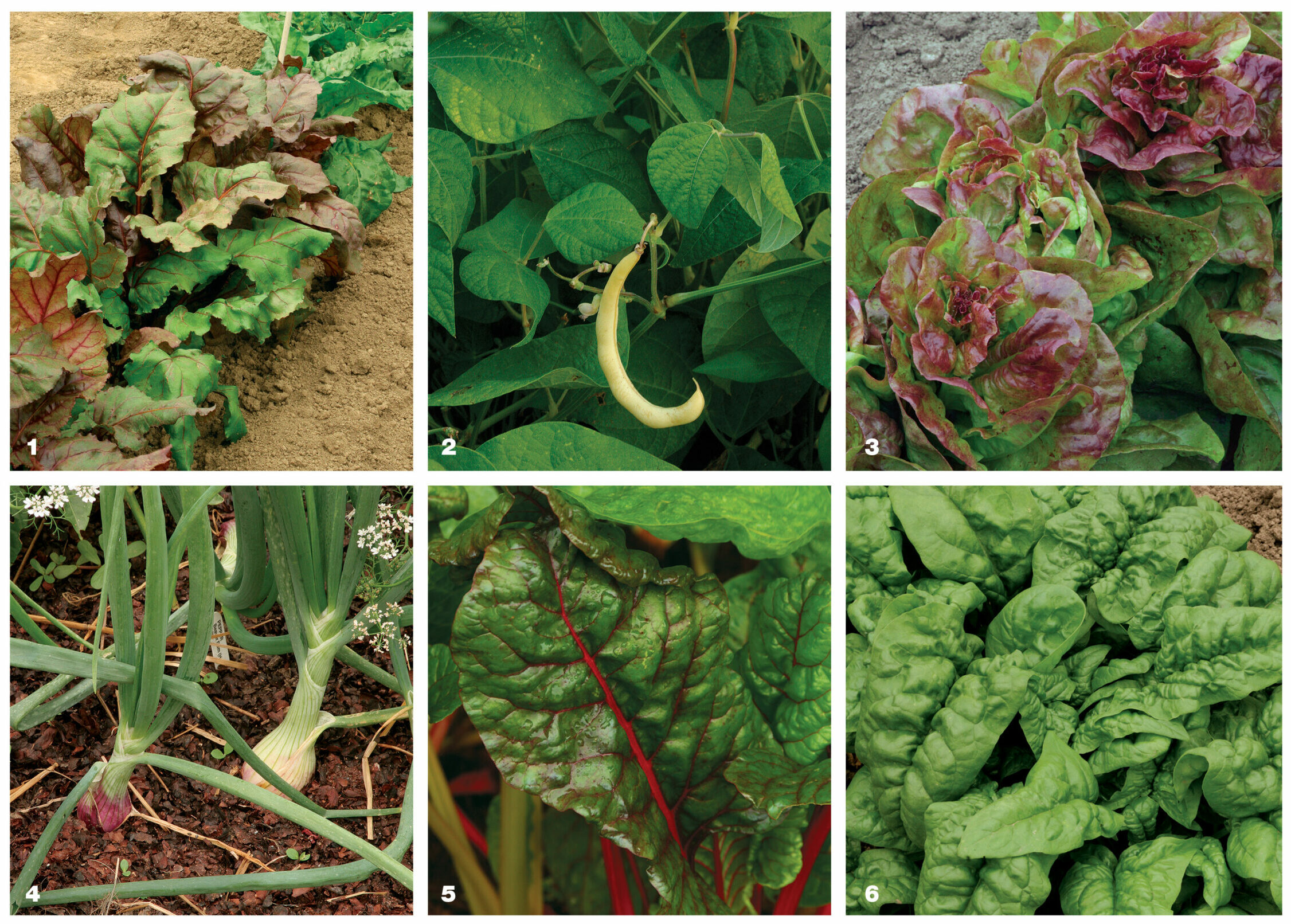 1. Beets
How: Clustered seeds give way to small bunches of seedlings that must be pulled out gently, one at a time, leaving behind just one healthy sprout.
Why: Left in bunches, beet roots will not develop, leaving you with just greens.

2. Beans
How: Once the first set of true leaves appears, space out seedlings so that they are 4 inches apart, using a hoe to pull out the plants in between.
Why: Bean plants will eventually shade themselves out, causing the plants to die.

3. Lettuce
How: Gently running a rake over a row of young lettuce will pluck out random sprouts, leaving behind a semi-thinned patch. Repeat this technique several times over a three-week period.
Why: When left unchecked, lettuce suffers from a lack of air circulation and will rot.

4. Onions
How: Root sensitivity is a problem with this crop, so carefully hold one onion in place while pulling out the extra seedlings.
Why: When onions are crowded and start developing underground, they will become deformed.

5. Chard
How: Chard comes from clustered seeds, so several plants will sprout from a single spot. Pull by hand all but one seedling, leaving 4 to 5 inches between plants.
Why: Large, luscious leaves only develop when given at least a few inches of space; otherwise, the foliage will be small and spindly.

6. Spinach
How: Spinach is fairly hardy, so pull out every few plants by hand or by rake once they are 2 to 3 inches tall.
Why: Foliage will be dwarfed if planted too close together.

—Cass Peterson is a market gardener in southern Pennsylvania.

This site is protected by reCAPTCHA and the Google Privacy Policy and Terms of Service apply.
See all newsletters
Previous: How to Start a Vegetable Garden: Planting Out Next: Build a Bamboo Trellis for Vining Veggies
X
View Comments