The Dos and Don’ts of Growing Herbs Inside

Stack the odds in your favor for year-round flavor

I can think of a lot of reasons to grow herbs in your home. When the ground is frozen and you haven’t harvested anything in months, that’s when you desperately need something savory. Many herbs translate amazingly well indoors; they make handsome houseplants while providing the zing you need to give dinner a kick. Plus, herbs continually produce; compared to supermarket versions, homegrown herbs are economical. But their benefits for your taste buds are just part of the picture. Herbs are deliciously aro­matic; you’ll be sampling their wares whenever you walk by.

A garden of herbs inside is the way to go in winter. I’ve been growing herbs in my Connecticut home for years. I can’t imagine a winter without thyme, oregano, mint, and sage. Want to give herbs a try? Here are some answers to a few commonly asked questions.

Do all herbs grow easily indoors?

I wish. Try though I might, I’ve failed indoors on a consistent basis with rosemary (Rosmarinus officinalis and cvs., USDA Hardiness Zones 8–11). Rosemary loves cool temperatures, great air circulation, and bright light all year. Those conditions are difficult to deliver indoors. Plus, inside it is prone to powdery mildew. Sweet bay (Laurus nobilis, Zones 8–11) is also on everyone’s wish list for full-bodied flavor in winter dishes, but it is extremely slow growing. The plant will have to become a small bush before you can even begin to harvest its laurel-like leaves. And who can easily accommodate something with bush-size dimensions on their windowsills? If I could have basil (Ocimum basilicum and cvs., Zones 9–11) at my fingertips throughout the year, my mozzarella would be in heaven. Not all herbs, unfortunately, are made to be our roommates. Certain herbs—basil being a prime example—do not perform well indoors in low light. Basil acts like a true annual, going straight into flower production in winter rather than making those delectable leaves we love. Several other tender annual herbs are in the same boat. Summer savory (Satureja hortensis, annual) behaves like basil, although winter savory (S. montana, Zones 5–8) is steadfast inside (but, alas, it’s not as flavorful as its fair-weather cousin). Fear not, however—there is a long list of herbs that grow well inside. For a few of my favorites, see the list at the bottom of this page.

These herbs don’t do well indoors

Just how much warmth and light do herbs need?

Although herbs would love to bask on a sunny, south-facing windowsill, they don’t need the high beams. Most herbs perform and produce quite well when grown in an east- or west-facing window. Position them as close as possible to the panes. And don’t worry if your home is chilly. Most herbs prefer nighttime temperatures in the range of 50°F to 60°F; not only will they make compact, tasty growth in cool temperatures, but insects are less likely to be an issue in cool environments.

I don’t have a lot of room. Will one of those windowsill herb kits work for me?

We’ve all seen herb kits with adorable little containers that fit on a windowsill. The idea is great, but most herbs have generous root systems that require ample room. When you cram an herb into a tiny pot, you’re asking for a winter of watering chores. Don’t do that to yourself. Instead, give your herb a container that is deep and wide enough for the roots to grow. Don’t overdo it, though; you don’t want the herb to swim in its container. When you pot up an herb, consider using an organic mix that is enriched with compost; that way, your herb will have the nutrients it needs to produce the flavor you love.

Won’t I use up the herbs in one meal? 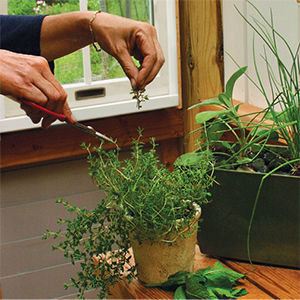 The herbs that I grow are more than one-meal wonders. You can keep harvesting through the long winter months to spice up your life. The more you clip these herbs, in fact, the more they branch out, producing more flavor for your meals. I’ve been nibbling away, for example, at a peppermint plant throughout winter; it started as a single straggly stem and has increased into a dense mat of scrumptious leaves that give my bed­time tea a special tang. And compared to the dried version, a little goes a long way. That’s true of all the fresh herbs I grow; you can use roughly one-third the amount of fresh herbs as you would the dried version to achieve an equal or tangier taste in food and teas. Plus, there’s another benefit for frugal gardeners who grow their own indoors: You can plant them outside when summer finally arrives. All transition beautifully into the garden and then back indoors again the following winter.

Will I have to coddle these herbs all winter? 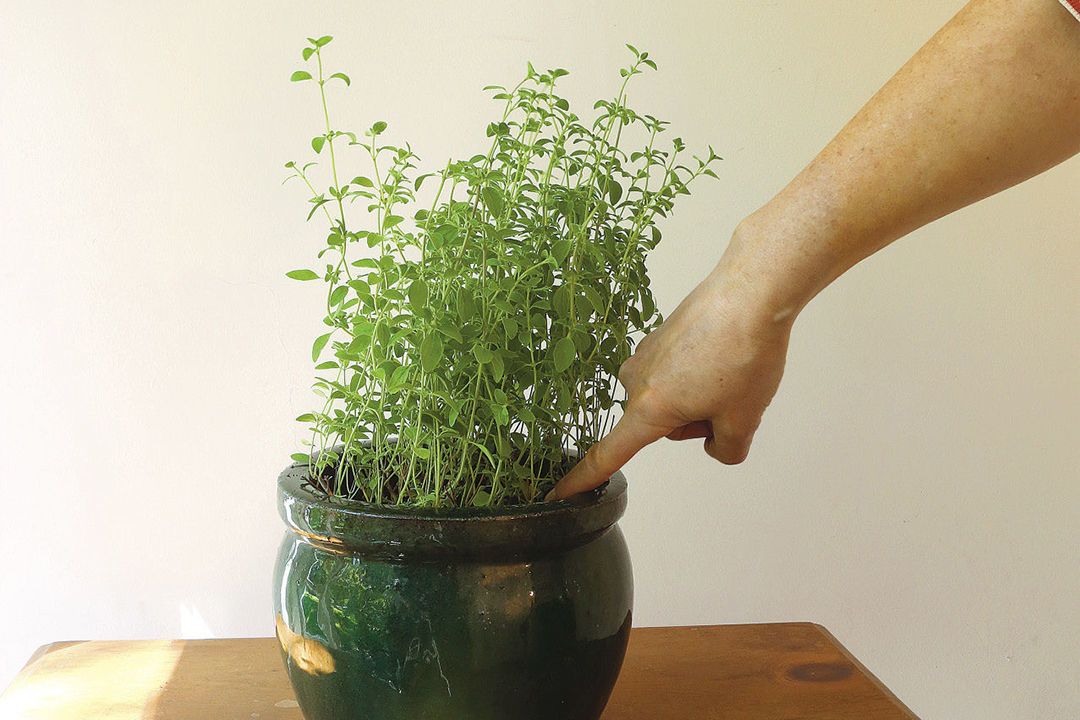 Given the right container and potting mix, herbs are practically maintenance-free. Of course, you’ll want to cut them often with your scissors to use in cooking, but that kind of pruning is welcome. One thing you need to do on a regular basis is to check the soil for dryness. Because sunlight, cloudiness, and cold temperatures affect how often a plant dries out indoors, check the soil regularly by sticking your finger into the pot. Water when the soil is slightly dry but not parched. Most herbs—mint is an exception—do not like moist soil. In addition, most herbs do not need fertilizing during winter, when light levels are low; in fact, herbs are more aromatic when they are grown on a lean diet throughout the year.

The Top 5 Herbs for Indoor Growing

These fragrant edibles are easy to grow indoors and will spice up any winter dish (or doldrums).

Compared to summer savory, winter savory has a muted taste. But during the cold months of the year, this herb is as good as it gets in the savory department. And it makes a rather good-looking potted plant. Although the leaves are not as needle-thin as rosemary, they are slender and brittle compared to the summer version—a trait that makes them rock solid against possible insect attacks. To keep abreast of your harvest, consider bundling several plants together in a slightly larger container. 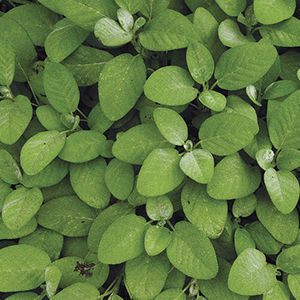 Once you’ve sampled ‘Berggarten’, there will be no going back to plain old sage. The leaves are broader and larger than the species but equally flavorful. If you give it plenty of root room, then you’ll have sage-flavored squash all winter. When clipping off the long leaves, nip the growing tip as well to encourage branching. Bright light will expand the bounty; that said, you need very little to make an impact, so use it sparingly. 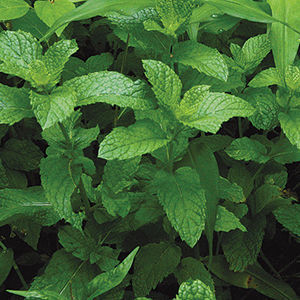 I make my own tea that leans heavily on peppermint (M. × piperita). I keep a couple of containers going throughout the year and snip the herb continually. Give mint a wide-mouth container to increase your crop; the surface roots send up new shoots with lightning speed. Keep your mint generously watered. This is one herb that’s fine on almost any windowsill except a north-facing one.

Oregano has furry, rounded leaves with a trailing habit and a full-bodied taste. In the garden, it can run rampant, but in a container, oregano minds its manners. And a little goes a long way. Oregano likes a lot of room to accommodate its roving roots. Give it a broad container, and don’t fail to water. Oregano can grow in an east- or west-facing window, but a southern exposure will make it really productive.

Although parsley is a biennial and will eventually produce flowers late in winter, I grow it indoors for as long as possible. In a cool house, the inevitable flower spikes (and thinning foliage) don’t pop up until late winter. The plant also grows easily from seed. I prefer the curly version, but if you like the standard parsley, go right ahead with that option. Either way, don’t overwater this herb; it will rot.

Tovah Martin is the author of The Unexpected Houseplant and has grown herbs inside and outside—professionally and at her home in Connecticut—for more than 20 years.

Photos, except where noted: Abigail Lupoff

This site is protected by reCAPTCHA and the Google Privacy Policy and Terms of Service apply.
See all newsletters
Previous: How to Grow Herbs Indoors in Winter Next: Tips for Using and Storing Culinary Herbs
X
View Comments