Scott Daigre is the owner of Powerplant Garden Design, based in Ojai, California.

He also hosts Tomatomania!, the world’s largest tomato seedling sale, and is co-author of the book Tomatomania: A Fresh Approach to Celebrating Tomatoes in the Garden and in the Kitchen.

I live in the Pacific Northwest and always have a hard time getting tomatoes to ripen in our cool climate. I’m sick of just growing cherry tomatoes. Do you have any suggestions for a beefier short-season option?

Tomatoes that are on the small side and that ripen early in the season (like the cherries you mention) are generally the most dependable in your area. While the weather patterns in a given year will have loads to do with your success rate, any short-season tomato—a variety that needs 70 days or less to mature—should work for you.

A beefy option is a tough part. You’ll rarely have any luck with the biggest beefsteaks, but there are some medium-size varieties that are candidates in your area. Keep an eye out for early hybrids, like ‘Sweet Tangerine’, ‘Oregon Spring’, and ‘Jet Star’. While neither beefsteaks nor cherries, choices like ‘Carmello’, ‘Stupice’, ‘Jaune Flamme’ (pictured), ‘Earliana’, ‘Fourth of July’, ‘Champion’, and the classic ‘Early Girl’ could work, as well. An heirloom group commonly referred to as the “Siberians” might also offer you some options. ‘Gregori’s Altai’ (pictured) is one of my favorite medium-size varieties in this group.

No matter what variety you decide to grow, remember that where and how you grow these choices will be important. Here are some tips for success in cool situations:

I need to grow tomatoes in containers because of limited space. I’d like to use some beautiful glazed terra-cotta ones, but I’m afraid that they aren’t the best choice for the plants. What do you think?

First, growing tomatoes in containers (large ones) is a great idea. Second, yes, the kind of pot you use can make a difference in the success or failure of your season. The one you describe might not be optimal—unless you take some precautions.

Although tomato plants thrive in full (hot) sun, the roots want a different situation: deep, cool soil. Trying to accomplish those conditions in pots can be difficult. I’d suggest you use containers that are at least 15 inches in diameter and 15 inches deep (bigger is better) and made out of a material that won’t heat up unbearably during the summer, thereby subjecting the roots to ridiculously hot temperatures. Wooden containers, pulp pots (shown above left), and collapsible felt pots are all good candidates.

Clay pots can heat up quickly. If, however, it makes no sense for you to buy a whole new fleet of pots (or if that glazed pot matches perfectly with your house color), go ahead and plant it up.

Step one: Be sure to provide rich soil for your container. Start with a premium potting soil and then amend with compost or worm castings, just as you would for plants in the ground.

Step two: See what you can do to limit the amount of direct or reflected sun on the pot surface. Mulch the surface area at the top of the container, and push other containers around the tomato planter to protect the sides of the pot from too much sun. This reduces the soil temperature inside the pot, which threatens the roots and, hence, the plant and your success.

I’ve heard that chopping off the tops of indeterminate tomatoes (photo) toward the end of the season will help ripen the fruit that’s left on the vine. Is that true?

If the plant is stopped from creating further top growth and creating additional flowers, then it can concentrate on the task at hand: ripening the fruit. So yes, this approach works and is a great tactic to take. You might want to try the following steps, as well, to ripen the fruit quicker:

Blight seems to attack my plants every year. Is there anything I can do—or not do—to stop this from ruining my crop? 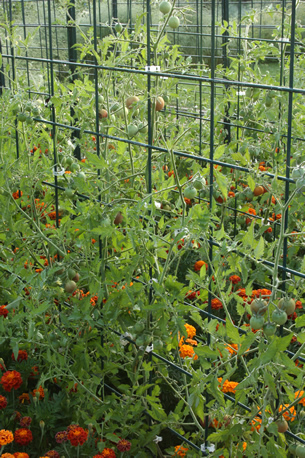 The first step is figuring out which blight you have. Early blight often appears at the start of the season and makes the plant look bad but allows some fruiting. Late blight ruins the plant, the fruit, and your season. I suspect that you’ve battled late blight because your crop has been ruined repeatedly.

Use these steps to avoid the problem in the future:

Grow tomatoes somewhere else. This will avoid any residual bits of the disease being an issue.

Clean up thoroughly—and immediately—when your season ends. Remove all debris and any volunteer seedlings from the garden. Don’t add it to your compost pile. If you’ve grown potatoes in or near this space, get rid of them, as well, as disease might overwinter in forgotten tubers or roots.

Amend heavily, and add a good organic fertilizer. Continue to enrich the soil in this spot with compost all year long. Poor soil heightens blight conditions.

Space your seedlings. Place the plants as far apart as possible to allow for more air circulation between plants and less opportunity for the spread of disease. Six feet or more apart would be sufficient.

Use a rigid grid to support your plants (photo). This allows you to spread the leaves out, rather than bunch them tightly in a cage or similar support, and that will lead to better airflow.

Irrigate on the ground. This limits moisture and soil splashing (and, thus, spreading disease) on the leaves and stems.

Use organic fungicides in rotation and on a regular schedule. And be attentive: It’s easier to control blight if you catch it in its early stages.

If I practice crop rotation, I know that I shouldn’t plant tomatoes in the same spot the following year. But how far away can I plant them? A few feet away? A few inches? I’m not sure what qualifies as a “different location”? 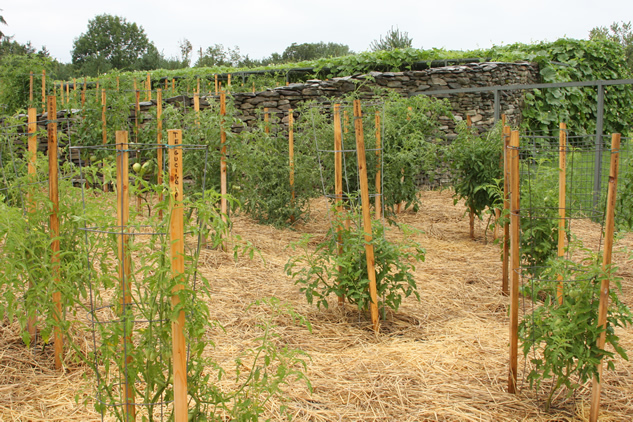 Crop rotation is your single best deterrent to disease or pest problems in the tomato garden. Bottom line: Change the location of the tomato garden as much as you can. With lots of property, that’s easy, right? One year, you plant the front 40, and then the next year the back 40. But it’s not so easy in a smaller garden where we have to basically use the same space each year. If you’re planting in raised garden beds or using multiple garden areas, then move plants each year from one section or bed to another. Moving from one side of a small garden bed to the other might help, but, really, whom are we kidding? You’re still in the same spot. Move those plants as much as you can and then employ these other healthy ideas:

Grow disease-resistant varieties. If you have disease problems that persist from year to year, choose tomato varieties that show some resistance to common tomato problems.

Keep a clean and tidy garden. This is important during the season (photo) as well as after. When the season is over, clean up like a maniac to get any diseased leaves and debris out of the garden. Avoid the compost pile with this lot.

Add compost. To keep the soil active, work in some compost. This will raise an army of beneficial organisms that will battle against disease organisms, fungal spores, and more.

Previous: Protecting Your Tomatoes From Mockingbirds Next: How to Harvest Tomatoes
X
View Comments