How to Grow Sweet Potatoes

These tubers are delicious, versatile, highly nutritious, and easy to grow in a home garden

My cotton crop needs picking about the same time my sweet potatoes need digging. The cotton floats out in the field, white puffs waiting for me. The potatoes lie in the garden, sweet ore hiding in shallow seams. One way or another I always get to both, but saddling up my diesel-powered cotton picker is nowhere near as much fun as grabbing my spading fork. Truth be told, I pick for money, but I dig for love.

I can’t remember life without a couple of rows of sweet potatoes. Dad had them. Dipping into the sweet potato ridge always had an air of mystery as we wondered what was going to turn up: fat knots, or those smooth, tapered nuggets that make such good “baby bakers.”

It’s still that way in my 40-ft. by 70-ft. garden patch in Missouri’s boot heel. George Washington Carver began his research with sweet potatoes by asking, “Sweet potato, sweet potato, what are you?” The famed plantsman found 118 uses for the sweet potato, including as an adhesive. For the home gardener, the answer is that the sweet potato is easy to grow, delicious, versatile, and highly nutritious. And I’m stuck on them.

Sweet potatoes (Ipomoea batatas) are part of the morning glory family and are native to the American tropics. They’re not yams, which are native to Africa and come from an entirely different plant that is seldom grown here.

Sweet potato varieties vary in the color and texture of the flesh. They may be orange, yellow, or white. Some varieties have a dry flesh, while others are moist. The most commonly available varieties are the moist yellow or orange type. I’ve grown ‘Jewell’, ‘Centennial’, and ‘Porto Rico’, all orange fleshed. My favorite is ‘Centennial’. It is a consistent producer of nicely shaped potatoes and is ready about 90 days after I plant.

‘Jewell’ has turned out well for me, but it takes about 100 days to mature. The ‘Porto Rico’ also runs about 100 days, but if you’re tight on space, it might be worth a try because its habit is bushy, not as viney as the others. Several years ago I grew a white-fleshed variety I’d purchased by mistake. The dry texture and the lack of characteristic sweet potato flavor made it a mistake I don’t plan to repeat.

I tried ‘Georgia Jet’ in 1996. They were ugly things, irregular and rounder than I like, but the flavor was delicious.

Growing sweet potatoes is no sweat

The first step toward a bountiful sweet potato crop is getting the soil right. A moderately fertile, sandy loam is best. A soil that is too hard and compact for good root penetration will produce stringy and misshapen potatoes. I test the soil every four to five years and lime and fertilize accordingly. In healthy garden soil, sweet potatoes should produce a good crop with only maintenance fertilizing. I use 12-12-12 or 15-15-15, two common nitrogen, phosphorous, and potassium mixes, on my entire garden in late February or early March so the nutrients will be readily available when I start planting. This will be all the fertilizer my sweet potatoes get. Side-dressing sweet potatoes with additional nitrogen stimulates stem and leaf growth instead of potato development.

Sweet potatoes grow best on a ridge about 12 in. high. I mark my rows with a big-wheeled garden plow. Then I pull up the ridge from both sides with a hoe. The uncompacted soil allows the sweet potatoes to grow smoothly. Ridges should be 36 in. to 40 in. apart. When the soil is warm, above 65°F, and all danger of frost has passed, I set the long, slender sweet potato sprouts, or slips, into the spine of the ridge about 12 in. to 18 in. apart. I use a ½-in.-wide metal rod to make the holes.

I fill the hole with water, insert the slips to about half their length, then firm the soil. The plants, each of which should produce no fewer than three potatoes, should be watered well until the roots start growing, about a week. After that, all that’s left to do is control the weeds and water as needed, backing off toward the end to prevent the sweet potatoes from splitting. Once the plants begin to vine, controlling the weeds is easy because they get shaded out.

Three months in the ground and they’re done

The longer they grow, the sweeter the potatoes become. Some people like small potatoes, or “baby bakers,” which are 3 in. to 4 in. long. Unfortunately, they don’t whistle when they’re done just right. If you’re really anxious, you can gently dig into the ridge with your hand and feel for doneness. If they’re not ready, just cover them up and keep waiting. I like to wait until shortly before frost to harvest my potatoes. I begin by shearing off the vines. If local regulations permit, they should be burned to help prevent disease build-up.

Using a shovel or spading fork, I dig into the ridge. I try not to bruise the potatoes, because the damage will encourage rotting in storage.

Once the potatoes are out of the ground, they need to be washed, dried, and stored. I spread the potatoes out on a grassy area in full sun, spray them with the garden hose, and leave them to dry for four to five hours. Then I place the potatoes in shallow containers and put them in my shed, where they will stay dry and have good air circulation. I let them “cure” for about 10 days, which reduces the moisture in the potatoes and toughens the skin. They store better this way.

After they cure, I store them in boxes in a dry, well-ventilated, cool area; about 60°F is ideal. I can keep them that way for eight to nine months. I try not to handle them too much. They bruise easily.

Wrapping each potato in newspaper helps them keep longer. You’ll want your sweet potatoes with you not only at the holiday table, but throughout the year as well.

Sweet potatoes don’t have eyes like the other potatoes. But that doesn’t mean you can’t perpet­uate your own crop. You just hold back some of the harvest and plant the sweet potatoes about 2 in. deep in a box containing sawdust or a mixture of peat moss and soil. The box should be kept in a warm place, about 75°F. Do this about six weeks before you need the slips to put in the garden. 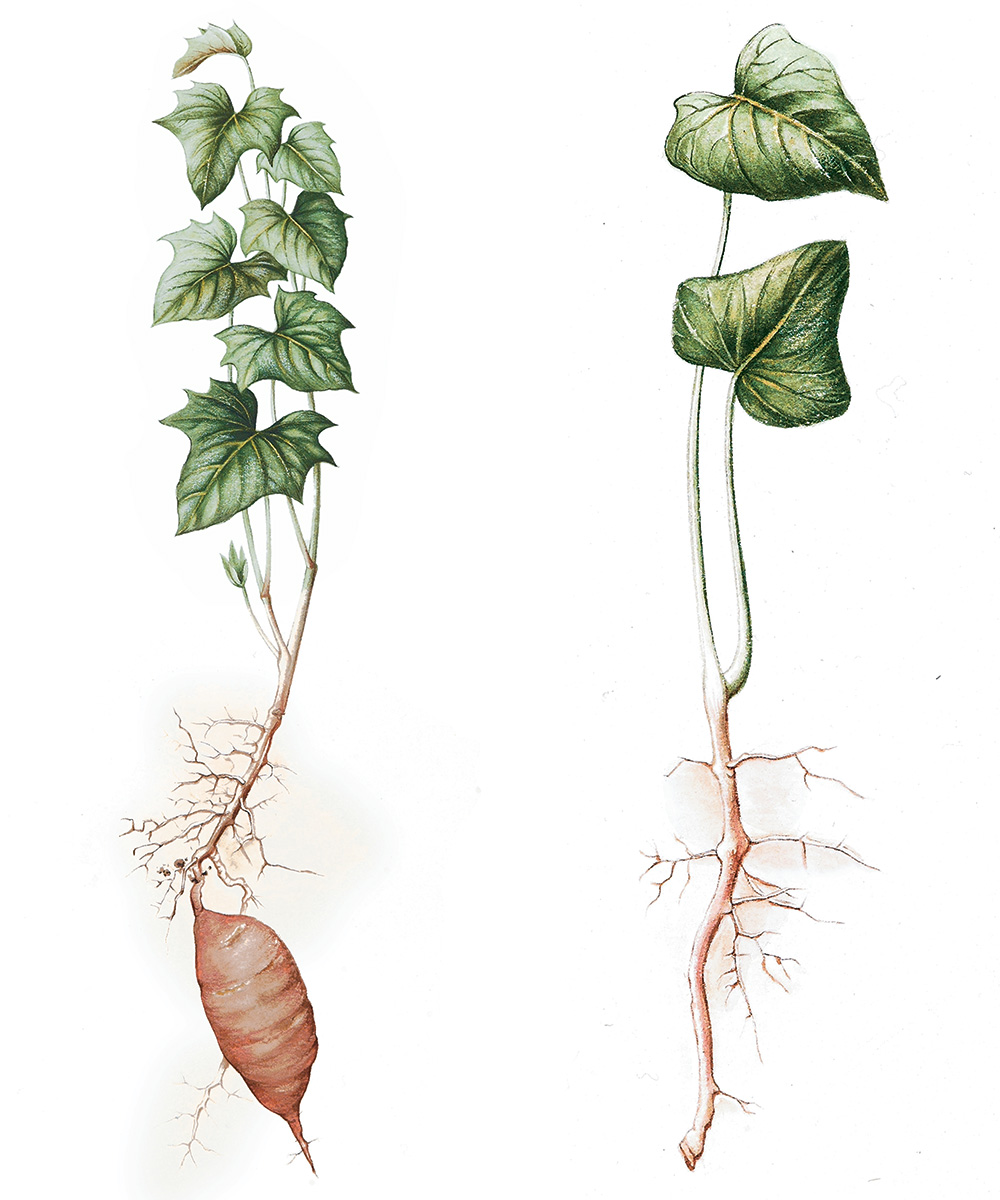 Each of the potatoes will sprout several tender, slim stems just like those you can order from commercial suppliers. After the slips have several leaves and are about 6 in. long, they can be pulled off at the surface of the potato and planted. The slips can be held for a couple of weeks by keeping the roots moist.

Some years I grow my own slips and sometimes I buy them, which I consider a safeguard against disease attacking my crop. Slips from professional suppliers are checked to make sure they’re free of disease. You might not be sure with your own.

This site is protected by reCAPTCHA and the Google Privacy Policy and Terms of Service apply.
See all newsletters
Previous: It’s Easy to Grow Sweet Potatoes Next: How to Hill Potatoes
X
View Comments