How to Grow Rosemary

This perennial herb is a must for every kitchen garden

Among the few herbs that are a must for every kitchen garden, rosemary, most would agree, is preeminent. There’s rosemary to grace nearly every garden and one for almost every purpose.

When considering shapes and sizes, you’ll find prostrate rosemaries in trailing and creeping forms. These can be used as ground covers or planted so they spill over a wall or cascade down a bank. Their strong roots make them excellent for erosion control. Prostrate forms are also beautiful hung from a basket or trained as a bonsai.

While prostrate forms grow outward, shrub rosemaries grow upward. Shrubs come in dwarf, medium, and tall sizes, with compact, open, or spiraling habits of growth. Dwarf rosemaries can make a decorative border and taller shrubs can create an informal screen or even a hedge. Or they can be espaliered against a sunny wall or fence. Many rosemaries make superb specimen plants.

No matter what the palette of flowers in your kitchen garden, there is rosemary that will complement it. The blossoms are commonly blue, but the blue can be as intense as gentians or as muted as forget-me-nots. Or it can be lavender blue. A touch of blue makes reds, yellows, and oranges sparkle—I learned that from bachelor buttons—so some form of blue-flowering rosemary is ideal for the mixed border. Pink-flowering and white-flowering rosemaries can highlight a pastel, silver, or white garden. For intriguing year-round color, variegated rosemary has green needles threaded with gold.

Rosemaries are tender perennial shrubs and can be early bloomers. In temperate climates, some bloom in December. In our California mountain garden, most have finished flowering before the roses start forming buds. Generally, rosemary blossoms from early spring through early summer, and sometimes again in early fall. Most varieties are generous with their flowers.

Rosemary’s roots lead to the sea

All culinary rosemaries derive from Rosmarinus officinalis, a medium-tall shrub native to Spain, Portugal, and the Mediterranean. Thanks to its heritage, rosemary is rugged. It can handle suffocating heat, stiff winds, salt air, and drought, and it actually prefers lean, rocky, alkaline soil. Rosemary’s gently curving or gnarled branches are stunningly combined with other sculptural, drought-tolerant plants like artichokes, cardoons, borage, sunflowers, thymes, sages, and nasturtiums. What’s more, rosemary isn’t bothered by deer and other devouring critters.

There are, naturally, elements that will polish off a plant. Too much watering and fertilizer result in woody branches that turn brittle and break. Bad drainage rots roots. Poor air circulation results in loss of leaves and perhaps even a fatal fungus. A hard freeze kills most plants, but the cultivar ‘Arp’ can survive down to 10°F or lower.

It’s fairly simple to avoid trouble with rosemary. Just bear in mind its Mediterranean origins. Set it in light, alkaline soil; keep it slightly moist until the plant is established (perhaps a full season); then keep it on the dry side, although the roots should never completely dry out. In the desert, deeply water rosemary several times a year. Should the leaves look dull, the plant needs water. If water doesn’t quickly drain from a test hole where you would like the plant to grow, dig in sand or even pea gravel and turn that spot into a mound or raised bed. Where growing conditions are ideal, rosemary does not need fertilizing. Where rosemary struggles, feed annually with liquid fish emulsion and kelp solution. Ample breathing space is essential.

Wherever you plant it, set rosemary where you will brush against it. The aroma will catch you by surprise, and, for an instant, you’ll be on a Mediterranean shore. Rosemary’s Latin name means “sea dew.” 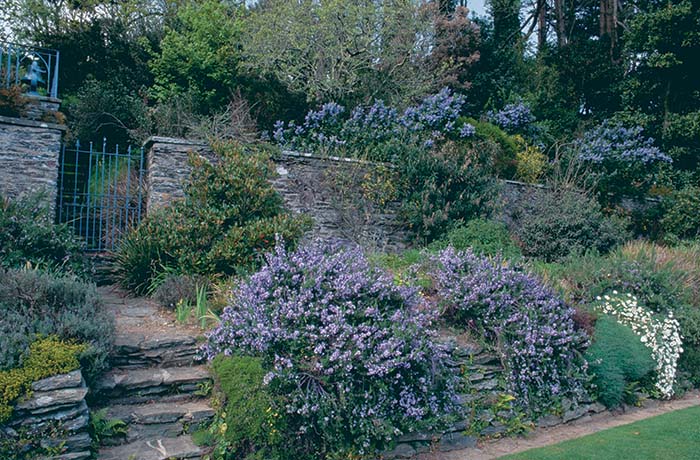 The hardiness zone sets the tone

In Zone 6 or colder (where winters reach 0°F or lower), grow rosemary in a pot the year around, bringing it indoors before autumn’s first killing frost. Some recommend growing it as an annual, but I think that’s a waste of a magnificent plant. In Zone 7 (10°F down to 0°F), grow the new plant in a pot the first season, overwinter it indoors, then plant it out in a sheltered spot in spring after hardening it off (important). In Zones 8 and above (10°F or warmer), you can keep rosemary in the ground.

Where there is wet snow, you must support long branches. Last winter we had more than 3 ft. of very wet snow, a first for us. Having had no experience with it, I realized one day that our 5-ft.-tall ‘Tuscan Blue’ rosemary had disappeared. When the snow melted, I found many of the plant’s branches broken. Our old ‘Arp’ is enormous and bushy and on a slope, but it, too, had lost branches, as had new prostrate rosemaries. I should have tied branches of the tall shrubs to stakes for support. The only way to protect the prostrate plants would have been to place something over them—a bench, for instance.

Only one circumstance makes it impossible to grow these glorious plants: not enough sun. The half-day sun will produce a spindly plant, but no sun results in no rosemary at all.

Happy rosemaries are robust rosemaries that are rarely afflicted with pests. But if leaves become stippled with yellow or white specks, they probably have spider mites. If lots of leaves turn yellow and drop off, it may be whiteflies. Aphids attack dwindling plants. Spraying frequently with strong streams of water to knock off those nasties is the first step. If the problem persists, spray with insecticidal soap, following directions. Naturally, you will not harvest leaves from such plants until they have regained their health and are free of spray.

Rosemary is evergreen, so it can be harvested year-round. Pick 3 in. to 6 in. from one branch rather than shorter lengths from many tips. Pinching helps keep the plant bushy. I can’t bear to prune our rosemaries, but some people cut thin branches back as much as one-half after flowering. 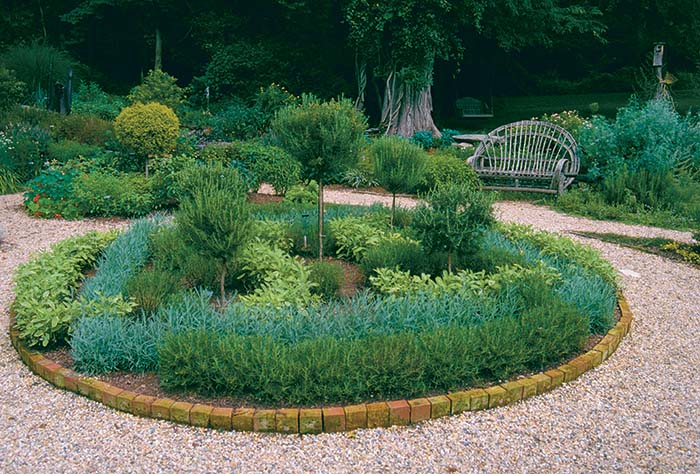 How to propagate rosemary

Though possible, it is slow going to propagate rosemary from seeds. Rosemary is best started with a plant from a nursery specializing in herbs, or from a stem cutting of a plant you admire. When trying to choose a variety from a catalog, you may find that names and descriptions do not conform from one source to the next. No matter what the name, select the plant whose description comes closest to what you want.

In temperate climates and when indoors, new growth starts in March. At that time, cut 3 in. to 6 in. off the tips of branches; I always start three or four cuttings for each one I’ll finally plant. Pull off the lower leaves and dip the bottom of the stem in rooting powder. Set three or four cuttings in a 4-in. pot filled with a moist mixture of equal parts perlite and peat moss. Cover with a plastic bag that has been punctured in two places and secured with a rubber band. Set the pot in a bright spot out of direct sunlight. If the soil mix appears dry, moisten it with a soft spray. In about three weeks, roots should have formed. You can gently lift up a cutting to check. Put each rooted cutting in a 3-in. or 4-in. pot.

To grow rosemary in pots, select potting soil with a minimum of peat moss, which is acid, as rosemary likes an alkaline pH. Add enough sand for superb drainage. The surface should dry out between waterings, but the soil should never be completely dry.

The only disadvantage of having to bring rosemary indoors is that flowers will be sacrificed if branches must be cut back, as they are formed on the previous year’s growth. Indoors, rosemary needs ample light, not too much heat, good air circulation, and fairly high humidity. Spritz the plant two or three times a week.

Rosemaries don’t like being transplanted and don’t mind crowded roots, but they don’t like to be overcrowded either. Each spring before new growth starts, slide the plant out of its pot and snip back the roots by one-fourth. Replace a quarter of the potting mix with fresh soil. Your rosemary plant will be ready for a new season.

Previous: How to Grow Chives Next: Rosemary Is a Robust Herb With Plenty of Flavor
X
View Comments