About 10 years ago, near the end of June, a violent storm ripped through my garden. The rain was so heavy it blew in opaque sheets, driven horizontally by the wind. I watched as the garden was pounded, and wondered if the tomato plants and the trellises I had recently built would survive. But when the wind and rain let up, my trellises were still standing, and my tomatoes, only a couple of feet high at the time, were battered but not broken. I doctored the plants that needed first aid, and I’ve been growing tomatoes on these trellises ever since.

I used to support my tomatoes with stakes, which have their merits, but you have to tie the tomatoes. When you have a lot of plants, juggling scissors and a ball of twine while tying knots can be time-consuming and exasperating. I experimented with tomato cages briefly, but I found it difficult to prune inside the cages.

Then I heard about growing tomatoes on a vertical string—a common practice in greenhouses. It made sense. Flipping a vine around a string already in place is faster than tying a plant to a stake. The strings also make it easier to keep track of the suckers needing pruning. All I had to do was make a framework for the strings.

I had cabinetmaker’s skills, and I had my own ideas, so I designed a tomato trellis. I wanted a stable, freestanding structure that could be taken apart at the end of the growing season and stored in a minimum amount of space.

There are several advantages to growing tomatoes vertically

The A-frame trellises I designed to have a number of advantages, especially given the conditions I grapple with. I live at the bottom of a valley next to a river in northwestern Connecticut. The cool air settles in the valley on still nights, bringing high humidity with it. And I have only 105 frost-free days to grow tomatoes. On a clear night in the summer, the temperature can drop to the mid-40’s, pretty chilly for a tomato plant.

With a trellis, it’s easy to drape the tomatoes to keep a light frost from putting an early end to the harvest. And with the vines all lined up neatly, it’s easier to apply organic fungicide during wet weather when blight is a problem. The trellis allows good air circulation around the foliage, helping it dry out.

The trellis also maximizes the use of space, a concern for gardeners who have no room to spare. And because the growth of the plant is directed skyward, the fruit and leaves get the maximum amount of sunlight. In addition, the trellis makes it easier to spot pesky critters and damage from viruses and diseases.

This method is best for tomatoes that grow tall

Indeterminate tomatoes are vigorous and will keep growing until they are frozen. They have more foliage, and this may result in tastier fruit. Once the first fruits ripen, the plants continue producing until frost. Some of my favorite indeterminate cultivars are ‘Early Cascade’, ‘Sweet Million’, and ‘Supersonic’.

Give your tomato plants spacious accommodations

After I set up the trellises, I put in five tomato plants per 10-ft. trellis. This may seem like more than enough room when the plants are small, but by the end of August, the plants will have reached the top of the trellises, and with any luck, be big and bushy. Then there will be just enough room to get between the rows.

I dig a hole for each plant, fill it with water, and put the plant at or slightly below ground level. Because the plants are not tall enough to start wrapping around the trellis strings, I tie them to the bottom bar with a loose loop of string to keep them from flopping over. Once they have reached the trellis’s vertical strings, I gently wind the plants’ main stem around the string.

After the tomatoes have grown a while, I begin pruning. Tomato plants start out with a single stem, then send out leafy, flowering branches. Suckers form above the intersection of the leaf stem with the main stem of the vine. Suckers are just new vines starting out.

Left to themselves, tomatoes form multiple vines. Pruning suckers control the number of vines a plant has and therefore the amount of fruit it sets. I leave three vines on each plant. Pruning tomatoes results in fruit ripening earlier, although there’s a smaller yield per plant. Even with pruning, I usually don’t get ripe fruit until the beginning of August. Since I can harvest for only a couple of months, I put in a lot of plants to increase my yield.

When I start pruning suckers, I leave two to grow into vines, along with the main stem. I train and prune at least once a week. Sometimes, if a sucker is large enough, I leave the first leaf when I pinch off the stem so the plant will have more foliage. Sometimes an unnoticed sucker grows so big it has set fruit by the time I find it. When this happens, I just add a string to the trellis and let that sucker grow.

I prune off the flower clusters above the fourth tier so the tomatoes below grow bigger. Some folks insist picking off the flowers has the opposite effect, and the plants react with a vigorous growth spurt that delays the ripening of fruit already set. However, for years I’ve been picking off most of the upper flowers on my plum tomatoes to limit the amount of fruit set and ensure good fruit size, and I’m happy with the results.

Tips for bringing in the tomato harvest

By the end of my growing season, the bottom three tiers of tomatoes will have set fruit and ripened, and most of the tomatoes above will be green when the frost comes. During a long growing season, a few tomatoes on the fourth tier will ripen, and others will be big enough to pick and bring inside to ripen later.

I always dispose of the tomato foliage in the fall before dismantling and packing up my trellises. It’s an important step to ensure the health of next year’s plants.

I designed this A-frame trellis to be a freestanding, stable structure that could be taken apart and stored over the winter. If treated with a wood preservative and stored in a dry place, the trellis will last 5 to 10 years. I grow five tomato plants on each 10-ft. long trellis. With any luck, and good weather, the plants will reach the top bar by August. 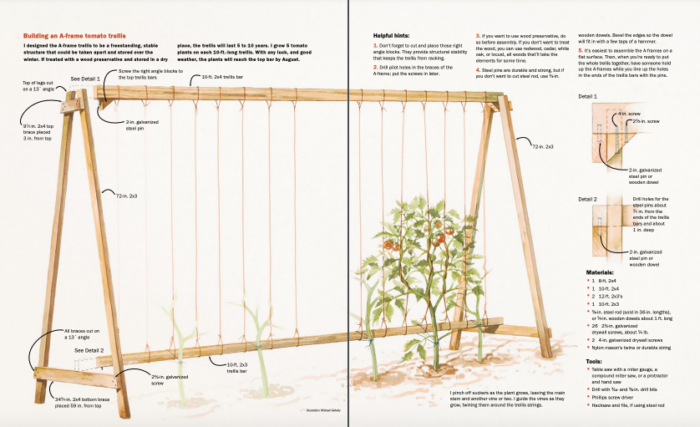 1. Don’t forget to cut and place those right-angle blocks. They provide structural stability that keeps the trellis from racking.

2. Drill pilot holes in the braces of the A-frame; put the screws in later.

If you want to use wood preservative, do so before assembly. If you don’t want to treat the wood, you can use redwood, cedar, white oak, or locust, all of which are woods that’ll take the elements for some time.

4. Steel pins are durable and strong, but if you don’t want to cut steel rod, use 1/4-in. wooden dowels. Bevel the edges so the dowel will fit in with a few taps of a hammer.

5. It’s easiest to assemble the A-frames on a flat surface. Then, when you’re ready to put the whole trellis together, have someone hold up the A-frames while you line up the holes in the ends of the trellis bars with the pins.

• Tablesaw with a miter gauge, a compound miter saw, or a protractor and handsaw
• Drill with 3/16-in. and 3/8-in. drill bits
• Phillips screwdriver
• Hacksaw and file, if using steel rod

This site is protected by reCAPTCHA and the Google Privacy Policy and Terms of Service apply.
See all newsletters
Previous: Learn to Build a Fence, Arbor, or Bridge to Support Your Tomatoes Next: Build an A-Frame Tomato Trellis
X
View Comments