Trial, Error, and LOTS of Lilies!

We live in a historic home originally built for the employees of Longwood Gardens. When we first came here, the plot had some large red elms (Ulmus rubra, Zones 3–9) on the street, an enormous Norway maple (Acer platanoides, Zones 4–9) overshadowing the house, a few struggling bushes, and a sandbox. With a lot of trial and error, we’ve built a garden full of lilies, daffodils, irises, roses, and flowering trees that has interest every season of the year. 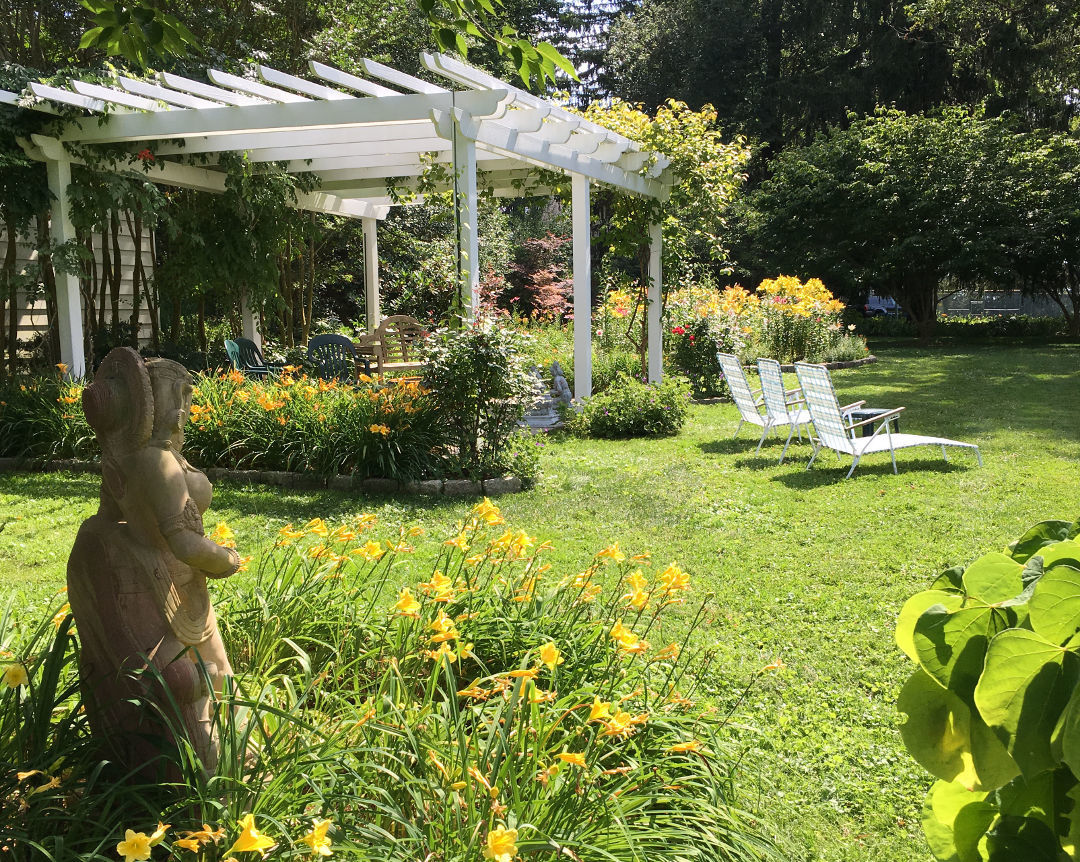 The pergola is flanked by rows of ‘Stella D’oro’ daylilies (Hemerocalis ‘Stella D’oro’, Zones 4–11) and is completely covered with trumpet vine (Campsis radicans ‘Flava’, Zones 4–9) and Kiwi vines (Actinidia deliciosa ‘Pasha’, Zones 6–9). The lily garden seen behind the pergola has about 30 varieties of lilies, although ‘Elusive’, ‘Musassi’, and ‘Corsini’ are outstanding, and ‘Yelloween’ has proven to be the most prolific. A statue of an apsara (a celestial maiden) copied from a South Indian temple looks on, surrounded by ‘Happy Returns’ daylilies (Hemerocalis ‘Happy Returns’). 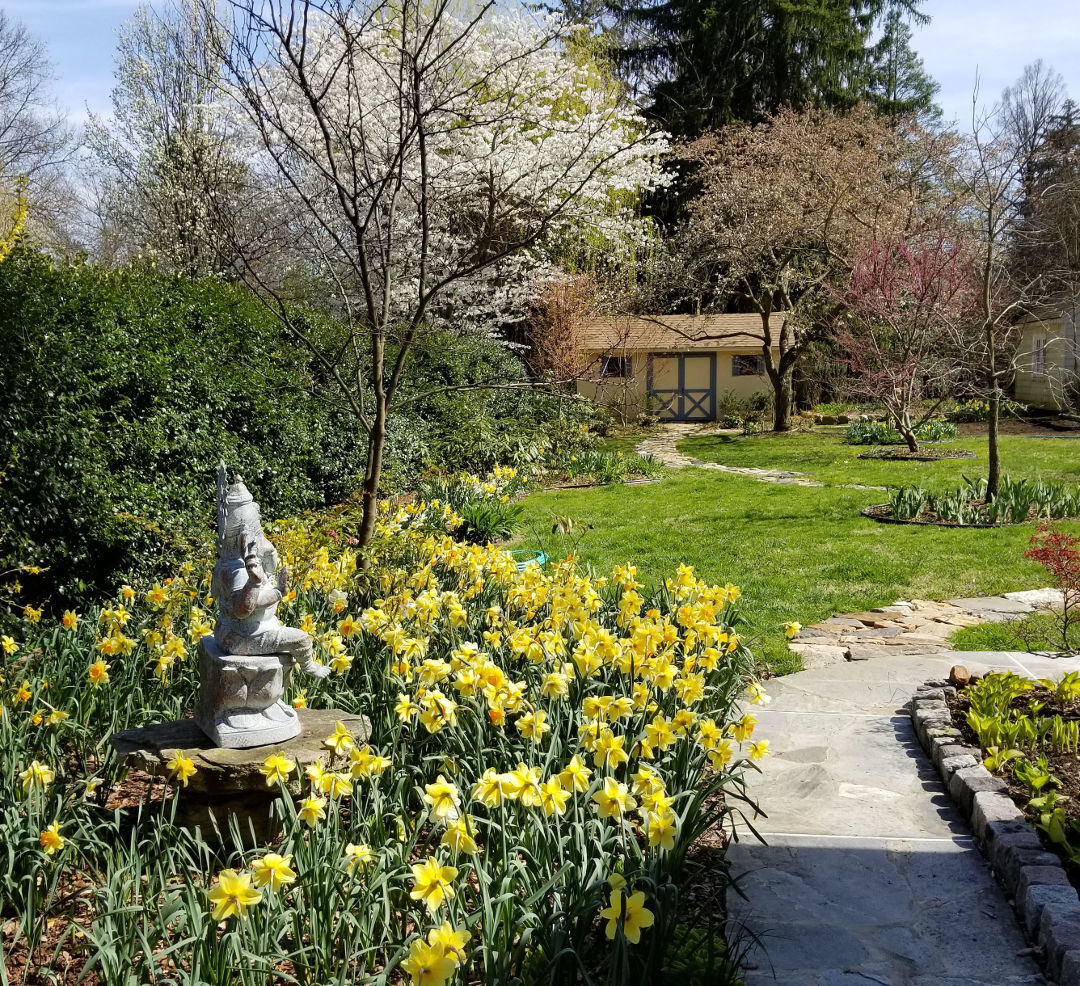 In the back of the house, a weathered bronze statue of the Indian god Ganesh is surrounded by a field of daffodils (Narcissus ‘Chromacolor’ and ‘Flower Record’) in the spring. The flowering cherries (Prunus serrulata ‘Mt. Fuji’, Prunus ‘Okame’, Zones 5–8) are just beginning to bloom, following the neighbors’ Yoshino cherry (Prunus × yedoensis, Zones 5–8). The stone walkway was built from flat stones gathered from fields and old quarries for miles around, or brought back from visits to the family summer home in New Hampshire. 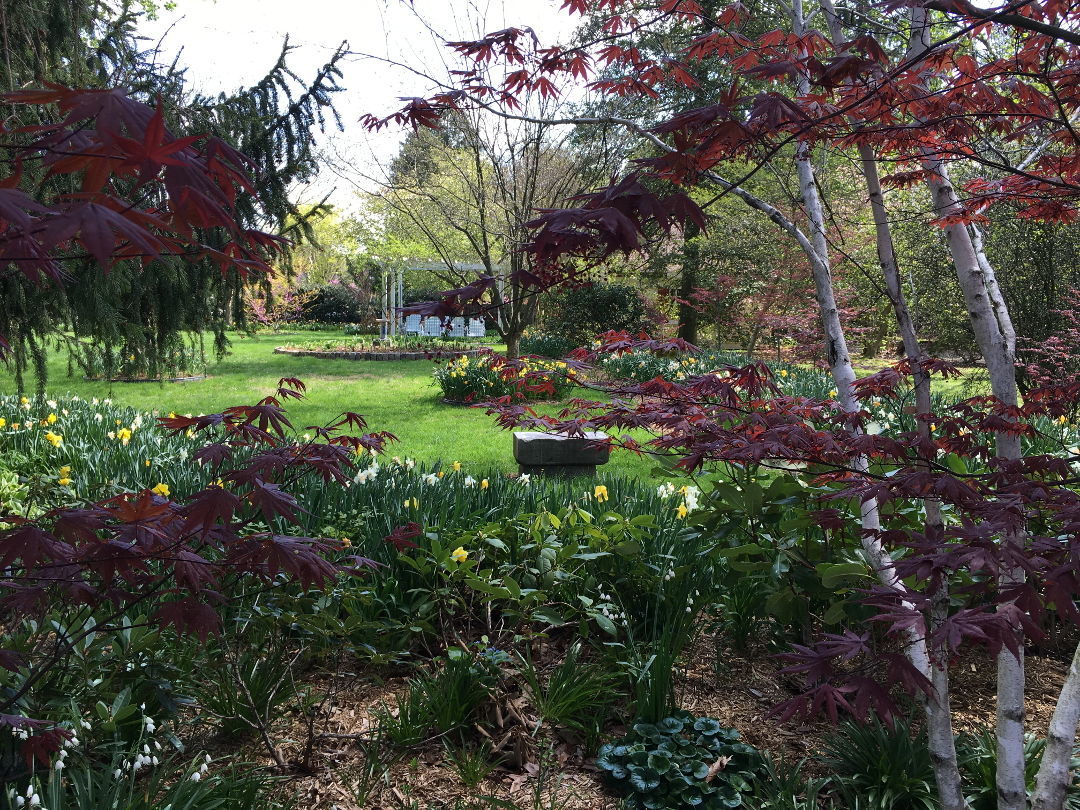 The yard in the early spring is shown through the beautiful red leaves of ‘Bloodgood’ Japanese maples (Acer palmatum ‘Bloodgood’, Zones 5–8) highlighted against the pure white bark of ‘Jacquemontii’ birches (Betula utilis ‘Jacquemontii’, Zones 5–6). The bench is made from two pieces of marble from an old pump house we took down soon after we came. The shade garden visible in the foreground is covered with summer snowflakes (Leucojum aestivum, Zones 4–8) in the early spring and filled with a variety of hostas later in the summer. 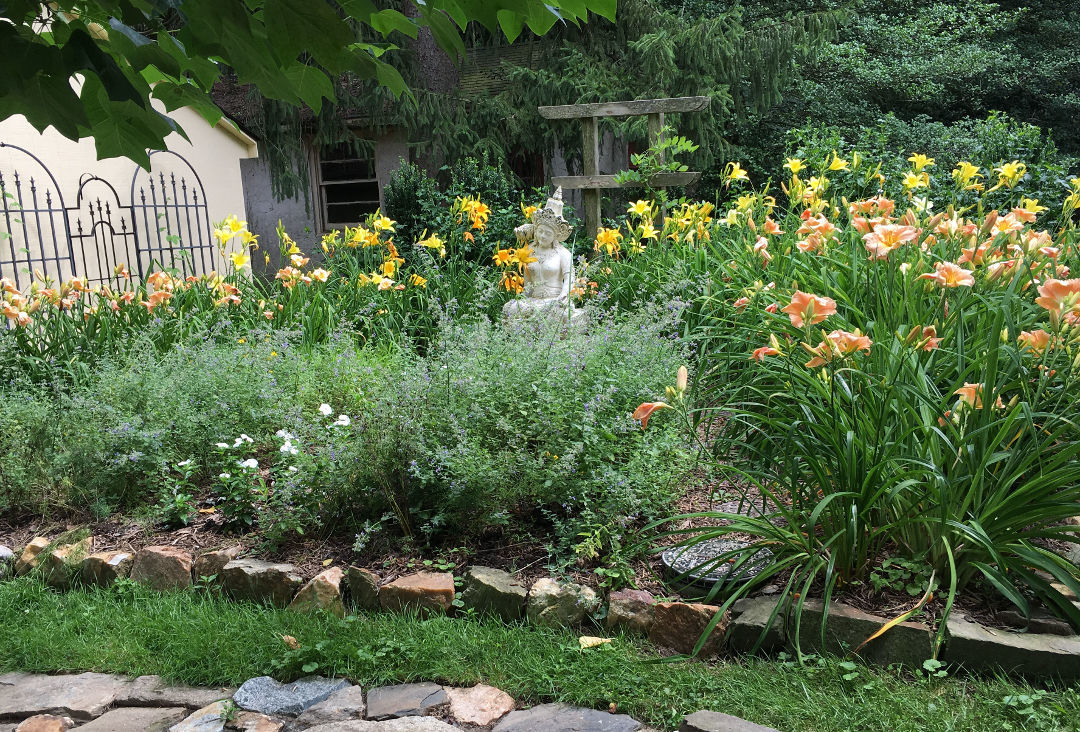 A quiet corner tucked between two buildings houses a Balinese statue of Tara, the Buddhist goddess of compassion, surrounded by a profusion of ‘Hyperion’ and ‘Fairy Tale Pink’ daylilies (Hemerocalis). Nepeta (Nepeta racemosa ‘Walker’s Low’, Zones 4–9) and vinca also flourish here. The trellis behind the statue holds a wisteria vine (Wisteria frutescans ‘Blue Moon’, Zones 5–9) that fills the garden with color earlier in the spring, and the trellises on the left are later covered with morning glories (Ipomoea purpurea, annual). 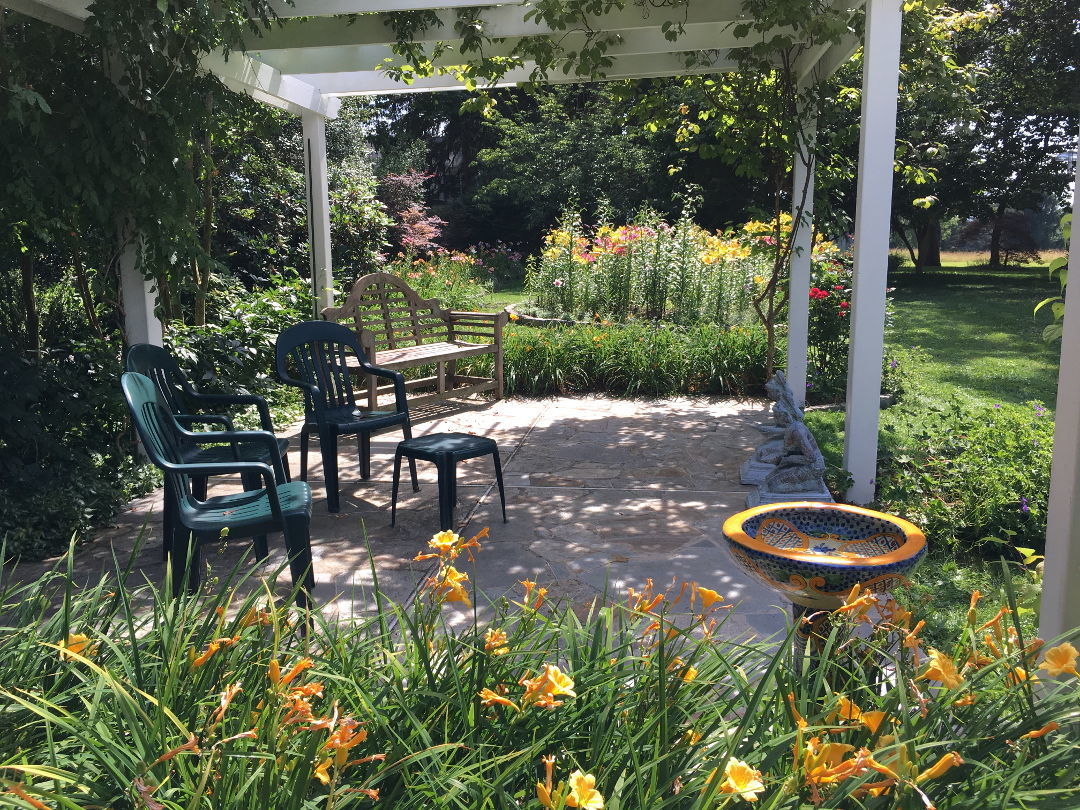 The view from the pergola highlights the lilies. The circular garden is almost all orienpets (as most orientals and trumpets couldn’t take the heat), while the more shaded garden on the left is almost all Asiatics, with a row of unnamed burgundy Japanese maples, all of which were raised from seedlings discovered in the gardens. Red ‘Knock Out’ roses and hardy geraniums (Geranium ‘Gerwat’ Rozanne, Zones 5–8) provide a splash of color in the front of the pergola. 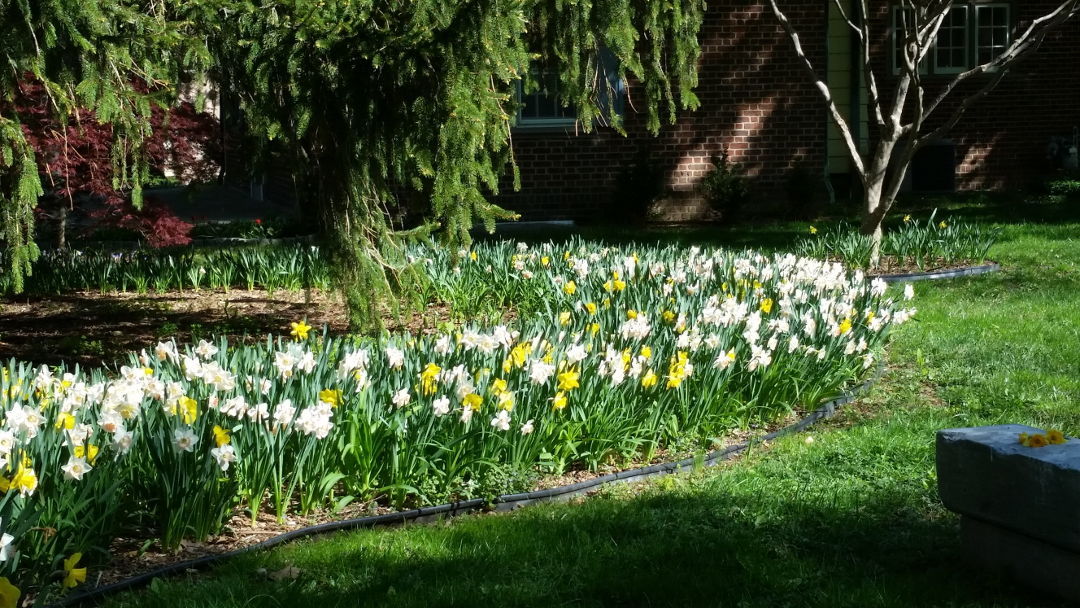 In the spring, daffodils (Narcissus, unnamed, as they were purchased in bulk near the beginning of our gardening careers) sweep around a large Norway spruce (Picea abies, Zones 2–7) and along the side of the yard. These are later replaced by daylilies (Hemerocalis) in the long border garden. 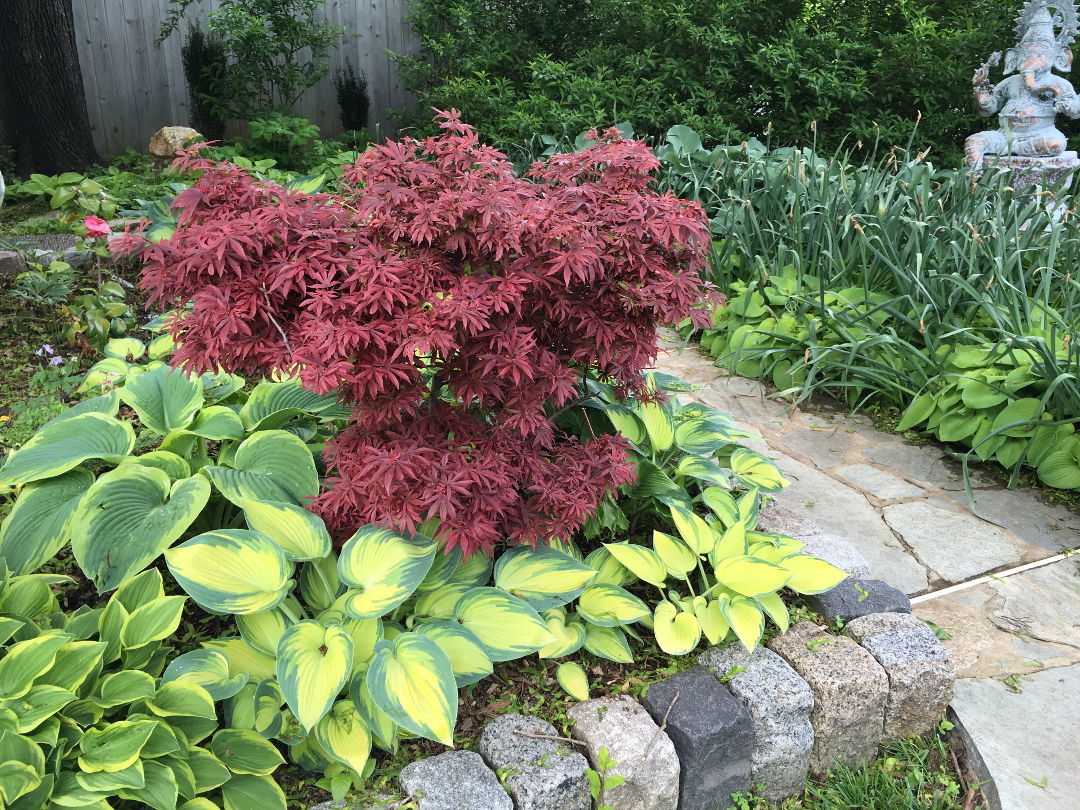 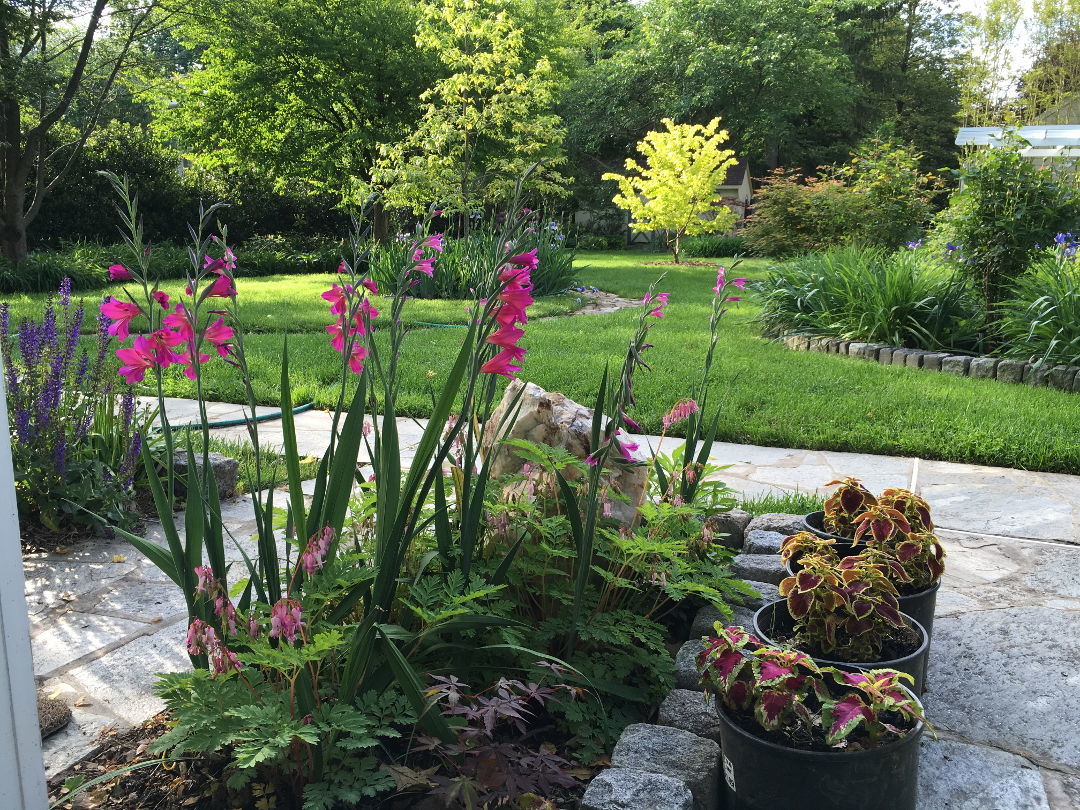 A cluster of bright Byzantine gladiolus (Gladiolus communis ‘Byzantinus’ Zones 6–10) stands in front of a building at the side of the yard. Dicentra (Lamprocapnos spectabilis, Zones 3–9) bloom beneath them, and coleus on the right await planting. The latest string of unnamed burgundy Japanese maples has reached about 5 inches in height. The bright colors of ‘The Rising Sun’ redbud (Cercus canadensis ‘The Rising Sun’, Zones 7–10) shine in the background. 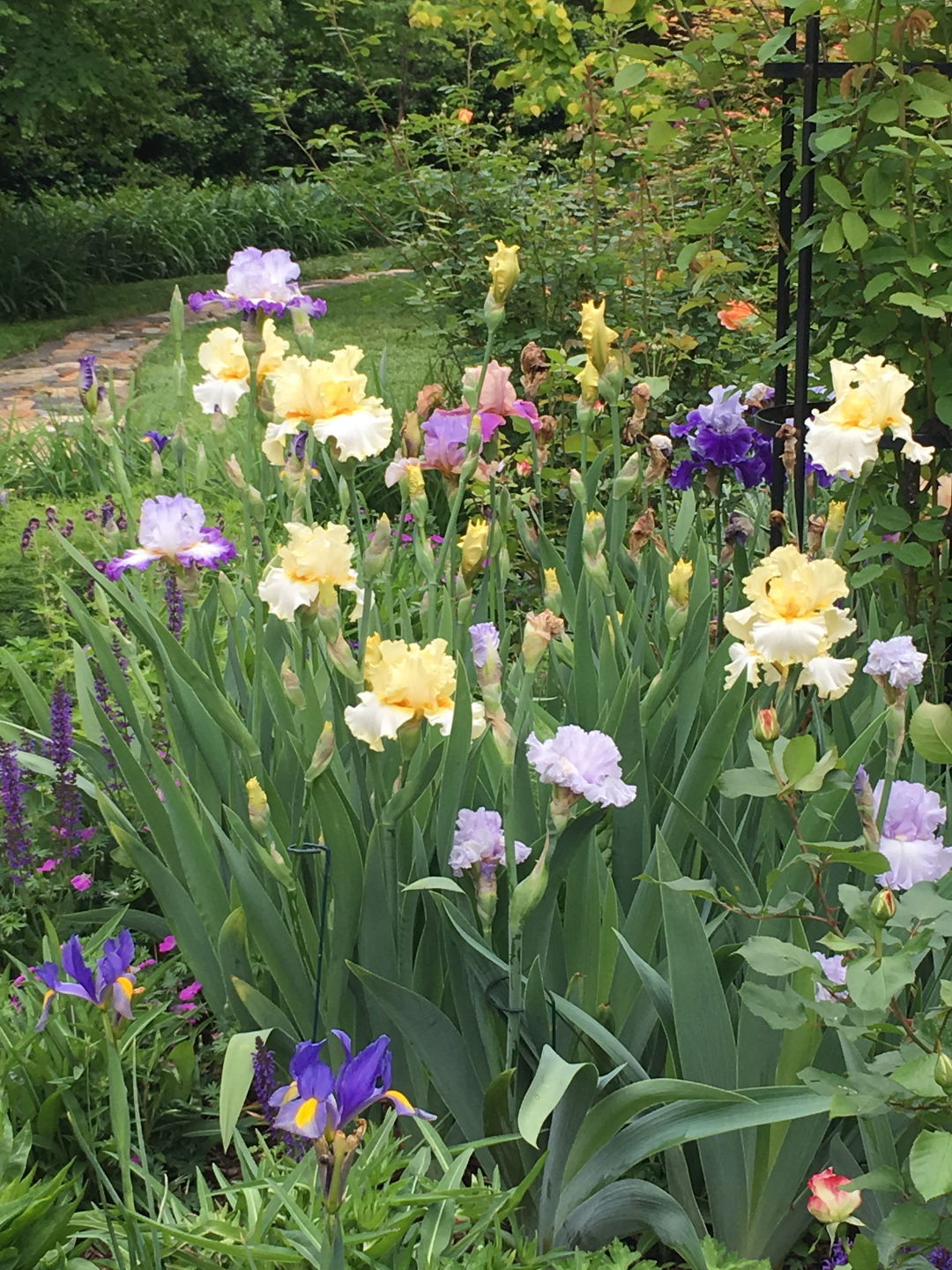 Irises fill the interior of the rose garden (Iris hollandica ‘Mystic Beauty’, Iris germanica ‘Better Than Butter’, Iris germanica ‘Silverado’). Dutch irises have naturalized around the outside, and the taller bearded irises, most of whose names have been forgotten, fill the inside closest to the rose pillar. 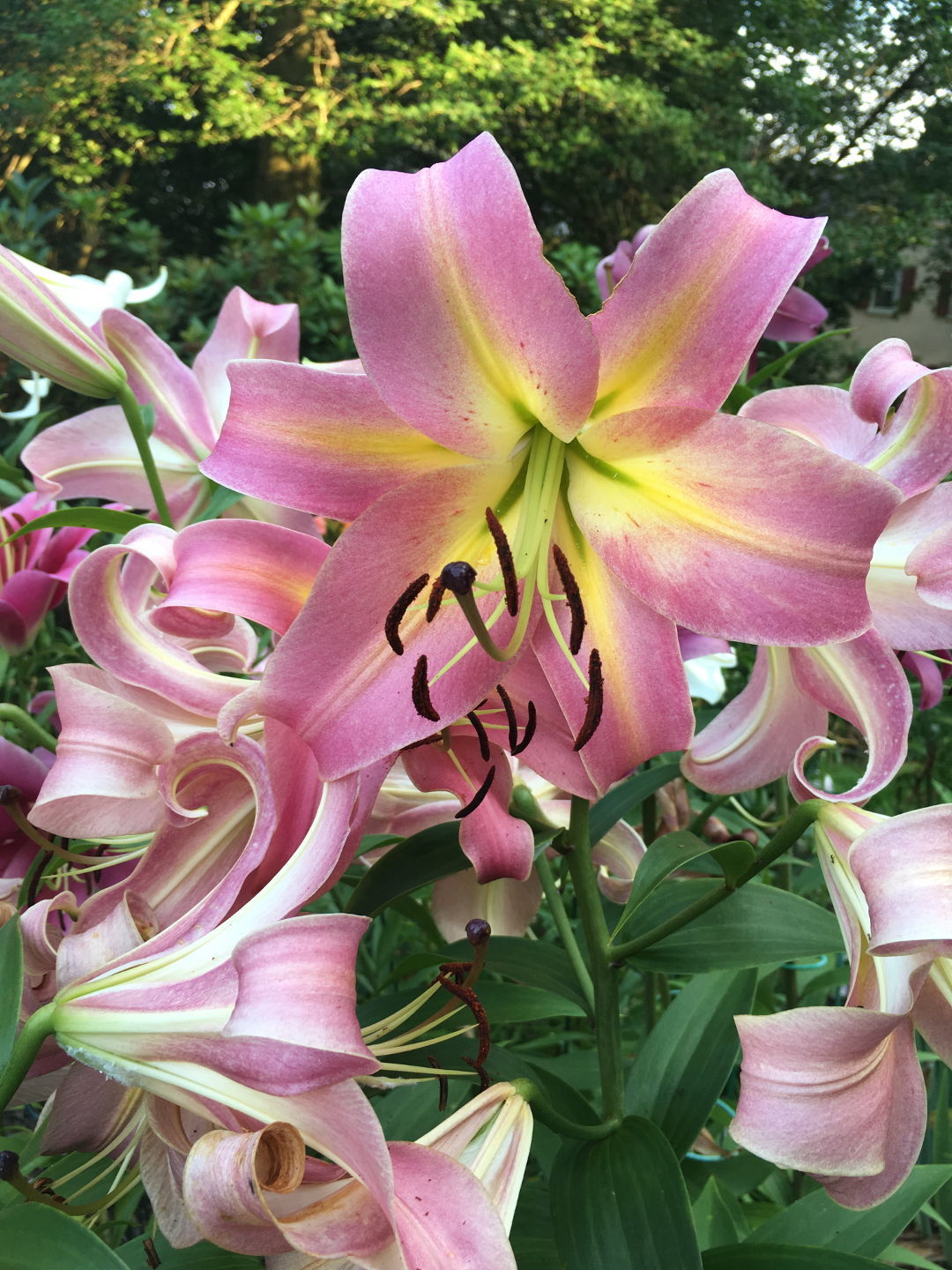 The Corsini lily (Lilium ‘Corsini’) is one of the most outstanding in the lily garden. The lily garden was greatly improved when we dug out the original soil down to about 18 inches and replaced it with compost and potting soil. The area is in full sun in the afternoon, and we’ve found that the orienpets flourish here far better than other lilies. 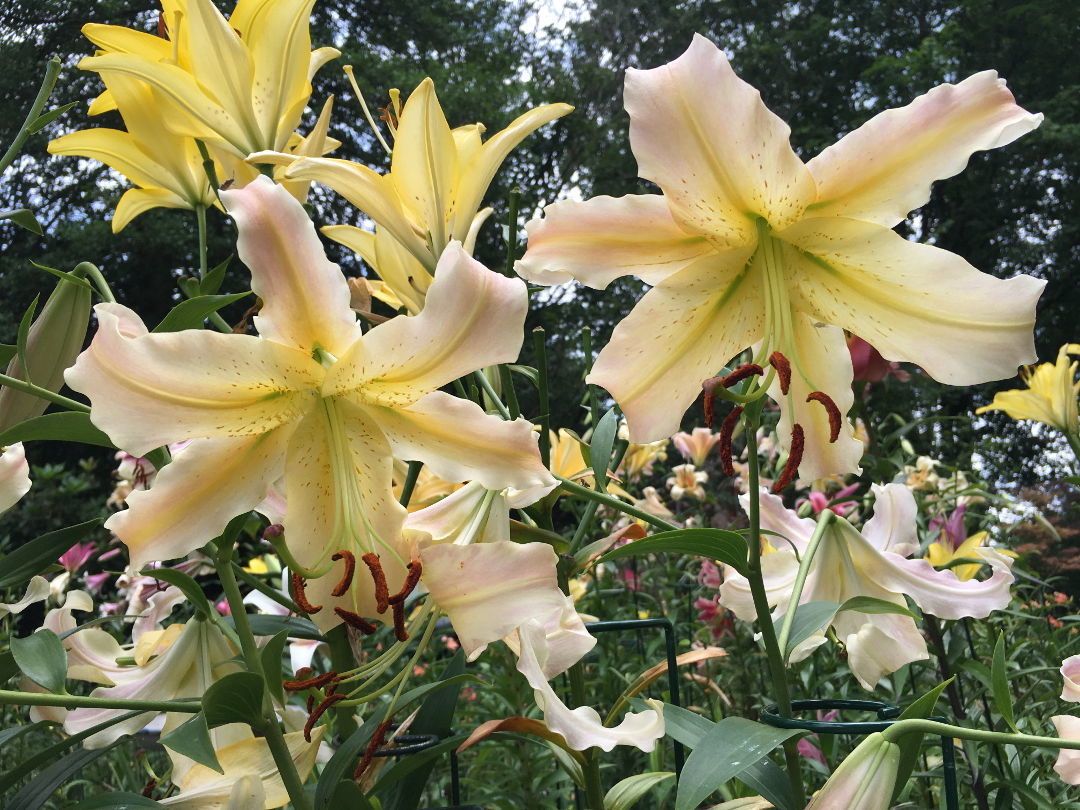 The ‘Elusive’ lily (Lilium ‘Elusive’ OT hybrid) is another that flourishes in the lily garden. ‘Yelloween’ (Lilium ‘Yelloween’, OT hybrid), rising up in back of the ‘Elusive’, has proven to be the most prolific of all lilies in this area, and its numerous offspring have been transplanted to other areas of the garden.