Attractive, easy to grow, and pollinator friendly, these perennials are worthy of a spot in your garden

Some years ago, during a midsummer trip to Wisconsin, I found myself transfixed by a vast planting of ‘Summer Beauty’ allium dotted throughout with taller bright pink coneflowers (Echinacea spp. and cvs., Zones 3–9). To my eyes, this perfect pairing of complementary colors but contrasting floral forms was simply brilliant, and the hum and dance of bees and butterflies brought it all to life. I think this was the moment when I truly came to appreciate alliums.

Alliums, or ornamental onions, make up a diverse group of garden plants that includes spring-blooming bulbs, culinary herbs, and durable perennials with persistent foliage and bountiful summer flowers. Bulbous alliums—the ones with flowers as big as a kid’s head, or routinely photographed with one for size comparison—are marvels of the spring garden. Not all are big-bloomed or as tall as a toddler, but some—like the eye-popping purple balls of towering ‘Globemaster’ (A. ‘Globemaster’) or the 12-inch spidery pink globes of Schubert’s allium (A. schubertii) set a high bar. While these impressive flowers create garden drama, the dormancy that follows is less thrilling; the often outsized leaves can take what feels like months to die away, flopping over neighboring plants in the meantime and leaving gaping holes behind.

How to propagate: Simple division in spring or fall

On the other hand, rhizomatous alliums—still bulbous but modified—act more like perennials, producing dense clumps of persistent grassy-to-strap-like leaves that largely remain attractive to the last days of summer. Their individual flower heads—technically umbels—may be smaller but are more bountiful per plant than spring bloomers and extend the summer floral show into fall. And though gardeners love alliums in all their guises, bees and other pollinators are super fans! In fact, it is hard for me to think of alliums without the accompanying frenetic soundtrack of buzzing bees.

Our perennial allium trial at the Chicago Botanic Garden evolved organically from a simple comparison of ‘Summer Beauty’ to Summer Peek-a-Boo®, its compact doppelganger. I added ‘Millenium’ at the suggestion of a friend. While we were watching and ranking these initial alliums, others like them crept into the market and into our trials. I have a feeling this is just the beginning, but the following
summer alliums have put on the most impressive show so far.

My initial reaction to chives in the trial was “No way,” but then ‘Chivette’ showed up and “Why not?” seemed a better response. Chives fit handily into the popular food­scaping movement, and ‘Chivette’ is ornamental whether you eat it or not. Lavender-purple flowers, produced freely for about a month in late spring, become ragged looking near their end. ‘Chivette’ is mostly sterile, so there is no need to deadhead ­unless the browning flower heads disturb you. My suggestion is to take a deep breath, because a flush of bright green leaves—curlier than the earlier leaves—about two weeks after flowering does a good job of covering any ugliness. A midseason growth spurt widens ‘Chivette’ but does not add to its height. Yellow leaf tips were common but not bothersome; the ugly stage after flowering is mercifully short. 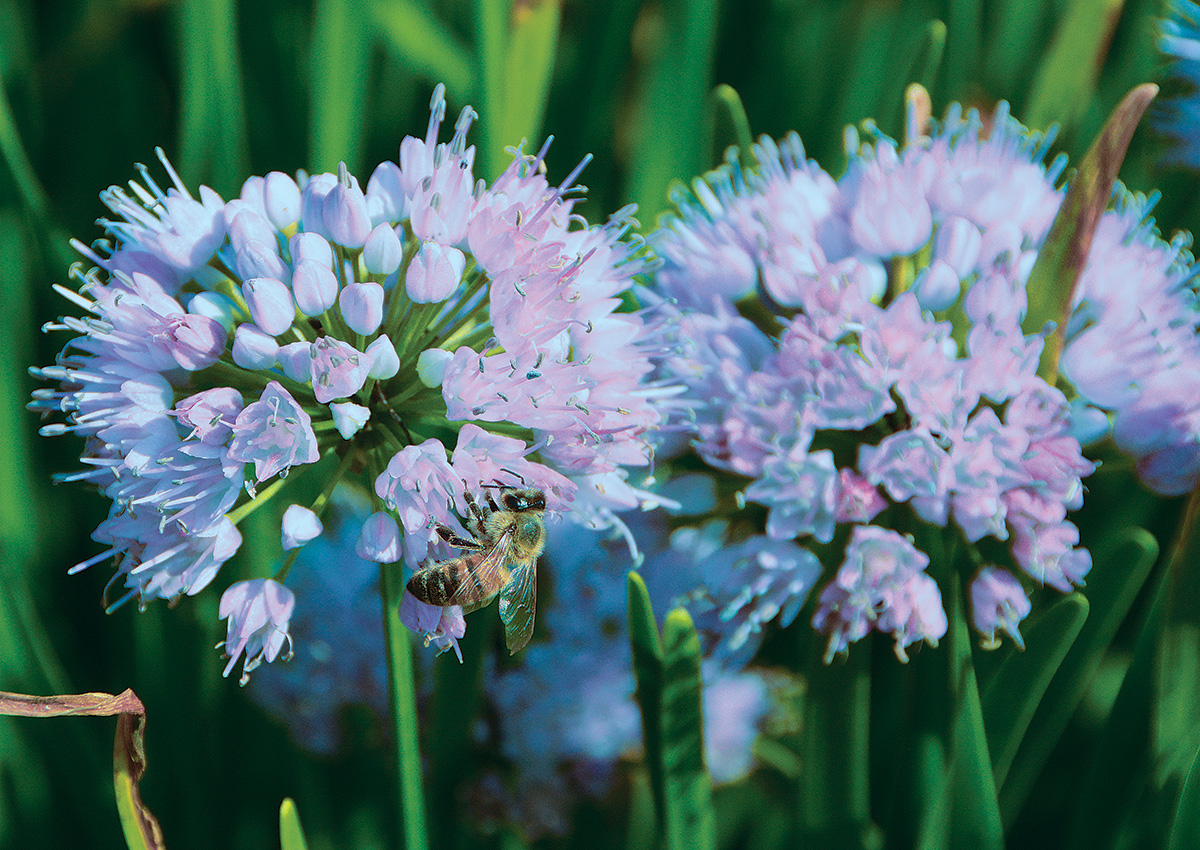 Summer Peek-a-Boo® (Allium ‘MGsmmpkb13’) is a sport of ‘Summer Beauty’ that has a tidy compact habit with flowers perched on the foliage rather than rising above like its predecessor. The light purple flowers, in 2-inch spheres, smother the dark green strappy leaves for about a month in midsummer; minor leaf desiccation was noted periodically, but flowers masked the damaged tips. In our garden, the neat clumps were 18 inches tall and twice as wide. (I said it is compact, not dwarf!) To me, the two cultivars complement each other more than compete, although side by side, ‘Summer Beauty’ looks wilder. Summer Peek-a-Boo® is a versatile ­mixer; blousy calamint (Calamintha nepeta subsp. nepeta, Zones 5–9) softens its stout habit, while the vertical spikiness of Russian sage (Salvia yangii and cvs., Zones 4–9) is a wonderful contrast to its uniformity. 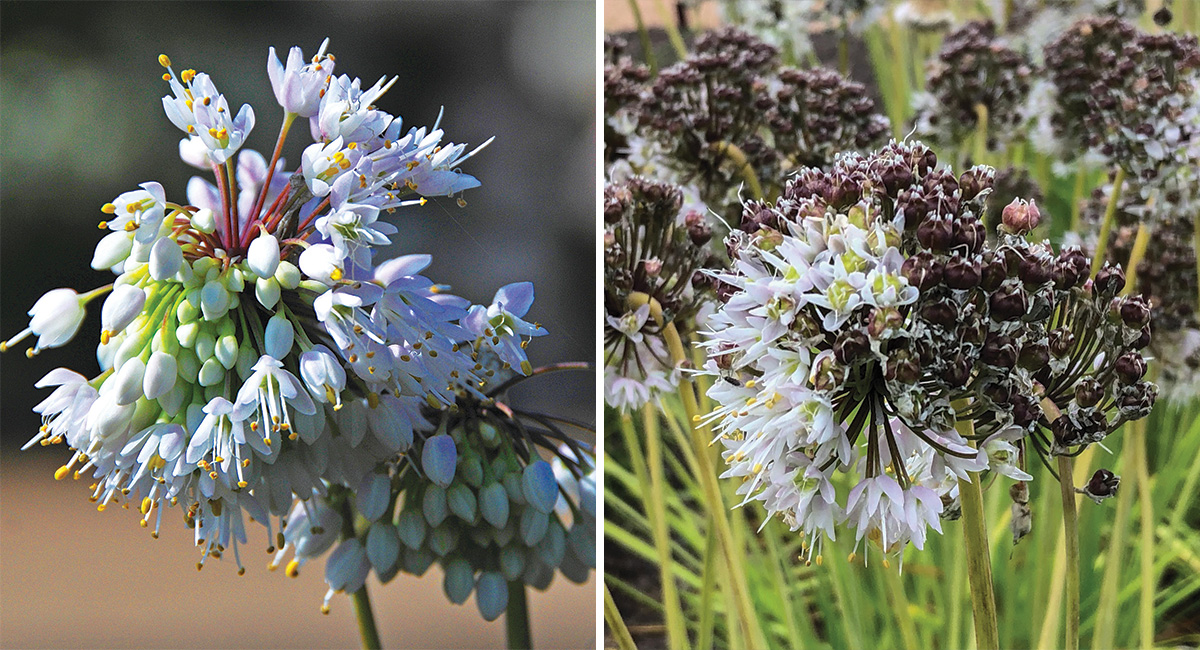 White-flowered ‘Falling Stars’ (Alium cernuum ‘Falling Stars’) was a bit of a sleeper to me until it fruited. There is no doubt it is a pretty form of the typically pink-flowered nodding onion (A. cernuum)—a reference to the sharp crook that points the 2-inch flower clusters downward in a shower of stars in late summer. The purple-brown fruits are surprisingly attractive at their peak, but it is the yin and yang of the pure white flowers juxtaposed to the ripening dark fruits that captivates me. The gray-green leaves, thicker than those of the species, pale to light green with some tip damage as the season goes along. On my ornamental scale of 1 to 10, the grassy foliage lands in the middle. There is nothing wrong with it; I just find it less interesting than the deep greens of some other alliums.

Protruding white anthers add sparkle to the dark rose-purple umbels of ‘Windy City’, a standout feature of this 2015 introduction. The 2-inch starburst-like, mostly sterile flower heads open in early summer and put on a spectacular show for about six weeks. The glossy dark green foliage is particularly lush in the early season; leaf tips may yellow or brown in summer, although it was not too troubling. ‘Windy City’ has a uniform robust habit to 21 inches tall in bloom—while the leaves form a clump that is 10 inches tall and 30 inches wide. In my mind, I always pair ‘Windy City’ with the softer habit of a grass such as ‘Carousel’ little bluestem (Schizachyrium scoparium ‘Carousel’, Zones 3–9) and then imagine how its rosy flowers and purplish fruits blend with the red-purple, pink, and copper tones in the grass stems.

‘Summer Beauty’ (Allium tanguticum ‘Summer Beauty’) was developed in the Chicago area but quickly found fans farther afield. Lilac-pink flowers, in 2-inch globes, are plentiful in midsummer, drawing in pollinators of all stripes for about a month. The glossy, deep green leaves remain freshly verdant from spring to fall, forming bushy mounds with wiry flower scapes that rise 8 to 12 inches above the foliage. Leave the sterile fruits intact for seasonal interest; the winter skeletons are delightful etched in frost or dusted in a snowy mantle. 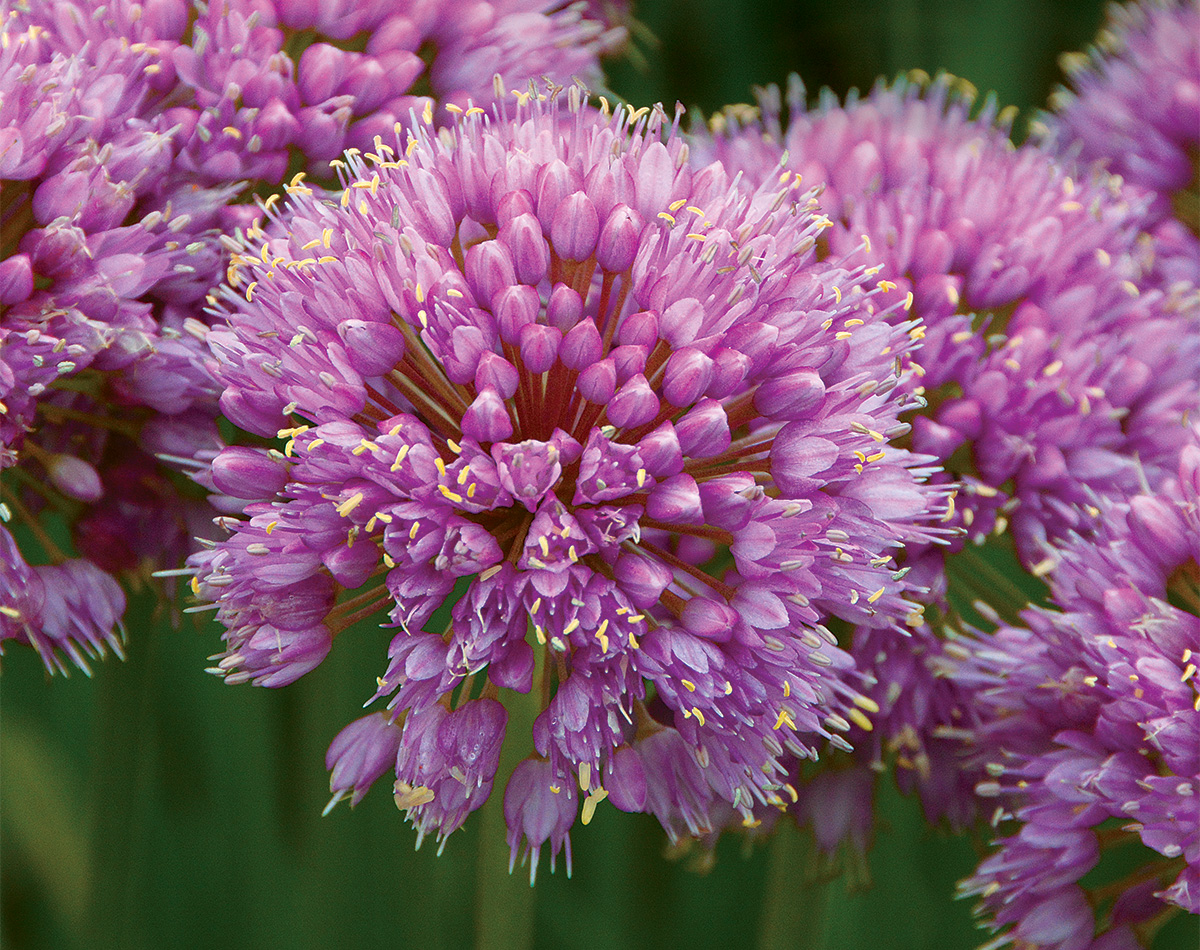 ‘Millenium’ is the standard by which other alliums are judged; its popularity has grown steadily since it was introduced at the turn of this century. (The misspelling is regrettably intentional.) Each rosy purple flower head, like a plump lollipop, tops a sturdy stem to 20 inches tall. Taken all together, the passel of nearly 2-inch spheres—dozens densely packed on every plant—is a fabulous midsummer spectacle. Dark green strappy leaves, bunched in generous clumps, are handsome and healthy throughout the summer and fall even as flower scapes turn brown. The botanical architecture of the flower—reminiscent of Bertoia’s sunburst sculpture—takes on another dimension when the tan fruit capsules split late in the year. Enjoy the full floral show without worrying about unwanted seedlings, because ‘Millenium’ is essentially sterile. It is also proving to be cold hardy to boot. I have read reports of ‘Millenium’—commonly listed for Zone 5—growing well in Zone 3 gardens in Canada.

Richard Hawke is an expert plantsman and the director of ornamental plant research at the Chicago Botanic Garden in Glencoe, Illinois.

Photos, except where noted: courtesy of Chicago Botanic Garden