Gardening for a Friend

Turning a little space into a garden

Hello, this is Cindy in Chicago. A good friend was expecting her first baby this past spring. I knew she would be busy with an infant, so I volunteered to help her grow some of her favorite plants—sunflowers (Helianthus annuus, annual).

Three years ago, we started a spring cleanup tradition of pulling weeds and amending soil in the long, slim border adjacent to the three-family brick building in Chicago (Zones 5b and 6a). This year I wanted to share this area next to the house with you as an example of a simple and low-budget garden with a mix of perennials and annuals. The previous fall, I checked with the other residents to see if they wanted space to garden; they did not, and the landlord was amenable to having someone else do some weeding and pruning.

Last fall, I started pruning—by about one-third—the two unruly rose plants a previous tenant had selected. The thorns were some of the sharpest I have ever come across, and the stems sometimes lashed out over the narrow sidewalk during windy weather. By moving two unused metal trellises from the garden bed in front of the garage, I attached stems with twine in arching shapes parallel with the wall and away from the front gate. I had never seen the red roses in flower and had no information on the variety. The hostas had been there for years, and three years ago the phlox was added—probably Phlox paniculata ‘Ultraviolet’. Finally, I divided and transplanted an unknown salvia from the back garden into this border.

Along with green leaves of different shapes, there was a succession of color in this border during the summer—red, purple, magenta, and finally yellow. So far there has been color from June through early October.

This spring when preparing the ground for the sunflower seeds, I incorporated some bagged cow manure and topsoil into the area—which half a shovel length down is a mash-up of hard soil and detritus of all sorts, including metal and glass. Early in the season, a lot of sunflower seedlings were eaten or trampled by wildlife, so I had to start again several times. Spraying a foul-smelling animal repellent was helpful in getting some plants to maturity.

Here are some of the best of the spring and summer photos, including my friend’s favorite: Helianthus annuus ‘Russian Mammoth’.

It was a pleasure to work out a simple design, observe the urban wildlife that was attracted, and even hear stories about what was noticed by the families in the building and neighbors as well! By the way, the new baby boy was sometimes my gardening assistant this summer, napping peacefully in the shade while I did some watering. 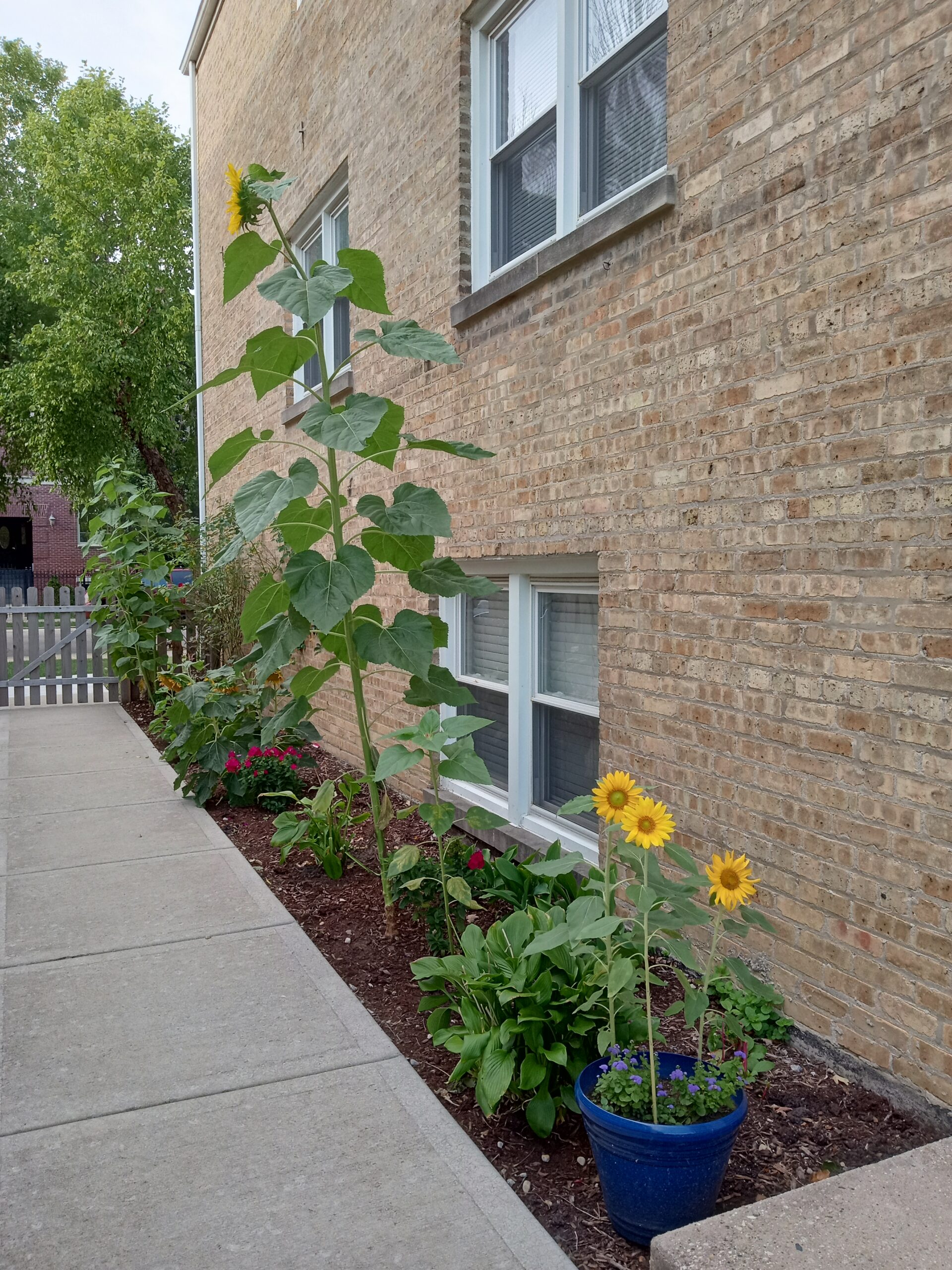 The border includes tall ‘Mammoth’ and dwarf ‘Teddy Bear’ sunflowers, and potted dwarf ‘Incredible’ sunflowers paired with light purple Ageratum houstonianum (annual). In this picture taken in early September, I have already divided the scorched hostas that were growing over the sidewalk and the salvia that has flopped over. 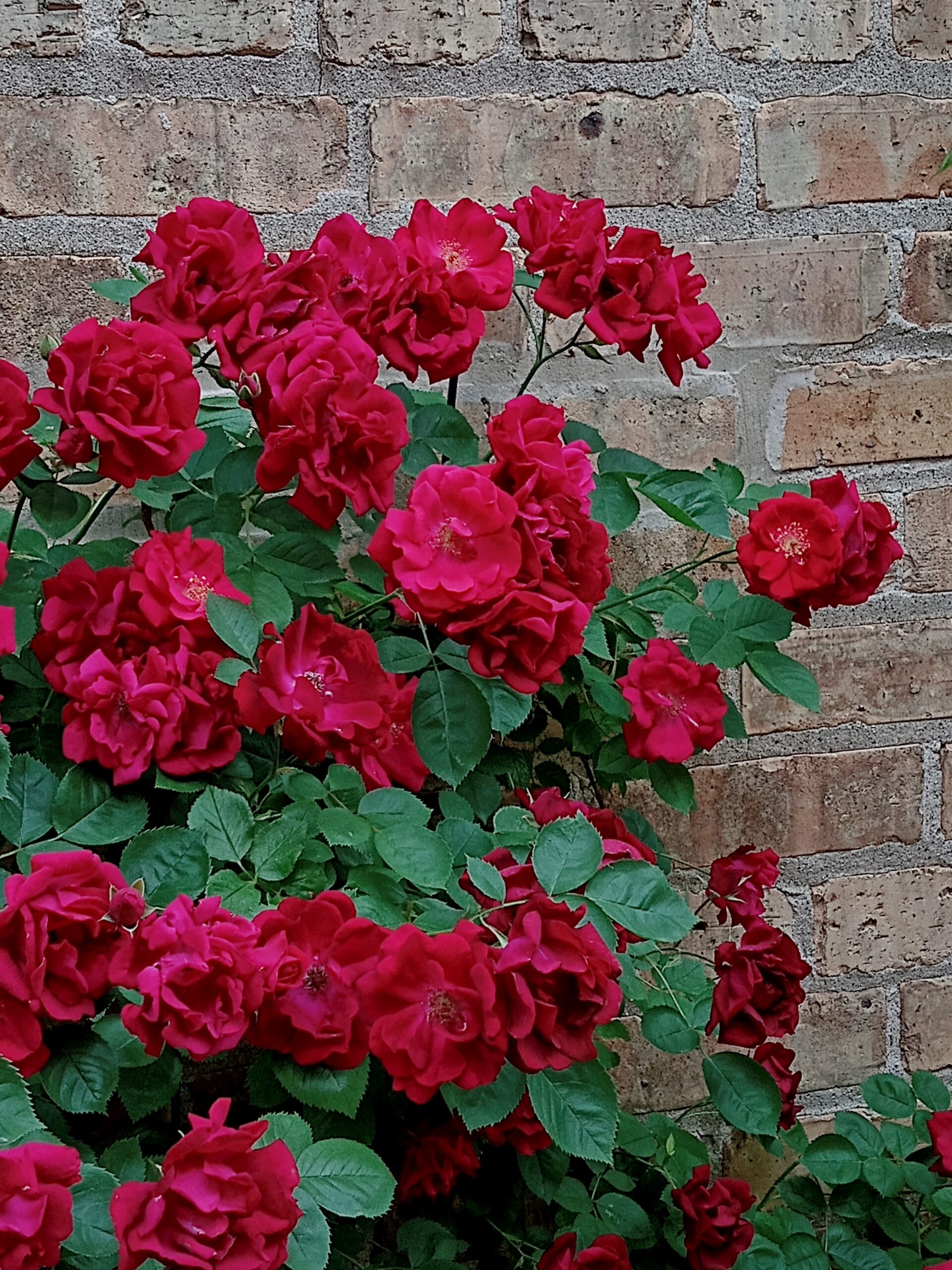 The rose bush in June. There were a lot of blooms, but the show was short. 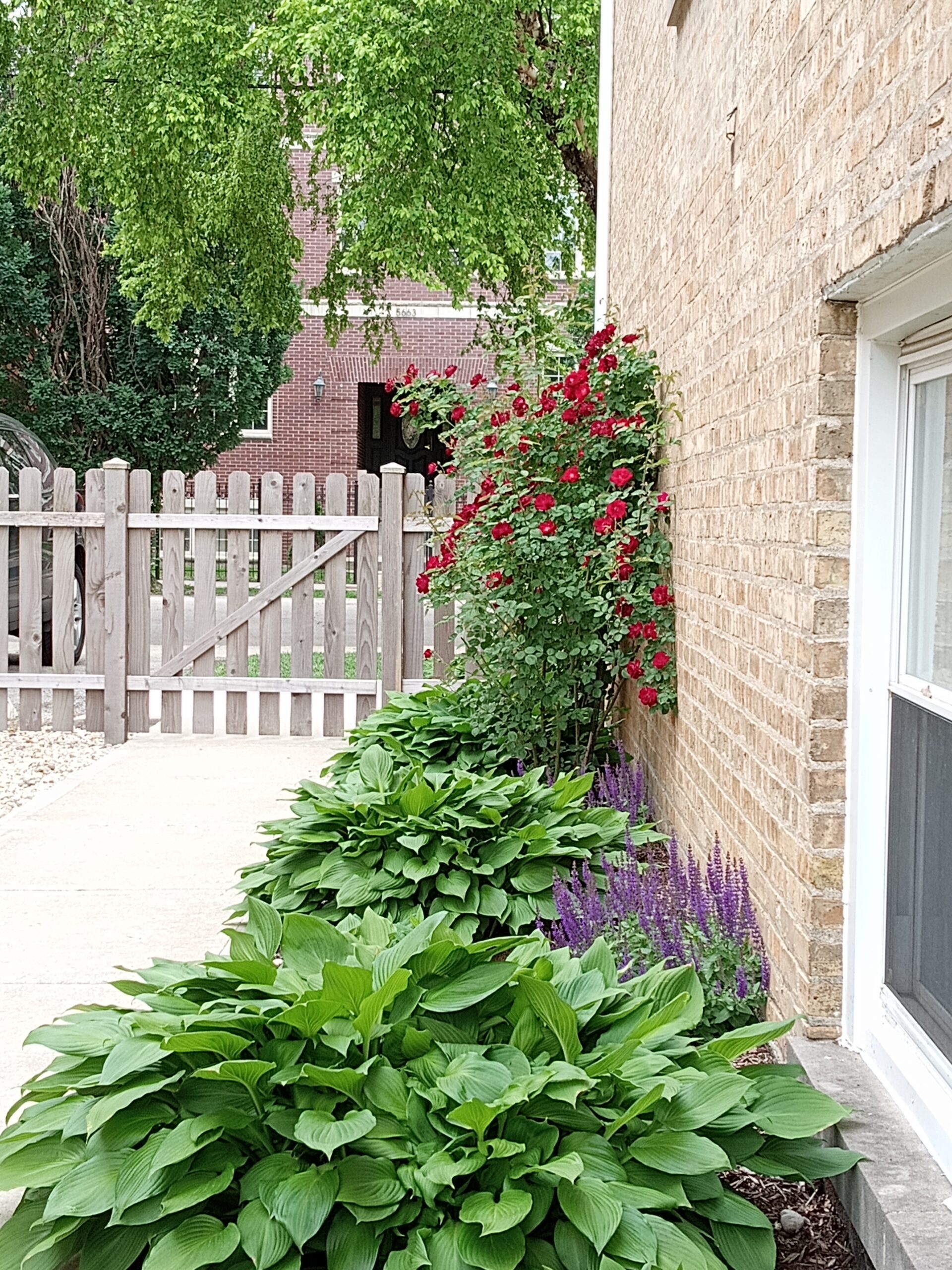 In June the border looked full and healthy. 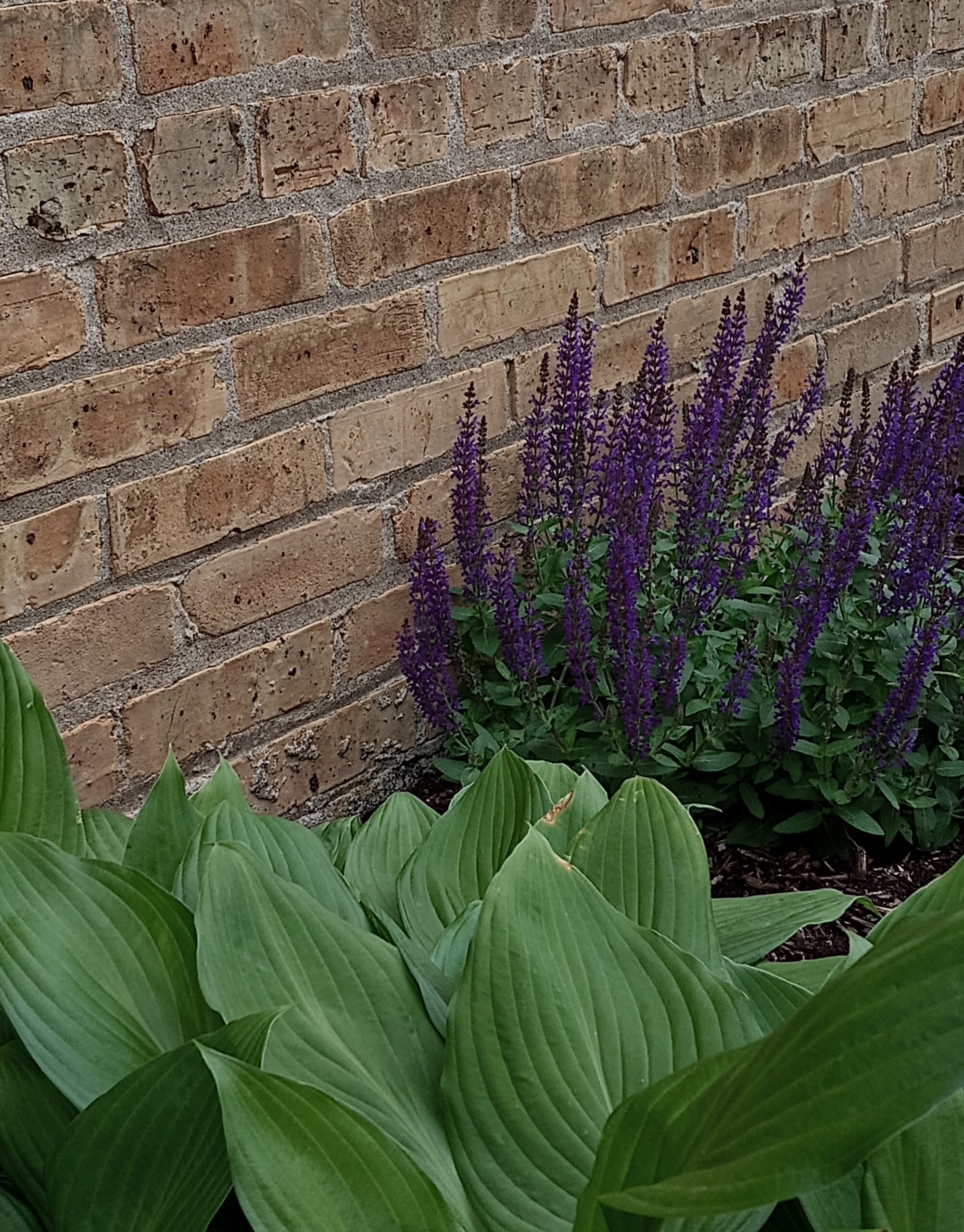 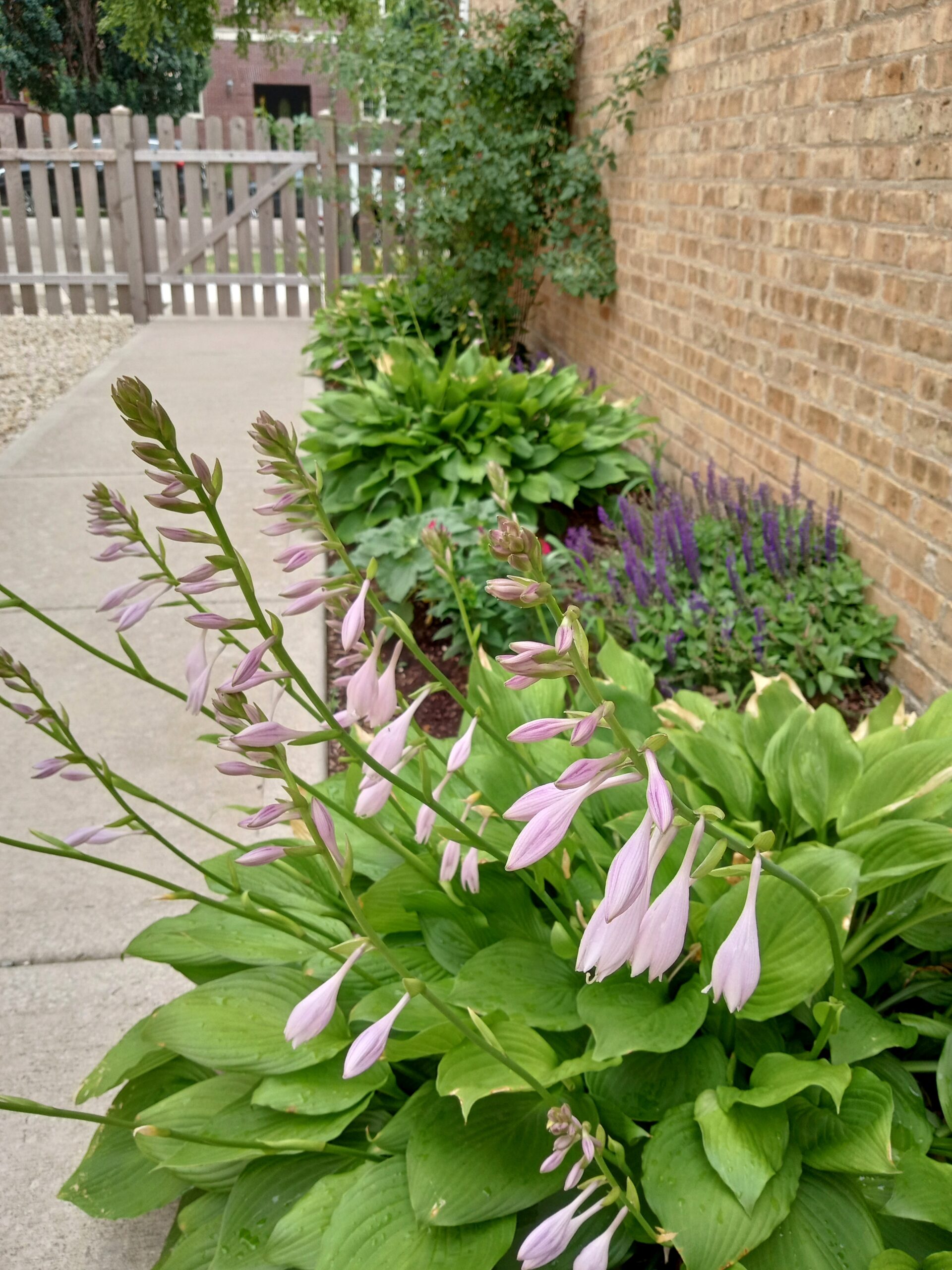 Hosta blooms in the beginning of August 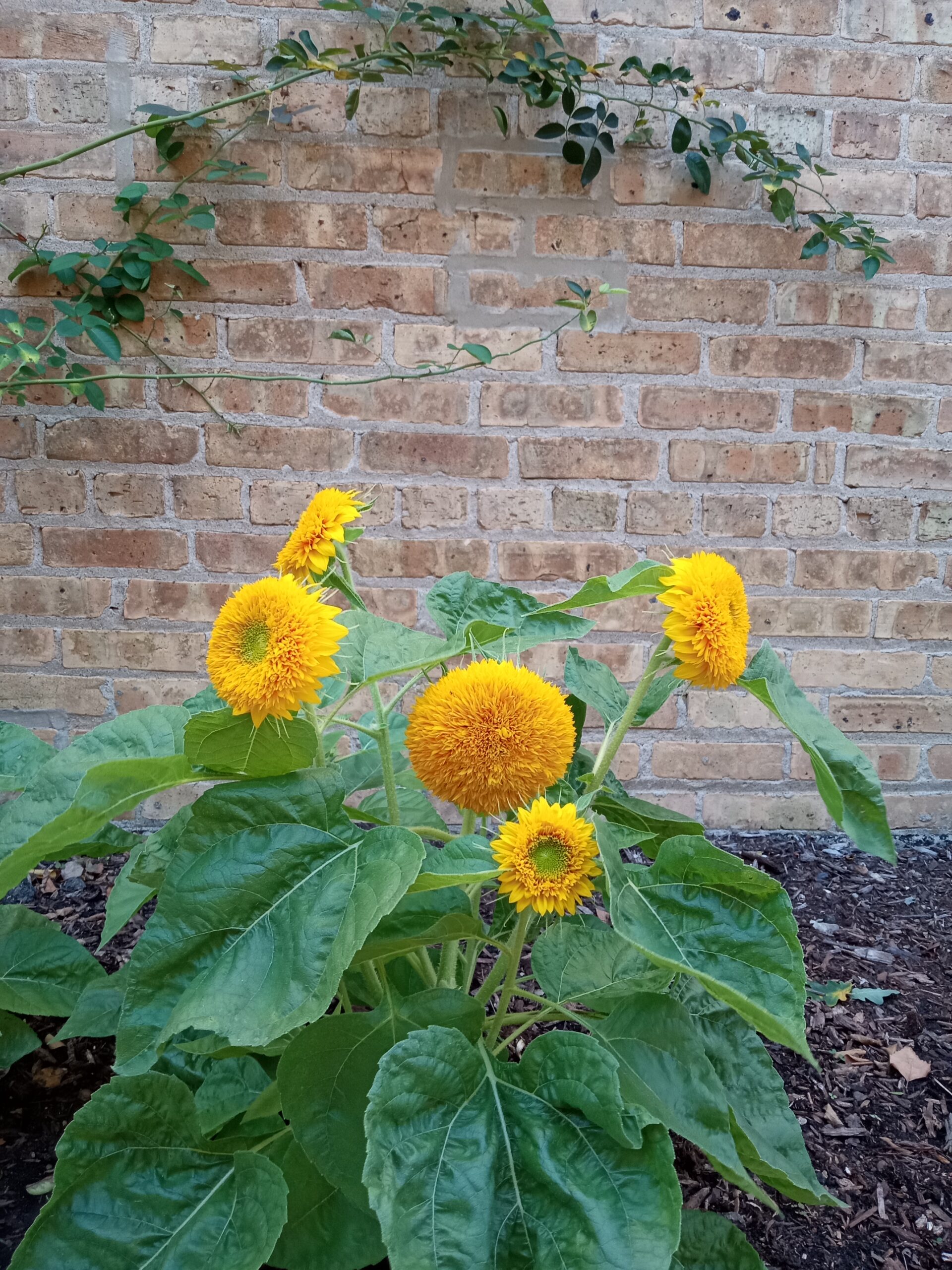 ‘Teddy Bear’ sunflower with the long stems of the rose 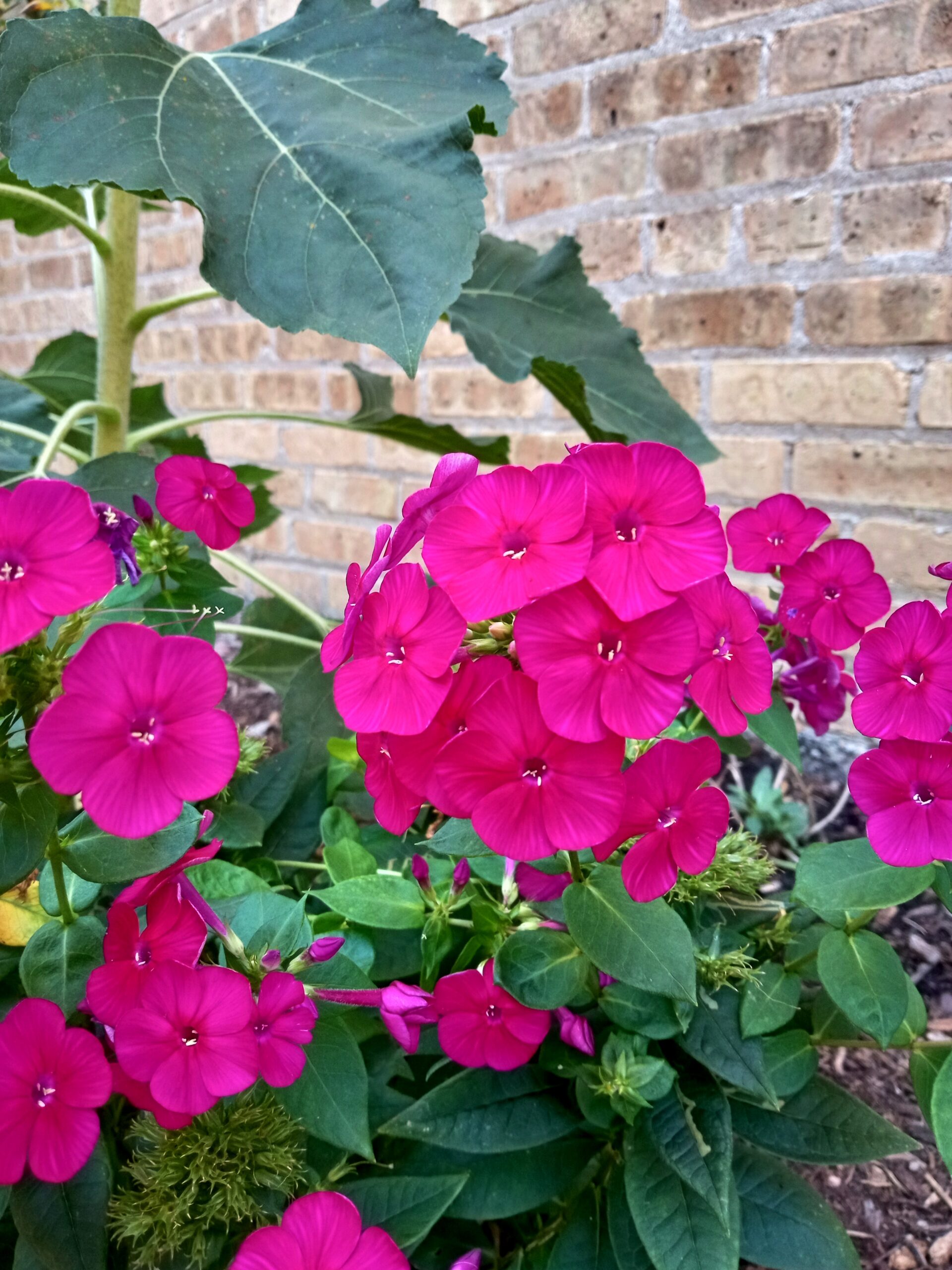 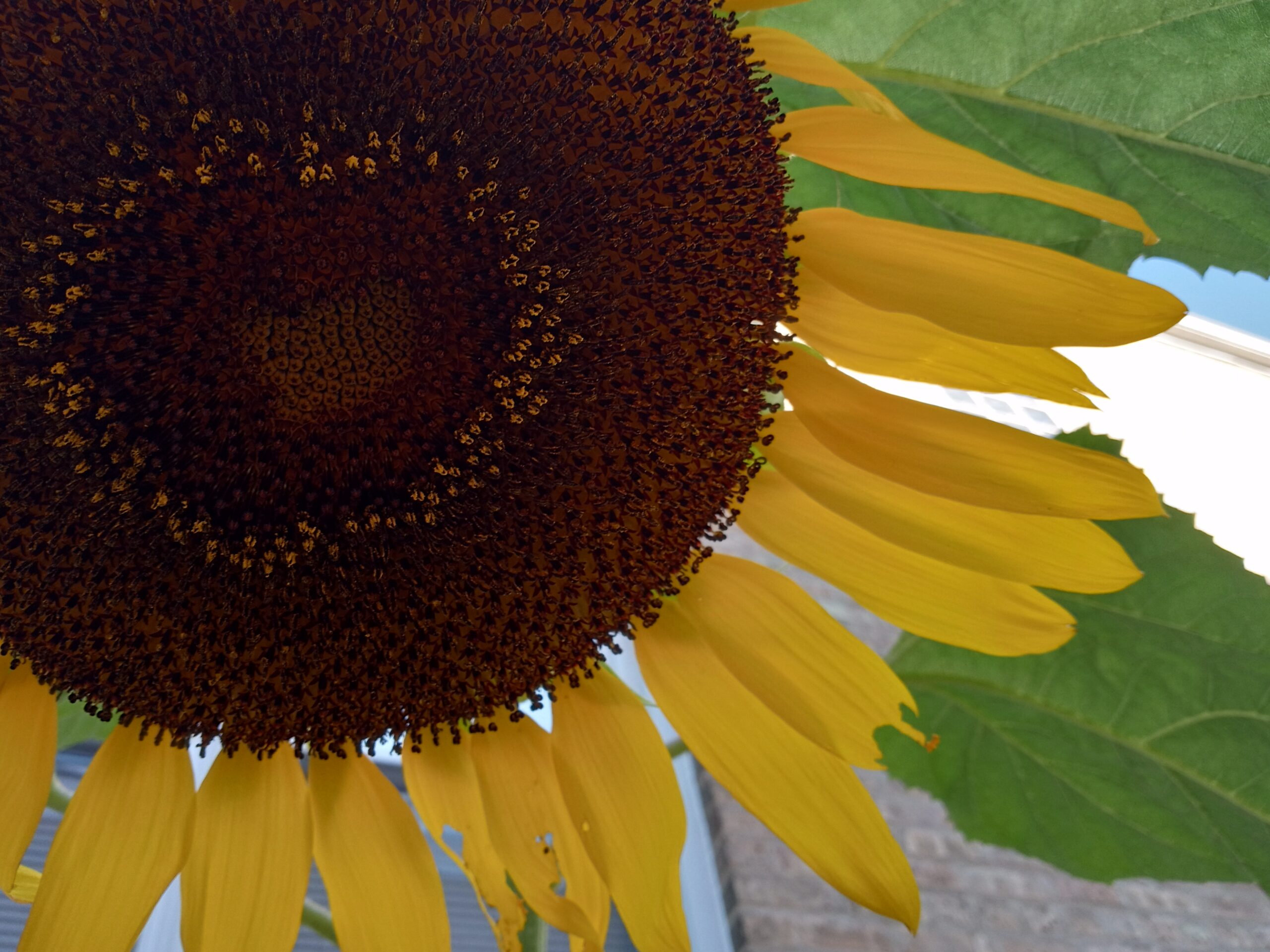 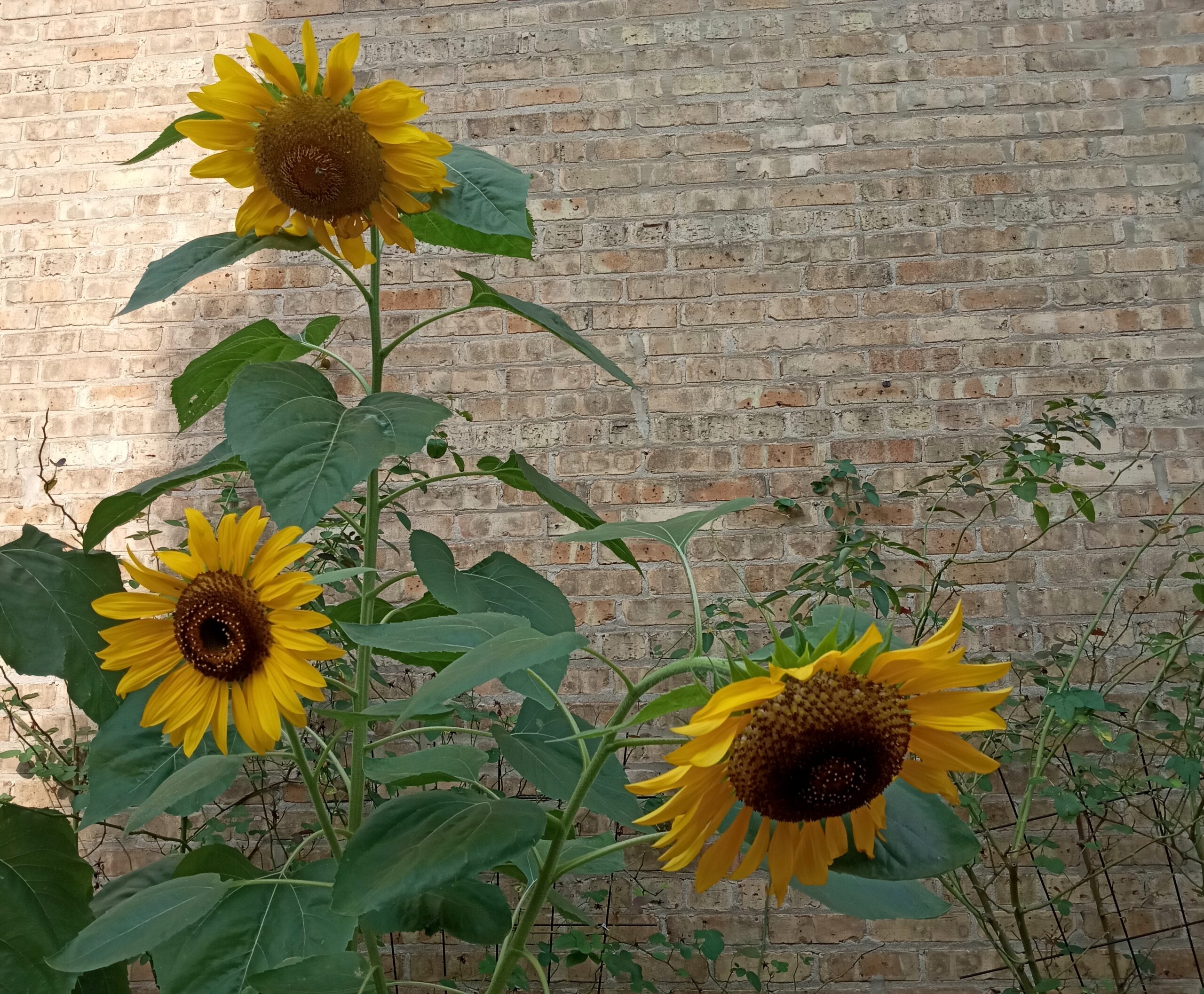 Three ‘Mammoth’ sunflowers in mid-September. These were planted late and so grew a little shorter and less vigorously than the earlier sowings. 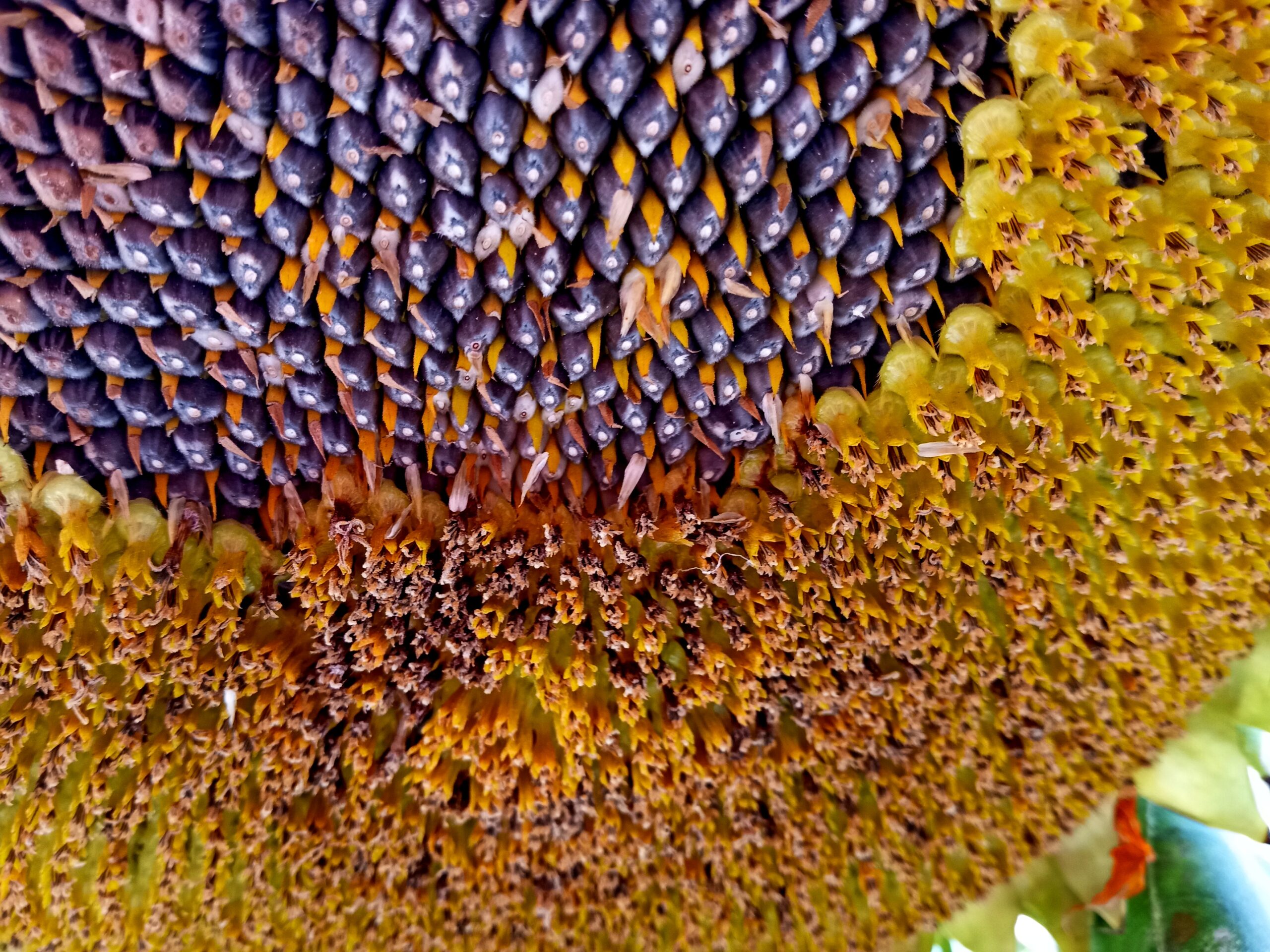