Where Formal and Natural Meet

Everyone has been to a house that has a “do-not-touch” room in it. It might be a living room with plastic covers on the couches or a dining room with uncomfortable chairs and an oversize chandelier hanging from the ceiling. Sure, these rooms usually have a formal feel (which was what the home owners were going for, presumably), but they aren’t comfortable. These are the rooms that, in fact, usually see the least amount of traffic because they are stuffy. Formality, however, does have its place—both inside and outside of the house. Most folks want their home and landscape to have some level of sophistication. And because most architecture revolves around straight, clean lines, our homes inherently have elements that lean toward the formal end of the spectrum. But how do you honor that sophistication without your friends and family feeling uncomfortable?

Because most architecture revolves around straight, clean lines, our homes inherently have elements that lean toward the formal end of the spectrum. 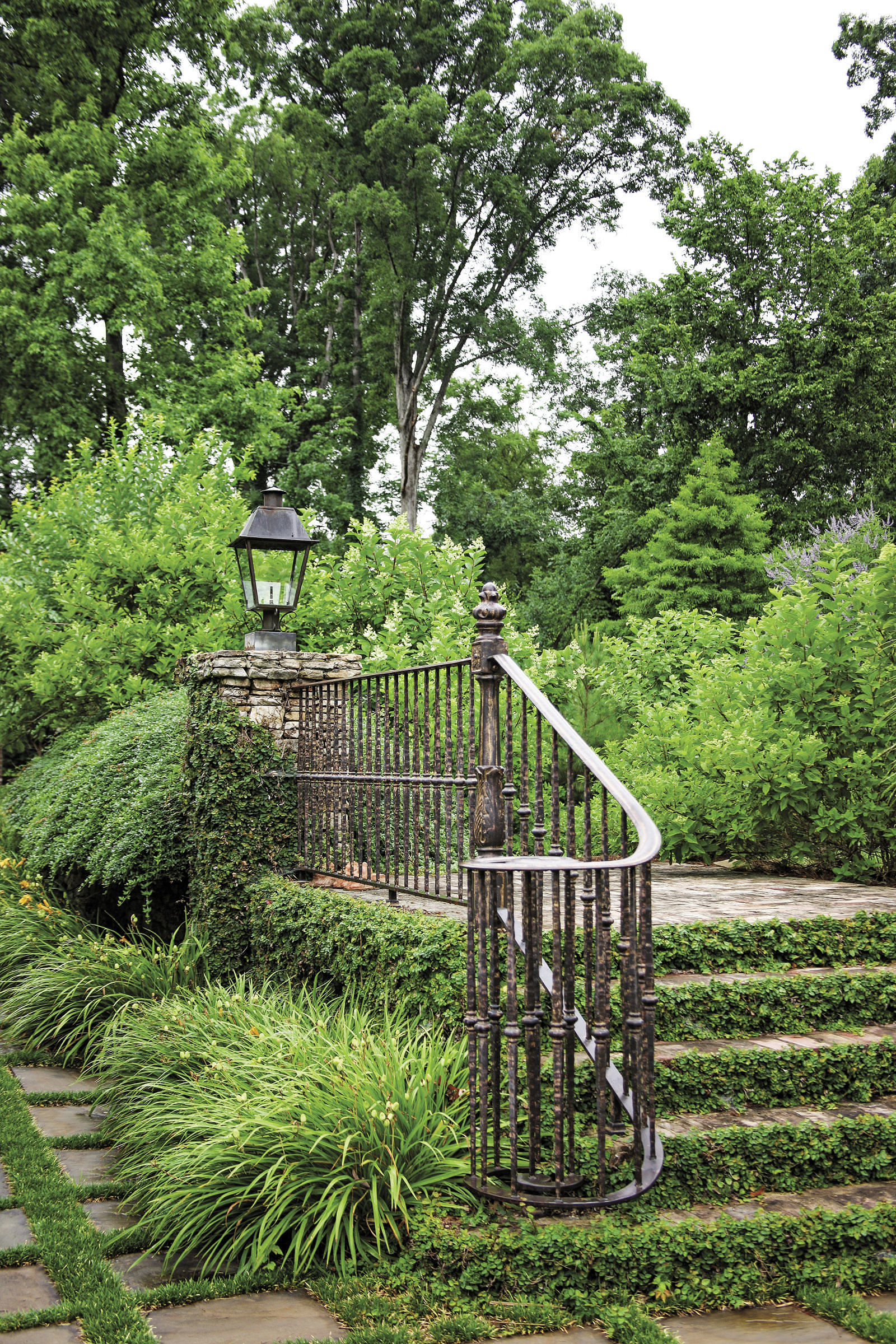 This was the balance that Rick and Mary Louise Stonecipher set out to strike with their garden. When the couple built their home in Jackson, Tennessee, in 2004, they knew that the garden they planned to install around it needed to do several things. First, it had to blend in with the architecture of the house itself: a refined, southern plantation–style home. Second, it had to be a welcoming space, a place where their children could do a somersault without feeling inhibited. Third, being business owners with an overly packed schedule, the plantings had to be somewhat low maintenance. The couple ultimately achieved a garden that is elegant—without feeling uptight—by relying on a design laden with geometric patterns, native plants, and designated lounging areas.

As a rule of thumb, the closer to the house a given area of the garden is, the more formal it will be. As you move farther from the Stonecipher home, you see fewer formal elements and the feeling becomes more relaxed. The element of the landscape that stands out most as you step out the back door is the checker­board pathway that greets you. It is the main walkway through the space. The geometric pattern was created using square pieces of slate and outlining them with dwarf mondo grass (Ophiopogon japonicus ‘Nanus’, USDA Hardiness Zones 6–11). This path sets the tone for the gardens surrounding the house and is itself an unexpected focal point. The linear layout of the path directs nearly all of the traffic flow, as well.A variety of nearby walls and hedges take their design cues from the checkerboard pathway. Brick knee walls around the courtyard area have a diamond pattern, reminiscent of the main path. A series of low hedges and linear plantings further echoes the geometry. All of these straight lines give the overall landscape a formal flair and help organize the space.To balance out all of these stately hedges and geometric patterns, the Stoneciphers added a limited number of informal elements to the areas closest to the house. Along the foundation of the house, for instance, you’ll find neat, linear rows of boxwood hedges, paired with sprawling panicle hydrangeas (Hydrangea paniculata, Zones 4–8). Without the hydrangeas, the area might seem over-the-top formal. To lessen the perceived rigidity of some of the walls, terraces, and fences, the Stoneciphers used an assortment of hardscaping materials. More brick and iron fencing was used close to the house to keep things formal, while reclaimed lumber and natural stone was used farther away because these materials have a more informal feel. 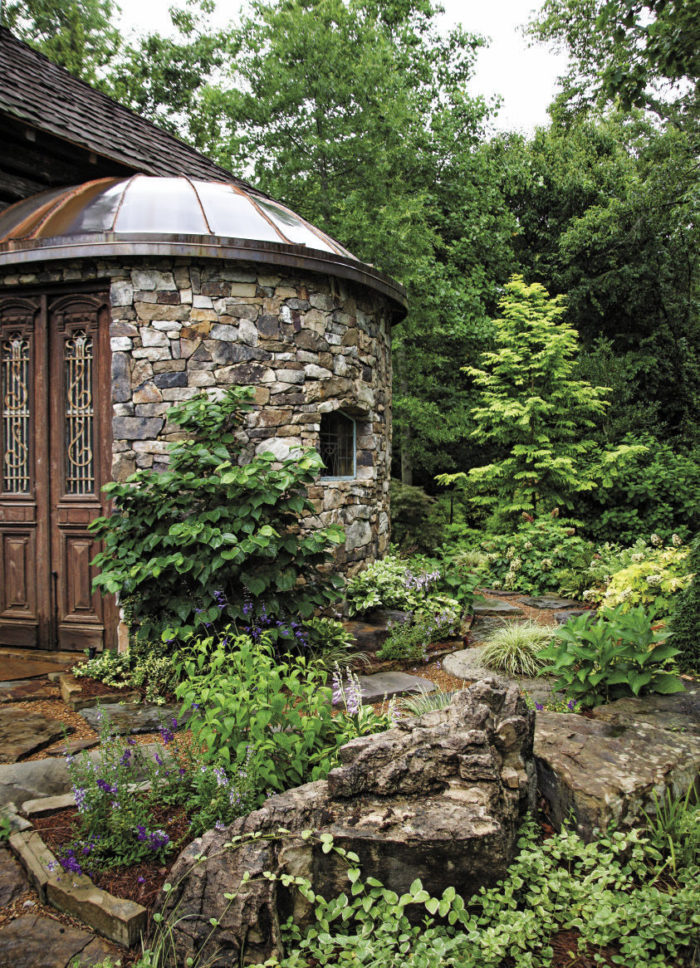 With formal garden design, content (the plants) is usually secondary to form. The Stoneciphers, however, used lots of native plants that wouldn’t typically be thought of as formal. They provide a perfect counterpoint to the rigid lines created by the garden’s geometry. Plus, many of these plants are built to thrive in a southern climate without an unreasonable amount of care. The couple planted several native eastern redbuds (Cercis canadensis, Zones 4–9) by the pool area, for example, because the trees are tough and would thrive despite being situated in a spot far from the house that gets little attention. Also, the loose, open canopy of the redbud—though not formal—bridges the gap nicely between the native forest beyond and the more refined plants in the gardens surrounding the house.To pull the relaxed look further into the landscape, Rick and Mary Louise paired plants that look a little wild, such as orna­mental grasses and sprawling spireas (Spiraea spp. and cvs., Zones 4–9), with more formal plants, such as dwarf English boxwood (Buxus sempervirens ‘Suffruticosa’, Zones 5–8) and inkberry holly (Ilex glabra, Zones 4–9). The formal plants are used primarily in hedging close to the house, and they complement the home’s elegant architecture. The informal plants help loosen things up a bit, softening any perceived rigidity.

There are several recreation areas in the backyard, each with varying degrees of formality. The closer an area is to the stately house, the more formal it is. The two best examples of location dictating the level of formality are the pool, which is mostly hidden from view, and the outdoor-kitchen pergola, which is a clear destination point at the end of the checkerboard pathway.The outdoor-kitchen pergola falls more into the formal design vision because it is only a stone’s throw from the house. It has a high vaulted ceiling and large imposing columns, which give it a regal feel. It is, however, quite welcoming because of the reclaimed materials used to construct it and the casual seating area inside. The pool, on the other hand, sits farther away from the home and is, therefore, fairly informal in design. Pools are generally relaxed spots, but Rick and Mary Louise purposely enhanced this pool’s beauty and elegance by adding a waterfall and a sophisticated stone pool deck, and surrounding the location with lush plantings. Various outbuildings add character—not just structure—as well. The couple made sure, as they did with the plants in the garden, that the recreation areas have the proper balance of formality and informality. Through careful planning and attention to detail, the Stoneciphers were able to achieve a formal and organized landscape that matched the sophistication of their home while still keeping the space welcoming and friendly.

The farther from the house, the less formal

Are you looking to strike a balance between a landscape that is formal (yet not stuffy) and one that is informal (yet not sloppy)? The shape, texture, or color of potential plants and hardscaping can help you figure out if something is formal or informal, and that, in turn, can help you figure out where to use that element in the landscape. In general, formal areas are ones that are closest to the house.