Snowdrops Chase Away the Winter Doldrums

Amid the sloshing, squishing, and squelching of spring in the Northwest, green tips and small white flowers start pushing through the soil. Some are up and flowering freely in January, and some are still just green shoots, but the excitement is building in the flower beds. A self-confessed Galanthophile, I will admit to having many different varieties of snowdrops (Galanthus spp. and cvs., Zones 3–9) in my beds.

My obsession started one dreary spring day about 20 years ago. I was walking in the woods and stumbled on an abandoned house slowly sinking into decay and, in reality, the ground. Around the footprint of the house, among the nettles and blackberries, were patches of snowdrops. I was at once struck by the thought of someone, gardener or not, planting the small bulbs many years ago. Now large patches, they had grown and spread unassisted into sweeps of nodding white flowers. I will admit to digging in the soft ground and bringing a handful home to my garden. I have brought them along to each new house I’ve had, and they are now thriving in perfect conditions along a stream bed.

Often Galanthus are thought to be native to the United Kingdom; however, the theory that they were brought to the UK by Italian monks in the 10th century is closer to the truth. They are found in many places in Europe, and there are great enthusiasts in many different countries. In the United States, snowdrop fever usually starts around the first of February. There are Facebook groups with hundreds of followers posting daily. Social media platforms are also full of pictures. Growers on this side of the Atlantic are slowly building stock of different named varieties to share with U.S. gardeners. All of this is very exciting to a collector like me.

Conditions in the Pacific Northwest are prime for snowdrops. They like to nestle under trees, especially deciduous ones, where there is bright light aplenty in the winter and early spring. Moist soil is not required but will help with the growth and production of new bulbs. Acid soil is fine for most snowdrop species, although some do like lime soil. Planting lime-loving snowdrops near a concrete foundation or walkway will provide the necessary lime soil.

After flowering, snowdrops can be left undisturbed. I have some spiller perennials, such as corydalis (Corydalis spp. and cvs., Zones 4–8) and geraniums (Geranium spp. and cvs., Zones 3–9), near my snowdrops to cover the ground once these white-flowering jewels go dormant. My collection has snowdrops in many different shapes, sizes, colors, and bloom times. There are several species that are among my must-haves and that are great for those gardeners who are just starting down the snowdrop path. 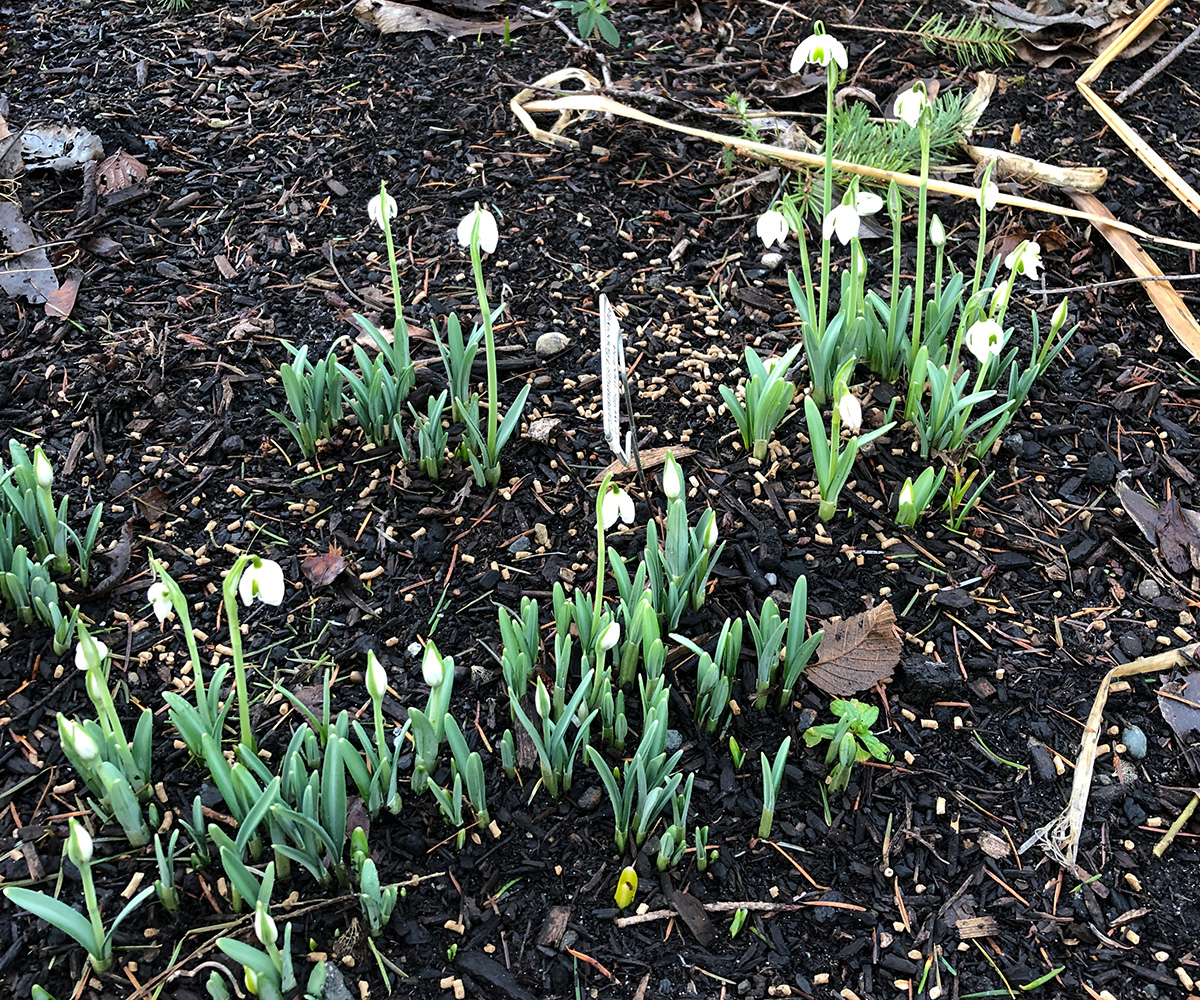 It is a solid choice to begin with the 4-inch-tall common snowdrop, which is well on its way to flowering by March. Widely available by mail order or in nursery bulb packages, it is easy to find and grow. Be sure to get these bulbs in the early fall and keep them refrigerated until ready to plant. I usually wait until the temps are below 50°F to plant. Place them in a location with moderate moisture and that receives partial sun. As with other species, common snowdrops will push through snow (the spathe is especially made for this) when it is time for its white blooms to appear. Deer don’t bother them, but slugs can be a problem. Grit around the base of the plant is great, because it keeps the blooms clean as well as slugs at bay. 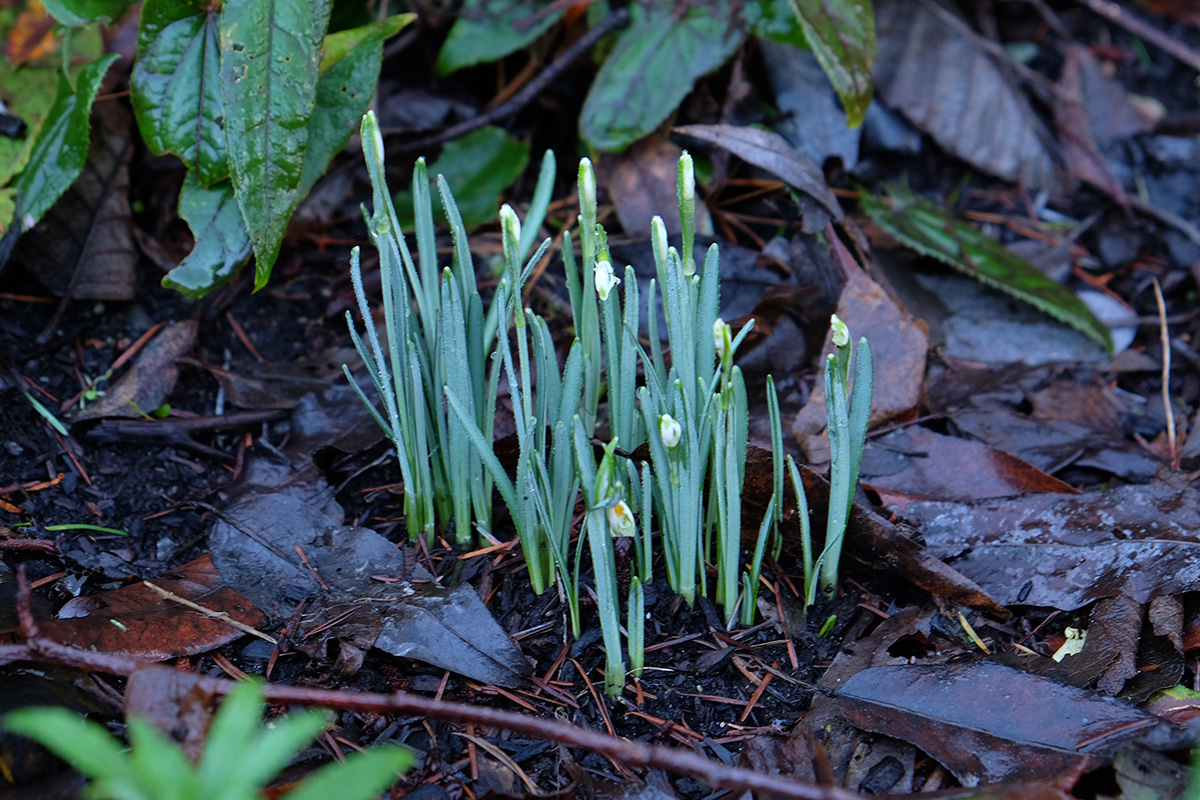 I wouldn’t call it giant at 6 to 12 inches tall, but in comparison with common snowdrop, giant snowdrop is about twice its size and has broader leaves. This species blooms from February to March and prefers the same conditions as common snowdrop as well. It will naturalize wonderfully by offsets and seeds. 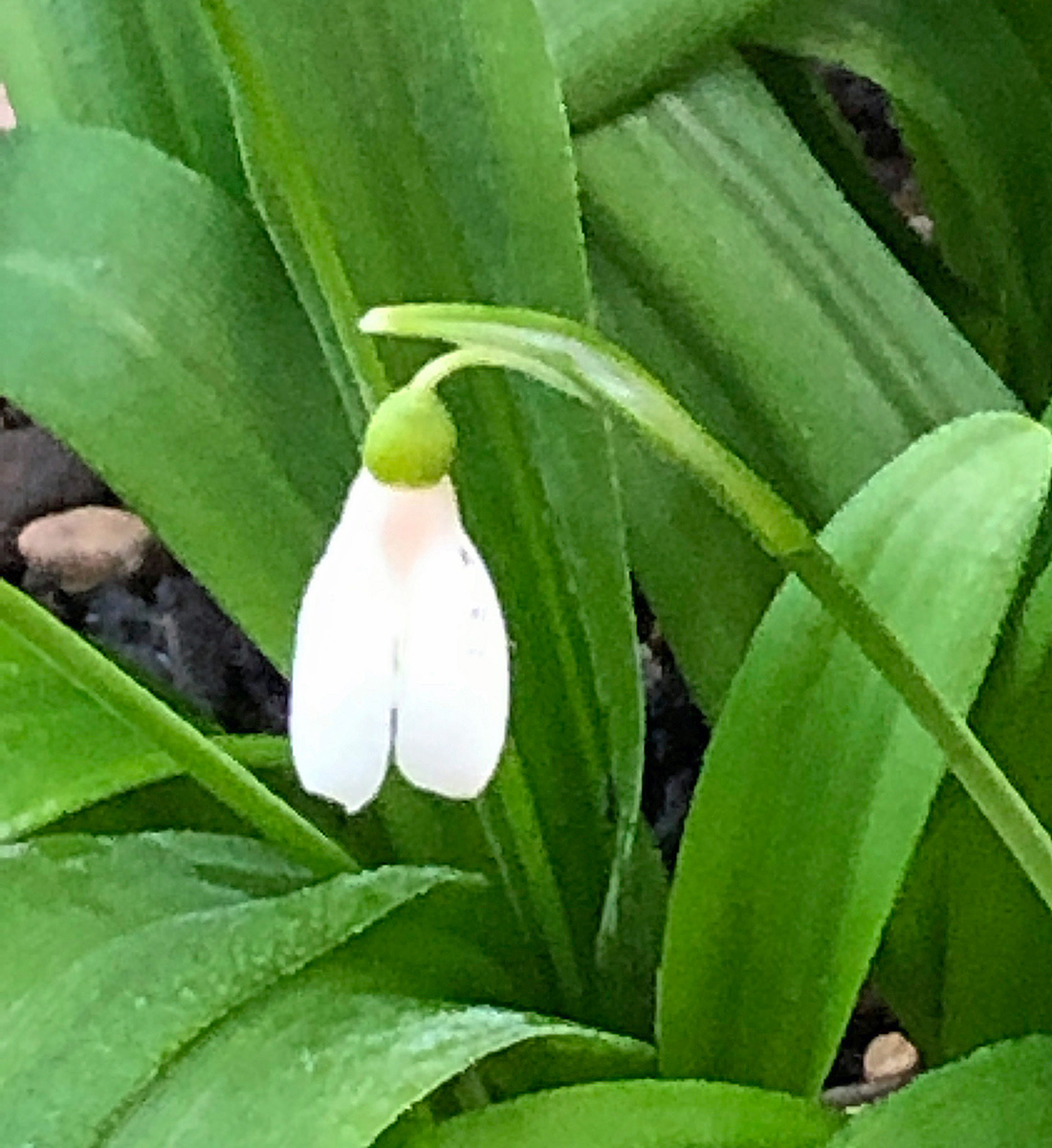 Native to Turkey and Russia, green snowdrop also naturalizes with ease. It can take drier soil and more sun than the others mentioned. It has wide, waxy leaves that show off the white pearl-shaped blooms. At about 6 to 8 inches tall, this species also blooms in February-March.

One of the coolest things about snowdrops is their promiscuity. They are pollinated by early insects and will mutate into different colors, sizes, and other unusual features. Waiting for nature to do the dirty work is fun, but you can mess it up a bit by integrating colored snowdrops with green ones, different outer and inner markings—giving the pollinators free rein over changing the next generations.

When it comes to snowdrops, these are just the tip of the iceberg. Have fun exploring these easy bulbs on your own, and enjoy bringing new life to your garden at a time of year when we can really use a botanical boost.

—Susan Calhoun is the owner of Plantswoman Design in Bainbridge Island, Washington.