Use these hellebores, bulbs, and shrubs for blooms from fall to spring 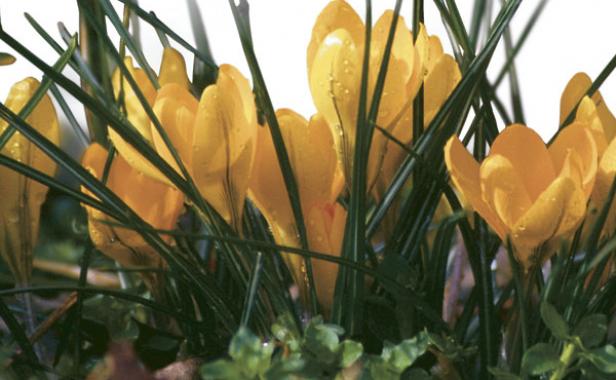 In winter I see the shape of my garden. Paths, fences, and stone walls emerge from their summer blankets of bloom to stand alone and exposed in a landscape shorn of color. In this austere landscape, flowers are more precious to me than jewels. I’ve been searching for winter-blooming plants for years, and have discovered many that bloom in this, the coldest of seasons. Today at Montrose, my garden in Hillsborough, North Carolina, there is bloom every day of the year.

A hellebore marks the season’s start

Winter begins shortly after Thanksgiving, when Helleborus vesicarius revives. I always worry about plants that go dormant and disappear in summer, so I rejoice each year at the sight of its emerging shoots. Large, shiny, dark-green leaves grow to about 5 inches above the ground, followed in January or February by up-facing, green, cup-shaped flowers with burgundy markings inside and out. 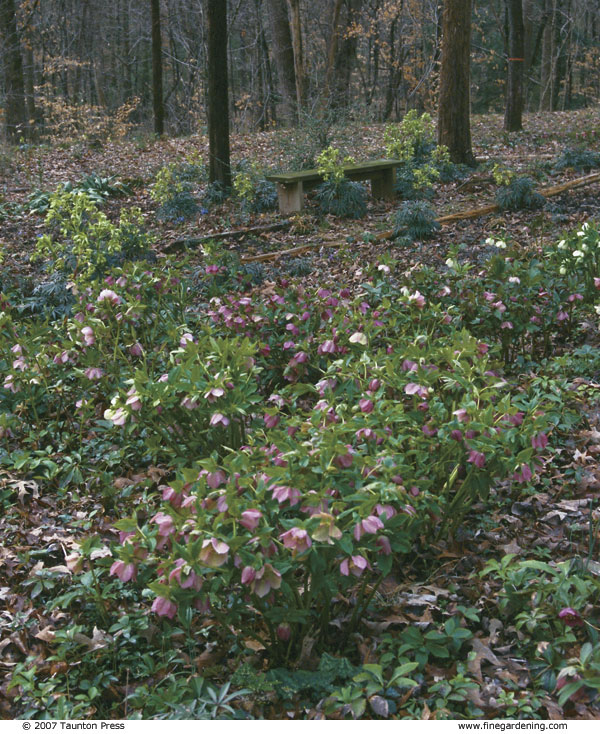 I grow every species of hellebore except one, so I also have some that bloom later in the season. Depending on the species and variety, hellebore blooms begin in November and continue into April. Many self-sow, so I now have thousands naturalized in the shade of my woods. Other green-flowered hellebores that bloom in winter are H. viridis, H. odorus, H. cyclophyllus, and H. multifidus.

The best-known hellebore, the Christmas rose (H. niger), blooms for me in late November. Because I have grown many seedlings from many different sources, I have some forms of H. niger that wait until March to bloom. Flowers vary in size and shape. Some are as large as 4 inches in diameter, while others are as small as an inch and a half across. H.n. ssp. macranthus, one of my favorites, holds its darkgreen leaves well above the flowers, hiding them, but also protecting them from extreme cold.

One of my favorite Helleborus orientalis hybrids, ‘Old Early Purple’, has dusky, dark-burgundy flowers visible in bud by Christmas and in bloom, usually, during January. A chance seedling of mine with pale-yellow flowers always opens a few wide-petaled blossoms just after the new year. On the wooded hillside, a dark, black-burgundy form from Elizabeth Lawrence’s garden begins to bloom in January. 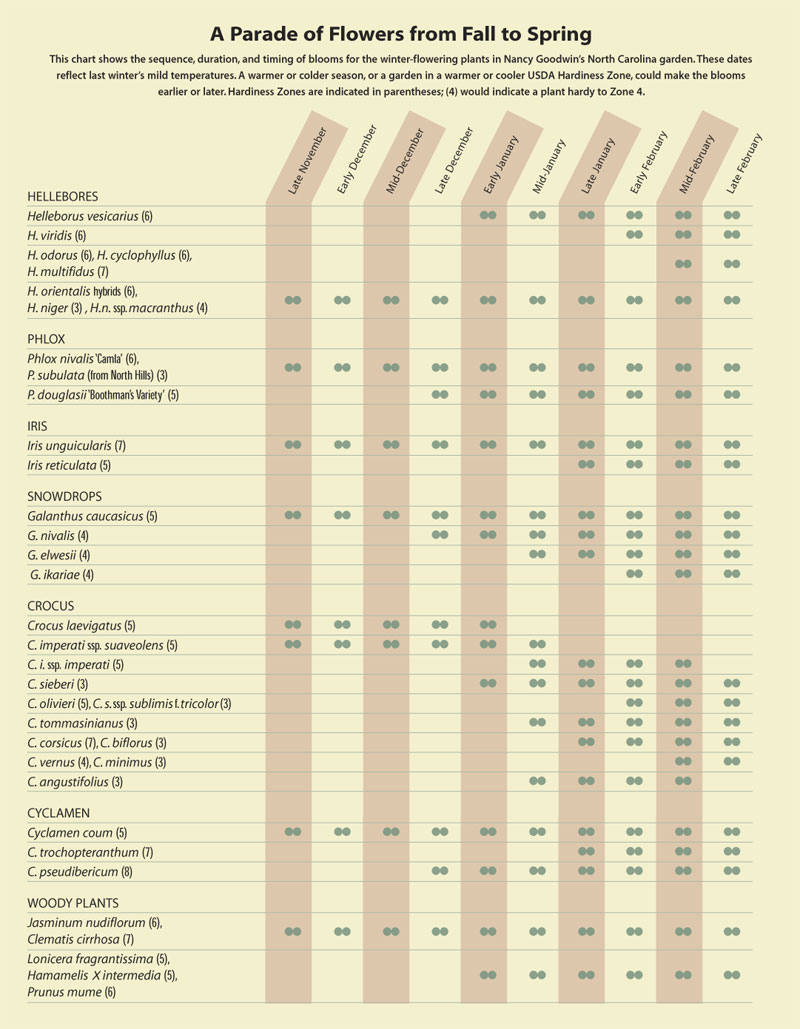 A few other perennials bloom along with the hellebores in my garden during winter’s cold. Phloxes bloom all season, seldom in profusion, but always with a few flowers. They like winter sun and demand good drainage. The earliest of them to bloom, Phlox nivalis ‘Camla’, opens its large, bright-pink flowers above needlelike foliage as early as November. About a month later, P. douglasii ‘Boothman’s Variety’, opens its purple-eyed, violet flowers. P. subulata from North Hills, the Vermont garden of Joe Eck and Wayne Winterrowd, blooms nearly all year with near-white flowers bearing crimson centers.

I’m fond of a number of winter-blooming irises as well. The Algerian iris (Iris unguicularis) first flowers about Thanksgiving. Slender, green leaf blades often hide the gray or beige buds that open to reveal fragrant, blue-purple flowers. This iris is dormant during the summer months and wants lime and a site in sun or part shade. Don’t give it any additional watering during summer dry spells.

Iris reticulata sends up its blue-gray leaves before the New Year, but the flowers wait until early February to open. It grows happily in ordinary soil—even if it’s dry in summer—but blooms best with winter sun. Having collected a number of different cultivars, I now have blooms in many colors from early February to early April. Dark, burgundy-red ‘Pauline’ and ‘Hercules’ open first, the broader-petaled ‘George’ opens next, and the exquisite, near-white ‘Natascha’ is latest of all.

The most exciting plants in my winter garden are little bulbs—snowdrops, crocuses, and cyclamen. My first winter snowdrop, Galanthus caucasicus, appears in late November. This snowdrop blooms until G. nivalis begins just after Christmas. Both like winter sun and soil that is dry in summer and moist in winter. G. elwesii blooms a little later and by February, we find it throughout the woods and rock garden. This species is easy to identify by the green markings at the top and bottom of its downturned cup. Some of the cups are entirely green. Before these species finish flowering, G. ikariae comes into bloom with broad, bright-green leaves and cups marked with green at the tips.

Along with the snowdrops, crocuses brighten the winter months. My winter-flowering crocuses, Crocus imperati ssp. suaveolens and C. laevigatus, usually appear by Christmas. C. laevigatus has fragrant, violet flowers feathered with purple on the outer petals, and C. imperati ssp. suaveolens has fragrant, violet flowers opening from creamy beige buds striped with purple. Another subspecies, C. i. ssp. imperati, has large but unscented flowers in January and February. Before they finish, C. sieberi begins blooming with white or violet flowers with yellow throats.

In late February or early March, C. s. ssp. sublimis f. tricolor blooms with flowers having horizontal bands of violet, white, and yellow. Next come the tommies (C. tommasinianus) that bloom in sun or shade with white, purple, or violet flowers. They look delicate but take the cold. By February, a flood of crocuses fills the rock garden, with C. angustifolius, C. biflorus, C. olivieri, C. corsicus, C. minimus, C. vernus, and others opening every day. Some of these species cross and self-sow, so every year there are new hybrids and seedlings to enjoy.

Crocuses grow as well beneath the shade of trees as they do in full sun. Winter sun produces better foliage that, in turn, produces corms that bloom the next year. Rodents find the corms delicious, but working a few stones into the soil when planting will help protect the plants.

Few genera match cyclamen for year-round bloom. At Montrose, I can always find flowers on one or more species. The winter-flowering ones give me great pleasure, with variable leaves and small, sometimes fragrant flowers that show up against the bare, brown earth. Though they look fragile, I find perfect blooms even after nights when the temperature has dipped to 4°F. The first winter-flowering cyclamen to bloom here at Montrose, Cyclamen coum, appears beneath the bare branches of our dawn redwood (Metasequoia glyptostroboides) about Thanksgiving. This early flowering Russian form has heart-shaped leaves beautifully marked with silver, and flowers that are white, pink, or dark crimson.

Shortly after Christmas, more C. coum bloom beneath our Himalayan cedar (Cedrus deodara) and in the woods. By the end of January, they are everywhere. In February, C. trochopteranthum opens its distinctive, twisted petals. Last year, I had a few C. pseudibericum flowers by Christmas and masses by February. This species has large, pink to dark red-violet flowers with black at the mouth above a margin of white.

Some woody plants and vines brighten the landscape with flowers and fragrance. By Thanksgiving, we see bright-yellow buds with touches of red on winter yellow jasmine (Jasminum nudiflorum) planted in full sun. The slightly peachy fragrance of winter honeysuckle (Lonicera fragrantissima) tempts us to breathe deeply the aroma of its creamy white, pink-tinged flowers, which open along bare, silver-gray stems. The earliest winter-flowering witch hazel (Hamamelis X intermedia) at Montrose is ‘James Wells’, a bright yellow-flowered shrub that is usually in bloom by mid-January. A little later, ‘Jelena’ opens with golden-yellow and coral petals that look like twisted threads. Witch hazels aren’t fussy about soil.

They bloom well in high shade in our somewhat acid, clay loam. Fragrant Japanese apricots (Prunus mume) begin to bloom whenever we have a mild spell. They like full sun but will also flower in part shade where the shelter of overhanging branches may protect blossoms from untimely freezes. The cultivar ‘Peggy Clarke’ often opens its single pink flowers as early as January, while the dark, crimson-flowered ‘Kobai’ waits until later.

Clematis cirrhosa produces bright green leaves as it recovers from summer’s heat. Pendant, creamy yellow, fragrant flowers appear in the rafters of our lath house, growing so high we have to stand at a distance to see them. It bears fluffy seed clusters that look like puffs of snow among the flowers.

By the end of February, the swollen flower buds on the elms become racemes of brownish-green flowers, and the maples show their red clusters of stamens. Owls call to each other at twilight. We know it is spring.