How to Spruce Up Your Veggie Garden

Use these six tips from the pros to enliven your design

Edible gardens are, too often, purely utilitarian spaces relegated to the outer reaches of an overall garden design. But they can be so much more with just a few design tweaks. The vegetable garden at Tower Hill Botanic Garden in Boylston, Massachusetts, serves as the perfect inspiration for making a vegetable garden a fun, beautiful place to spend time in, where you’ll want to linger while weeding and perhaps even sit for a spell to watch the tomatoes ripen. Let’s explore some of the ways this garden beckons and charms.

The gardeners at Tower Hill pore over catalogs in the off-season, searching for vegetable varieties that are both tasty and beautiful. They intersperse these edible varieties with ornamental plants that serve a secondary purpose. Whether these plants have blossoms that attract pollinators, seed heads to adorn a holiday table, or flowers that can be cut for a vase, everything has a more-than-just-for-looks purpose. Here, a row of ‘Lemon Gem’ marigolds (Tagetes tenuifolia ‘Lemon Gem’, annual) forms an attractive border along a bed while serving, too, as a source of edible flowers. Marigolds are also thought to help control populations of harmful nematodes in vegetable gardens. 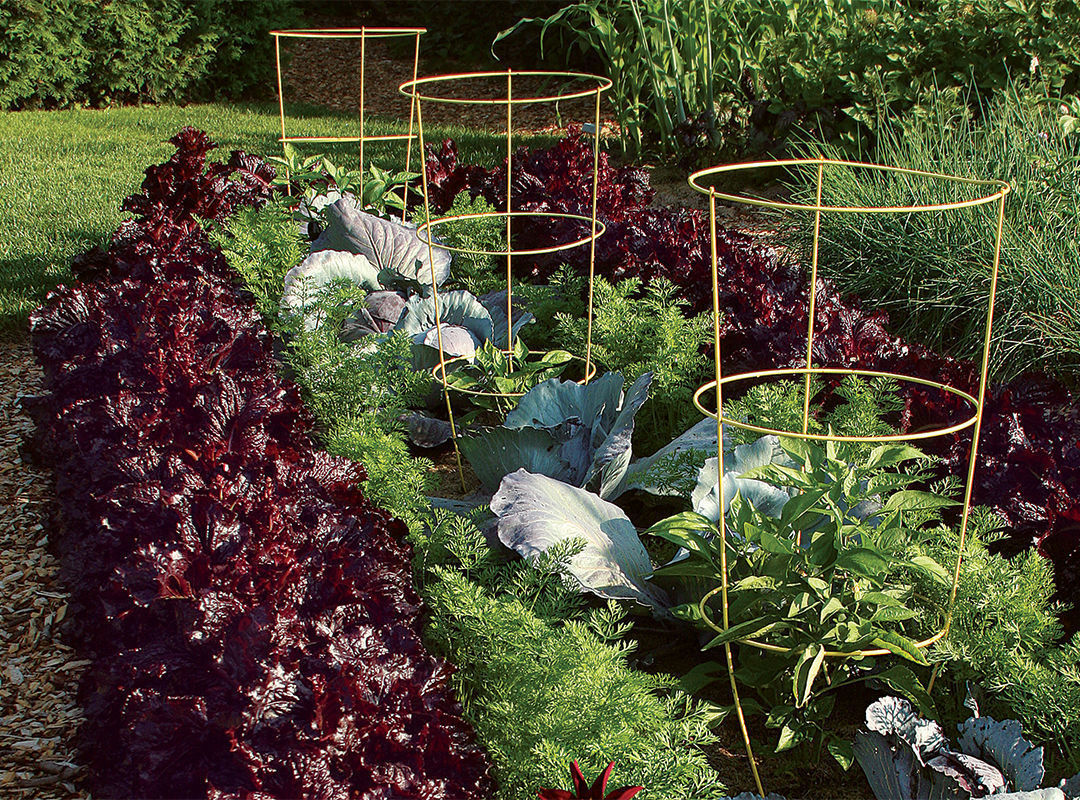 The tenders of this garden don’t plant their crops in uniform blocks. They, instead, plant several crops in patterns within a bed, which creates a stunning visual contrast. And as one crop wanes, the remaining crops take up the aesthetic slack. In this bed, as the dramatic red lettuce is harvested and eventually removed, the carrots will take on the role of a more understated edger, while the blue cabbages will get bigger and command more attention. Pepper plants supported by colorful cages add even more flair. 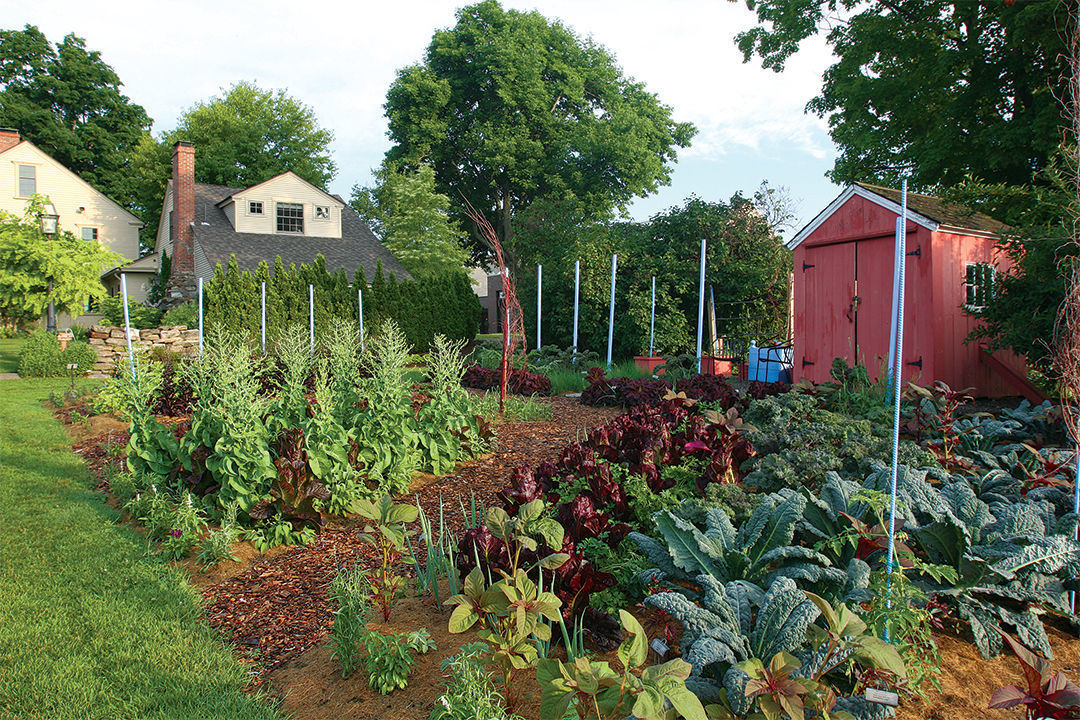 The main path is a wide expanse of lush, inviting turf that establishes continuity between the vegetable garden and the ornamental garden beyond. The vegetable garden’s narrower, secondary paths are mulched, which cuts down on weekly maintenance and makes for a noticeable visual and tactile contrast. 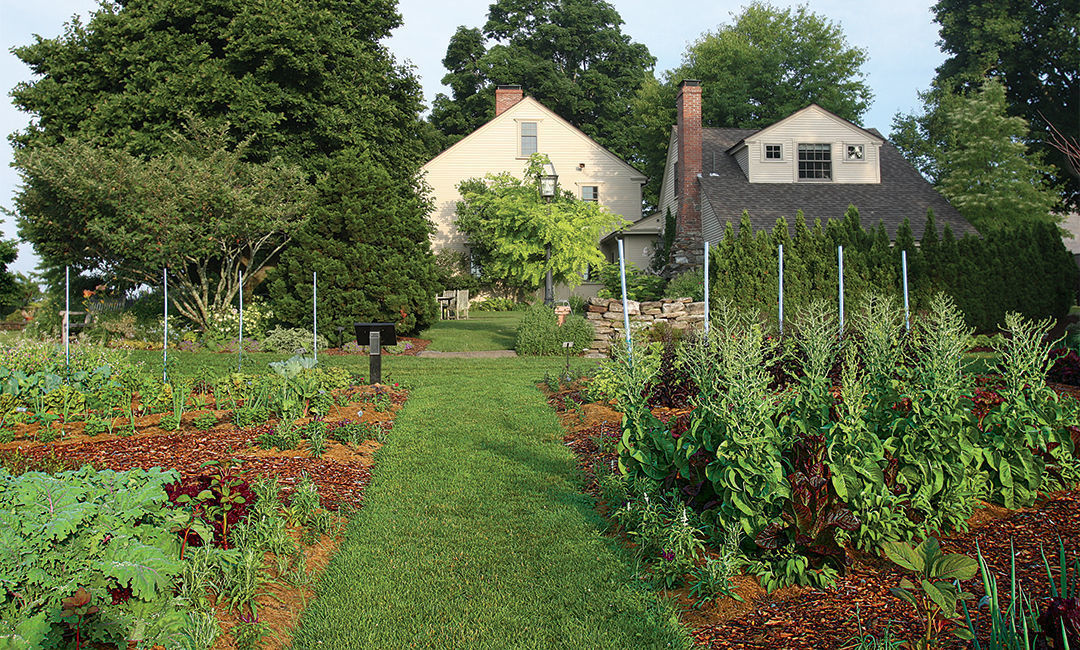 This garden is not book-matched along the main path. The paths are, instead, staggered and the sizes and shapes of the beds differ widely from the north (right in photo) to the south (left in photo), allowing for the larger crops in the northernmost beds and along the eastern border to form a visual backdrop. Both features encourage meandering rather than walking straight down rows of beds that are uniformly spaced and shaped.

The garden sports a new color scheme each year: chartreuse in 2013, for example, and pale blue and burgundy in 2014. The color scheme begins with the hardscaping, but similarly hued plants reinforce it and contrasting plants make it come alive. Here, the chartreuse tripods and hoop archway mimic the chartreuse bloom spikes of a green-leaved basil (Ocimum basilicum cv., annual), while spiky burgundy okra pods and vivid orange zinnias (Zinnia cvs., annual) offer a striking contrast. 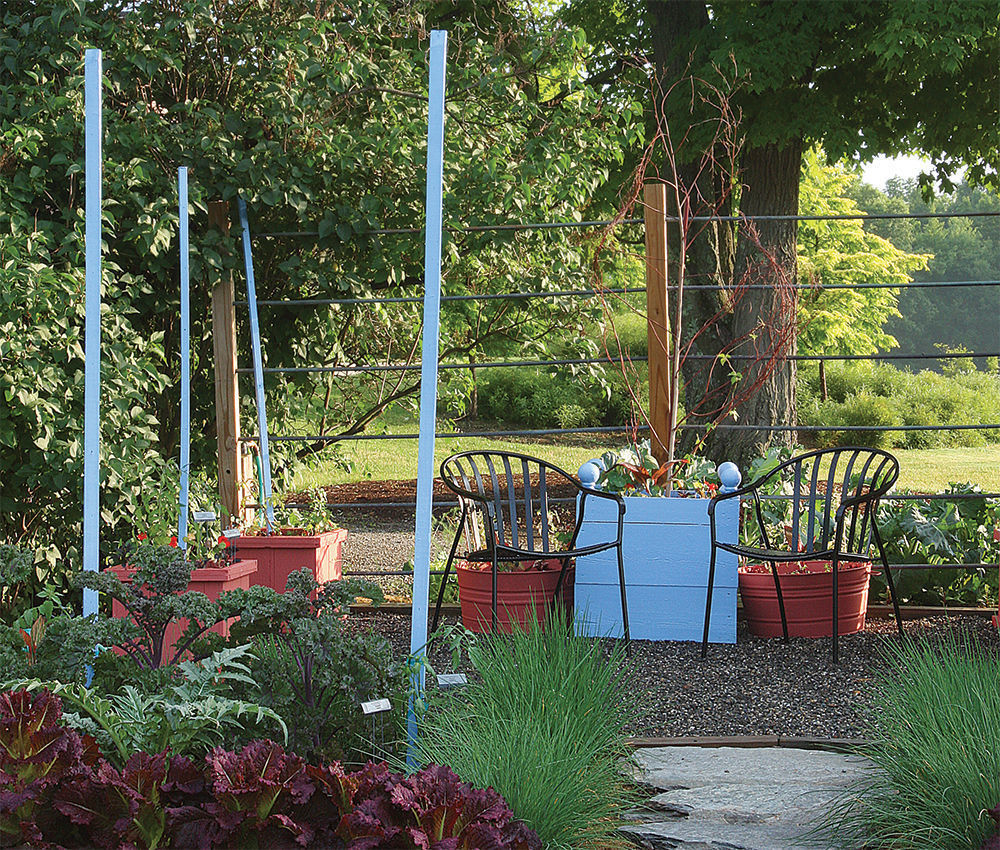 Every garden benefits from a place to sit, rest, and contemplate one’s efforts—and a vegetable garden is no different. This cozy little seating area doubles as a casual work station, where one can shell peas or just watch the garden grow. The planter box by the chairs is painted the same color as the plant supports nearby, making the connection between the garden and the seating area obvious.

A Simple Ladder Trellis for Vines

Tower Hill horticulturists Dawn Davies and Bill Mack came up with this simple, ingenious design for a colorful, customizable trellis. Paint it yearly for a change of scenery, and fold it up for easy winter storage. All it takes is a quick trip to the hardware store for boards, screws, a hinge, and paint. Here’s how to make it: 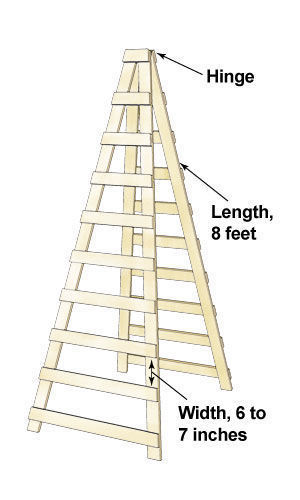 1. Form an open-ended triangle by positioning two 8-foot-long 1x3s on a flat surface so that they meet at the top and their outer edges are 3 feet apart at the bottom.

2. Lay a section of 1×3 across the top, and trace it with a pencil to mark where you’ll cut it so that it’s flush with the top of the triangle’s outer edges. Cut the piece, and attach it with two 1¼-inch-long deck screws on each side.

3. Measure and mark a 6- to 7-inch-wide space between the first horizontal piece and where the second rung will go before laying another board across, tracing it, cutting it, and attaching it with screws.

4. Repeat until you have no more room for another evenly spaced horizontal rung.

5. Cut the bottoms of the 8-foot-long sides so that they are parallel to the rungs and will sit flush to the ground.

6. Make another identical ladder, and attach the two at the top with a 3-inch-long galvanized hinge.

7. Paint the ladder trellis in a fun, vibrant color.

Michelle Gervais is a senior editor.