Ideas to Spruce Up Your Shade

Two of the ways gardens often come together are by trial and error and by chance. If you ask Barbara Weissman about the garden she and her husband, Fred, have created on Bainbridge Island, Washington, you will hear things like “That happened by accident,” or that a certain plant “just spread over there.” Many plants have been moved from spots where they weren’t working to places where they have potential to shine.

This should give the rest of us hope. The ability to put together plants as Barbara does is within our grasp. If we can learn when to change things and when to leave them alone—and find the courage both steps require—then we can move our gardens closer to the beauty that is in Barbara’s garden. Here is a look at some of what she has created and some suggestions for what we can learn from it. 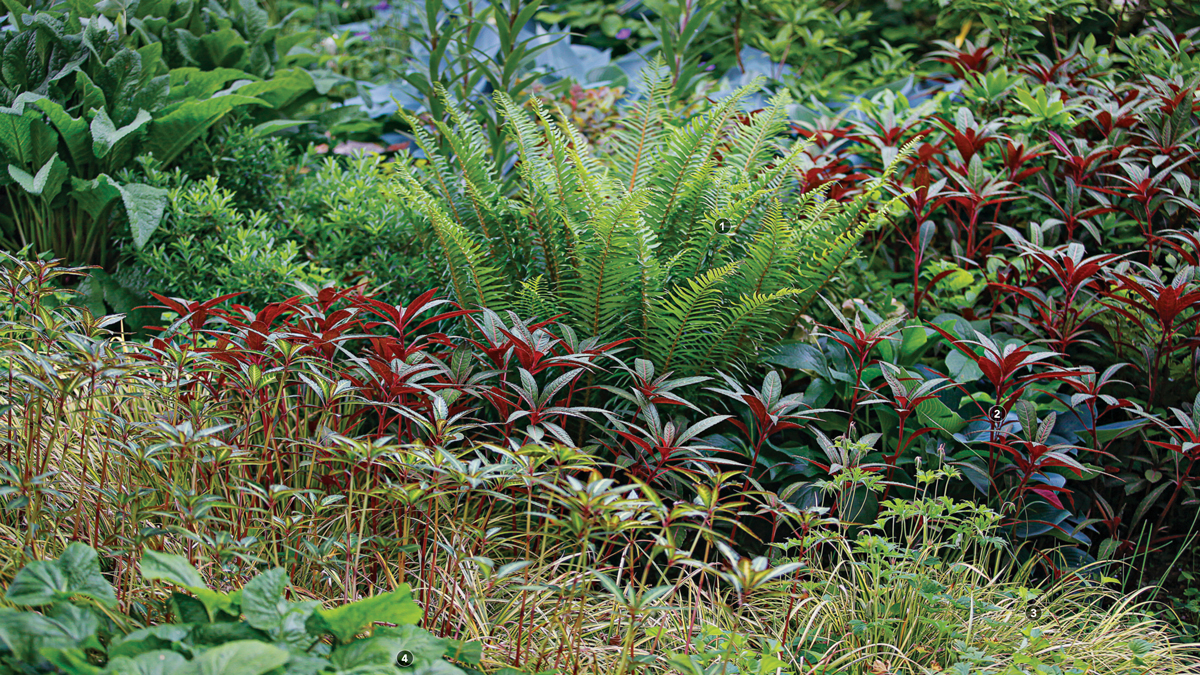 Color in the shade is usually hues of green with dots of white and yellow. A plant like ‘Silver Pink’ hardy impatiens, with its red tones, is a welcome addition. It is perfect for massing, because the red is muted and moody, so it won’t be overwhelming. But it is easy for the eye to scan quickly over a group of the same plant. Providing exclamation points, as with this Western sword fern, turns a clump into a composition. 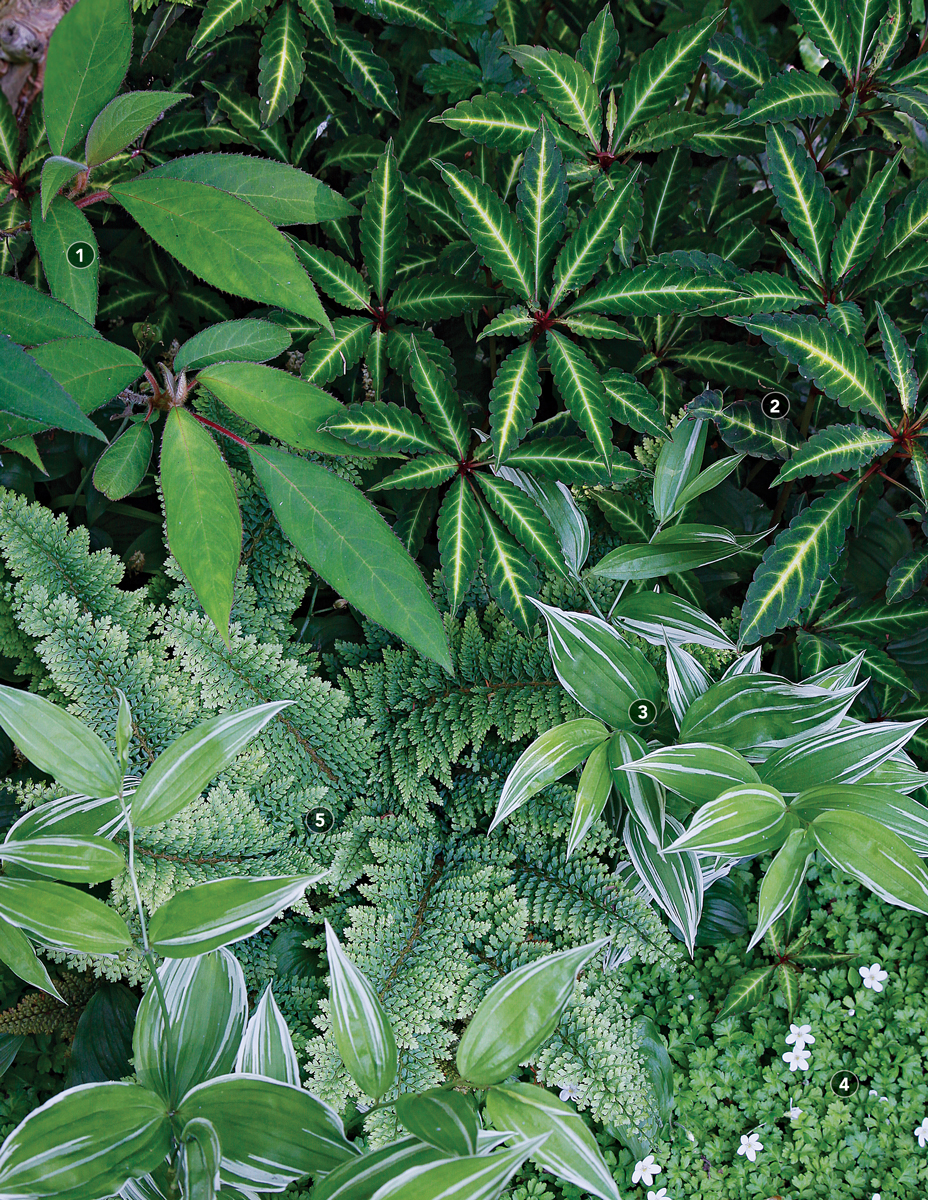 A good combination contains elements of harmony and contrast. Harmony holds everything together, while contrast cre- ates interest. The harmony here comes from the foliage. All the leaves are lance shaped and in shades of green. Yet no two are alike: yellow variegation, white variegation, and plain green. And while the fern isn’t technically lance-shaped, it is long and tapered at the end. The ellisiophyllum is of a completely different shape, but it shares harmonious colors.

“The fairy bells have been creeping around this part of the garden,” Barbara says. “They often make things look wonderful. When they don’t, I pull them out. The impatiens makes nice ragged patches that blend with other plantings. Ellisiophyllum is a lovely ground cover, a low mat with nice texture and white flowers that spreads enthusiastically but not aggressively—although it does need to be trimmed back from the path.” 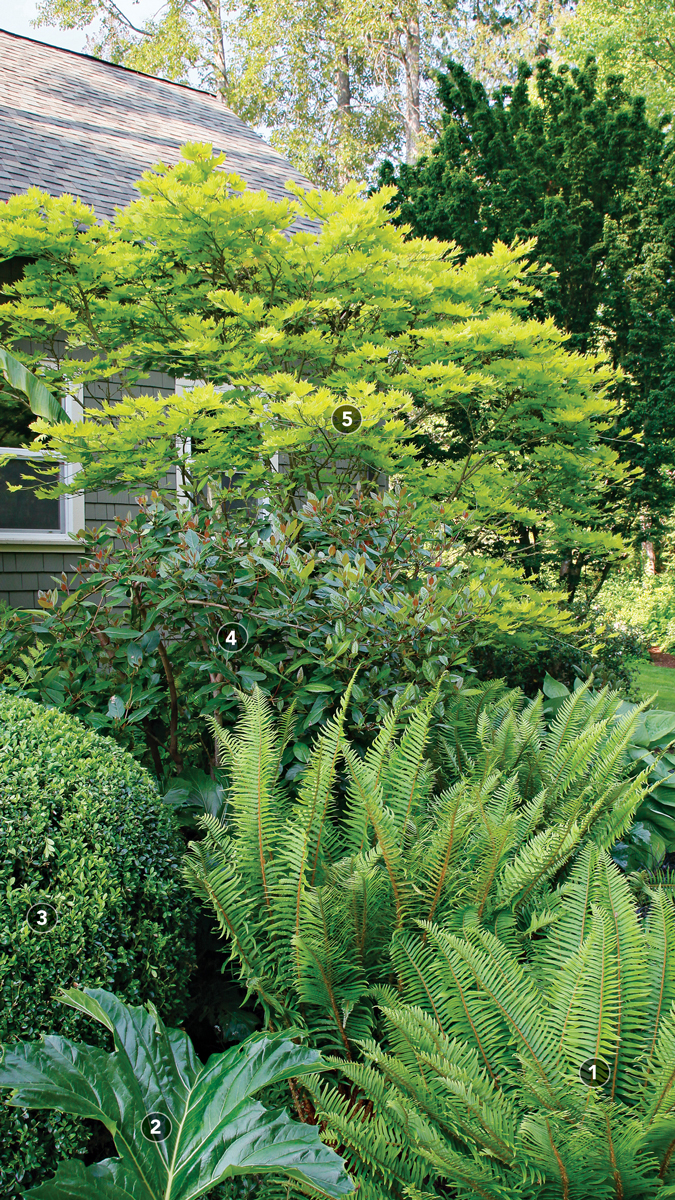 Anyone who gardens in the shade knows that green comes in many hues. The easiest way to group them is as either light or dark. Light greens are just that: light, adding an airy feeling to an area. Dark greens are heavy and provide a moody counterpoint among lighter tones.

The lightest green here is the full moon maple floating above the plant- ing. Adding some visual weight is the laurustinus, which, Barbara admits, “probably shouldn’t have been planted there; I keep having to prune it to keep it from growing up into the maple.” The bear’s breeches does the same job for the fluffy ferns and boxwood. The commonality of these shades of green is what ultimately unites this bed of strong shapes and habits. 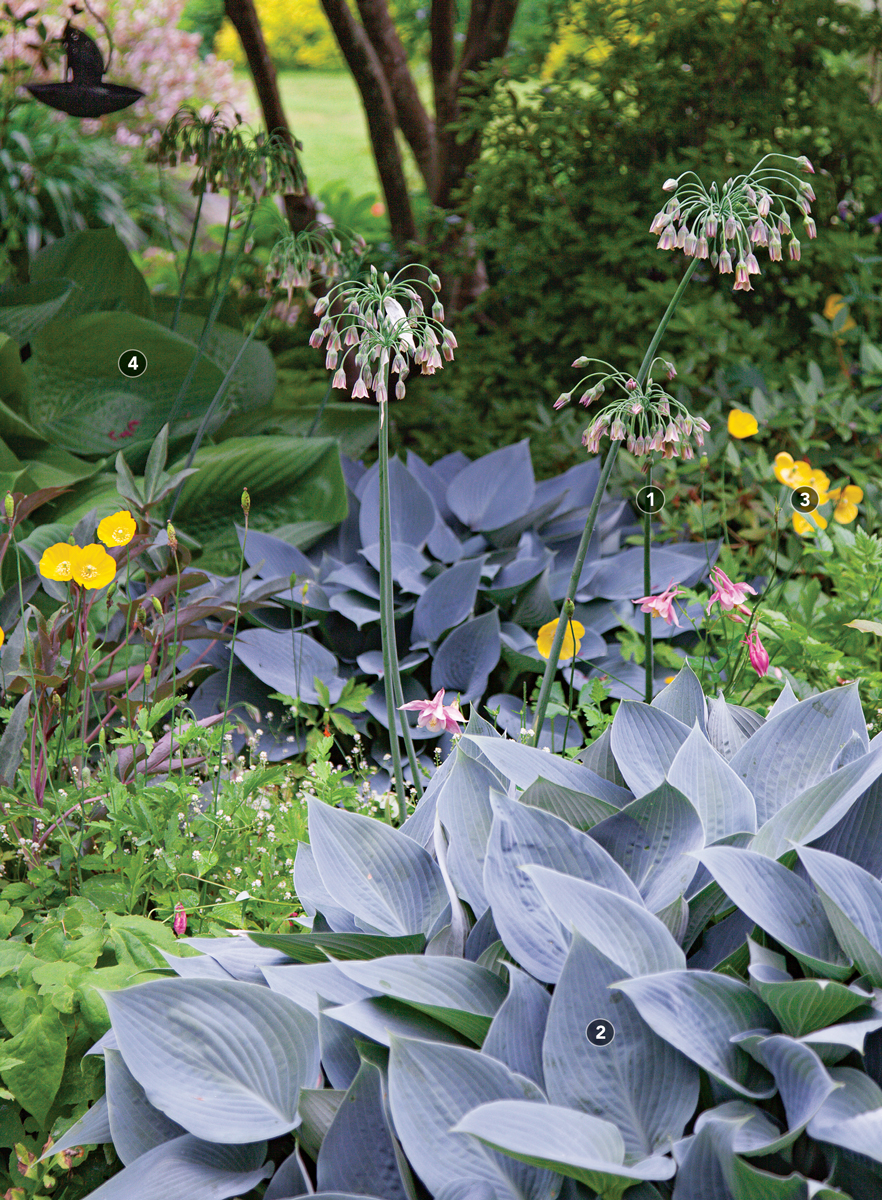 “I keep throwing things at this bed,” Barbara says, “hoping it will all come together somehow, someday.” Her approach is working. The repetition and mass of the hostas adds order to the area. And self-sowers such as the Welsh poppies, which, according to Barbara, “show up when and where they like,” add an air of lightness and freedom. While these two elements balance and complement each other, the Bulgarian honey garlic draws attention to and into the area. 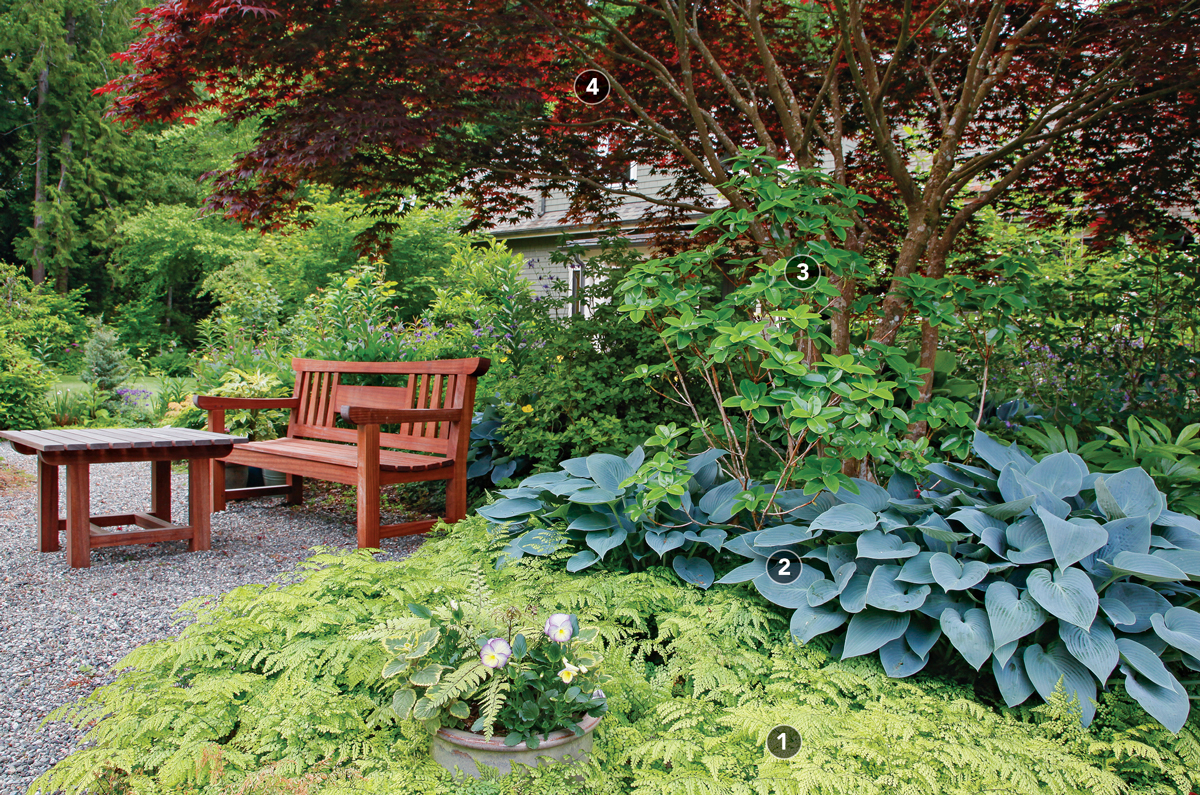 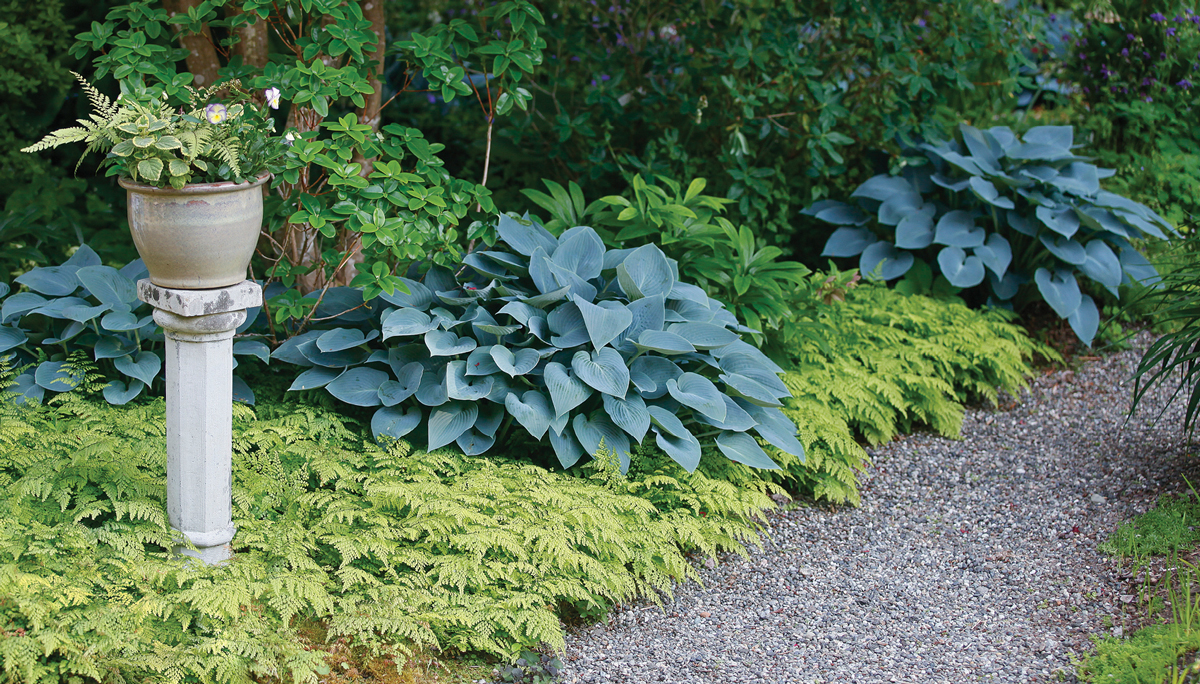 Shady spots are perfect for seating areas. Not only are you out of the heat of the sun, but there is a feeling of protection under the canopy of a tree. The key to incorporating a tree into a design is layering, which helps the eye move seamlessly from the tree to the ground and back up again. This rhododendron takes the first step in bringing the eye down where it mingles with the hosta. The eye then travels to the ground plane occupied by the fern.

One of the best lessons we can learn from Barbara is that when we see something isn’t really working for us, we can try something different. When Barbara thought the planting in the pot was getting a bit lost among the ferns, she tried raising it up on a pedestal; she was very pleased with the result. Now the area has a clear focal point, and the planter helps cover the middle ground between the tree and the lower plants. 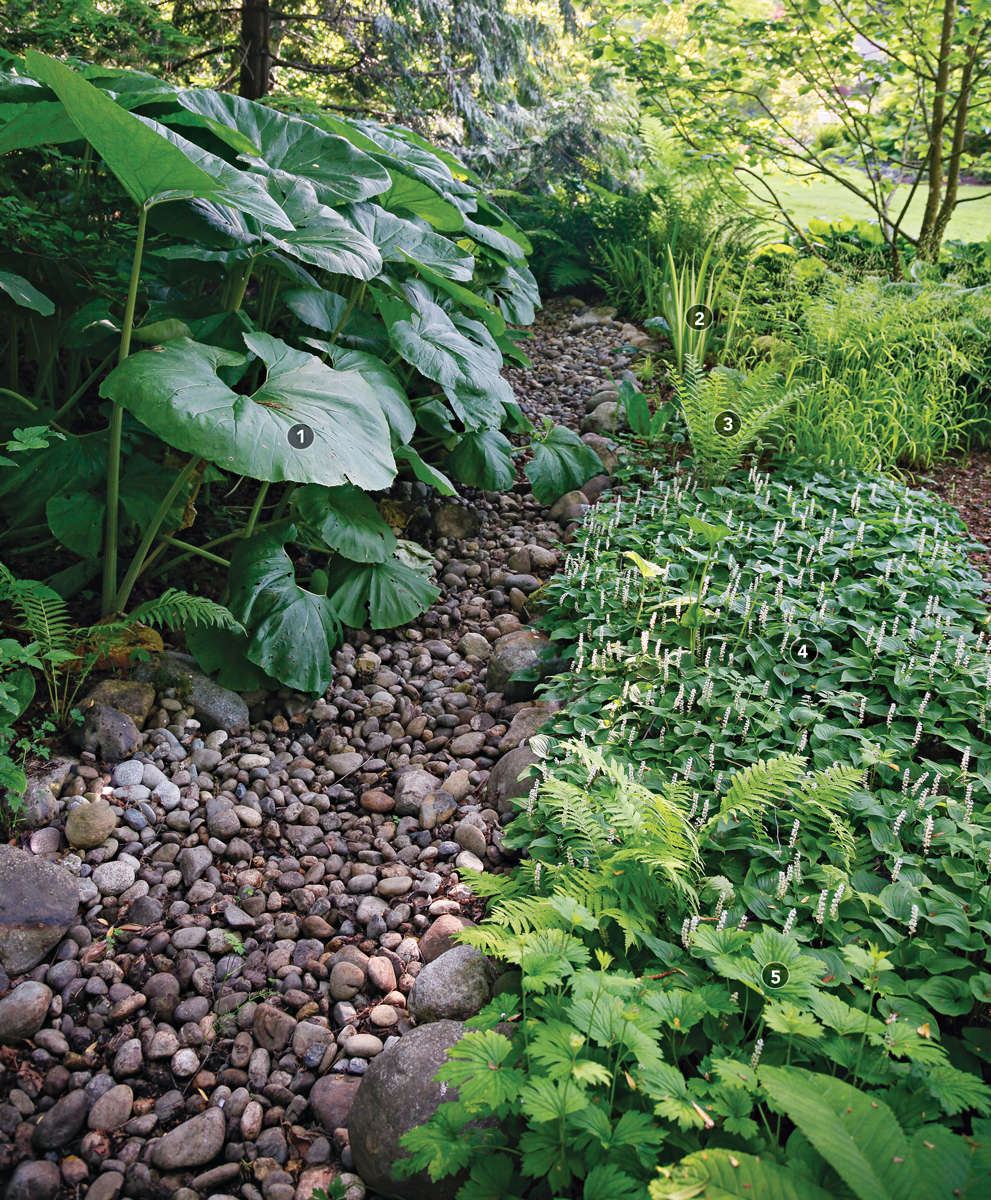 Looking down the length of this winter stream bed shows two distinct beds. In one are the small-leaved brighter green plants whose intricacies are better seen thanks to the large, dark leaves of the giant butterbur on the other side of the stream. These beds, however, are viewed from a path just to the right of the photo. From that view, they appear as one composition, with fine texture in the front highlighted by the bold foliage behind. 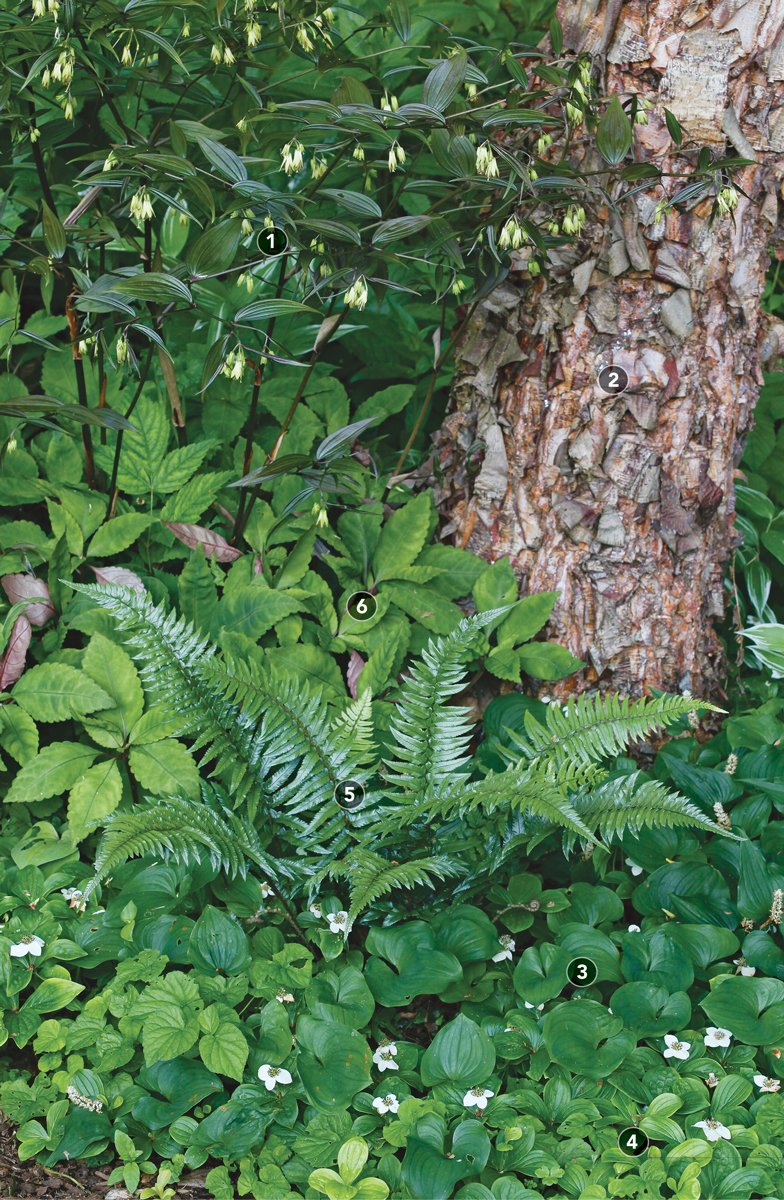 Not everything needs to be bright

While Barbara credits chance with creating many of her combinations, this one was all her. She explains how she did it: “I planted the ‘Night Heron’ fairy bells to pick up the dark colors in the river birch bark. I knew the impatiens would combine nicely with ‘Night Heron’ because it also has dark stems, as well as a purply underside to the leaves. The fern was necessary to provide a different texture, and I chose a shiny one because it’s kind of a dark corner. The maianthemum just crept in, but it looks like it belongs.”

Steve Aitken is the editor.