Few perennials are as flamboyant as hibiscus. Their flowers can be up to 10 inches wide or larger, which is inconceivable for something that’s not tropical. Hibiscuses have been in gardens for a long time, but with all the recent enhancements in flower colors and sizes, foliage shapes and hues, and compact habits, they’re not the same as grandma’s plants anymore. Although I think they’re fun and the perfect antidote to fussy landscapes, my impression is that people either love them or hate them. The gigantic flowers are exotic and charismatic to some, while others find them too big and garish.

Their size isn’t the only thing that’s not subtle. They put their sex right in your face: The male and female reproductive parts are held on long bottle brushes that protrude from the centers of the flowers with a bright red bull’s-eye marking the base of the column. Many older selections are more plant than flower, but newer cultivars have been bred to be indeterminate. The result is more flowers from tip to toe and a longer bloom period, which is the case with the following favorites from our trial.

Duration: A minimum of four years.

Care: We provided minimal care, allowing the plants to thrive or fail under natural conditions.

Hibiscus At a Glance

Bloom time: Mid- to late summer through early to midfall

Propagation: From cuttings off new growth, from seeds, or by division in spring

Maintenance: A late-spring pinching can force plants to have a bushier habit 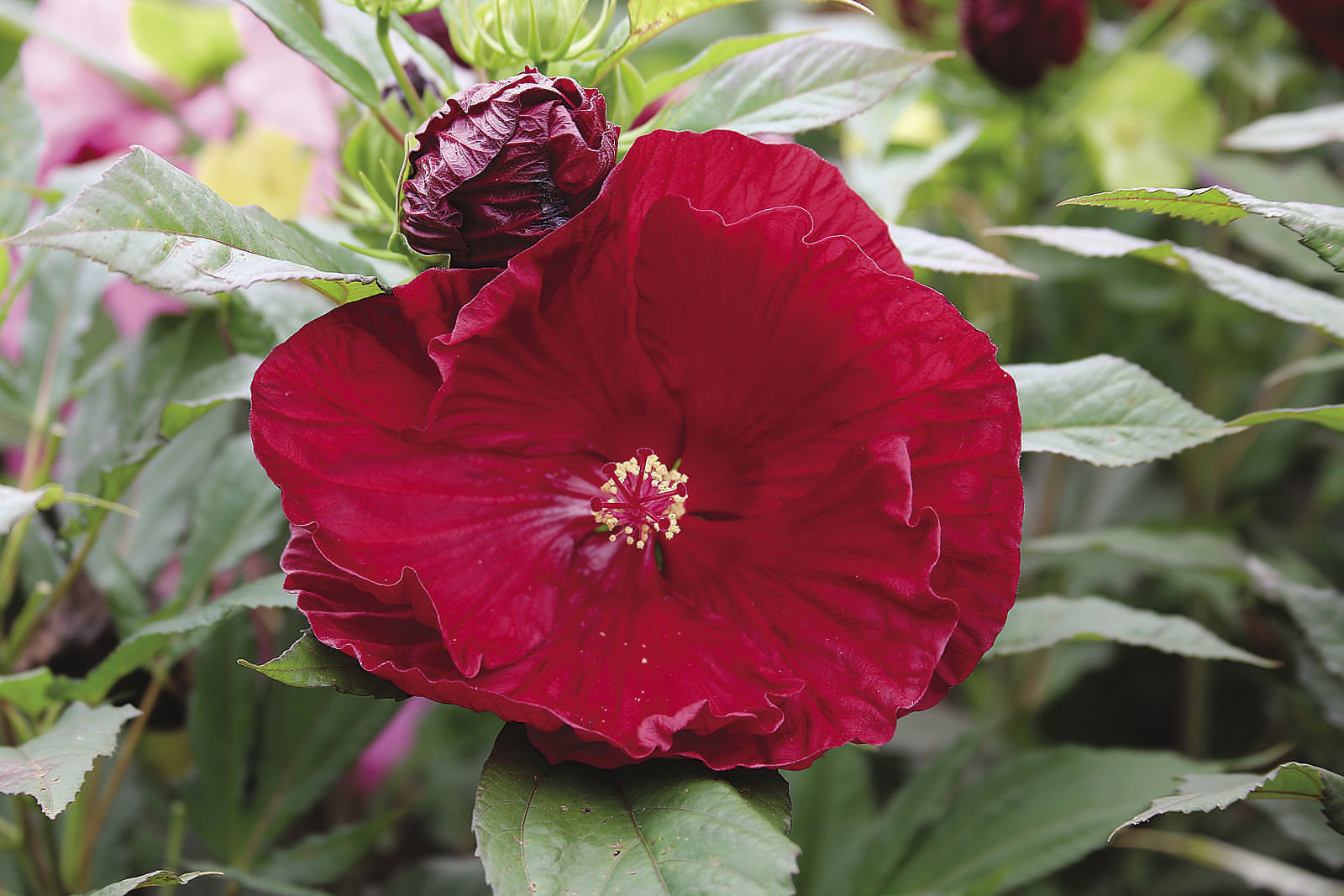 When ‘Cranberry Crush’ bloomed for the first time, I was immediately captivated by the boldness of its deep scarlet-red flowers—the color is so intense that the red eye is barely discernible at the center of the slightly cupped petals. Equally fun are the nearly black flower buds that swell like balloons before opening. The maplelike leaves start a shiny deep bronze but turn dark green with purple overtones later in the season. ‘Cranberry Crush’ received high marks for its great flower show, dense rounded habit, and reliability, but to be honest, the vivid flowers could be plunked on a stick and I’d still be crazy about this plant. 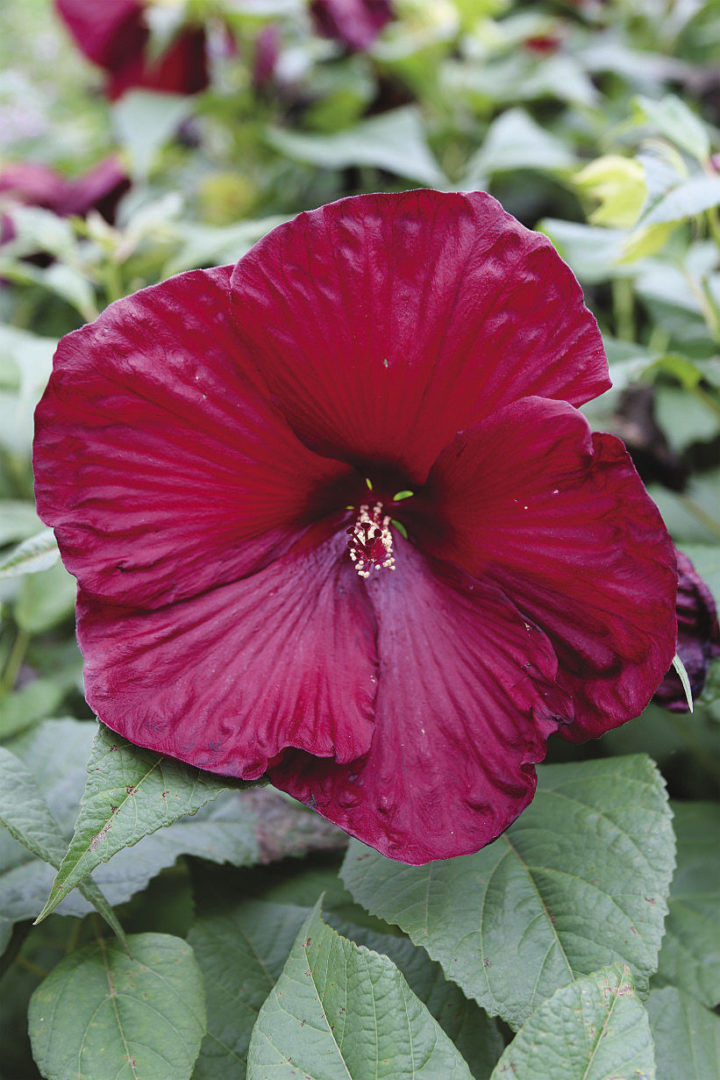 Objectivity is key to a fair trial, but it’s too easy to have favorites. Right now, it’s ‘Heartthrob’. The deep blood-red flowers with darker black-red eyes are irrepressibly seductive, while the whopping 9-inch flowers only heighten the allure. The oval-shaped leaves and stems are green at all times—it’s like there was no more color to spare! ‘Heartthrob’ makes a neat, compact bush about as tall as wide, which you’ll appreciate all summer but probably won’t give much thought to once the flowers pop. 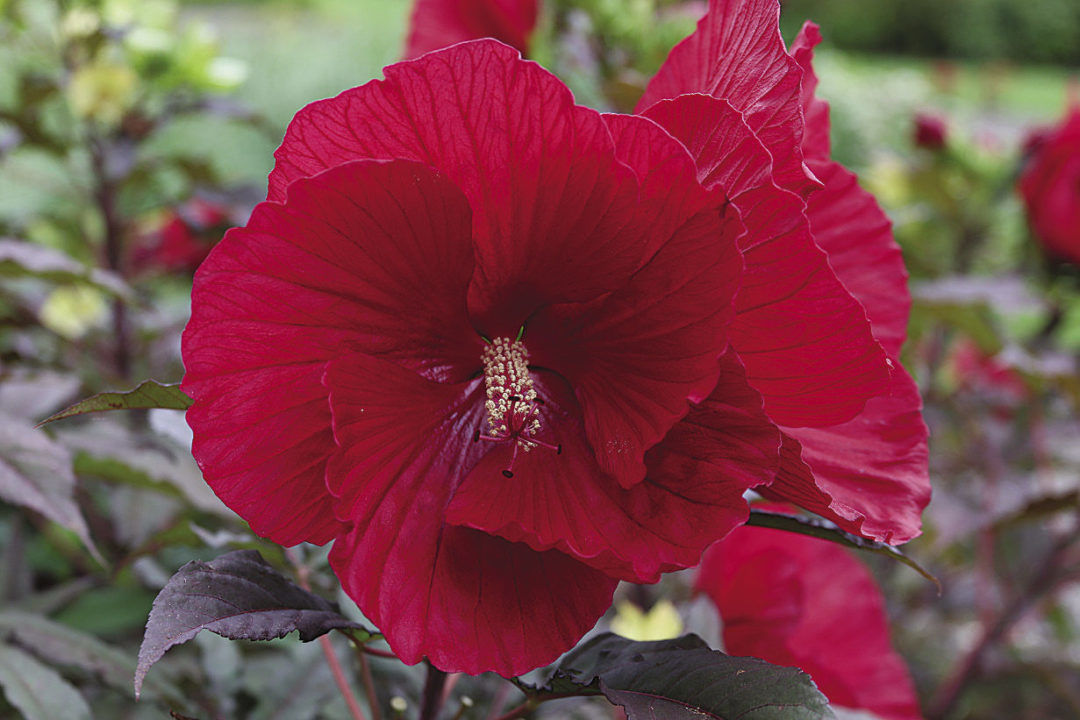 With voluptuous scarlet-red flowers, dark burgundy foliage, and a robust rounded habit, ‘Midnight Marvel’ might just have it all. Its slightly cupped flowers are as vibrant as ‘Cranberry Crush’, while the maplelike leaves are darkly brooding. ‘Midnight Marvel’ holds its leaf color for most of the season but dims to bronze-purple in midsummer and is half green by early fall. I find the touch of yellowish green at the base of the leaves quite fetching but wish ‘Midnight Marvel’ also had the striking yellow-green terminal leaves of the cultivar ‘Summer Storm’. Like so many of the new selections, ‘Midnight Marvel’ is very long blooming and handsome at every stage. 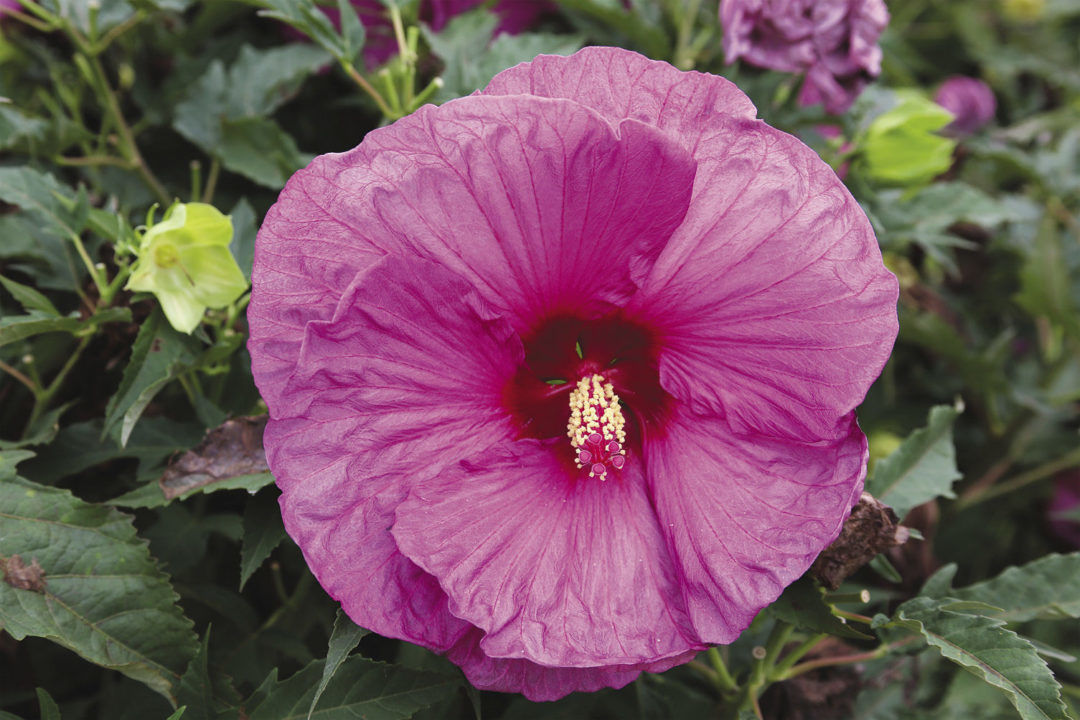 ‘Berrylicious’—I love when a clever name is paired with a terrific plant. The pretty mauve-lavender flowers are a departure from the usual hibiscus color palette and are bountiful for nearly three months. Bright green maplelike leaves make the perfect backdrop for the 8-inch ruffled flowers, which bloom on all sides of the bushy plant. At 50 inches tall, ‘Berrylicious’ isn’t exactly small but lands somewhere between short and tall, for a hibiscus anyway. ‘Berrylicious’ is a perennial favorite of visitors to the Chicago Botanic Garden and has been one of the most consistently strong performers. 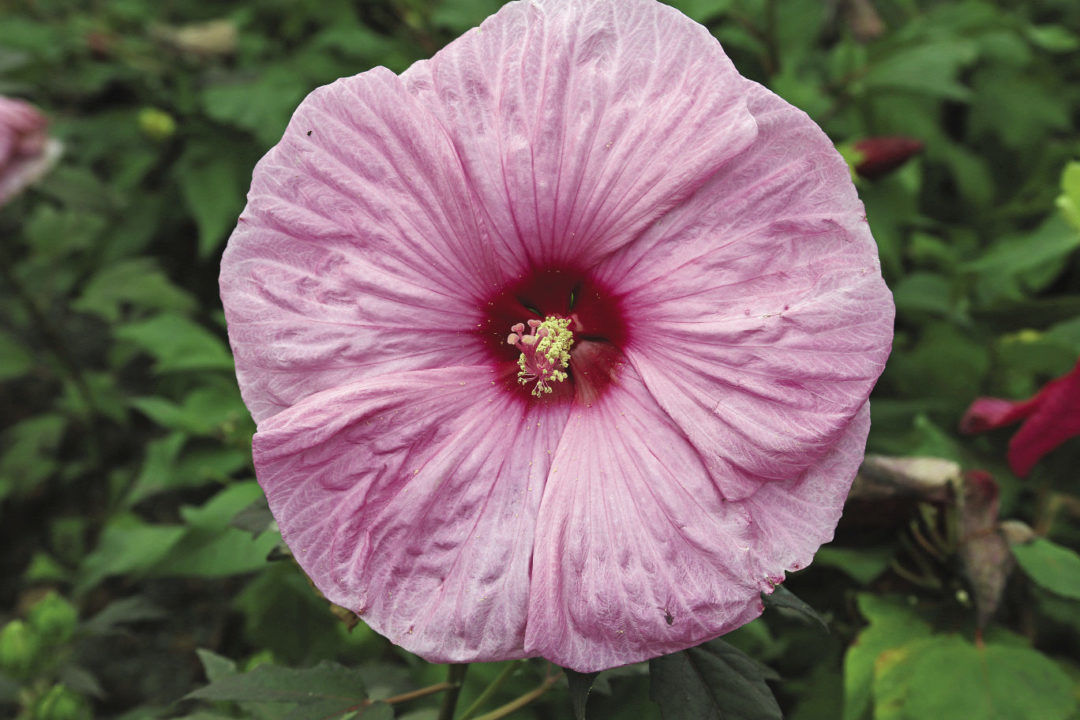 ‘Super Rose’ was one of the stars of our first trial way back in the early ’90s (somewhere, there’s an awkward photograph of a flower stuck behind my ear for size comparison). The vibrant rosy pink flowers with darker pink veins are bountiful for more than two months; ‘Super Rose’ held the title for being the most floriferous cultivar in that trial. And at nearly 5 feet tall, the flowers are borne up high where they can’t be missed—if it’s even possible to overlook a 9-inch-wide flower! Unlike newer cultivars, ‘Super Rose’ bloomed at the tips of the stems only.

I would be over the moon about ‘Party Favor’ even if it never bloomed. The green, deeply dissected maplelike leaves are wonderfully textural and all the more striking against the red stems. The large scale of the plant—more than 4 feet tall and 5 feet wide—doesn’t seem as imposing due to the refined quality of the foliage. You can enjoy the foliage show for a long time because ‘Party Favor’ begins blooming later than most cultivars and keeps flowering nearly to frost. The enormous blossoms have bright pink petals irregularly streaked with red and dotted with a red eye. The flowers may come late but are always plentiful. 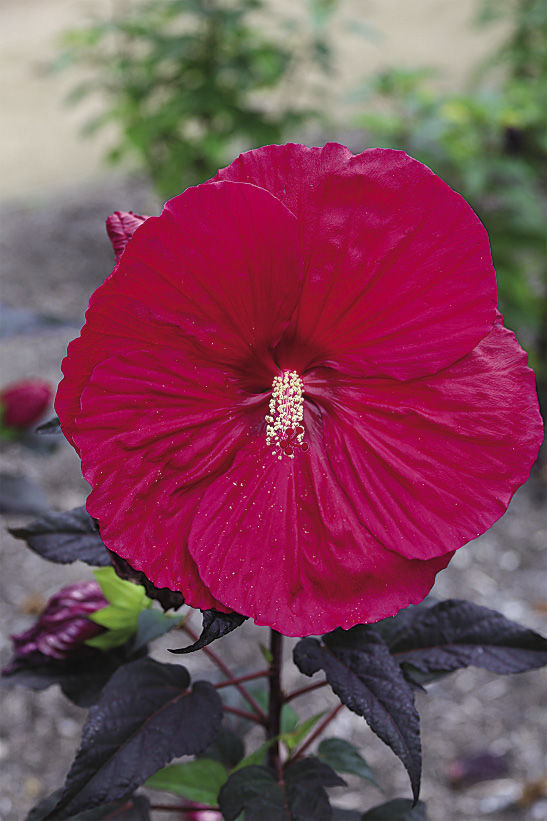 1. The magenta-red flowers of ‘Mars Madness’ may well be a nod to the red planet itself—their vibrancy is certainly unlike any of the other red-flowered cultivars we grew. Each lovely blossom is 6 to 8 inches wide with broad overlapping petals, but you’ll have to look closely to see the slightly darker red eye. The large maplelike leaves are distinctly burgundy in spring, fading to dark coppery green in summer. And there’s plenty of time to enjoy the handsome foliage because ‘Mars Madness’ begins blooming in late summer. It’s a bushy plant—3 feet tall last year—but we expect it to reach 4 feet tall and at least 6 feet wide over time. 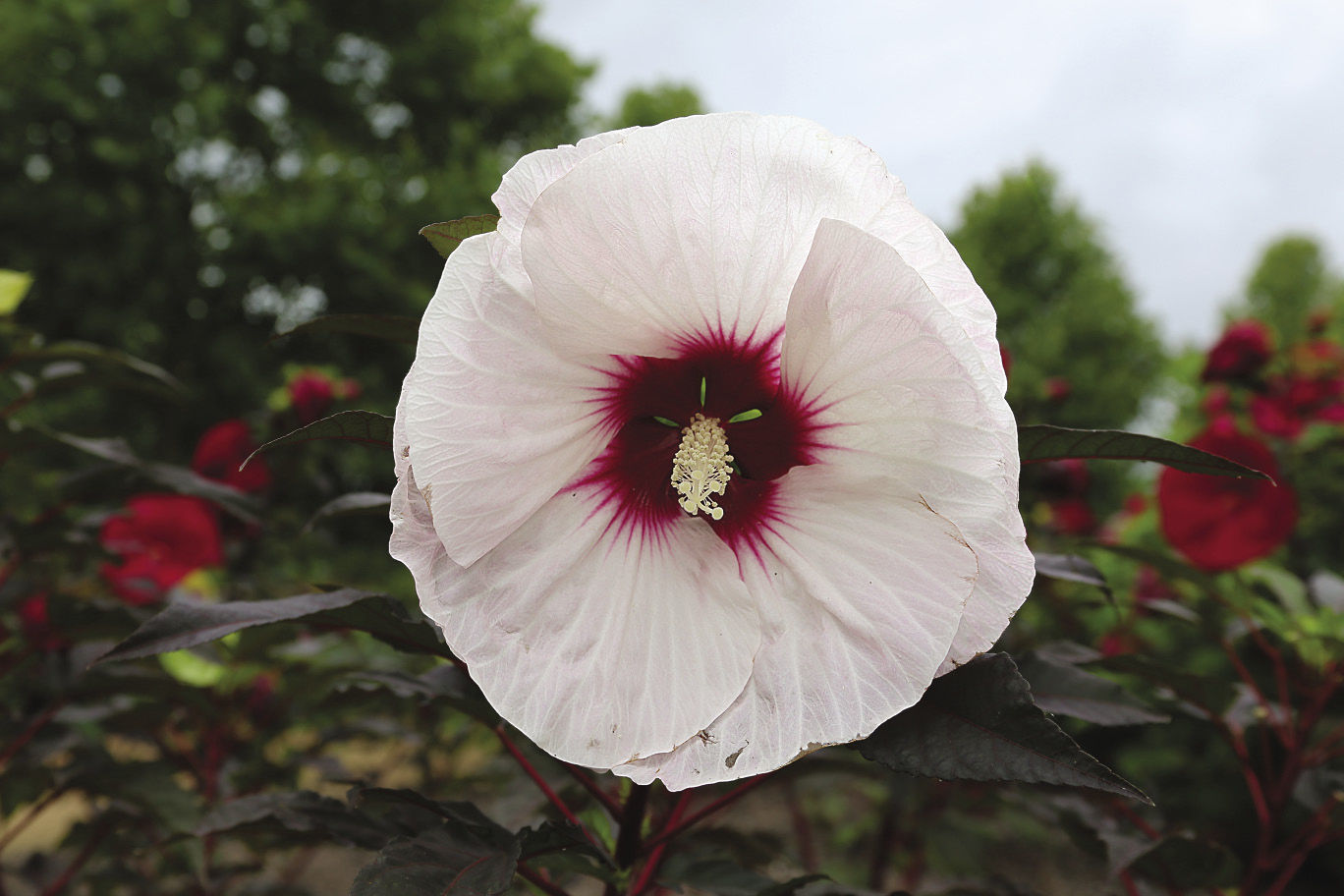 2. ‘Mocha Moon’ shares a passing resemblance in leaf color and shape to ‘Mars Madness’, but its maplelike leaves are more bronze than burgundy. And that’s where the similarities end. Pure white flowers—to 8 inches wide—feature bright red eyes that bleed vividly into the overlapping petals. In midsummer, the combination of the luminous white flowers and bronze leaves is distinctive and eye-catching. ‘Mocha Moon’ has a compact, bushy habit of 4 feet tall and wide. 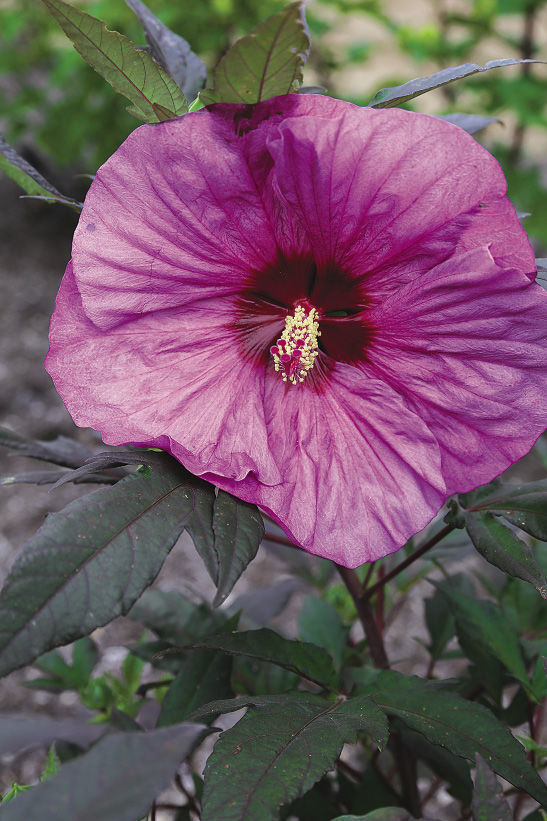 3. ‘Berry Awesome’ has been in the trial for just two years but has had a good run so far. The lavender-pink flowers with dark red eyes are pretty and plentiful. At 7 inches wide, the flowers are at the lower end of the size range but are produced for a long time. The dark green maplelike leaves start out bronzy purple and hold some color all summer. ‘Berry Awesome’ has a compact habit of 4 feet tall and wide with nice red stems. The smaller plant size fits well in a variety of gardens. 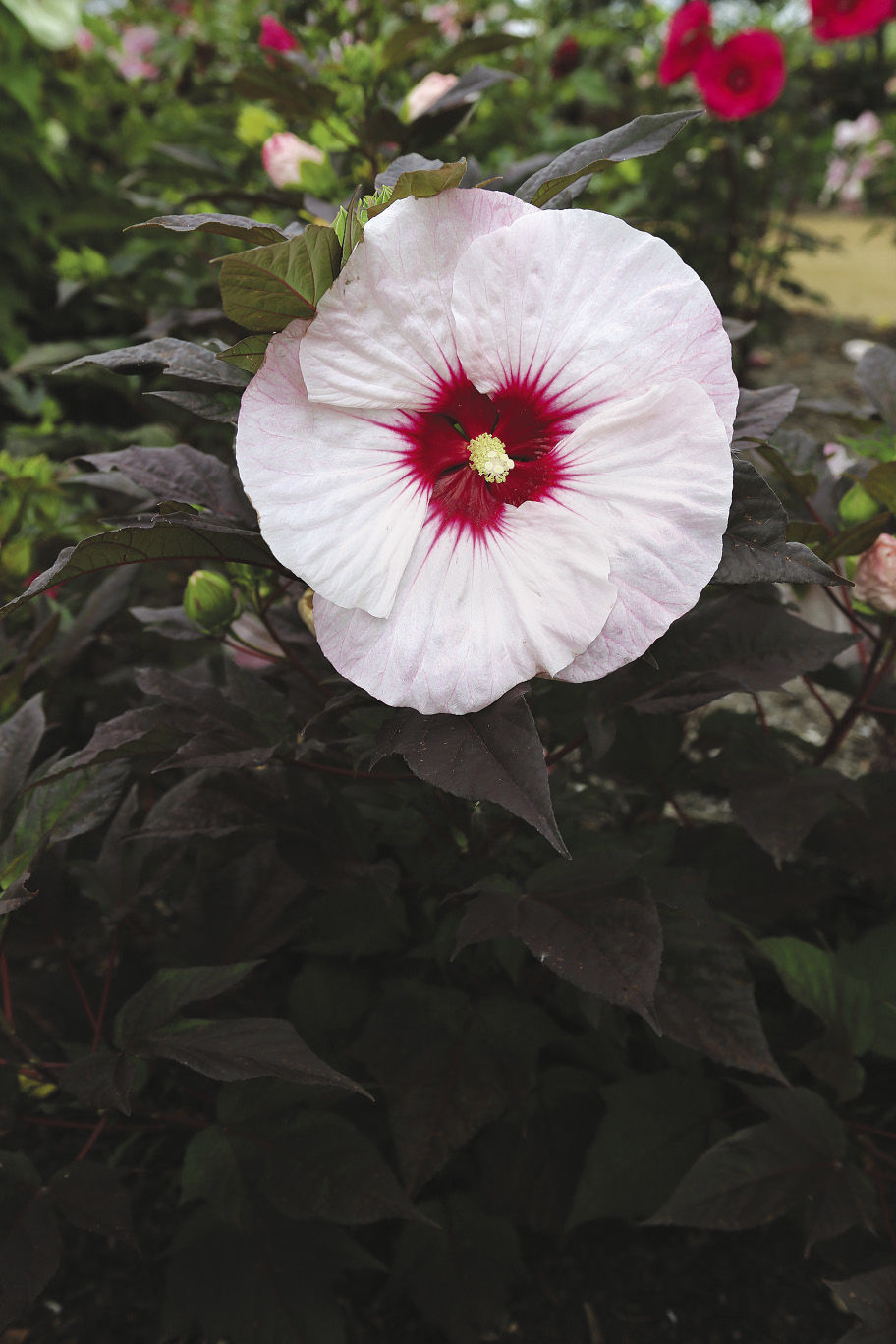 4. ‘Perfect Storm’ was on my radar from the very start. Its dark burgundy leaves—a mix of maplelike and oval shapes—are exceptionally colorful. The flowers look pink from a distance but are actually white with a pink blush and sport an especially large bright red eye. So far, the flowers have been just shy of 6 inches but should get to be 8 inches wide in time. Chartreuse calyces pop against the dark foliage and are notable before and after flowering. At 3 feet tall, ‘Perfect Storm’ is a truly compact hibiscus that will appeal to gardeners who like drama in a smaller package.

Keeping these plants healthy and happy doesn’t take much effort. Rusts, leaf spots, and stem and crown rots can be problems. Here are a few other things to note about their nature. 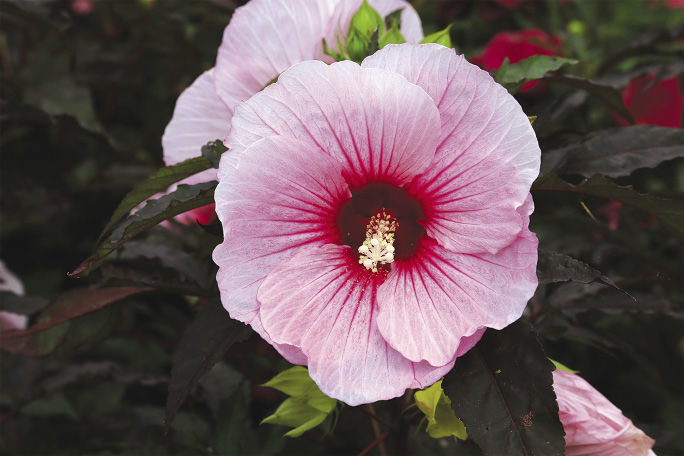 The blooms—either flat or slightly cupped—have broad overlapping petals that may be puckered or ruffled, making them look a bit like crepe paper. The delicate petals are deeply etched with veins, which are sometimes a different color, and the red spot at the center varies in intensity. The flowers are fleeting. Each blooms for only one day, but flowers open in succession over many weeks. 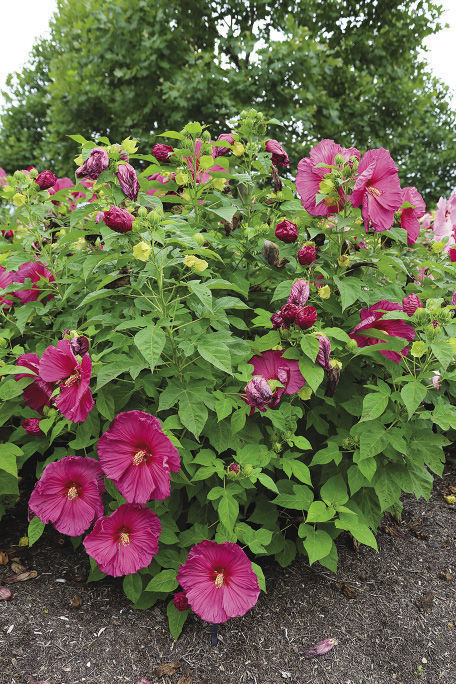 Hibiscuses are bushy plants with shrub like proportions, ranging from a few feet to more than 7 feet tall. Whether taller than wide or as wide as tall, stems are typically strong enough to stay upright no matter the height. 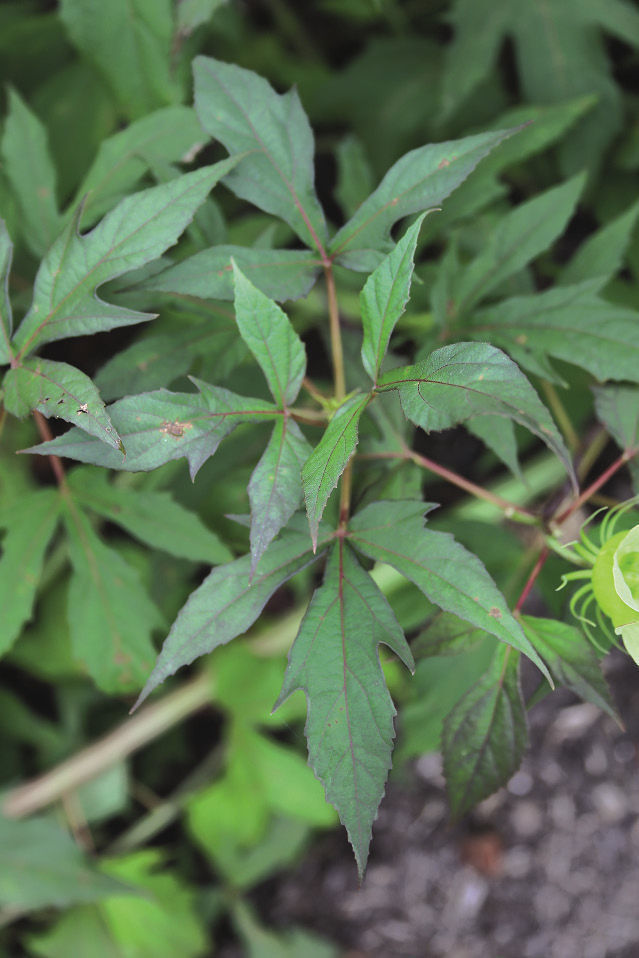 The classic leaf is broadly oval with a few shallow lobes, but many cultivars feature maplelike leaves (photo above), which are strongly lobed to deeply dissected. Leaves can be simply green or blushed with shades of purple, burgundy, or bronze. While these accents may fade quickly, some of the newest cultivars stay deep burgundy or purple all summer long. Leaf margins, veins, and petioles as well as stems often show some red to burgundy, too. 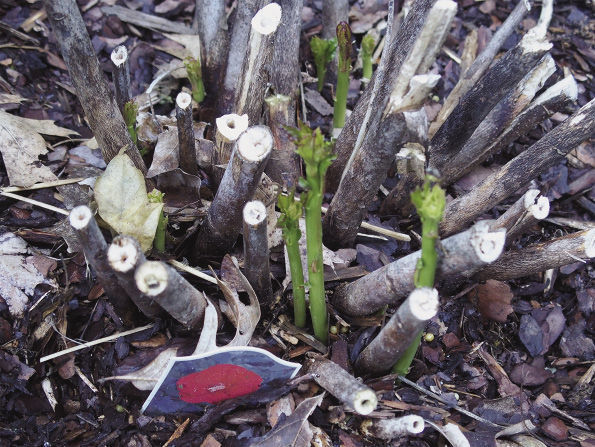 Stems can be cut back in fall or spring; it’s best to leave some stubs to mark their location because hibiscuses emerge pretty late in the spring. 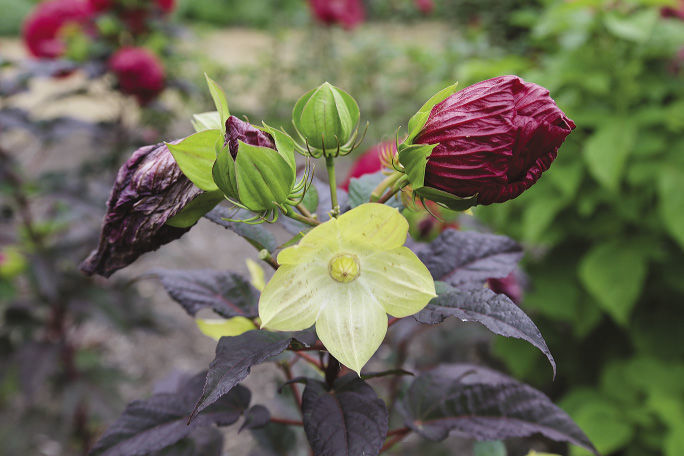 Since each flower lasts for just a day and is so large, deadheading might be crucial for neat freaks. In dry weather, the large flowers fall cleanly from the sometimes chartreuse calyxes. But if the flowers are wet when they drop, they turn mushy and stick to the leaves in an absolutely detestable way. I’ve certainly peeled my share of soggy flower carcasses off the leaves to improve the display. 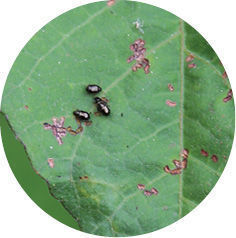 These tiny, shiny black insects can be easily overlooked until you notice little shot holes on the leaves. The damage is a minor cosmetic issue at best, but in severe cases, hungry flea beetles can turn a leaf into a sieve. Interestingly, the shot holes are less noticeable on purple or burgundy foliage than on green-leaved plants. Diatomaceous earth is a nontoxic way to help kill them off. 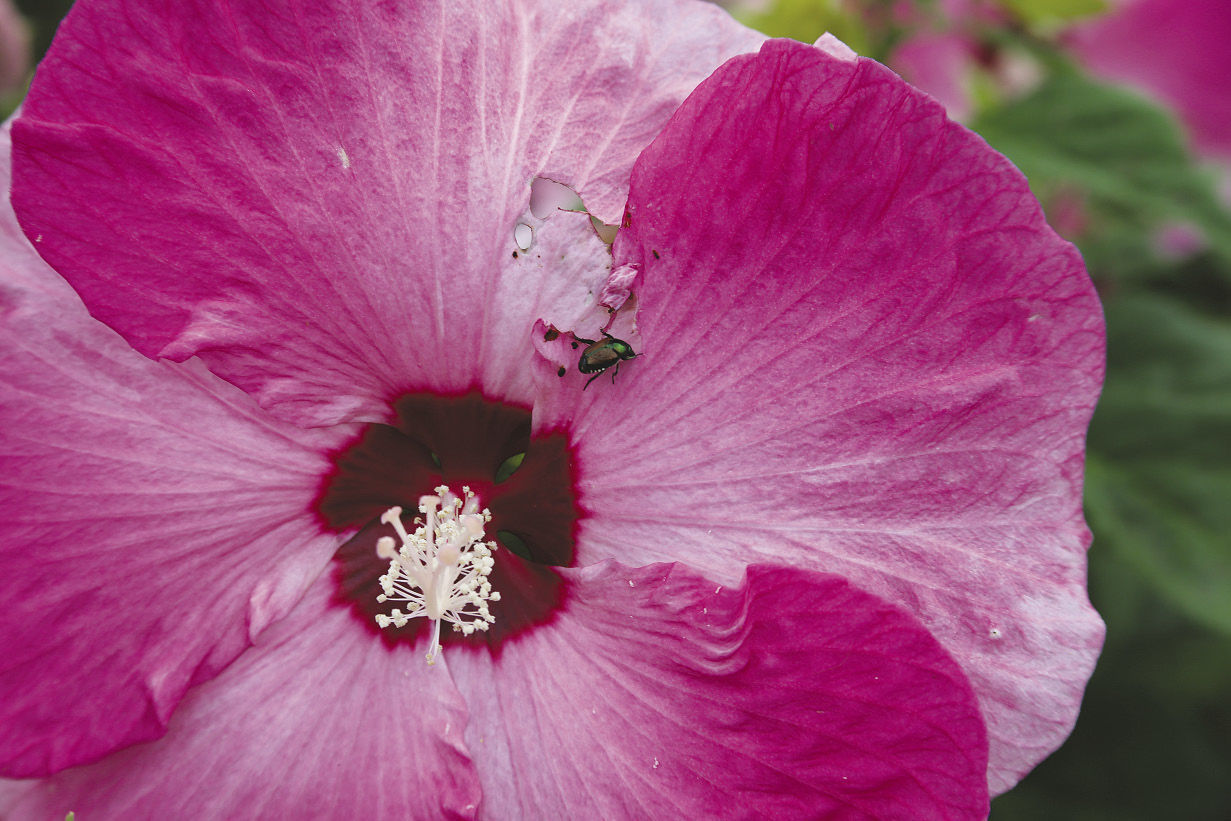 Japanese beetle damage was less prevalent on our hibiscuses, likely because local beetle populations have gone down in recent years. The damage can be considerable due to their voracious appetites, leaving behind skeletonized leaves and flowers. Handpicking is an effective, albeit gross, control option. 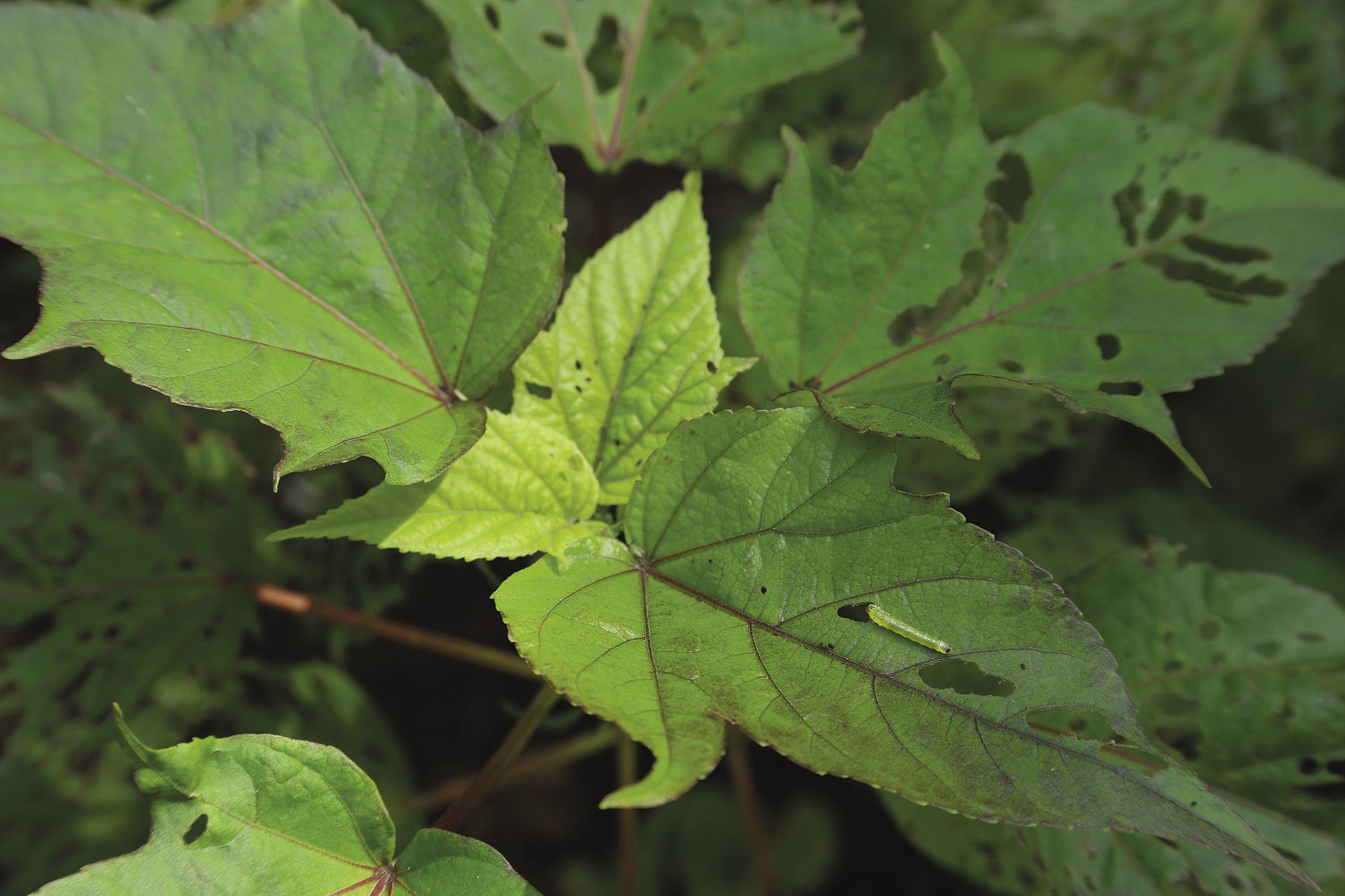 Hibiscus sawfly larvae can be an issue, too, and generally first appear on the underside of the leaf and begin feeding. In a couple of days, these caterpillar-looking creatures will turn the leaves of the hibiscus into skeletonized lace. Organic horticultural oils can help kill off some of the offenders.

There are many things to consider when selecting a herbaceous perennial plant for the garden. Some slots are for sentimental plantings, like a piece of Grandma’s peony from the family…

On hot summer afternoons, we didn’t need much more than the shade of a mimosa tree and a watermelon to stay cool. My grandfather would split one open, spear the…

GPOD on the Road: Earthwise Garden

Today Cherry Ong is taking us along to a garden she visited this spring. I had a serendipitous discovery when we visited Boundary Bay in Tsawassen, British Columbia, in a…