Beyond the Basic Butterfly Bush

Few sights are as quintessentially associated with summer as butterflies perched on the blossoms of butterfly bush (Buddleia spp. and cvs., USDA Hardiness Zones 5–9). While the profusion and prodigious nature of the flower trusses catch our eye, the sweet nectar draws in a bevy of butterflies, bees, and hummingbirds. Although I’m particularly captivated by the deep purple flowers, I’m drawn to all colors and shades of butterfly bush. Whether held upright or gracefully arched, the blossoms are always stunning. The deliciously fragrant flowers bloom from early to midsummer into fall, putting on a show when many plants are done or winding down.

It’s not that butterfly-bush leaves are forgettable, but they do have a lot of competition. Typically gray-green to dark green with a white underside, leaf color can vary greatly among the hybrids, and new variegated cultivars tend to have a little more oomph. For all of their good qualities, butterfly bushes do have their issues. For one, they can be invasive in certain parts of the country. Winter hardiness can be a problem, as well. The following are a few varieties of butterfly bush that, in our trial, proved to be not only gorgeous but also reliable.

Season: Flowers appear in early summer and can last through late fall. Foliage is evergreen in warm zones.

Pests: Don’t be fooled by their drought tolerance. Plants stressed by too much drought will have trouble with spider mites.

Propagation: Butterfly bushes are self-sowers. Due to their vigorous nature, I heartily recommend deadheading fertile selections of these shrubs. Removing spent flowers will reduce reseeding and improve the late-season display.

Top performers that deserve some love

When ‘Attraction’ hit the garden centers, it was touted as an improvement over ‘Royal Red’, which is quite an accomplishment because ‘Royal Red’ is considered butterfly-bush royalty. Their flowers share a similar vivid red-purple color, abundance, and large size. Where ‘Attraction’ truly differed was that it maintained a neater, more compact habit. ‘Attraction’ was almost 18 inches shorter than ‘Royal Red’, making it a better fit in small spaces.

The sumptuous red-violet flowers of ‘Red Plume’, while not exactly true red, came closest to a real red—maybe someday soon a cultivar will finally cross that line. ‘Red Plume’ was a strong bloomer with colossal flowers that stretched from 12 to a whopping 16 inches long at peak. Never a shrinking violet, ‘Red Plume’ was one of the tallest plants in our trial, too.

‘Silver Frost’ had a low-key quality, with silvery green leaves and small trusses of milky white flowers. At 8 inches long, the flowers were on the short end of the scale but were profusely borne from midsummer to hard frost. ‘Silver Frost’ was a favorite of our evaluators every year—“tight balls” and “big, fat plants” were both used to positively describe its dense habit.

‘Purple Haze’ is just one of the compact and sterile cultivars in the groundbreaking Lo & Behold® series. Deep purple–blue flowers were copiously and continuously produced; because the plant is sterile, all energy is put into making flowers rather than seeds. Its countless blooms arched outward and downward atop low-spreading plants. Its short, compact habit makes ‘Purple Haze’ perfect for massing or using as a ground cover. The genetic makeup of the Lo & Behold® series includes a few species that are less suitable for cold regions, so winter hardiness was on our minds. Unlike Lo & Behold® ‘Blue Chip’, which has died in three consecutive winters, ‘Purple Haze’ has been reliably root-hardy.

‘White Bouquet’ is another unabashedly large and robust butterfly bush, with an impressive floral display to match its size. Starting from the ground every spring, ‘White Bouquet’ grew steadily and swiftly at the start of the season, with a near-perfect rounded habit. The white flowers with yellowish throats nicely complemented the handsome, fine-textured, silvery green leaves.

‘Bicolor’ is a hybrid of B. globosa and B. davidii var. magnifica. The flowers resemble but are more open than those of B. davidii cultivars, with florets in rounded clusters loosely grouped along the stem. From purple buds, the flowers opened to pinky lavender with prominent orange eyes, before changing to orange from the bottom up. The coloring is truly unique and undeniably eye-catching. The habit was fairly dense but typically a bit looser than B. davidii cultivars. ‘Bicolor’ was one of a few butterfly bushes that were killed to the ground in the mildest winter.

‘African Queen’ is a beauty with dark violet florets jam-packed into 12-inch-long plumes. Like other butterfly bushes, the flower size was smaller after the first wave of blooms in midsummer. ‘African Queen’ had a robust habit with arching stems, which only added to the dramatic floral display. I found it somewhat surreal to watch these big plants grow, starting from nothing and getting nearly 7 feet tall in no time at all.

Sometimes knowing the story behind a name can increase your appreciation for a plant, and such was the case with Adonis Blue™, a cultivar in the English Butterfly™ series, named after butterflies found in England. Adonis Blue™ features pretty blue-purple flowers, small gray-green leaves, and a well-branched compact habit. One of my favorite late-season pairings is this butterfly bush with a pure white-flowered Japanese anemone (Anemone × hybrida ‘Honorine Jobert’, Zones 4–8).

I have mixed feelings about growing and promoting butterfly bushes. On the one hand, they are beautiful and reliable garden plants; on the other hand, their weedy nature cannot be denied. Keep these facts in mind before buying one of these shrubs:

• Their weedy to invasive nature is due to prolific seed production. Butterfly bushes are widely adaptable to a variety of conditions, easily settling into natural and disturbed landscapes—even concrete cracks (photo, above).

• During our six-year trial, seedlings were observed at nonweedy levels in our garden. Butterfly bush shouldn’t be grown—or should be used with caution—in areas where they’ve become troublesome.

• B. davidii is banned for sale in Oregon and Washington, where it is considered an invasive weed, and a number of other states from coast to coast have it on their watch lists.

• Only 20 states do not currently list B. davidii as a weedy or invasive problem.

• While deadheading and weeding out seedlings are helpful in reducing the potential spread of butterfly bush, plant breeders might be the answer to the problem. Myriad new seedless or low-fertility hybrids have trickled into the market in recent years.

• In 2011, Oregon approved the sale of cultivars that produce two percent or less viable seed. Oregon prohibits these sterile hybrids from being called butterfly bush because the name is too closely con­nected in commerce to B. davidii. In Oregon, these plants must be labeled as summer lilac, nectar bush, or seedless butterfly bush. The varieties listed below are considered “sterile”:

Up-and-comers that are worth a second look

The latest offering in the seedless Lo & Behold® series and one of the smallest butterfly bushes ever is ‘Blue Chip Jr.’ (B. ‘Blue Chip Jr.’). An abundance of blue-purple flowers up to 5 inches long bloomed continuously throughout the first summer in the trial. At 26 inches tall and 39 inches wide, it was larger than the anticipated 2 feet tall and wide. But it was developed as a ground cover, so maybe this broader habit will be just right. I’m eager to watch ‘Blue Chip Jr.’ over the coming years, and I hope it proves to be hardier than ‘Blue Chip’ has been for us.

The Flutterby™ series offers a choice of seedless cultivars in three sizes: small, medium, and large. In its first year, Flutterby Petite™ Tutti Fruitti Pink (B. ‘Podaras #13’) bloomed its heart out with an endless show of pretty fuchsia-pink flowers, 5 inches long, from midsummer to late fall. The compact, mounded plants were only 14 inches tall and 27 inches wide, but even if they double in height over time (as expected), they’ll still be small by butterfly-bush standards.

InSpired™ Violet (B. ‘ILVOargus2’) had the most graceful flowers of any butter­fly bush I’ve ever grown. Slender violet sprays arched pendulously downward from each branch, reaching an impressive 18 inches long and only a smidgen over half an inch wide. It reminded me of a butterfly-bush version of love-lies-bleeding (Amaranthus caudatus, annual). My mind might actually be blown away this summer if the flowers attain their purported 30-inch length. InSpired™ Violet was 44 inches tall and 61 inches wide in its first year but has the potential to be 4 to 8 feet tall and wide. The pink- and white-flowered cultivars in the seedless InSpired™ series did quite well last year, too.

Butterfly bushes are simple to grow. Once established, they are forgiving of drought conditions and seem unfazed by heat and humidity.

There’s a reason for their name

The blossom nectar attracts a variety of North American butterflies, such as black swallowtail, eastern tiger swallowtail (photo, above), great spangled fritillary, monarch, painted lady, and western checkerspot. Butterfly bushes, however, are not host plants to any native caterpillars.

Not all soil conditions are suitable

Butterfly bushes are not fans of wet soils, which can cause the roots to rot. 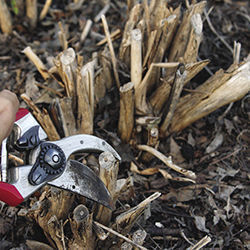 Each blossom is composed of many tiny florets, which are clustered in tapered spires from 4 to 20 inches long. For us, the inflorescences were commonly 2 to 3 inches wide at their broadest; however, at 9 inches wide, ‘Dartmoor’ (photo, p. 35)was the granddaddy of them all due to the side shoots below the main spire.

Pests and pollution aren’t a problem 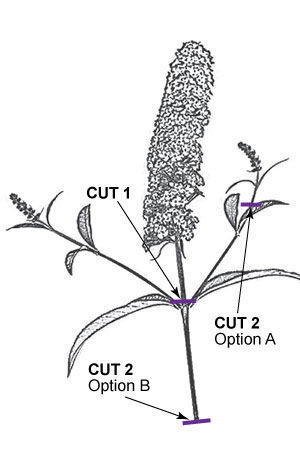 They are deer resistant and tolerant of urban pollution.

Because they bloom on new wood, stems lost in winter do not impact the summer flower show.

After the main bloom passes, cut it back to the main stem (CUT 1). After the secondary flowers die, you have two choices: Cut each back to just above the first set of substantial leaves (CUT 2: Option A), or tidy up the entire plant and reduce the number of pruning cuts by pruning back to the next set of leaves below the original inflorescences (CUT 2: Option B).

Richard Hawke is the plant-evaluation manager at the Chicago Botanic Garden in Glencoe, Illinois.

Photos, except where noted: Lamiot/courtesy of commons.wikimedia.org