Last summer, during a stretch of particularly hot weather in the Midwest, Fine Gardening traveled to the beer capital of the United States: Milwaukee, Wisconsin. After a short drive down I-43, we exited and then navigated our car into the picturesque neighborhood of Brewer’s Hill. This district is home to several incredible sights, but we were only interested in seeing one: the Sanger House Gardens, a historic piece of property that is home to a bed and breakfast, a private residence, and a beautiful array of mature gardens.

These gorgeous, woody-based beds are the creation of Steve Bialk and his wife, Angela Duckert. 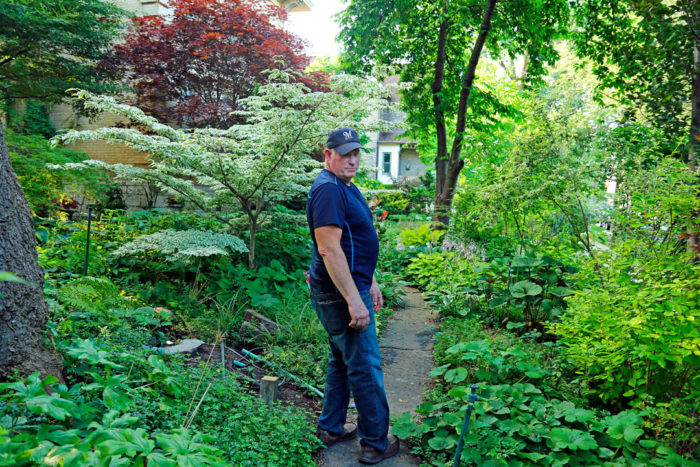 When you park your car on the street outside Sanger House Gardens, the first thing you notice is the plethora of plants that are arranged on a steep slope, flanking the front steps. The most striking specimens are perhaps ‘The Blues’ weeping blue spruce (Picea pungens ‘The Blues’, Zones 2–8) and a red Japanese maple (Acer palmatum cv., Zones 5–9). At their feet are several other dwarf conifers that include a treasured favorite of the owners, ‘Golden Midget’ Serbian spruce (Picea omorika ‘Golden Midget’, Zones 4–8). 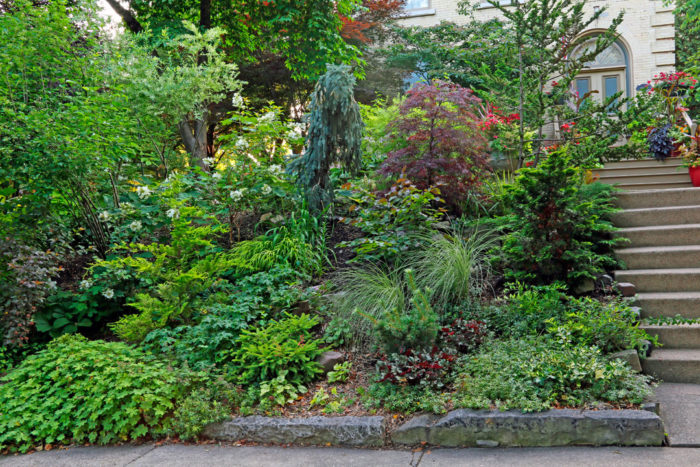 Once at the top of the stairs, most visitors turn left past the vibrant containers of annuals and tropicals to follow a recycled brick pathway into an understory of mature trees. This area includes many dry-shade-loving perennials such as ‘Elegans’ hosta (Hosta sieboldiana ‘Elegans’ Zones 4–9) and ‘Visons’ astilbe (Astilbe chinensis ‘Visions’, Zones 4–8). The real focal point of this area, however, is the stunning ‘Wolf Eyes’ dogwood (Cornus kousa ‘Wolf Eyes’, Zones 5–8). 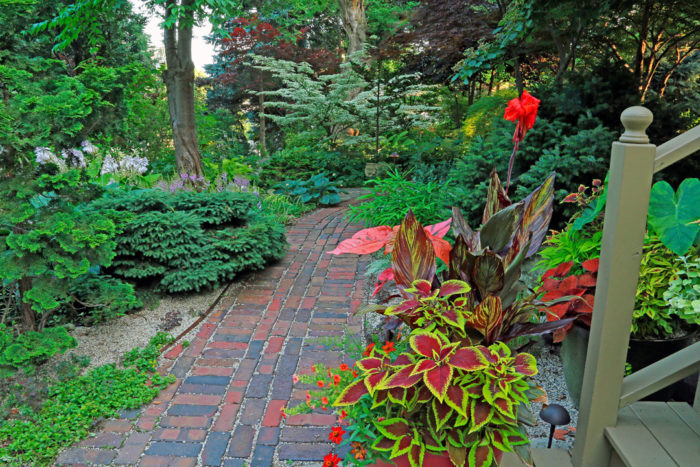 The brick pathway eventually forks and offers you a choice. To the right, you’ll find yourself at a small patio engulfed by more dry-shade perennials, such as variegated Solomon’s seal (Polygonatum odoratum var. pluriflorum ‘Variegatum’) and even some potted annuals such as a weeping orange begonia called ‘Bossa Nova Salmon Shades’. The patio is surrounded by more small trees—mostly Japanese maples and some dwarf conifers.

Had you gone left at the fork in the road, you would find that the pathway changes to gravel underfoot and leads you through a burgundy metal fence and into an area of partial shade where hearty perennials such as the red-flowered ‘Jacob Cline’ bee balm (Monarda didyma ‘Jacob Cline’, Zones 4–9) and assorted daylilies live. This area also sports some smaller shrubs in the understory, such as ‘Royal Purple’ smoketree (Cotinus coggygria ‘Royal Purple’, Zones 4–8). 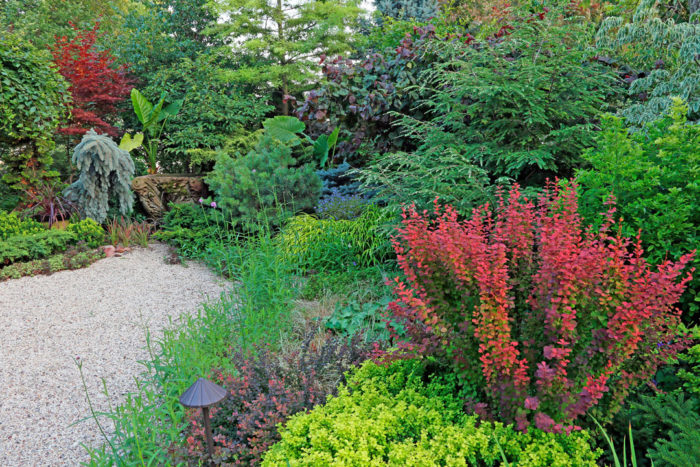 Whichever direction you choose, all options lead to the center of the garden, where you’ll find a small circular fountain surrounded by gravel walkways and gardens. These surrounding beds were once filled with only perennials, but Steve and Angela discovered quickly that they lacked structure. So they planted woodies such as dwarf Alberta spruce (Picea glauca ‘Conica’, Zones 2–8) and a dwarf golden arborvitae (Thuja orientalis ‘Aurea Nana’, Zones 6–9). 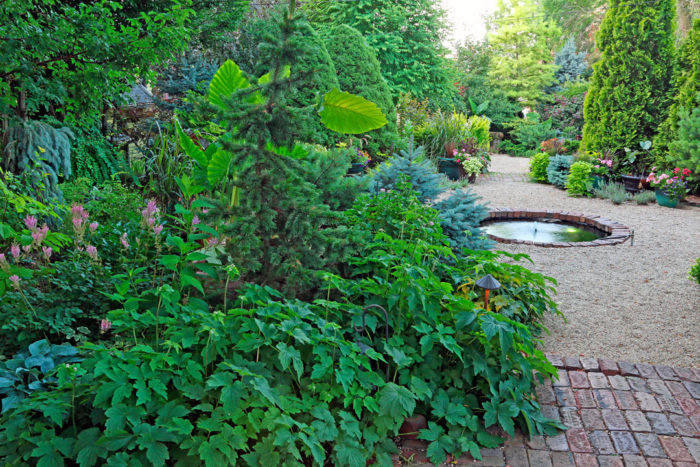 Walk past the fountain with gravel crunching under your feet, and you’ll come to the end of the center garden area. Here you’ll find some of the most celebrated plants in this landscape, such as a white-tipped Canadian hemlock (Tsuga canadensis ‘Gentsch White’, Zones 3–7), a ‘Red Majestic’ contorted filbert (Corylus avellena ‘Red Majestic’, Zones 4–8), and a couple of different blue spruces, one of which is ‘Globosa’ dwarf blue spruce (Picea pungens ‘Globosa’, Zones 2–8). 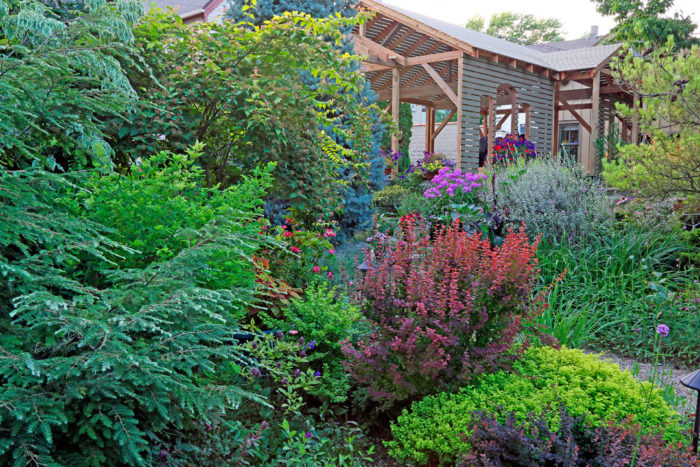 Turn around from the previous spot, and you’ll be facing the newly constructed lathe house, which covers a larger patio. Several large trees and shrubs help to take the scale of the outbuilding down, including another big blue spruce, ‘Gibraltar’ bush clover (Lespedeza thunbergii, ‘Gibraltar’, Zones 4–8), and a dragon’s-eye pine (Pinus densiflora ‘Oculus Draconis’, Zones 4–7).

If you squeeze between the blue spruce and the bush clover, you’ll find a small, charming seating area. This secret spot, which can’t be seen from the rest of the garden, offers a place of quiet serenity—and a great place to drink a Milwaukee’s Best beer! This is also a place where Steve and Angela place potted annuals, such as scented geraniums. 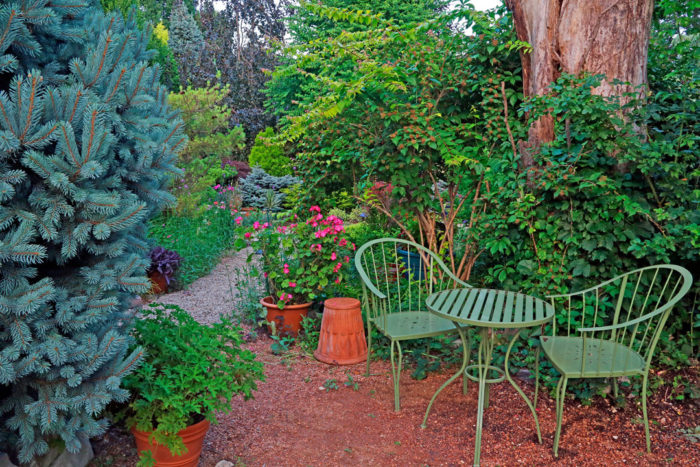 If you continue past the secret seating area, you find a set of limestone steps that takes you down to the street. Here you’ll see more conifers, which offer year-round privacy from the busy urban surroundings. A large ‘Daub’s Frosted’ juniper (Juniperus × pfitzeriana ‘Daub’s Frosted’) fills in a good chunk of the slope, while a tall weeping cedar (Cedrus cv., Zones 4–7) is an interesting focal point. A smaller lathe house, painted a mulberry color, perches just on the edge of the property and is a place where plants that await planting are hidden. 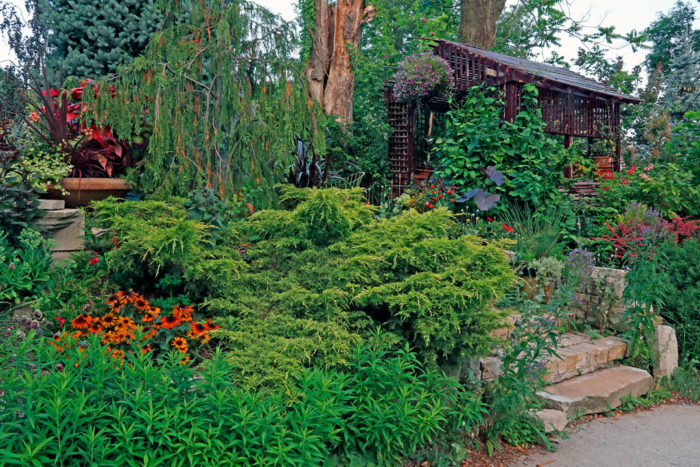 The tour ends as you walk down the street, past the neighbors’ houses, around the corner, and back to your car. Never ones to give up any space worth planting, Steve and Angela filled this 30° slope. Here you’ll find more blue spruce, cotoneaster (Cotoneaster cv., Zones 4–9), ‘Golden Mop’ threadleaf false cypress (Chamaecyparis pisifera ‘Golden Mop’, Zones 4–8), and some tough-as-nails perennials. This last view of the Sanger House Gardens leaves you with the feeling that you just journeyed through a 60-acre landscape when you really just walked through a city lot that’s only 2/3 of an acre. 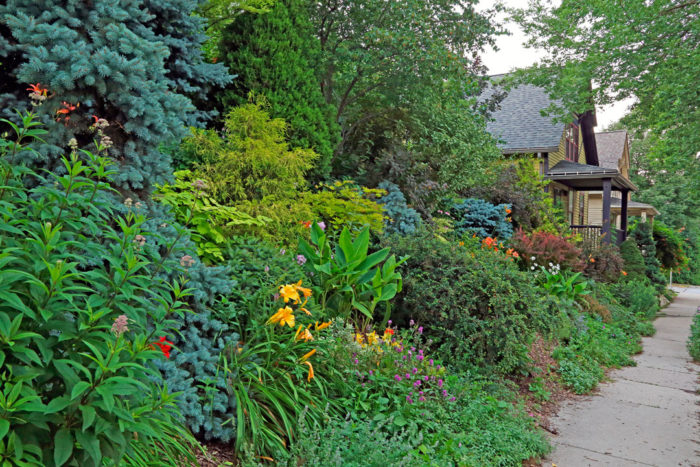