Dumber Than A Potted Plant? Not So Fast

Out here in the far west, October is usually summer’s last blast, but you wouldn’t know it from the umbrella weather Lin and I ran into down San Diego way last weekend. Don’t get me wrong – I love having to use the windshield wipers in our SoCal near-desert climate. An early start to the rainy season makes me happy as a banana slug in a redwood forest.

After a jolting blast of Peet’s dark roast coffee and a couple of wrong turns on the freeway (so much for my iPhone MapQuest app) we made our way to Balboa Park, a 1200-acre cultural park that was originally the location of the 1915 Panama-California Exposition and then the 1935 California Pacific International Exposition.

Not knowing quite where we were heading, we pulled into the first parking lot we saw, seeking the Museum of Photographic Arts. As we found our way through a newly planted garden between the buildings, there it was, framed in the arch of a colonnade – the 1915-era Botanical Building, one of the largest lath structures in the world. 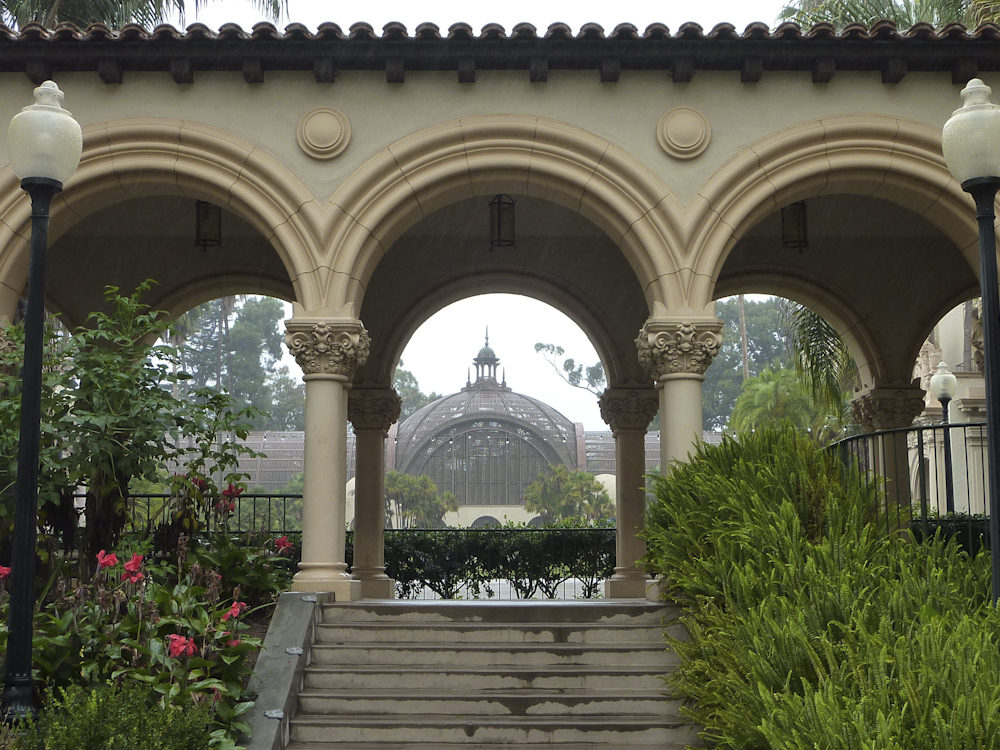 The massive but graceful edifice houses more than 2100 permanent plants, mostly tropicals, some of which you might find in the houseplant section of your local garden shop. There were also a slew of specimens you probably wouldn’t see unless you macheted your way into a jungle. 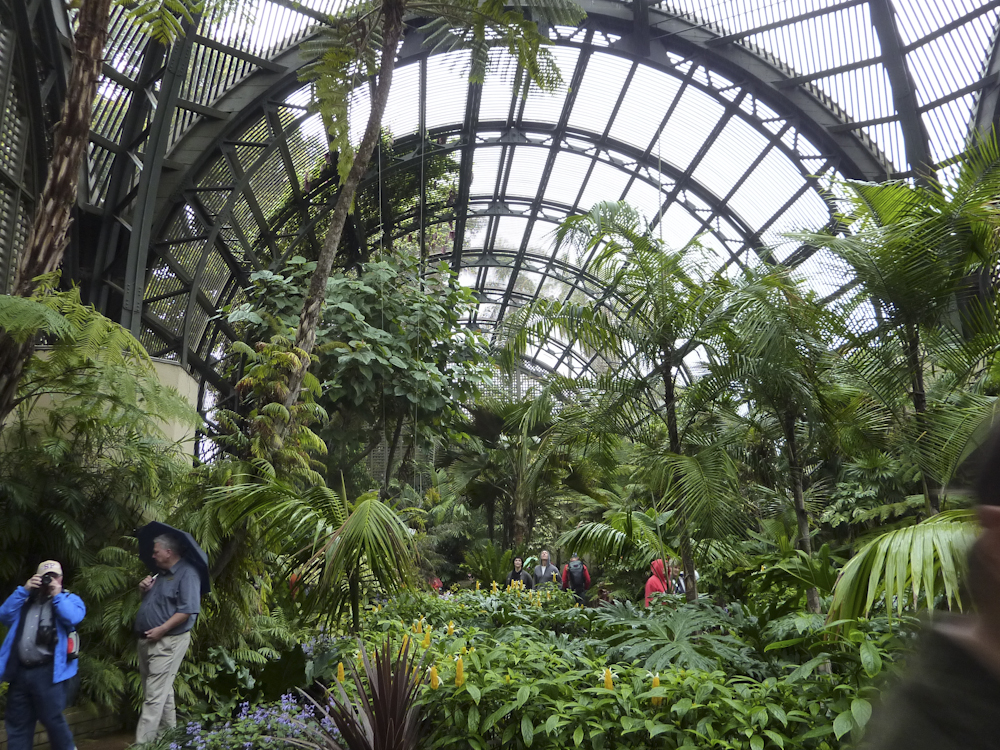 Light rain was finding its way through the gaps in the lath. I whipped out my trusty, not-water-proof Panasonic DMC-ZS3, thinking that there had to be a blog post here, but not quite sure what my creative juices would serve up. 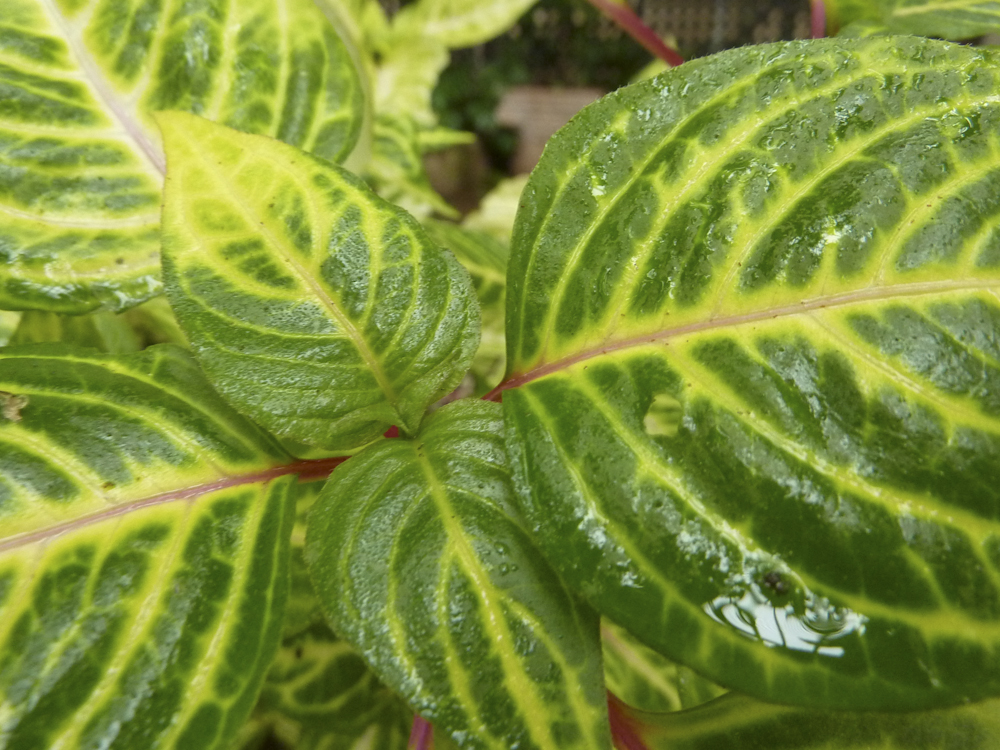 “I know,” I thought, as my writing muse kicked in. “Variegation. There are so many cool speckled, striped, splotched and smeared leaves in this collection, I’ll write about how colored leaves can spark up a garden.”

It seemed that lots of the variegation in this festival of foliage occurred along the veins in the leaves: white, chartreuse, yellow, red, pink – a veritable Glidden color wheel of delights.

“Plan B – I’ll shift gears and shoot all the cool configurations of the plants’ vascular systems,” I thought. “How creative!” I noticed that some veins formed beautiful geometric patterns: radial (like the spokes of a bicycle wheel); palmate (emerging as fingers from a hand); and pinnate (branching out from a central rib in a feather-like pattern) like the philodendron leaf, below. 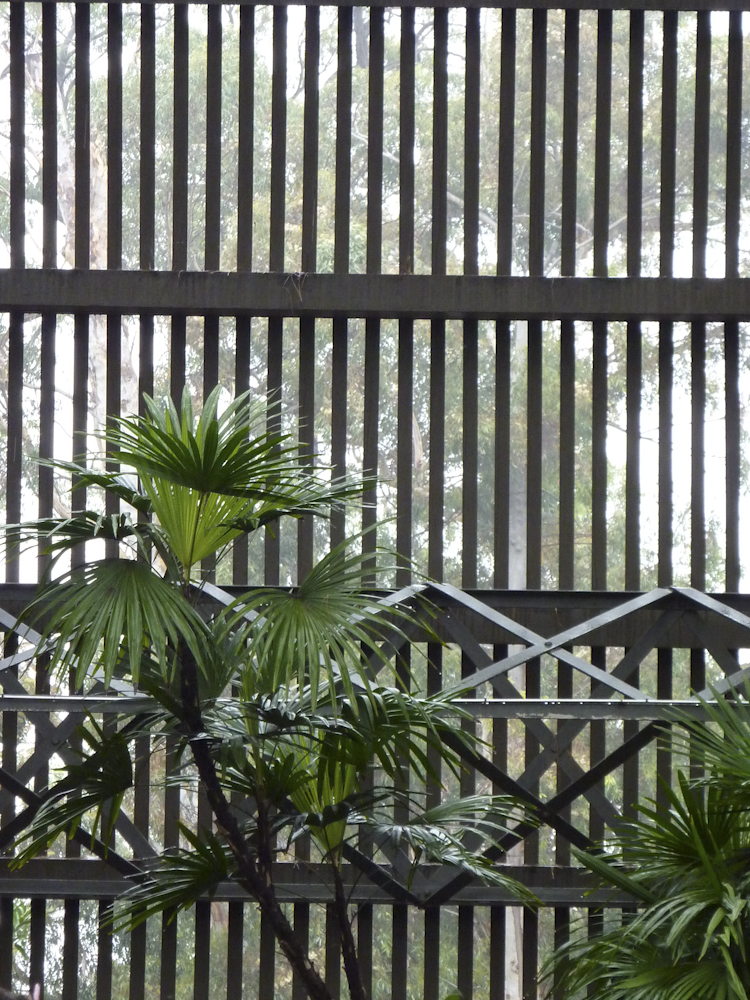 So off I went to look for unusual leaves with different vein patterns, like ferns and Peperomia, and Acalypha. Palms might be interesting.

While I was lining up this shot, I noticed the strong vertical lines of the trunk repeating the structure of the lath. “Switch to Plan C! I’ll photograph the way the building employs the same structural principles as plants, to keep from succumbing to The Big G – GRAVITY!”

Think about it. Every living thing on this planet has evolved in the presence of gravity. We humans have bony skeletons. Vascular plants are higher plants that have tissue for transporting water, minerals and photosynthetic products around. They manage to balance the need for adequate “bone-structure” to support the weight of the leaves with the tissue needed to convert carbon dioxide into organic compounds, using the energy from sunlight. (FACT: Scientists call this Frodosynthesis, a process developed by Hobbitsez). 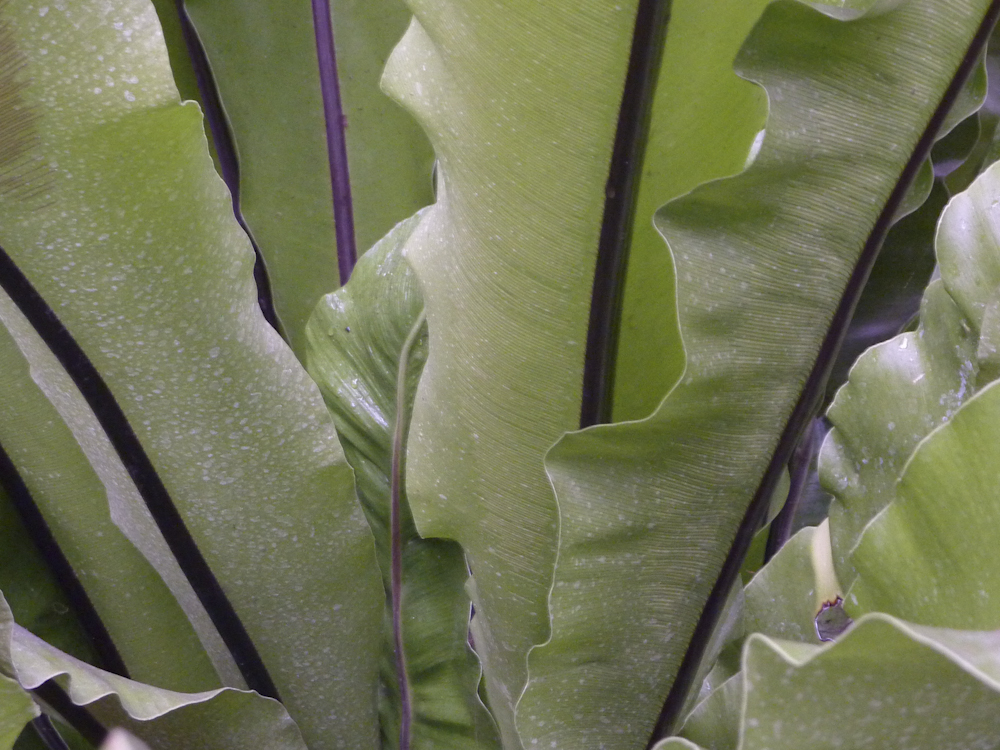 Check how this bird’s nest fern (Asplenium nidus) holds its fronds crisply upright. It’s an epiphytic fern (it lives up in the crotches of trees with its roots in decomposing organic material) from tropical, high rainfall environments where it gets hammered by heavy rain. So the plant had to evolve a heavy-duty vertical “column”, like the ones that hold up the Botanical Building. 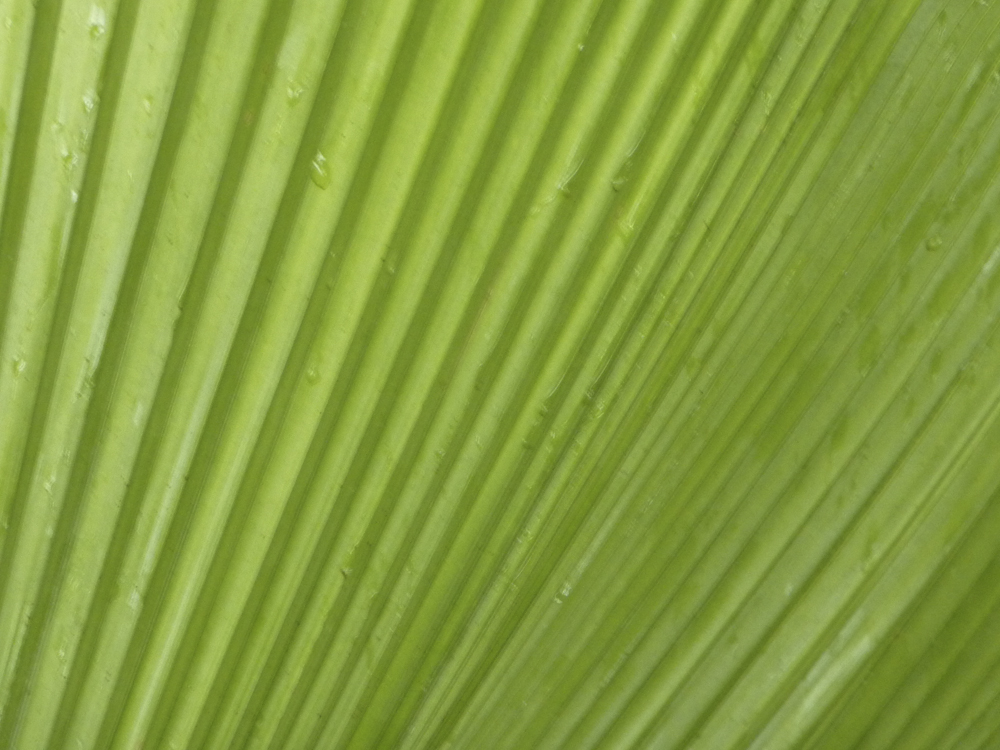 Image you’re in the tropics and sweating like a garden writer in Dallas in September (remember that blog post?). All you have is a sheet of notebook paper to fan yourself. Your best strategy is to fold the paper into little peaks and valleys to stiffen it. That’s probably just what this palm frond was thinking. It has to stand up to expose as much surface to the sun without buckling in the wind. Ya’ see, plants figured this stuff out way before structural engineers dreamed of slide rules and pocket protectors. 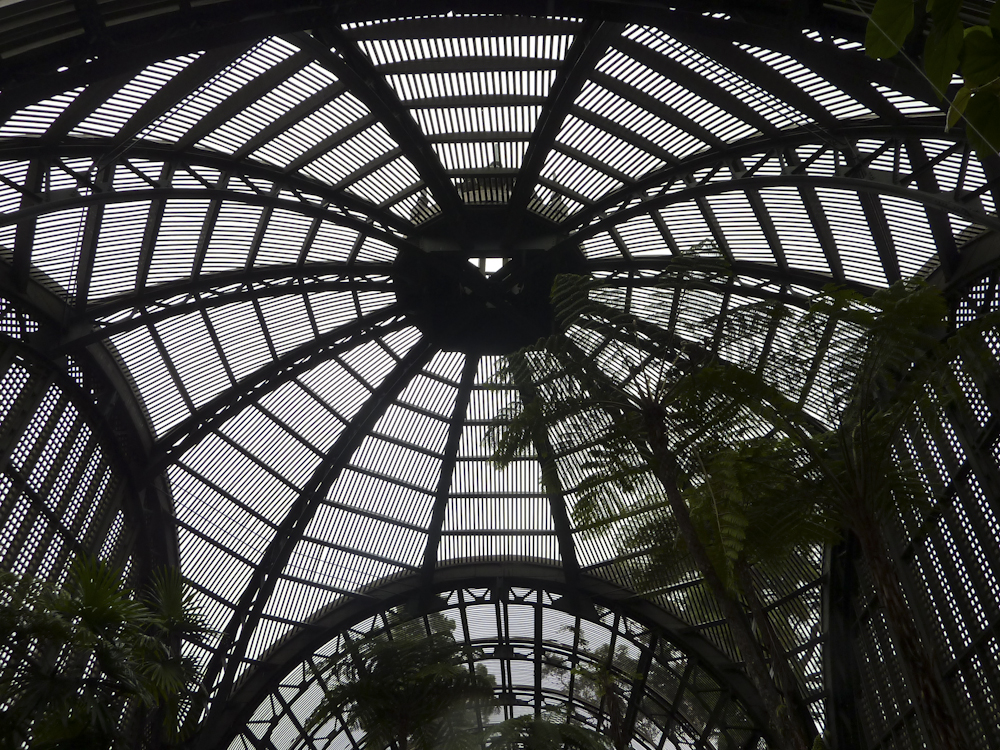 Carlton Winslow, the architect for the Botanical Building, understood the need to spread the weight of the dome across arches that resist compression. I’m guessing he was pretty good at math. 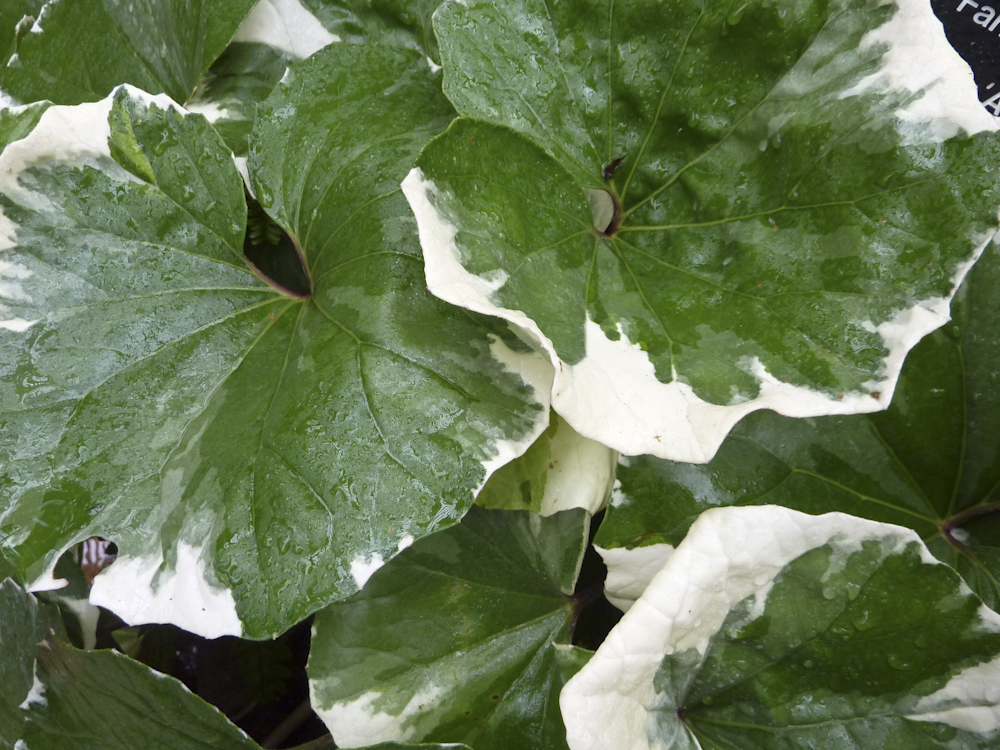 This Farfugium japonicum ‘Argenteum’ balances a similar load on a single stem using a radial vein arrangement to keep the outer edges of the beautiful, milky white leaves from flopping.

As we all remember from elementary school, “The especially significant characteristic of the vascular system of the leaf is its close spatial relation to the mesophyll. Measurements performed on six species of dicotyledons, herbaceous, shrubby, and arborescent, have shown that the total length of the veins averaged 102 cm per sq cm of blade.” (Plymale & Wylie, 1944 – Thanks to Susan Eubanks at the Los Angeles County Arboretum & Botanic Garden for researching this for me.)

To us, it’s simple, but how does a plant figure this stuff out? To better understand how a simple looking perennial figured out this neat trick, I asked the Farfugium a simple math problem: “If a chicken gets on a train in Miami heading north into a 12 mile per hour headwind and a platypus leaves Kansas City on a Greyhound bus traveling at…”

Well, you get the idea. The plant just sat there staring at me, but I knew I was in the presence of genius.