Bluestar: A Native Plant for the Masses

There’s plenty to love with this easy-to-grow, drought-resistant beauty

In the 1990s there was an electrifying buzz around Arkansas bluestar (Amsonia hubrichtii) that rocketed it from a collector’s plant to a phenomenon in the gardening world. Its alluring blue flowers were familiar to me—I already knew the hulking eastern bluestar (A. tabernaemontana)— but the soft, threadlike leaves and rich, golden fall color of Arkansas bluestar were a novelty. These bluestars are similarly built, although Arkansas bluestar seems less intimidating because of its fine-textured foliage. Along the way from native plant to indispensable garden perennial, Arkansas bluestar was honored as Perennial Plant of the Year in 2011, which is more than just a beauty prize or popularity contest. Its ornamental merits and easy culture have made it a mainstay, but it’s certainly not the only worthy bluestar.

Aptly named for their starlike flowers of the prettiest periwinkle blue to the very palest blue, bluestars hold their blossoms in upright terminal clusters beginning in late spring. Their densely crowded flower buds often look smoky black before the inflorescences unfurl. This flower show is fleeting— lasting two to four weeks, maybe a bit longer. Pigeonholing bluestars as spring-blooming perennials is fair, but they offer so much more through the seasons. Strong bushy habits and healthy handsome foliage carry bluestars past spring and into summer and fall. There are times when I think my deep appreciation for bluestars is simply because any early flowers are special after a brutal Midwestern winter. But as summer hurtles on to fall, I’m evermore impressed by the strength and beauty of certain top-notch bluestars long after their flowers have faded.

At a glance: Amsonia spp. and cvs.

Native range: A. hubrichtii, A. tabernaemontana, and A. ciliata are widely celebrated North American natives, while lesser-known Amsonia species such as A. orientalis are found around the world.

‘Blue ice’ (A. ‘Blue Ice’) has an interesting, albeit sketchy, back story. Discovered in a greenhouse full of eastern bluestar and presumed to be a hybrid, it was selected for its compact habit and dark blue flowers and dubbed ‘WFF Selection’— a name it still holds at White Flower Farm. With that nursery’s permission, Tony Avent of Plant Delights Nursery rechristened it to give it greater appeal. ‘Blue Ice’ features deep lavender-blue flowers with the broadest petals of any bluestar. Its leaves look much like eastern bluestar, but it’s less than half the size at only 20 inches tall. Unlike other bluestars, ‘Blue Ice’ is rhizomatous. Some say it’s a hybrid or maybe a selection of A. orientalis—formerly known as Rhazya orientalis—but most gardeners will love it even with these unresolved identity issues.

Eastern bluestar holds its pale blue flowers in the largest clusters of all—6 inches long and 4 inches wide. The flower color quickly fades to whitish blue in warm spring temperatures. The dark green, ovalish leaves turn yellow in midfall—often a good color, but never as brilliant as that of Arkansas bluestar. Its tall stems—up to 50 inches—can be managed by cutting them back by a third to a half after flowering, which promotes a bushier, more compact habit.

Willow bluestar (A. tabernaemontana var. salicifolia) differs from eastern bluestar in having narrower lance-shape leaves, but it is similar in other regards and was an equally strong performer in the trial.

While keeping good company with newer lookalikes, Arkansas bluestar is probably still the leader of the bluestar pack. Pale blue flowers in large, loose clusters bloom a week or so later than many bluestars. Its narrow, threadlike leaves are crowded on supple yet sturdy stems. I like the way the feathery tips of the new growth arch like tassels over and through the retreating flowers. Brilliant, golden yellow fall foliage— often infused with an orange glow—is Arkansas bluestar’s crowning glory.

Shining bluestar (A. illustris) superficially resembles eastern bluestar in leaf and generous habit, but a closer look reveals some distinctive differences. The dark green leathery leaves are shiny, and the seedpods are pendant within the willowlike foliage rather than upward-facing like other bluestars. Slightly smaller pale blue flowers are abundant for several weeks beginning in late spring. The fall color is a passable yellow—not the best but not the worst.

‘Lemon Drop’ (A. ‘Lemon Drop’), a sister introduction of ‘Butterscotch’ from local plantsman John Wachter, was selected for fall color—in this case, a beautiful bright lemony yellow. ‘Butterscotch’ and ‘Lemon Drop’ are almost twins in habit and size, although ‘Lemon Drop’ is tighter and denser and its soft feathery leaves more lustrous. Dark lavender-blue flowers open from almost black buds in late spring. The blossoms are about half the width of ‘Butterscotch’ due to the reflexed petals, which makes the flower clusters slightly smaller as well.

‘Midway to Montana’ (A. ‘Midway to Montana’) is one of a handful of excellent hybrid bluestars. In late spring, pale blue flowers burst from sky blue buds. (Color is typically intensified in the bud stage of bluestars.) At half an inch rather than three-quarters of an inch wide, its green leaves are narrower than those of eastern bluestar, and they turn yellow in fall. ‘Midway to Montana’ developed a robust bushy habit over time, but it was not quite as dense as ‘Lemon Drop’.

You’ll need to wait until autumn to see why ‘Butterscotch’ (A. ‘Butterscotch’) got its name; the tawny, golden yellow fall color peaks for us in late fall. The show is worth the wait, but there’s plenty to see in the meantime. Large pyramidal tufts of light blue flowers adorn rigid stems in late spring. The pointed petals are horizontal, not bent downward, so the starry flowers are larger than those of many other bluestars. About a week after full bloom, a flush of new growth begins to mask the flowers—an interesting but not altogether favorable trait of all bluestars. Slender, threadlike leaves clothe sturdy stems that reached a robust 48 inches tall and 64 inches wide in just a few years.

‘Fontana’ eastern bluestar (A. tabernaemontana ‘Fontana’) is a fantastic selection of eastern bluestar with all of its good qualities—plus a few more—in a smaller package. At 32 inches tall, ‘Fontana’ is significantly shorter than the species but still has a broadly vase-shape habit. The darker blue flowers are a nice innovation, although they and the inflorescences are smaller. Given the dense habit, it’s easy to overlook the attractive purple stems. Glimpses of dark purple fruit in late summer add interest, but the pods shatter long before the leaves turn yellow in the fall. 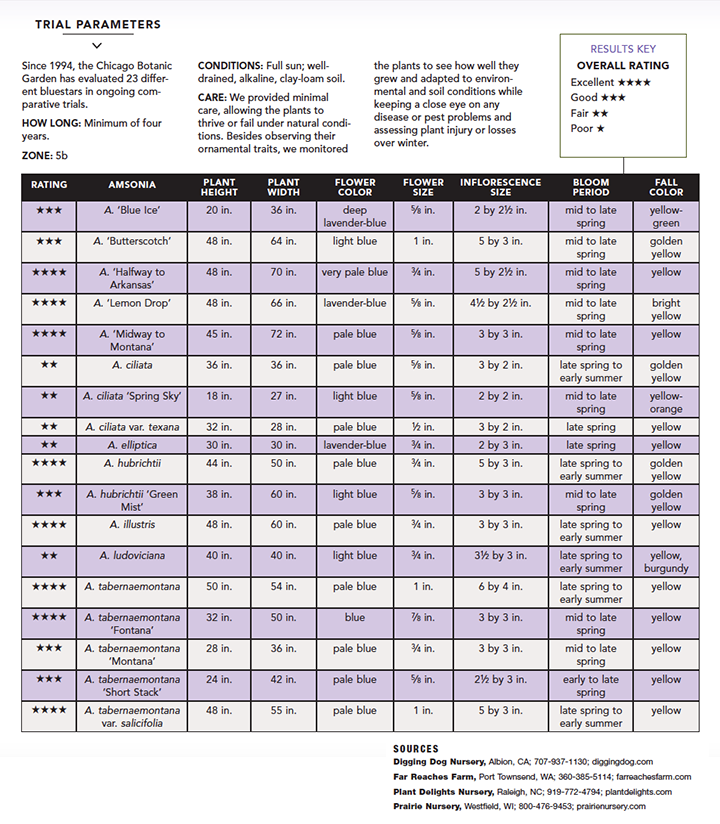 New Selections to Keep on the Radar 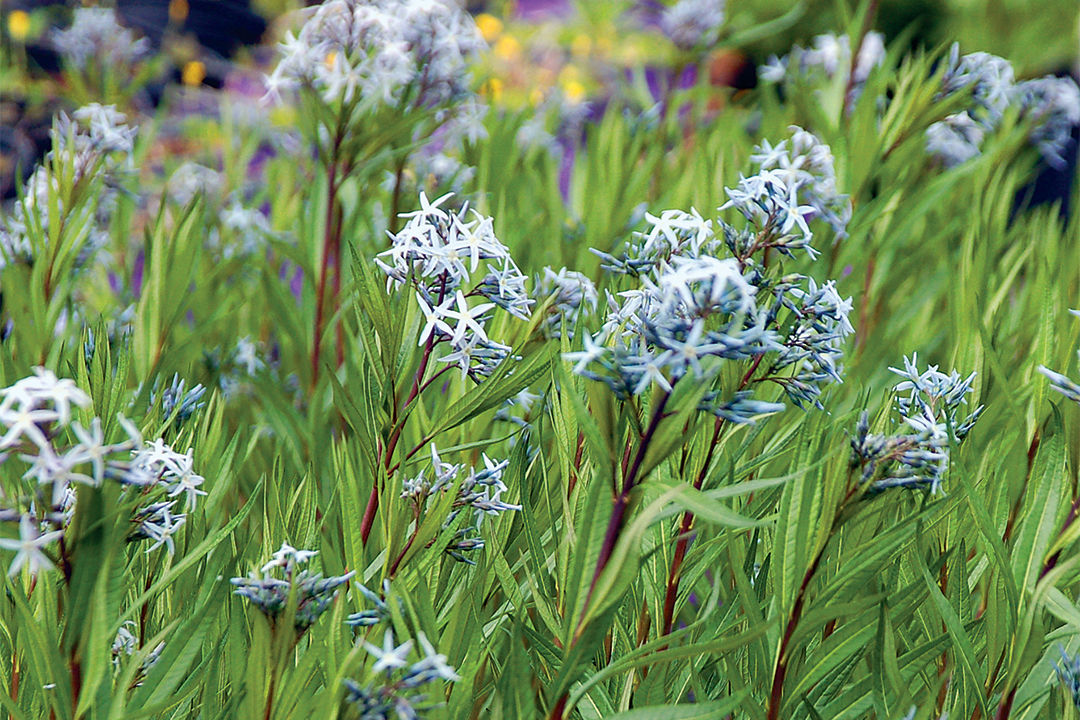 ‘First Hit’ eastern bluestar (A. tabernaemontana ‘First Hit’) is showing great promise after just two years in the trial. Light blue flowers to nearly an inch across bloom from late spring into early summer. Glossy dark green leaves—narrow but not threadlike—turn a pleasing yellow in fall. ‘First Hit’ has a compact, rounded habit with red-purple stems to 24 inches tall. 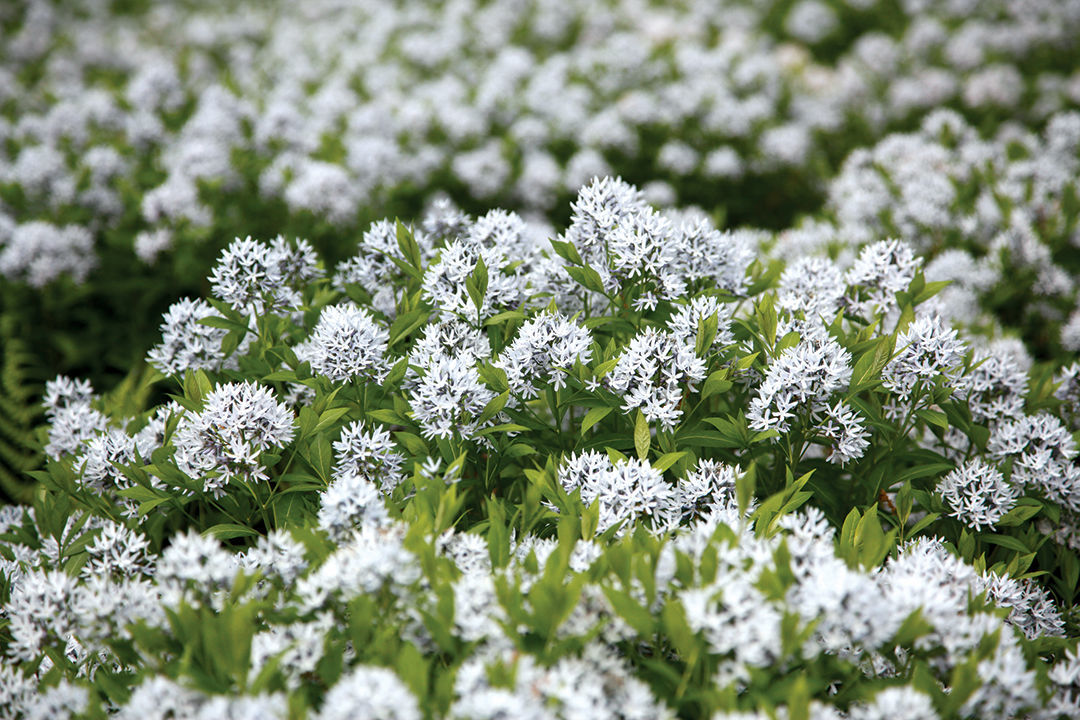 ‘Short Stop’ eastern bluestar (A. tabernaemontana ‘Short Stop’) is the first introduction in the Baseball™ series and has been in the trial for three years. Its rounded clusters of light blue flowers are plentiful in late spring and are followed by deep burgundy seedpods that are not buried as deeply within the broad green leaves. ‘Short Stop’ looks to me like a compact version of ‘Fontana’, with similarly dark purple stems, but is only 24 inches tall and 36 inches wide. 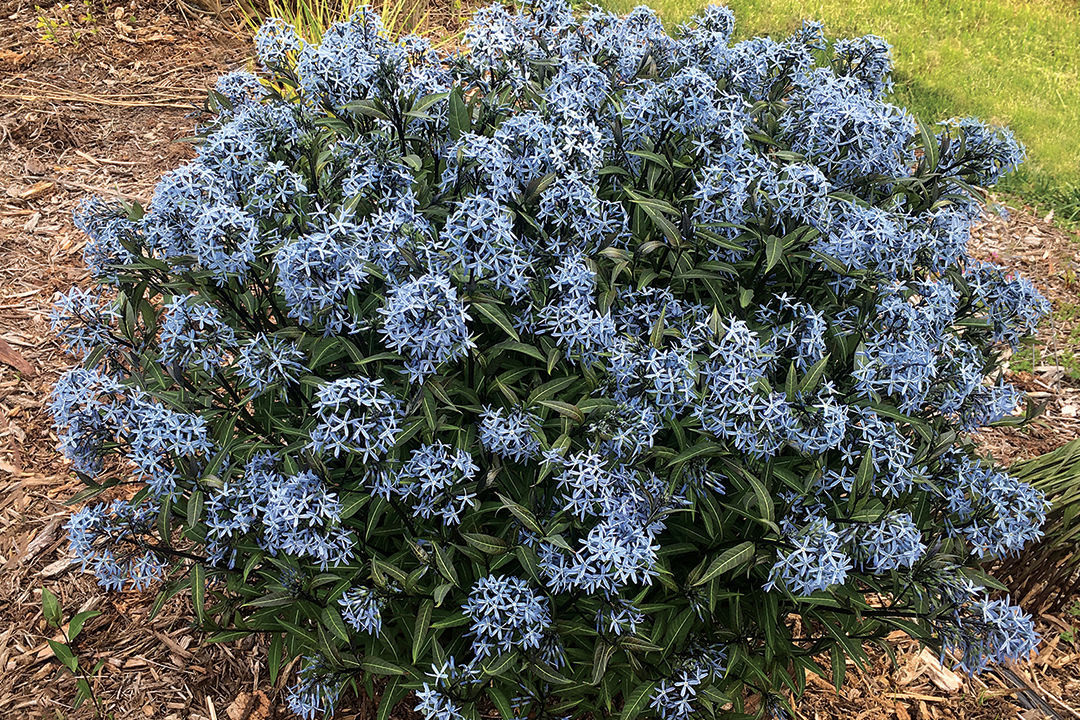 The near-black stems and periwinkle-blue flowers of ‘Storm Cloud’ eastern bluestar (A. tabernaemontana ‘Storm Cloud’) are an eye-catching springtime combination. While ‘Storm Cloud’ is distinctly a bluestar, its petals are wider and more round-tipped than most. As the flowers fade, so does the stem color—remaining colorful for summer, just not black. The broad, dark green leaves have prominent silvery veins and turn yellow in fall. After two years in the trial, the plant habit is vase-shaped to 20 inches tall and 22 inches wide but will purportedly become rounder and broader with age. ‘Storm Cloud’ is the discovery of Hans Hansen and Tony Avent—two keen-eyed plant breeders who have given gardeners a myriad of exceptional plants. 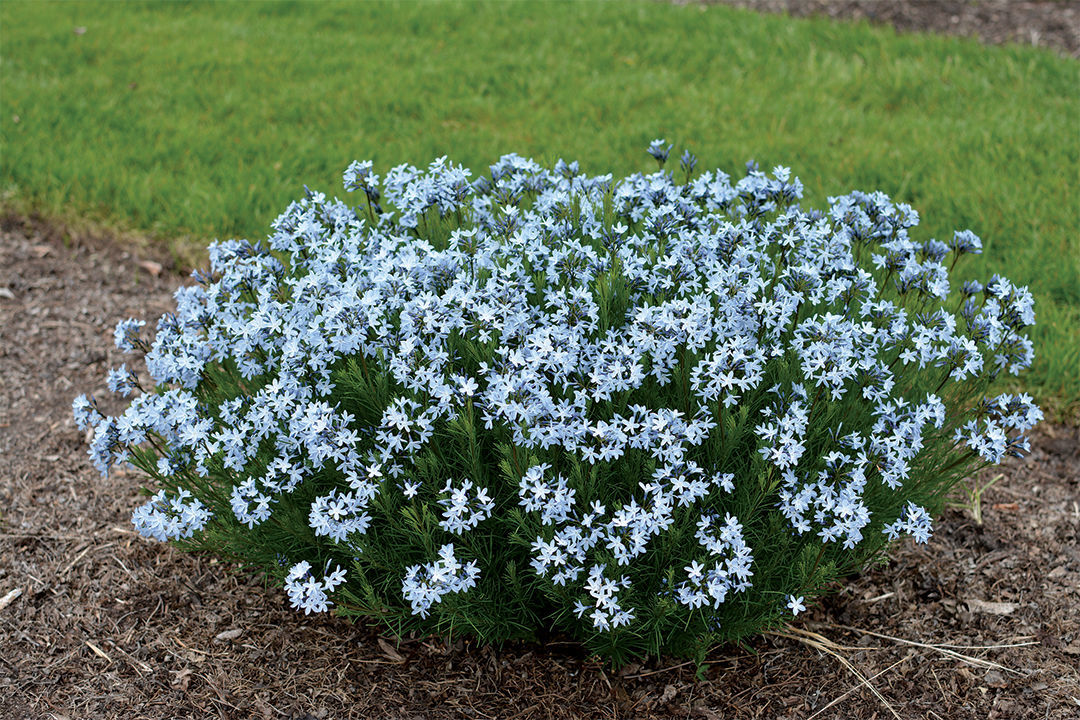 ‘Verdant Venture’ (A. ciliata var. tenuifolia ‘Verdant Venture’) might well be the coveted Holy Grail (of bluestars). I hate to be a tease, but this one won’t be available to gardeners for a few more years. Large flowers of light blue to violet open in early spring, and although their blanketing of the plant is impressive, they are too ephemeral to get naming rights. ‘Verdant Venture’ refers to the lush, dark green foliage whose threadlike leaves turn golden yellow late in fall. Fine-textured and amazingly compact, the plants are 28 inches tall and 60 inches wide after 10 years in the trials. I’ve yet to meet anyone too jaded to not be blown away by ‘Verdant Venture’.

The ins and outs of bluestars