Salvias That Won’t Let You Down

I’m lucky to live in Chicago—maybe not in February when we’re buried in snow, but in spring, it’s a different story. One of my favorite spots in the city is the Lurie Garden in Millennium Park (if you’ve been to Chicago in recent years, you’ve likely visited), a delightful place of imaginative plant combinations in ever-changing patterns. In late spring and early summer, blue waves of hardy salvias flow like a mighty river from north to south through the entire garden—a singular sight that always elicits an awed gasp. The magnitude and richness of this sapphire and amethyst tapestry is not to be missed.

Admittedly, I have a soft spot for salvias—I’ve long coveted the tender ones that won’t make it through a Chicago winter, all the while cherishing the hearty selection of hardy ones that will. Unfortunately, since salvia has a bad reputation for being in its prime for such a short span of time, it hardly seems worth the effort. Standing in a sea of salvias in the Lurie Garden a few years ago, though, I thought, surely there must be more amazing varieties like these out there. It was time to take a look at the latest cultivars of these dependable perennials—a new trial had begun!

Top performers that are worth the investment

The “it” sage for many years was ‘Mainacht’ (syn. ‘May Night’), which won the Perennial Plant of the Year award in 1997. Honestly, I’m not sure that another sage has diminished its popularity, although it has more competition than ever. Spikes of deep violet-blue flowers with purple calyces smother the plants every year. And it is usually one of the first salvias to bloom each spring. ‘Mainacht’ stands tall in full sun, although in partial shade, it relaxes and may even flop. Early in my gardening life, I grew ‘Mainacht’ but let it slip out of my garden because I wanted something different. However, during an exceptionally cool spring a few years ago, I was captivated by the intensity of its flower color in plantings around Chicago, and now it’s deservedly back in my garden.

If ‘Madeline’ were being judged on its floral display alone, it would get five stars hands down. Pretty purple and white flowers are bountiful for several weeks in early summer. The habit is a little too unrefined for my taste, with large, coarse-textured leaves and loose floral spikes. As the flowers pass, the mostly chartreuse stems and calyces quickly turn brown, and deadheading is a must at that point. Seedlings from ‘Madeline’ were common in the garden, although not prolific. Pairing ‘Madeline’ with something like ornamental grasses that mask the coarse foliage but accentuate the flowers is the best plan.

‘Eveline’ stood out from the start; an early bloom time and mauve-pink flowers with dark purple calyces distinguished it from other salvias. ‘Eveline’ is bushy with strong vertical stems loaded with flowers that keep bees and butterflies busy for over a month. A quick trim after flowering encourages new growth and rebloom into fall. We have the keen eye of Piet Oudolf, designer and plantsman, to thank for ‘Eveline’; he introduced it from his nursery in The Netherlands. Frankly, I didn’t see all that much difference in appearance between ‘Eveline’ and ‘Pink Delight’, although ‘Eveline’ bloomed earlier and was a stronger plant overall.

‘Mainacht’ was my favorite salvia until I saw ‘Caradonna’. The deep purple, nearly black stems and calyces are striking on their own, but with the blue-violet flowers, it’s a crazy hot contrast. Taller than wide, ‘Caradonna’ has a somewhat narrow habit, but was two to three times taller than references said—reaching 36 inches tall some years. Size discrepancy aside, there was no question the award for swarthiest floral display belonged to ‘Caradonna’. Amethyst-colored flowers such as ‘Caradonna’ pair splendidly with silver and gold.

Short and sweet, Marcus® (S. ‘Haeumanarc’) is proof that bigger is not always better. Marcus® tops out at only 15 inches tall with flowers, but it measures up to the best of the best in all other traits. An exceptional show of dark purple-blue flowers with purple calyces blankets these compact plants nearly all summer. There seems to be a disagreement over whether this is a diminutive selection of ‘Mainacht’ or ‘Ostfriesland’, but honestly, knowing it won’t affect how much you love this little guy. And while I’m not a big fan of downsizing every plant for smaller gardens, Marcus® is reason enough to look down.

The winter hardiness of yellow salvia (S. koyamae) was uncertain when it arrived on our doorstep. Although the plants suffered some losses each winter, it proved to be vigorous and long-lived. Yellow salvia prefers a shady site with moist, rich soils but will tolerate some sun. In fact, the plants that received more light produced about 50 percent more flowers than the shaded plants. The flower show was never extravagant, but a midsummer-to-frost bloom period made up for it. Bold-textured green leaves, to 6 inches long and 5 inches wide, were troubled with minor chlorosis in our alkaline soils. This plant has a spreading habit, forming a dense ground cover over time. For a plant not expected to live, it sustained itself in the same place in our garden for 22 years; that alone warrants a shout-out.

‘Wesuwe’ has been around for a while but is experiencing a renaissance of sorts lately. It’s been embraced by Piet Oudolf and many designers that he’s influenced, so I see it showing up in municipal plantings and private gardens more and more these days. ‘Wesuwe’ is similar to ‘Mainacht’ in some respects, but its flowers are a shade lighter and come on a bit later. The floral bracts hold their rosy color for several weeks after the flowers have dropped. In full sun, ‘Wesuwe’ rarely had floppy stems or became lax and open, and recovered quickly after being sheared.

Since 1993, the Chicago Botanic Garden has evaluated over 50 salvias. The original trial ran from 1993 to 1998 and contained 15 types; 40 additional salvias have entered the trials since then.

Although best grown in moist, well-drained soils, many varieties, like ‘Ostfriesland’, can survive with minimal water. In fact, this particular salvia has grown successfully on our green roof for five years—proof positive of its drought tolerance. Here are some other things you should know about salvias. 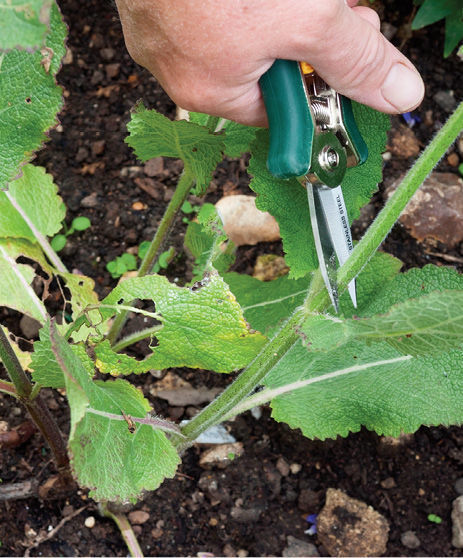 New kids to keep an eye on

‘Ave Maria’ (S. nemorosa ‘Ave Maria’) piqued my interest as its first flowers opened two years ago, and it has held my attention ever since. The pairing of bright fuchsia-colored flowers with deep purple calyces and stems gives ‘Ave Maria’ a sultry look. Although it feels slightly irreverent to refer to ‘Ave Maria’ as sultry, it is a sexy color. From midspring to early summer, an abundance of 5-inch flower spikes cover the mounded plants (18 inches tall and 30 inches wide). The calyces hold their color for a long time, but eventually, even ‘Ave Maria’ needs to be cut back to give it a fresh look. Rebloom is possible, though, from midsummer through early fall—hallelujah!

‘Blueberry Beret’ (S. nemorosa ‘Blueberry Beret’) is billed as a dwarf ‘Caradonna’, which is apt given its violet-blue flowers and dark purple calyces that hold their color for several weeks after flowering. This is a delicious color combination that would look good on a plant of any size. The compact, bushy habit was 16 inches tall and 18 inches wide after two years, and the green leaves were noticeably darker than other new selections.

The flowers of ‘Sensation Sky Blue’ (S. nemorosa ‘Sensation Sky Blue’) are medium purple-blue—noticeably bluer than other cultivars in the trial—with lighter purple calyces and stems. The name is a bit of a misnomer since the flowers are not actually sky blue, but I want to live in the Technicolor world where the sky is this color. In late spring, the plants are blue tuffets, covered from top to bottom with slender flower spikes to 5 inches long. The green leaves are small and fine-textured, too, and the densely mounded plants max out at 12 inches tall and 15 inches wide—the smallest salvia I’ve grown.

At this time the salvia I know the least—but am most excited about—is Windwalker™ (S. ‘Royal Red’). Bred in Colorado, ‘Royal Red’ is 48 inches tall and wide and crowned with sumptuous rosy-red flowers that keep coming all summer long. Touted as a great plant for xeric gardens, this plant is rated for Zone 5. The key to its success is providing good drainage, both in summer and winter. 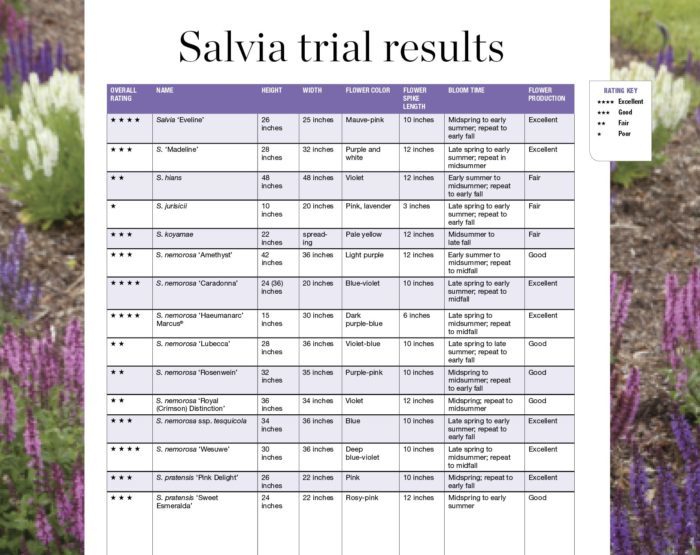 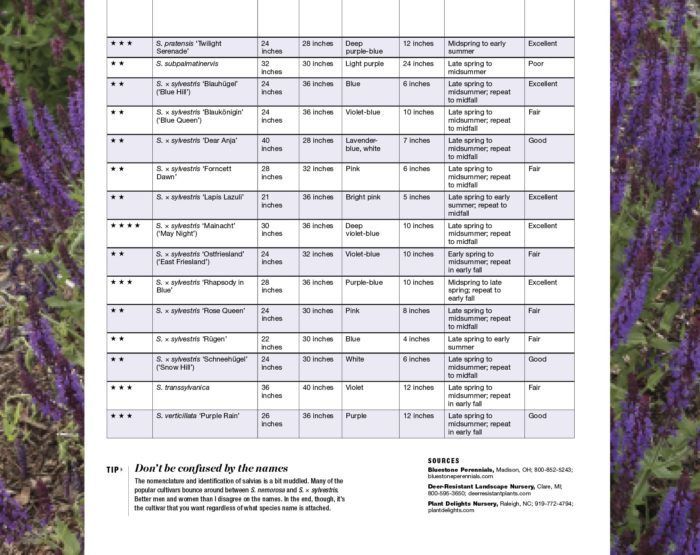