Coreopsis You Can Count On!

A while back—27 years, to be exact—the Chicago Botanic Garden created a garden solely to compare perennials, and coreopsis was one of the inaugural trials. We tested mostly seed-grown cultivars of large-flower coreopsis (C. grandiflora) and lanceleaf coreopsis (C. lanceolata), which were fraught with identity issues and ephemeral natures, but the trial also featured a handful of outstanding hardy threadleaf coreopsis (C. verticillata) cultivars such as ‘Zagreb’, ‘Golden Shower’, and ‘Moonbeam’. For many years, this small group ruled in perennial gardens.

Then, the introduction of ‘Limerock Ruby’ in 2001 took the gardening world by storm; it was instantly popular for its bold, beautiful ruby-red flowers. But excitement quickly turned to disappointment with the discovery that ‘Limerock Ruby’ was not really cold hardy. Since then, new colorful tickseeds have trickled—and flowed—into garden centers. Embracing the expanded color palette came easily, but a question loomed: Would they be hardier than ‘Limerock Ruby’?

In the midst of the frenzy of tender and hardy varieties springing up from east to west, we started a new coreopsis trial. From the beginning, there was more to trial than just the avalanche of colorful hybrids. For instance, we included a few natives that gardeners might not know well. Despite the hope of hardier options, I’m a bit discouraged that some of the new coreopsis have not proved to be strong growers or long-lived. To be honest, I think it’s best to think of most coreopsis as short-lived perennials—it makes it easier to accept the inevitable loss. However, there are varieties that stick around longer than others and put on a brilliant, disease-free show to boot.

Who can resist pie? Not me, which is why I’m highlighting one of the non-hardy coreopsis in the Pie™ series. ‘Pumpkin Pie’ (C. ‘Pumpkin Pie’) was as delectable as the seasonal pastry, with deep coppery-orange flowers dotted with red eyes. We grew this as an annual for one summer—its hardiness rating is Zones 8 to 9—and loved every minute of its free-flowering nature and tightly mounded habit, which bulked up quickly after planting. If you live in a cooler zone, grow ‘Pumpkin Pie’ in containers and mixed beds the way you would any annual, but hold off on the whipped cream.

At almost 8 feet tall and 4 feet wide, broad-shouldered ‘Flower Tower’ tall coreopsis (C. tripteris ‘Flower Tower’) is a bold statement worth making room for. In a large border or wild garden, ‘Flower Tower’ pairs dramatically with other big boys such as switchgrass (Panicum spp. and cvs., Zones 5–9) and ironweed (Vernonia spp. and cvs., Zones 5–9). Its yellow flowers are larger, its leaves are darker green, and its stems are thicker than the native straight species. I’d like to say that its colossal stems stay up all summer, but without supportive neighbors, some of the outer stems will recline. ‘Flower Tower’ starts out a bit gangly, but by the second year, the number of stems increases greatly.

Pale yellow ‘Moonray’ threadleaf coreopsis (C. verticillata ‘Moonray’) glows with a soft luminescence—it’s a sport of the popular ‘Moonbeam’ (C. verticillata ‘Moonbeam’). The mellow yellow flowers look great with deeper tones of blue and purple, and blend beautifully with pastel pinks and lavenders or silver leaves. ‘Moonray’ has a pleasing habit, forming low, compact mounds. Like other threadleaf coreopsis, its dark green leaves are divided into narrow needlelike segments, which give it a delicate fernlike look.

Not all plants have fancy names; sometimes they’re just called—well—Walter. In the case of ‘Walter’ lanceleaf coreopsis (C. lanceolata ‘Walter’), an unassuming name is attached to a rather lovely plant. Copious semidouble, golden-yellow flowers with red-blotched centers festooned ‘Walter’ for much of the summer. A reliably bushy habit marked it as one of the strongest performers in the trial. Typically, I recommend using both lanceleaf and large-flower coreopsis like annuals, hoping they seed around but not caring what type of flowers show up. But where ‘Walter’ is concerned, I liked that it did its thing year after year in the same place.

‘Sienna Sunset’ threadleaf coreopsis (C. verticillata ‘Sienna Sunset’) didn’t have an exactly perfect performance, but I like it so much, I’m including it as a top pick anyway. ‘Sienna Sunset’ is a bit of a chameleon in flower—it opens burnt sienna and lightens to apricot, but feels a little bit orange, yellow, and reddish all at the same time. With so many flowers blooming from summer to fall, there’s plenty of time to ponder the color of the moment. The only thing that kept ‘Sienna Sunset’ from being a perfect plant was some significant dying off of the crown of the plant in two winters. On the bright side, the plants bounced back pretty quickly in spring to form bushy mounds with delightfully fine-textured leaves.

For me, ‘Golden Shower’ threadleaf coreopsis (C. verticillata ‘Golden Shower’) and Russian sage (Perovskia atriplicifolia, Zones 4–9) make a pleasing pair—so simple, yet a brilliant combination of color, texture, and form. ‘Golden Shower’, also known as ‘Grandiflora’, is an old-timer in the world of coreopsis and was a consistent performer in both of our trials. The only downside to the ample 2-inch, golden-yellow flowers is that they become nasty black seed heads that must be removed. Shear the plants when the bulk of the flowers have passed, and consider seeking therapy if you try to nip each deadhead one at a time. ‘Golden Shower’ has an upright bushy habit and spreads by rhizomes to become a sizable patch about 3 feet across. In autumn, the foliage turns golden-orange to yellow with burgundy highlights—a bit reminiscent of Arkansas blue star (Amsonia hubrichtii, Zones 5–8).

A compact selection of the native star coreopsis, ‘Sunshine Superman’ (C. pubescens ‘Sunshine Superman’) has single golden-yellow flowers floating over low, broad mounds of fuzzy green leaves. Although it was unlike any other coreopsis in appearance, it stood toe-to-toe with the best when it came to its spectacular floral show. By the third year, seedlings began to pop up around the garden—the species is known as a generous reseeder. While I wouldn’t mind this behavior in a meadow garden, the seedlings were over a foot taller than the original plants, giving the display a ragged look. Butterflies and goldfinches love ‘Sunshine Superman’, but deer leave it alone.

New kids to keep an eye on 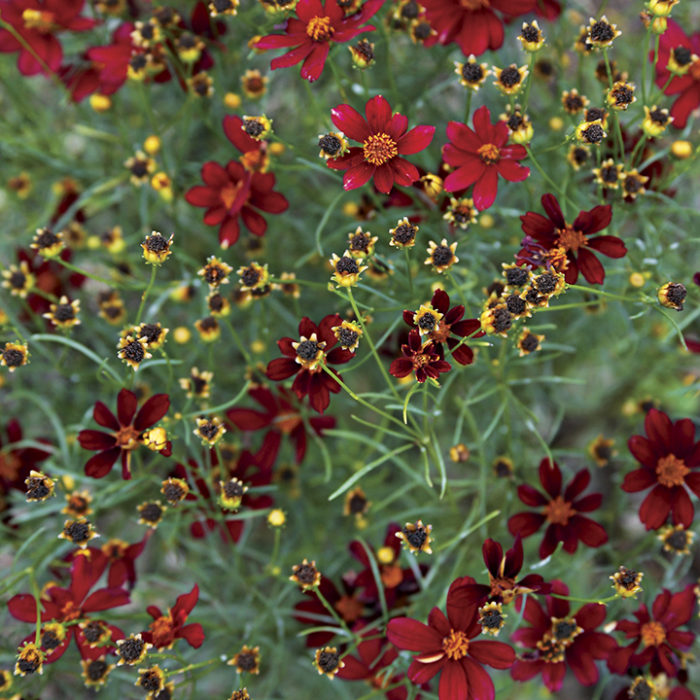 There’s no denying the allure of red—it’s lush, sexy, and seductive, whether in fashion or flowers. So naturally, I was instantly drawn to the deep burgundy red flowers of ‘Red Elf’ (C. ‘Red Elf’), a stunning new cultivar in the compact Li’l Bang™ series. In the heat of summer, the tips of the flower rays are frosted pale yellow or white, but return to fully red in cooler weather. ‘Red Elf’ has a diminutive habit, 8 to 12 inches tall and 12 to 15 inches wide. Like others in the series, ‘Red Elf’ is mildew resistant and sterile, so plants remain healthy while blooming all summer. 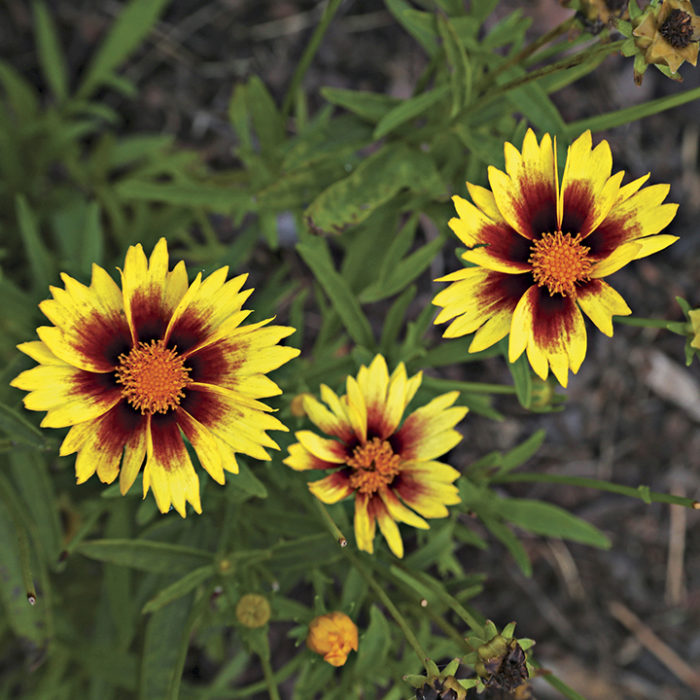 The butter yellow flowers of ‘Enchanted Eve’ (C. ‘Enchanted Eve’) feature a light red eye that expands with the onset of cooler temperatures. Its flowers are 2 inches wide with ragged tips and are pretty at any stage. ‘Enchanted Eve’, another member of the Li’l Bang™ series, is 12 inches tall and 18 inches wide. I’m impressed with this series so far, but time will tell how long these compact plants will stick around. 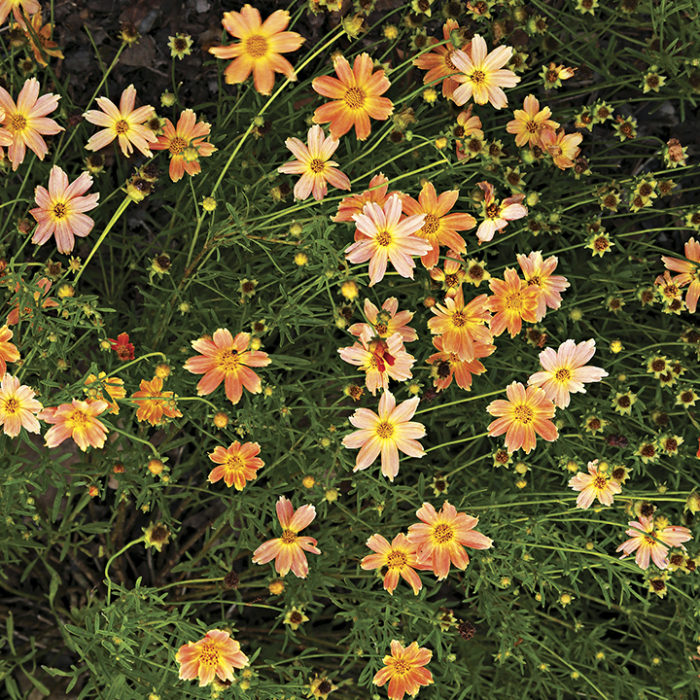 I definitely have a little crush on Crème Caramel™ threadleaf coreopsis (C. verticillata ‘Novcorcar’)—it’s probably the best tickseed I’ve grown in the past two years and certainly was the star of 2015. The orange flowers (nearly 2 inches wide) start out yellow with a muted coppery overlay and age to pinky-peach and pale red. Its terracotta-hued flowers are similar to but darker than ‘Sienna Sunset’. Beginning in early summer, bounteous blossoms blanket the plants in a delightful layering of flowers over flowers. Crème Caramel™ quickly forms bushy mounds averaging 17 inches tall and 29 inches wide. 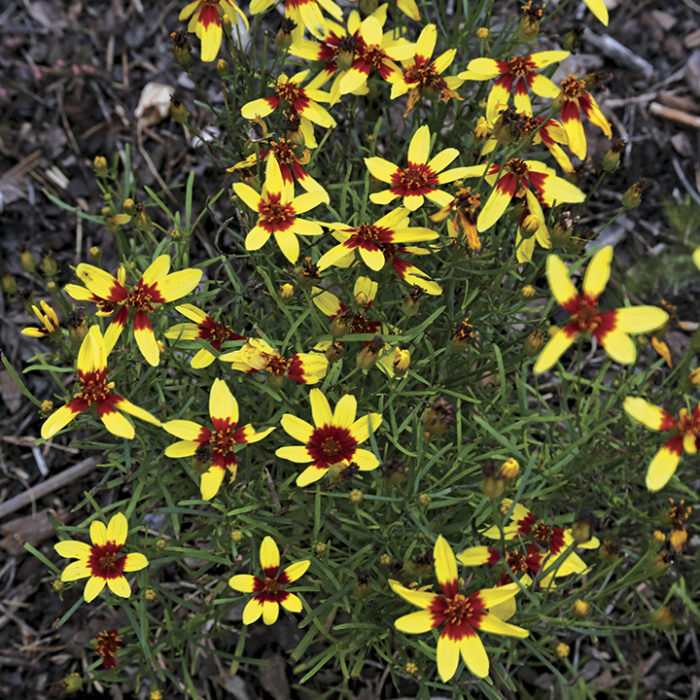 ‘Firefly’ threadleaf coreopsis (C. verticillata ‘Firefly’) is a stunning little guy loaded with bicolored yellow and red flowers from early summer through fall. The glow of ‘Firefly’ is bright, but not brassy; the center of each 1½-inch flower is deep mahogany, which forms a perfect bull’s-eye. ‘Firefly’ has a tight bushy habit and was 9 inches tall and 12 inches wide in its second summer. It comes on fast, quickly forming into perfect mounds and doing overtime on flower production. Although touted as mildew resistant, we observed serious mildew the first year but none the following year. As expected of threadleaf coreopsis, ‘Firefly’ has so far been bone-hardy.

The demands, diseases, and downfalls of coreopsis

Coreopsis are not overly picky garden plants—if you give them full sun and moist, well-drained soils. They are even drought tolerant once established. Good drainage is crucial in summer and winter because wet soils cause hardiness and longevity issues.

Powdery mildew (pictured on lanceleaf coreopsis above) can be a significant problem, especially on threadleaf coreopsis and hybrid cultivars. Good air circulation is the best defense for plants. In all but the most severe cases, powdery mildew is only a cosmetic issue and won’t kill the plants. 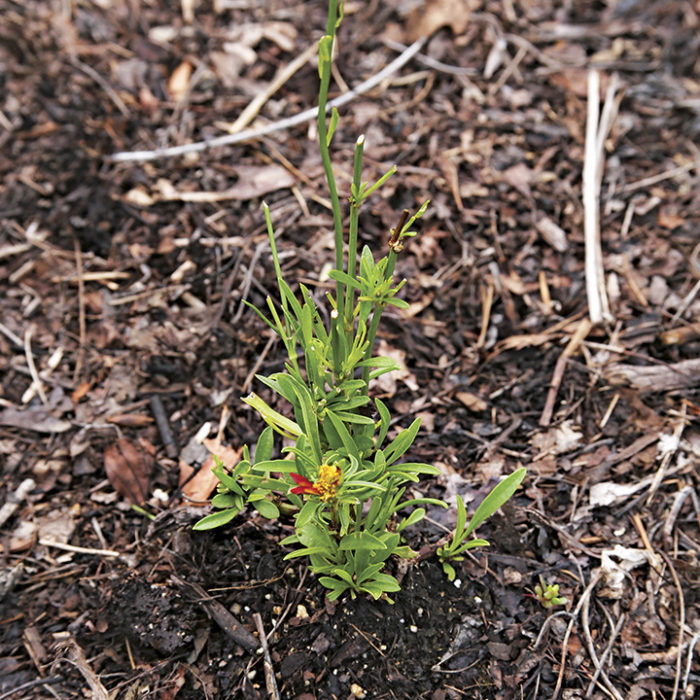 Coreopsis like their soil a little lean, so you don’t need to worry about feeding them regularly.

Deadheading or shearing after the first bloom promotes continued flowering as well as reinvigorates plants before going into winter, which improves plant longevity.

In 2015, rabbits devoured all our newly planted coreopsis (pictured); threadleaf types and hybrid cultivars were particularly succulent to them. Protect your new plants with cages, if needed.

Dividing short-lived coreopsis (C. grandiflora and cvs., C. lanceolata and cvs.) every two to three years in spring or fall may keep them around longer. Threadleaf coreopsis (C. verticillata and cvs., pictured) and pink coreopsis (C. rosea and cvs.) should be divided every three years, too, if needed—this is typically when the center of a plant is dead or the crown has become loose or thin with scattered shoots (picture Vice President Joe Biden’s hair).

Richard Hawke is the plant-evaluation manager at Chicago Botanic Garden in Glencoe, Illinois.

Dealing With a Winter That Wasn’t | Letter from the Editor

Is it snowing where you are? Here in the Northeast we’ve had a fairly mild winter so far. There has been snow, but not much of it. Temperatures have dropped…