While there are many to choose from, these five hybrid selections stand out from the crowd

February is typically regarded as the month when anxious gardeners look to the likes of Punxsutawney Phil for pronouncements on spring’s arrival. Despite the fanfare surrounding this furry forecaster, I think the loosening of Old Man Winter’s icy fingers is heralded by no finer pageantry than the flowering of witch hazels (Hamamelis spp. and cvs.). Bright, sunny days when the temperature remains below freezing tempt the sweet-scented red, orange, or yellow flowers from beneath their often snowy cloaks. As the warming rays fade into frosty nights, however, these bewitching floral skirts will retract toward the relative safety of the bare limbs, poised like a Vegas show girl awaiting her next cue. Encores might last a month, for despite their wispy, twisted, ribbonlike appearance, witch hazel flowers are remarkably durable unless conditions become too harsh or windy. In fact, it is not uncommon for plants in full bloom to tolerate temperatures in the low 20s for several days.

• This genus of small trees and shrubs contains five species and close to 100 cultivars, which are native to Asia and North America.

• Depending on the species or cultivar, the fragrant flowers come in shades of red, yellow, and orange. Bloom time ranges from fall to late winter.

• Most are hardy in USDA Hardiness Zones 5 to 8 and prefer well-drained, loamy, acidic soil and full sun to partial shade.

• Flowering is most profuse when they are grown in full sun. Use a noncompacting mulch to keep the roots cool and moist, as they are subject to drought stress.

• Plant them in the spring or fall and give them plenty of room, since they can reach up to 15 feet in height and width.

• Pruning should be done after flowering but before summer so that flower buds for the following year have time to form.

Witch hazels perform best when planted in a moist but well-drained, loamy, acidic soil. They do not flourish in heavy, wet, and compacted soils and are subject to drought stress. Remember to allow them the room to reach 15 feet tall and wide after 20 years. Selective pruning of branches can maintain a smaller size. This should be done after flowering but before summer so that flower buds for the following year can form. Flowering is most profuse when the trees are grown in full sun and mulched to keep the roots cool. Flower size and the duration of bloom are likely to be reduced during years with hot, dry springs. Deer will eat witch hazels, and some cultivars may be susceptible to leaf blights and mildew.

Hybrid witch hazels are generally hardy in USDA Hardiness Zones 5 to 7. North and west of Chicago, harsh winters and alkaline soils are likely to make growing them a challenge. Conversely, gardeners living along Zones 7b to 8b can find warm winters to be a problem. All witch hazels need a chilling period of a certain minimum number of hours below 45°F before they will flower. Instead of flowering in late winter, southern plants can be delayed until spring is well underway, at which time the floral display is likely to be brief, partial, and outperformed by companion plantings. Chilling requirements are variable in cultivars, and those with the shortest chill periods probably will perform better in the Deep South.

All four major species of Hamamelis are tolerant of partial shade and valued as large shrubs or small trees that flower when few other plants are in bloom. All are fragrant to some extent, though some selections are so intoxicating that they saturate the calm winter air. Common witch hazel (H. virginiana, Zones 3–8), native to the eastern United States, presents its faintly scented yellow flowers just as the nearby hardwood trees are losing their autumn leaves. The astringent witch hazel is distilled from the bark of this plant.

More shrubby and native to Missouri and Arkansas, the Ozark or vernal witch hazel (H. vernalis, Zones 4–8) might be blooming by Christmas in a mild winter. This plant’s yellow- to-reddish flowers are usually the smallest but most profuse within the genus, with a fragrance that ranges from delicate to a bit husky.

In the early 1920s, Boston’s Arnold Arboretum happened upon a cross of the two Asian species, producing hybrids now classified as Hamamelis × intermedia (Zones 5–9). At about the same time, similar hybrids were appearing in European collections with differences in flower size and color, time and profusion of bloom, fragrance, leaf retention, fall color, and plant habit.

Most witch hazels can add something to the winter landscape, and they all get better with age and stature. To my mind, there are very few bad selections, but a number of hybrids stand out. Here is a short list of my favorites.

H. × intermedia ‘Arnold Promise’ is an end-of-season, light-yellow-flowering hybrid introduced by the Arnold Arboretum almost 40 years ago. One of the first American selections ever made, it remains one of the best. ‘Arnold Promise’, with its vase shape, is richly scented and usually displays a mixture of yellow, red, and orange fall foliage.

H. × intermedia ‘Barmstedt Gold’ produces modestly scented flowers in a dark yellow that really stands out against an evergreen background. Its petals are more than an inch long and quite feathery, and fall leaf color is yellow. A vigorous, spreading cultivar from Germany, it may be a bit difficult to find but is worth hunting down.

There are far fewer red cultivars than there are orange or yellow. H. × intermedia ‘Diane’, introduced by Belgium’s Arboretum Kalmthout, has been the benchmark for dark-flowering witch hazel hybrids for many years. Fading to rich copper tones, this variety’s deep red color does vary in intensity from year to year. Like most red-flowering selections, its scent is very faint. The petals are broad and about 1 inch long. Fall color can be a vivid mixture of red, yellow, and orange.

H. × intermedia ‘Jelena’ is another vigorous-spreading selection from Arboretum Kalmthout. The stunning copper-orange flowers are about 1 inch long with a very faint scent. Fall color is orange-red. 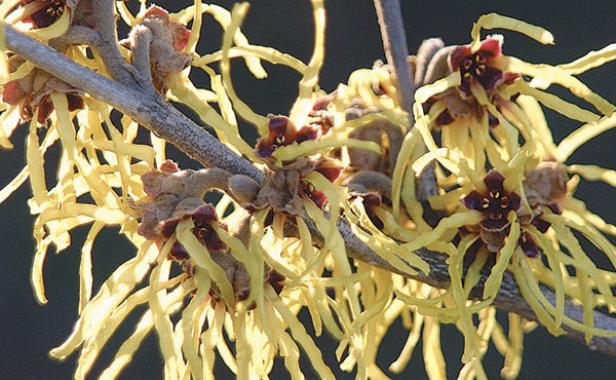 H. × intermedia ‘Pallida’ is a low, wide-spreading, early-flowering cultivar introduced by the Royal Horticultural Society. The flowers are paler, larger, and more sweetly scented than those of ‘Arnold Promise’. Fall color is yellow. ‘Pallida’ is a plant whose perfume I try to hold in my memory as long as possible. On occasion, I have purchased greatly inferior plants mislabeled as ‘Pallida’, but the authentic selection is one of my favorites.

No matter what, I know I can count on witch hazels to brighten the late-winter landscape with their wispy, sweet-smelling yet tough blossoms. They’re nature’s invitation to spring.