Everyone has heard some trick to keep a bloom-filled vase beautiful. We find out which ones really work

One of the great joys of gardening is taking beautiful blooms from favorite plants and placing them indoors to brighten a room. Cut flowers, however, can quickly lose their beauty. A quick internet search yields a wide variety of methods claiming to prolong the life of cut flowers. Most of the methods involve adding something to the water in the vase, usually items found in the average home: bleach, lemon-lime soda, vine­gar, and others. Many recipes combine two or more ingredients intended to add food and delay decomposition, and include cultural practices, such as trimming stem ends at an angle under running water as well as refreshing the water every two days and retrimming the stem ends. It quickly becomes overwhelming.

I confess that I am a bit of a lazy gardener. For cut flowers, I arrange them in a vase, add water, and throw them out individually when they start to look bad. Cutting the stems at an angle (a common practice) and adding a little something when they first go into the vase seem reasonable to me, but I’m not going to do much more than that. Most home gardeners whom I’ve met seem to be willing to expend about the same level of effort. So with that in mind, how do the household additives or plant-food packets compare with just plain water? I decided to conduct an experiment to find out.

In the end, were the results enough for me to change my lazy ways? For cut flowers from a store that come with a packet of plant food, absolutely. But at home, with flowers from my garden, most likely not, unless a special occasion necessitates it—a really long special occasion. Fortunately, I live in a region with a long growing season and have a lot of flowers to replenish my vase.

How the test was done

I set up an experiment at the UNC (University of North Carolina) Charlotte Botanical Gardens to test six additives against plain water. These treatments were recommended on multiple websites, and they include sugar for food plus an antibacterial agent—the two things that cut-flower preservatives are designed to supply. I used freshly cut flowers to best mimic a gardener’s experience and because store-bought flowers are often pretreated in some way. I recorded data daily for 15 days on the quality of the flowers and rated them with a number system: 2 was “good,” meaning they looked like I had just picked them; 1 was “acceptable” in that they were good enough to keep in the container; and 0 meant that they were wilted or shriveled to the extent that they needed to be removed.

Results: Plain water was great in overall quality—up to a point (average of 7 days)—but began rapidly declining soon after. The water in the container stayed fairly clear for most of the experiment, and the flowers lasted nearly as long as those treated with FloraLife Flower Food 300.

How much: 1 Tbs. sugar and 2 Tbs. vinegar per quart of water

Results: This treatment produced the least favorable results, with flowers starting to wilt by day 2. Stems started turning brown at the bottom and moved upward toward the flower across all flower types—the quickest being the sunflowers. I attribute this to the sunflowers’ large stem size, which absorbed the treatment faster than the other flower types. Lisianthus took the longest to show impact, which I believe supports my theory.

Trial Days vs. Average Rating—Cut Flowers in Sugar and Vinegar 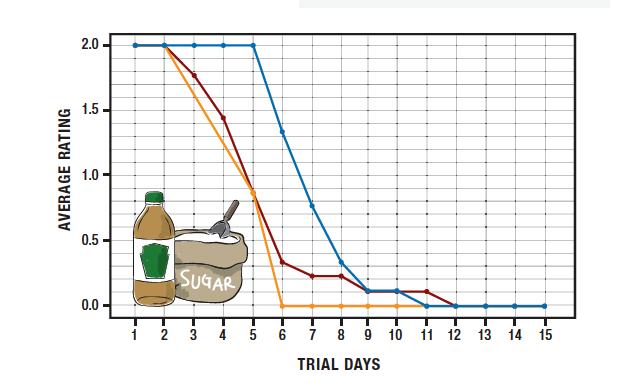 How much: 1 Tbs. per quart of water

Results: The flowers did well overall until about day 6, which is when I noticed leaves beginning to wilt on some of the celosia stems. The same eventually happened across all the flower types. The flower petals themselves did not appear to be affected. So the flowers lasted, but they didn’t look great over the long haul (or as good as those treated with FloraLife). 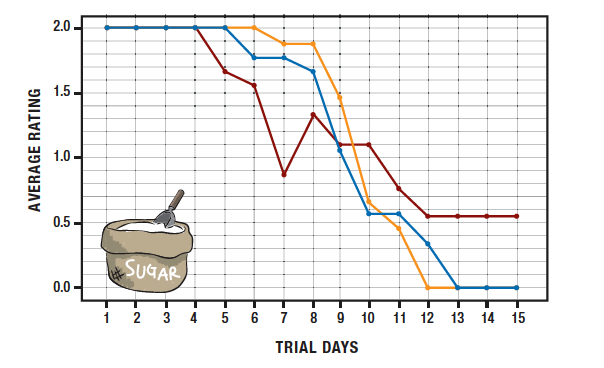 How much: 1 Tbs. sugar and ½ tsp. bleach per quart of water

Results: While the flowers generally managed to last through the duration of the experiment, I noticed brown spots and blotching on the leaves. This is what affected the overall quality. The flower petals seemed unaffected by the bleach. The container water stayed pretty clear throughout the experiment. 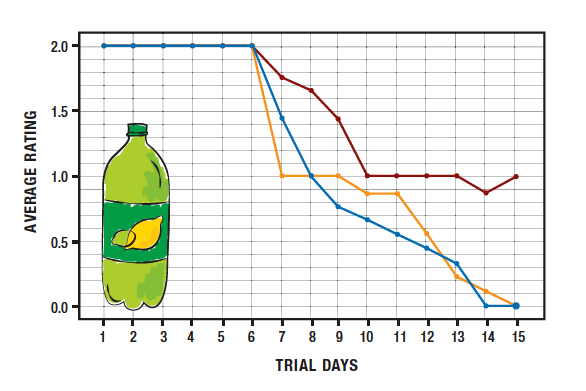 How much: 1 Tbs. per quart of water

Results: The benefit of using Listerine is its antibacterial qualities. This treatment had a similar result as the plain water control group: It did well up to a point, then declined rapidly. The downside with this treatment was that I could smell the Listerine without having to put my nose up to the container, masking any pleasant fragrance from the flowers. 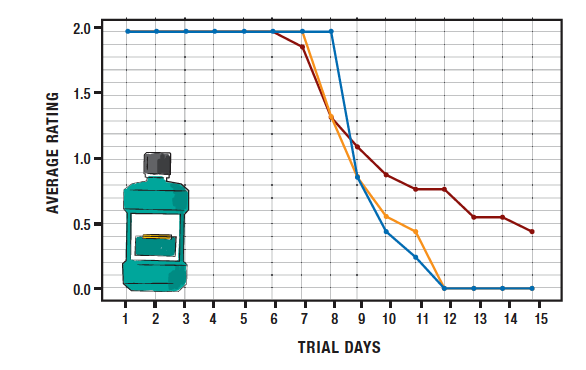 How much: 2 tsp. per quart of water

Results: Flowers treated with FloraLife Flower Food 300 lasted the longest and looked the best—and the water remained clearest. The ingredients in FloraLife are proprietary, but the company’s website describes this product as containing “a sugar for nutrition, an acidifier to lower the pH of the water, and a class of compounds called stem absorption enhancers.” 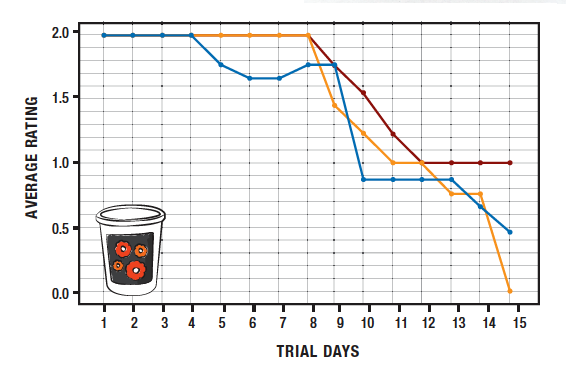 Mae Lin Plummer provides community education and horticultural workshops for the UNC Charlotte Botanical Gardens. She is also the owner of The Laughing Garden, a landscape-design and horticulture-consulting company in Charlotte, North Carolina.