It is time to order bulbs for next spring. In fact it has been that time for a while and I have rather failed to get round to it until now – efficiency and timekeeping are not always my strongpoints. I order lots of bulbs for different clients: everything from Crocus to Camassia and Tritelia to Tulips.

Which brings us very neatly to the point of today’s blog – the noble Tulip.

All Tulips descend from small species varieties that ramble across the stony slopes and hills of southern Europe and Arabia. These species (and their hybrids) are often ignored by gardeners: this is a mistake as, although they are small and puny (most are only 15cm high) in comparison to most of their descendants, they tend to flower a bit earlier and, en masse, or grouped at the front of borders they are entrancing.

The Tulip was first introduced to Western Europe by, so the story goes, by the German Ambassador to the Ottoman Empire. Oghier Ghislain de Busbecq in the sixteenth century. He was an energetic fellow who is also credited with introducing the eager Europeans to the Angora Goat. Eventually, Tulips ended up in the Netherlands where the Dutch took them to their hearts. So much so that, in one of the less sensible periods of their history, it led to the massive speculation and excitement of Tulip Mania when the value of certain bulbs rocketed from a bit pricey to completely ridiculous – at one point a single tulip was traded for goods worth 2,500 florins, at a time when you could get a tonne of butter for 100 florins, four oxen for 450 florins and a skilled labourer earned 150 florins in a year. It was a short lived mania (less than a year) which eventually collapsed very swiftly leaving many people out of pocket.

Even today the Dutch lead the way in breeding and developing Tulips. In the spring the acres and acres of bulb fields will be in full flow and drawing the attention of eager coach tours from across the continent, at this time of year it is all in the planning. At the Keukenhof Gardens they will plant somewhere in the region of five million of them over the next few weeks. The full range of colour and shape is laid out in row after row of flower stretching away into the distance. Although spectacular, many might find the experience a bit overwhelming, in gardens it is often best to interweave Tulips among emerging perennials or under deciduous shrubs rather than lining them up like imperial guardsmen.

If you are wise with your choices you will be able to have tulips flowering from March until the nether reaches of May, they cater for all tastes from the restrained and elegant to the wildly over the top. The most sophisticated are probably the Lily flowered varieties which have gracefully pointed petals. They range from the creamy white of T.White Triumphator and the soft orange of T.Ballerina (which also has the advantage of smelling of boiled sweets) to the clear pinks of T.China Pink or T.Lilac Time. There is a yellow version called T. Westpoint which is fine except that ,to be honest, a yellow tulip is a bit of waste of time and space.

This is an unashamedly prejudiced view that based on the fact that, after the onslaught of daffodils, we have had quite enough yellow to last a few months. 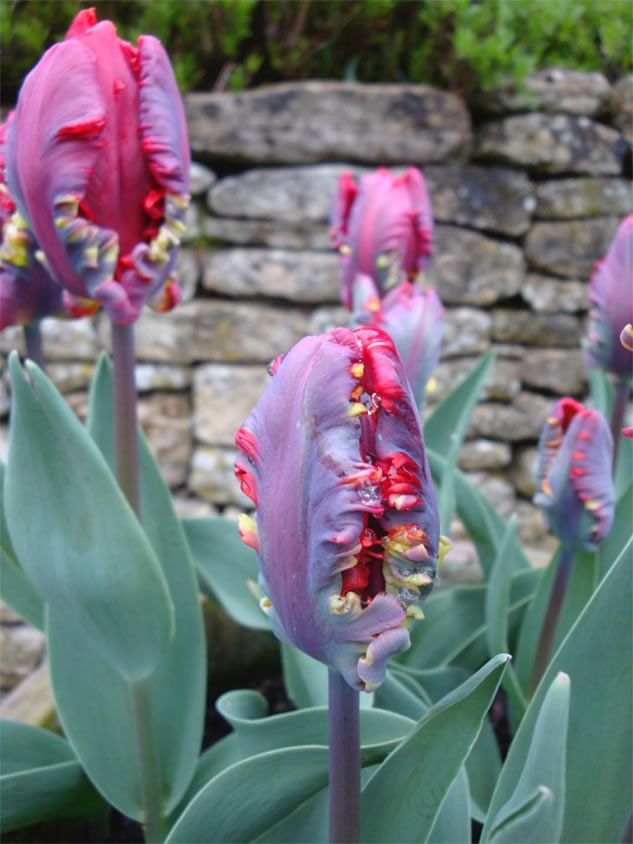 At the other end of the scale are the ludicrously overdressed Parrot tulips like the exuberant Estella Rijnveld which looks like a lightly thrashed raspberry mousse (and used to delight in the name Gay Presto until some bulb grower somewhere lost his sense of humour). Occupying the middle ground are bewildering number of constantly changing choices, tulips with fringes, tulips for rockeries, tulips for mass bedding, tulips for pots, multiflowered tulips and even tulips with great foliage.

Now is the time to get out there and decide on your favourites. One of the most important things to remember when choosing tulips is that quantity is very important: ten tulips in a container can look wonderful, Ten tulips in a border will look pathetic. Their magnificence will be drowned out by their surroundings. It is important to give them the chance to stand centre stage and get their correct amount of applause – think in hundreds, plant them in groups of at least ten and never mix colours in one group.