As I mentioned in a previous post we will be spending some time this winter spotlighting various new collections of Garden Roses you can easily purchase for your own garden.  This will give you some pre-knowledge before you walk into the garden center next spring and are seduced by all the beautiful flowers!

In this post, however, I’d like to give you some idea on how these new generations of roses are being tested before they even get to your garden.  Many of these tests/trials give awards that are part of the roses’ advertisement and knowing how the trials are conducted is also valuable rose buying information.

A little background.  Testing of roses usually goes on for several years before they even get to the market.  The idea is for the breeder, or grower, to get a good idea how well the rose will grow for you once you purchase it.  So ideally the tests, or trials, should be run in a way that closely replicates how you would grow them?

Yet, this was not always the case.

The popular trials over the last few decades were the All American Rose Selection Trials, or AARS trials.  These were conducted in over thirty public rose gardens around the country.  But for many years they sprayed their test roses with chemicals.  Maybe it’s just me but that hardly seems like a good way to test a rose for future release.  To their credit a few years ago they did decide to stop spraying the test roses.  The result?  The vast majority of the “test” roses did poorly.

And you wonder why they did the same in your garden!?

I’m not singling out only the AARS trials here.  Other “tests” were similarly conducted.  And while the AARS trial is reorganizing itself into a different format, to their credit they will not be spraying in the future.  And that is good.

Started just last year the Trials are being conducted on the grounds of the Biltmore Estate in Asheville, NC.  They take place in the walled rose ground just off the main house.  A truly stunning setting for such a trial.

Entries are submitted from around the world and judged for two years, but not just on their flower.  They are also judged on disease resistance, growth habit and vigor, recurrent bloom and fragrance.  That’s right fragrance in roses.  Who would have thought!!  A permanent panel of judges scores them four times a year during different seasons for a total of eight times.  At the end of the trial an International Jury comes in and scores them as well.  At the end various awards are given in different categories.

At the Biltmore Trials even the public can get in on the act.  In front of each trial rose there is sign explaining how anyone can vote for roses they like simply by texting in their vote.  The rose with the most votes will win the Biltmore Guest Choice Award at the end of the two year trial period.

Yours truly is the coordinator of the Biltmore International Rose Trials and from day one we all agreed this was going to be a non-chemical rose trial.  Instead, we use environmentally friendly products much in the way you would use them in your garden.

Other Trials around the country are also being conducted in a similar manner and as time goes on we’ll talk about them.  I think it’s important that you the rose buying public understand what is behind the Trials.  This way when you see a rose advertised as having won an award from one of them, you will know if that rose was tested similarly to how you will grow it in your own garden.

So if you get up the Biltmore Estate check out the roses in the trials.  And participate by texting in your vote! 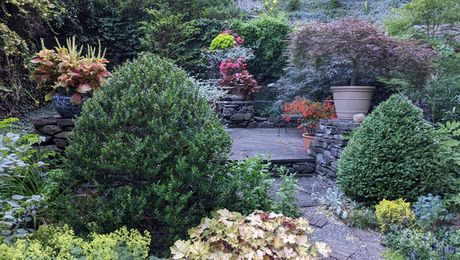