Sorghum and the Making of Sweet Syrup

Sweet sorghum syrup, also referred to as sorghum molasses, sorgho, or sorgo, is made by boiling the sweet juice of the sorghum cane.

For the next few weeks, I will be writing from the Ozark Mountains in Arkansas. I am here with herbal friends that live in the area, working on various projects, giving presentations, and attending the Fall Harvest Festival at the Ozark Folk Center. Next weekend I’ll be cooking beans at the BeanFest, not to mention enjoying the glorious fall colors.

This past weekend I had the pleasure to meet a local sorghum farmer and maker, Benson Hardaway, and learned so much about the making of sweet sorghum syrup that I thought you gardeners would like to hear about the process.

Sweet sorghum syrup, also referred to as sorghum molasses, sorgho, or sorgo, is made by boiling the sweet juice of the sorghum cane (Sorghum bicolor, formerly known as Holcus sorghum).

Sorghum syrup is not derived from the sorghum grain or from sugar cane. And while it is often referred to as molasses, molasses is a by-product of the sugar industry–it is what is left when the granulated white sugar is removed.

While they are mostly grown commercially for making sorghum syrup, the stout, corn-like sorghum plants are handsome and interesting horticultural grasses with plume-like tassels. Members of the Poaceae family, related sorghum have been grown for centuries for grain, syrup, brooms, and forage crops.

There are many varieties of sorghum. They can be divided into three groups: sugar sorghum for making syrups; the broom corns used in making brooms; and forage grasses. Among the latter is Johnson grass, which can become an invasive weed. In its native Africa and when it arrived with the colonists in the 1700s, sorghum was often grown for its panicles of fruits that were dried as used as an edible grain; though we don’t see it used this way very often nowadays.

Sorghums like sandy soil or garden loam, and need to be cultivated and kept free of weeds like corn. They like a long, hot summer. Some of the varieties of sorghum can get as tall as eight to 15 feet, so these larger canes need to be grown in rows at least six feet apart. The plants take 120 days to mature.

Once mature the leaves are stripped from the canes in the field, which is a labor-intensive task. Removing the leaves before cutting increases the yield of syrup and supposedly, the quality of the syrup is superior in flavor. Then the canes are cut at ground level with a machete or similar tool and stacked in piles. The seed heads are harvested. The best ripe seed is saved for planting. The nutritious grain is fed to chickens. They need to sit for at least 4 or 5 days so the enzyme that turns starch into sugar can have time to work; they can sit for as long as 2 weeks. Much of this process depends on the weather.

The cane is then fed into a sorghum mill or press, which crushes the cane. The juice, which is a light green color, is caught in buckets. The spent cane (which is referred to as pumee) is fed to livestock.

At the Ozark Folk Center, they have an old-fashioned sorghum mill which is turned by a donkey. Their tray for boiling down the syrup is primitive and is designed to be heated over a wood fire so there is a stone chimney. The tray is first filled with water, which is brought to the boil and then the cane juice is poured into the tray. The tray, which is adjusted to be slightly inclined uphill, has little channels and the juice is cooked to make sweet syrup. The syrup is pushed with flat tools uphill and the water evaporates; then the syrup is skimmed. Finally, the sticky syrup is poured or ladled from large containers into jars. 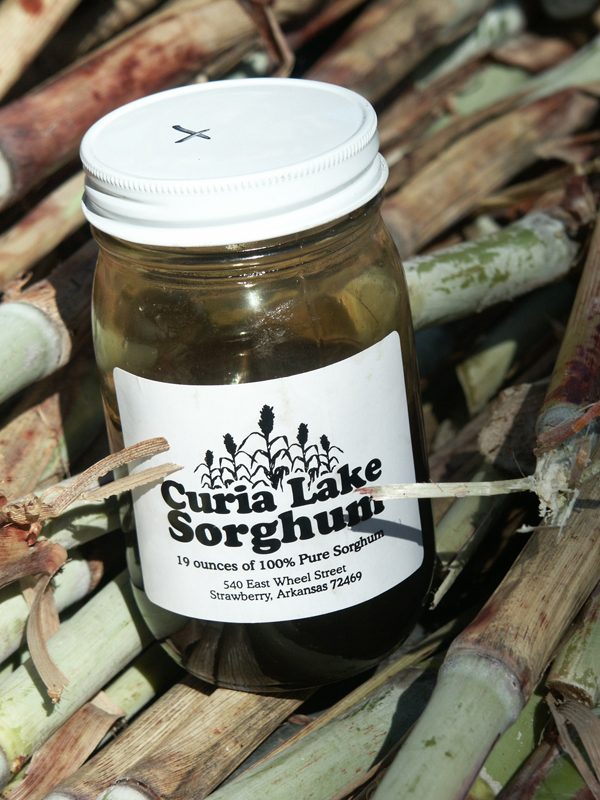 Since it contains iron, calcium, and potassium, sorghum is good for you–unlike other liquid sweeteners like high fructose corn syrup. Read labels to be sure that you are buying a pure sorghum product, not one with added sweeteners. Sorghum syrup is sweet, yet it has a little sourness and a slight bitterness; it is not as sweet as maple syrup or honey. Often, sorghum was called “long sweetening” while sugar was called “short sweetening.”

The best way to eat sorghum syrup is on a hot biscuit or cornbread. 🙂 It is also good with seasonal fall produce like squash, pumpkin, apples, pears, persimmons, and pecans. It can used in pies, puddings, cakes–any baked good–and it makes great barbecue sauce, baked beans and chili. Or try some sorghum syrup on this hearty, toothsome cornbread for a wonderful tasty treat!

If you are interested in ordering real homemade sorghum syrup grown and made in the Arkansas Ozarks, contact Benson at [email protected]. His Curia Lake 100% sorghum is finger-lickin’ good!

My name is James Rail, an American, who has been living in Gardaber, a suburb of Reykjavik, Iceland, for almost 60 years. Obviously, gardening conditions in Iceland are different with…