Sometime during the late 19th century, someone decided to bring the Asian shrub winged euonymus (Euonymus alatus) to the United States. It grows quickly, and in fall, the leaves turn cranberry red. It’s pretty but horribly invasive. Thousands of them, some as tall as 10 feet, have clogged the undergrowth and property borders at my home, robbing the native ferns of moisture and sunlight.

I’ve cut back the euonymus and tried yanking it out by the roots, assuming the stance Christopher Robin used to pull Pooh Bear out of Rabbit’s hole after the bear ate too much honey. But the stems of euonymus are brittle, and when they’d break, I’d land on my seat. Besides, the stuff is tenacious. There had to be an easier way that didn’t involve poison, fire, farm machinery, or lots of shovel work.

Physics came to the rescue in the form of root pullers. All operate in the same way: When you push down on the tool’s long handle, levering it toward the ground, two jaws grip the shrub around its base. The harder you push, the tighter the jaws grip, wrenching the plant from the earth—roots and all. These tools are simple, relatively inexpensive, and satisfying to use.

I tested three different root pullers—the Pullerbear, the Extractigator, and the Brush Grubber—on the dreaded euonymus and on other invasive plants: lilac (Syringa vulgaris), Japanese maple (Acer palmatum), and Japanese barberry (Berberis thunbergii). You may have a different battle on your hands, but take a look at these three tools. One of them might be just what you need in your battle against woody invasives. 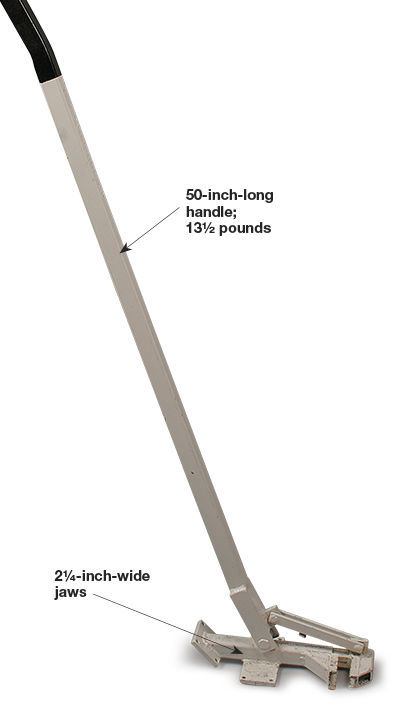 The Pullerbear Grip XL is brutishly effective at prying shrubs out by their roots. It’s not a delicate tool, although it does take a little finessing to position the jaws around the shrub’s base. The serrated jaws grip like a pit bull, except on the slimy underbark of barberry bushes. The company will weld your name or other words on the handle free of charge. (I’d go for “Die, Euonymus, Die.”)

In soft ground, such as the leaf-littered forest on my property, the plate has a tendency to push into the earth, negating the tool’s efficacy. The manufacturer recognizes this and provides a short instruction sheet for bolting a larger piece of wood to the plate, which increases its footprint, preventing it from sinking. Rather than go to the trouble, I carried a short board with me with all three tools and slipped it under the steel plate when needed. The top of the handle is coated with sand paint to provide a good grip, and there’s a lanyard for hanging up the tool when it’s not in use. 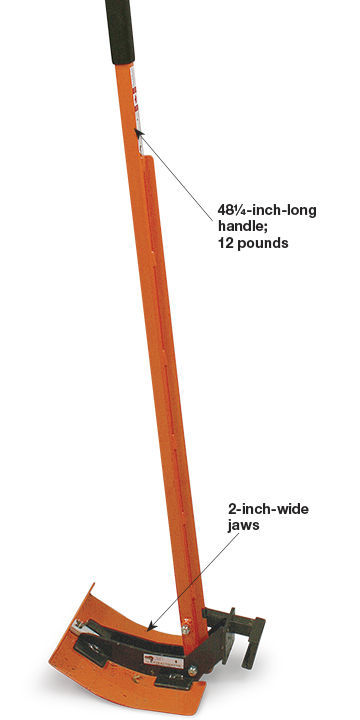 The Extractigator is similar to the Pullerbear with some notable differences.

The international orange color makes it hard to lose in the underbrush after setting it down. A real advantage is that the Extractigator jaws fall open and are ready to use when you lift the tool. (On the Pullerbear tool, opening the jaws requires pushing the handle forward once the base is resting on the ground.)

The BigFoot accessory (Can$23.93), made out of aircraft-grade aluminum, bolts to the bottom of the tool to increase its footprint, similar to adding a board to the bottom of the Pullerbear model. (I found that my short board worked better than the BigFoot.) The jaws grip even the smallest stems; I was able to grab onto a tall thistle and pull it from the ground without the jaws slipping.

Cost: Can$154.94 (plus shipping and handling); extractigator.com 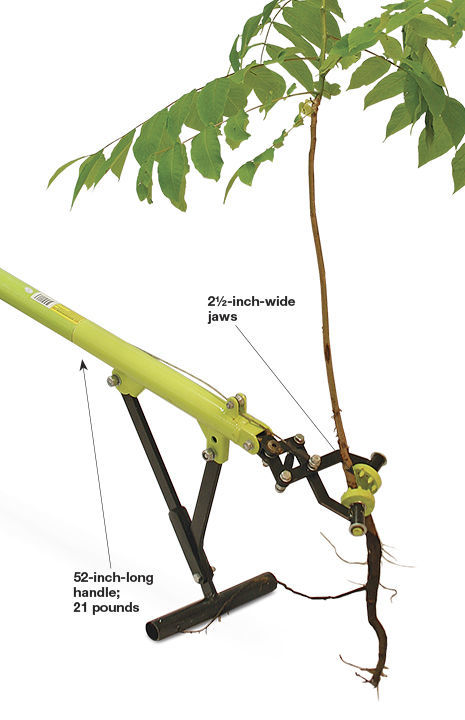 I tried the Fiberglass Ironclad Handle Brush Grubber, model BG-03. It is more mechanically complex than either the Pullerbear or the Extractigator. The Brush Grubber is the heaviest of the bunch; at 21 pounds, it gives you quite a workout. A pivoting T handle uses a thin steel cable to clamp together two circular, spring-loaded, vicious-looking, eight-toothed jaws reminiscent of a medieval morning star. (On a horrifying note, the tool’s instructions warn that it “is not to be used on people or pets.” Good thinking!)

The Brush Grubber, painted a hard-to-lose fluorescent green, has a bolted-on, Y-shaped outrigger that you push down on for leverage. Unlike the jaws of the Puller­bear or the Extractigator, which would occasionally slip on slimy bark (of barberry, for instance) and require repositioning for another try, the Brush Grubber held on like a determined alligator. The jaws never slipped.

Cost: $129.99 (plus shipping and handling); brushgrubber.com

All three tools are brutally effective, but they do require muscle to operate. Their lever/fulcrum action adds considerable shrub-pulling power—much more so than you could exert by grabbing the trunk of a shrub with your bare hands—but all the tools will give you a workout. My favorite is the Extractigator because the jaws fall open when you lift it. The Pullerbear gets second place. The Brush Grubber’s complexity, weight, and number of moving parts make it come in third, which is not to say that it isn’t a good tool. Just remember to keep it away from the kids and the cat.

Jefferson Kolle, while trying to figure out what he wants to be when he grows up, has been an oil-field roughneck, bail bondsman, carpenter, college instructor, magazine editor, and professional pearl diver. He now writes in Bethel, Connecticut.