If You’re Not Growing Geums, You’re Missing Out

They’re uncommon and good looking, and they shine at a time when not much else does. What more could you want?

It was a late-spring morning, outside the Indianapolis Museum of Art, when I first consciously noticed geums (Geum spp. and cvs., USDA Hardiness Zones 3–9). It was shocking to see a plant with startlingly bright flowers—other than tulips—in the midst of the pastel spring landscape. For years after this encounter, I wondered why I didn’t see many geums in local beds and borders. Were they too “hot” for the average gardener to handle? After all, these plants do flaunt their smoldering reds, simmering oranges, and fiery yellows at a time of year when softer hues reign supreme. While I think there may be some gardeners that stay away from geums because of their hot-color palette, there is a more obvious reason why they are so rare in gardens: competition.

May is a chaotic jumble of options at the nursery, so many spring-blooming perennials, like geums, simply get lost in the mix. But if you never again want to have a lull in the garden between spring and summer, daringly buck convention and plant one of these low-maintenance jewels. Just be sure you select a cultivar that is long blooming and hardworking because not all geums are built the same.

In my eyes, ‘Sangria’ is the quintessential geum: Its flower color isn’t just hot—it’s scorching. The lusty scarlet blooms, which look like miniature roses, are borne profusely for most of late spring and often throughout the entire summer. The mound of foliage tops out at 16 inches or so but the long-blooming, semi-double flowers stand almost 2 feet taller. Its exuberance is irrepressible and dazzling, even on a cloudy day.

‘Fuzzy Navel’ is a heavy-blooming geum with a unique look. In midspring, the nodding, semi-double, bright yellow flowers begin an impressive show that runs into midsummer. The flowers are on the small side but make up for it in quantity—proof that bigger isn’t always better. ‘Fuzzy Navel’ was reliably hardy and uniform in habit, with leaves remaining evergreen throughout most winters.

Red is a forbidden color in my home garden, so I need to get my fix elsewhere. Thankfully, I can always count on sultry ‘Flames of Passion’ to sate my appetite. Its blossoms face upward for maximum showiness. (Be forewarned: There’s no bashfulness with this plant.) The semi-double flowers are only an inch across but bountifully borne on swarthy stems.

Single-flowered ‘Cherry Cordial’ looks like it might have water geum (G. rivale) in its background due to its nodding flowers with colorful sepals. The orangey red blossoms, capped with a reddish purple calyx, are exceptionally showy. ‘Cherry Cordial’ blooms freely from midspring to midsummer, making it one of the longest-blooming geums. 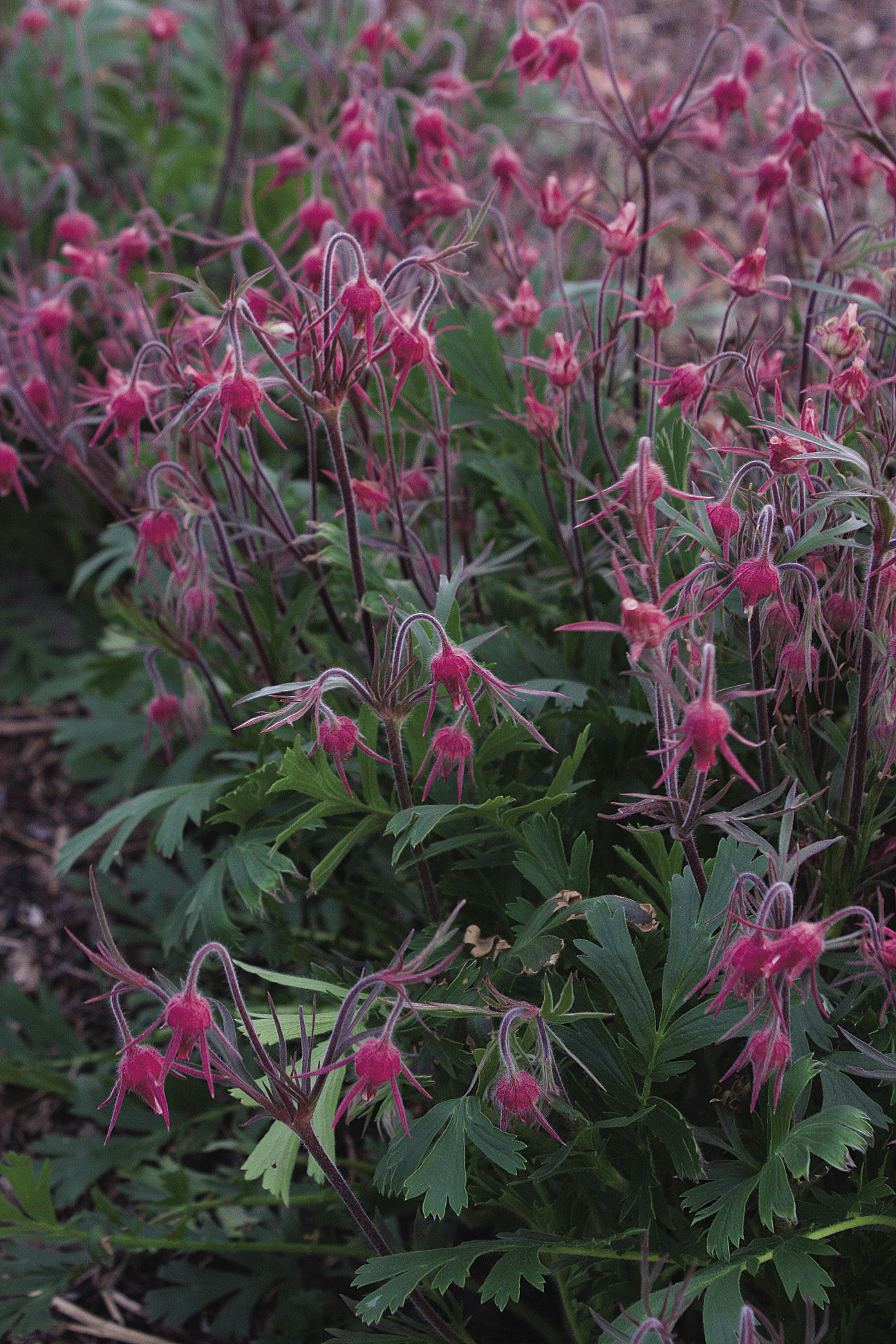 I was fascinated with the fuzzy fruit of prairie smoke in my childhood, long before I ever grew it or learned it was G. triflorum. Its curious flowers, nodding like a shepherd’s crook, hide creamy white petals beneath spurred, rosy pink caps. As the seeds mature, the feathery tails lengthen, becoming silvery and pink and looking like puffs of smoke floating above the plants. The ferny leaves, strongly dissected into many leaflets, stay attractive as long as the plants are kept moist. Despite their affinity to moisture, we’ve had great success growing prairie smoke on the green roof of the Chicago Botanic Garden, where it has flourished in as little as a 4-inch depth of growing medium—a testament to its toughness. 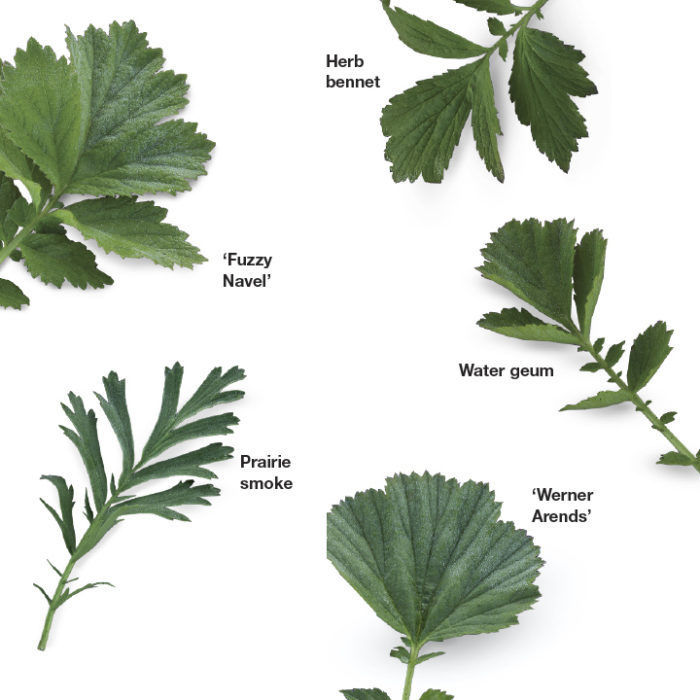 It’s not surprising that geum blossoms sometimes remind people of miniature roses because they belong to the same family. The five-petaled flowers, often with a central cluster of golden stamens, may be upward facing to nodding. The most notable of the nodding flowers are seen with water geum (G. rivale) and prairie smoke (G. triflorum), which hide their understated petals within colorful, cup-shaped bracts. The flowers are held on wiry, leafy stems above the foliage. The more traditional geum flowers may be single, semi-double, or double in hues of orange, yellow, or red. While hot hues are typical, a number of new cultivars come in softer shades of these core colors. 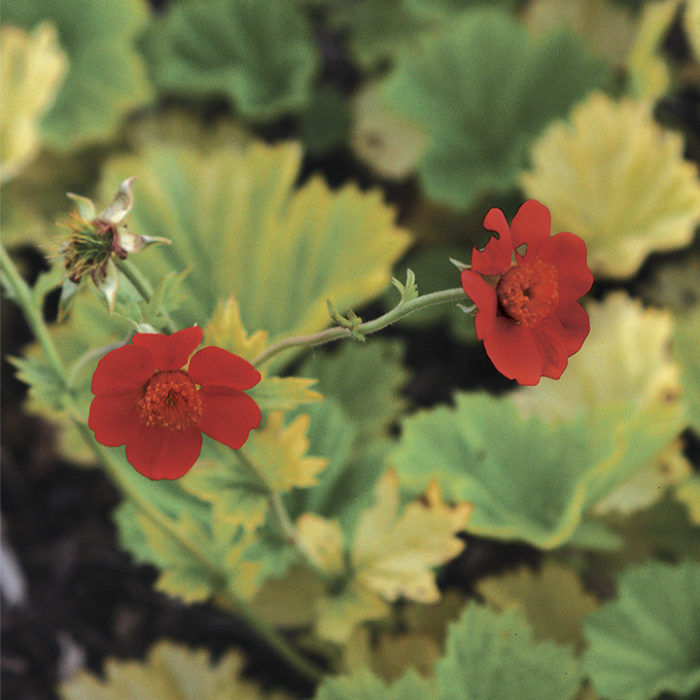 The foliage is almost as cool as the blooms

Geums form rosettes of bold, hairy green leaves. Many cultivars are hybrids, so there is no cookie-cutter uniformity to the highly variable foliage. Mounds of foliage range from 6 inches to a foot or so tall without flowers. ‘Eos’, named for the goddess of the dawn, is a golden-leaved cultivar grown primarily for its unique foliage. For us, ‘Eos’ had deep yellow leaves in spring, but they quickly turned yellow-green and then often bronzed or burnt by midsummer. ‘Eos’ was also shy to flower, producing about three flowers per year. I still have hope, though, that if ‘Eos’ had been grown in afternoon shade, we would have been able to appreciate fully its luminous character.

Keeping them happy and healthy is fairly easy

There are about 50 species of geums indigenous to Europe, Asia, Africa, and the Americas, although only a handful of species are commonly cultivated. Geums generally prefer moist, well-drained soils in light shade to full sun but do not like wet winter soils. They flourish in full-sun gardens in cool zones if ample water is provided but will appreciate afternoon shade in warmer climates. Leaf scorch and spider mites are not uncommon under hot, dry growing conditions. Water geum, as the name implies, likes a lot of moisture and is adaptable to boggy sites but was also completely happy in the drier conditions of our test garden. 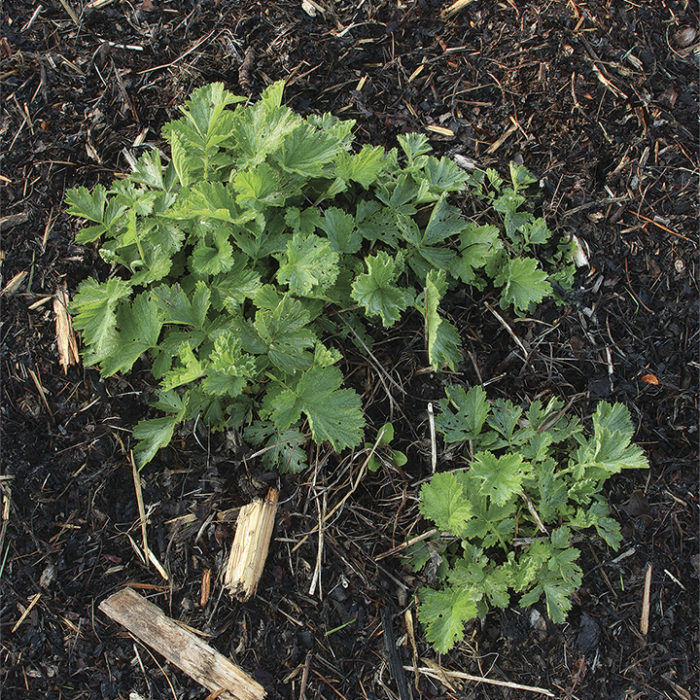 They live longer than once thought

For those who do know a little something about geums, it seems to be generally accepted that they are short-lived plants that require frequent division to keep plants healthy and vigorous. Based on our trial, Chilean geum (G. chiloense) and scarlet geum (G. coccineum) suffer winter dieback and are short-lived species under the best of conditions (we never got them to overwinter). Their hybrid cultivars (‘Blazing Sunset’, ‘Mrs. Bradshaw’, and ‘Georgenberg’) are similarly short-lived. We observed this phenomenon most acutely with ‘Blazing Sunset’, which we planted three times but never got to over­winter. Not all geums, however, are as short-lived or as fussy as reputed. Many of the cultivars and species in our trial grew vigorously for at least four years—sometimes under less-than-ideal conditions, such as hot afternoon sun—and none of them was ever divided.

One occasional chore is critical

Beyond receiving sufficient soil moisture, geums need to be dead­headed. Deadheading encourages flower production into late summer, improves the bedraggled appearance of the plants after flowering, and reduces the potential for reseeding. Geums reseed freely—herb bennet (G. urbanum) was almost weedlike in our trial—and hybridize readily. The cool thing is that sometimes the seedlings have surprising flower colors and forms.

How They were Evaluated

Because growing geums was new to me, it was necessary to evaluate the plants with an especially keen and critical eye. While we still compared the ornamental attributes of the various geums (a sampling of which are represented in this chart), it was equally important to gauge their adaptability to the cultural conditions of the test garden, record any disease and pest problems, and note winter-hardiness issues. We grew the geums for five years in our full-sun beds (Zone 5), which have a well-drained, alkaline, clay-loam soil. The plants got minimal care, thereby allowing them to thrive or fail under natural conditions.

The New Kids on the Block

Three new geums showed enough promise in their initial growing seasons that I felt they should be pointed out for their exceptional performance thus far. Although they have not been in the trial for a full five years, I feel that they are still a safe bet to buy.

Among the best of the newbies is ‘Mai Tai’, a promising rookie that is one of a series of extraordinary new geums being bred by Intrinsic Perennial Gardens in Hebron, Illinois. Apricot-flowered ‘Mai Tai’ is a welcome departure from the hot-color palette and might be the cultivar that finally draws color-conscious gardeners to geums. Flowers open a muted red, fading to apricot with pretty—and prominent—burgundy sepals and flower stems. The outward-facing, single to semi-double flowers bloom generously from midspring to early summer.

‘Diane’ has been in our trial for just two years but has already shown her worth in that short time. Dazzling, golden yellow flowers—almost 2 inches in diameter—are copiously produced on tall wiry stems. ‘Diane’ comes on strong with bold flowers blanketing bushy plants from midspring to early summer and then reblooms sporadically throughout the rest of the season.

I’m a little behind the curve when it comes to understanding the names of some geum cultivars because I know almost nothing about cocktails. ‘Alabama Slammer’ features semi-double orange flowers edged in red with burgundy stems. When I learned that an Alabama slammer cocktail contains sloe gin (a burgundy-colored liqueur flavored with blackthorn plums) and orange juice, it was easy to see how this geum had earned its name. Long after the fiery blossoms have faded, ‘Alabama Slammer’ displays a handsome compact habit for the rest of the summer.

Showing Some Promise, but the Jury is Still Out

Although too new to get a full stamp of approval, two brand-new geum offerings look promising. Both cultivars are hearty, reaching 18 inches tall and 15 inches wide in 2011. With exceptional characteristics like these, I won’t have any trouble keeping my eye on these plants over the next few years.

‘Banana Daiquiri’ features semi-double blossoms of the softest yellow. Its delicate color sets it apart from any other geum I’ve grown up to this point.

‘Cosmopolitan’ certainly has one of the prettiest flowers of all: creamy with a rose-colored edge—a novel color unlike any other—and almost double in form.

The following mail-order plant sellers offer many of the geums featured: