Get the Right Light

Serious gardeners love to get their seeds going in trays before spring for a number of reasons: to extend the growing season, to provide optimal germination conditions, to try unusual varieties, and to save money, among others. But to get those plants growing, you’ve got to have light—a lot of light—and while some gardeners have rooms with plenty of sun, most of us don’t. And even those who do often want longer days than what winter has to offer. So what are gardeners to do when they don’t have enough sunlight? They use artificial light. And there are a lot of lights to choose from: Incandescent, fluorescent, and LED (light-emitting diode) lights all vie for gardeners’ dollars. But which ones really deliver? We conducted a test to find out.

We tested seven different lights, six of which were intended for starting seeds and growing seedlings. We hung these lights in individual plant growth chambers over trays filled with the seeds of various plants, including sweet peas, tomatoes, flowering tobacco, kale, peppers, basil, oregano, arugula, and thyme.

We used a quantum sensor to adjust the lights so that each one provided the same amount of illumination to each tray. Therefore, when we measured how well the plants grew, we were measuring how the quality—rather than the quantity—of light from each source affected these plants.

The plants had no other source of light, and we kept the temperature in each chamber at 72°F during the day and 68°F at night. The lights were on for 14 hours each day. As the seedlings grew, we watered and fertilized each tray as necessary. After five weeks, the plants were harvested, dried, and weighed.

Description: This is a prototype of a new LED lighting system that is scheduled to be on the market in summer 2014. Unlike most LED systems that we have seen, it utilizes many different-colored LED lights as well as a special system to diffuse the light so that the plants that aren’t directly below the system will still be well illuminated.

Pros: The Heliospectra produced the best growth of all of the systems we tested. It is fully programmable, so you can easily alter light intensity as well as spectral composition (color); you can even program it right from your smartphone.

Con: This system is not inexpensive.

The bottom line: The Heliospectra outperformed the other lights right from the beginning, but it is expensive. If you are serious about starting plugs and you have the money, this will be your best option when the product hits the market. We did not test any other high-end LED systems, so there might be others that would provide similar results. 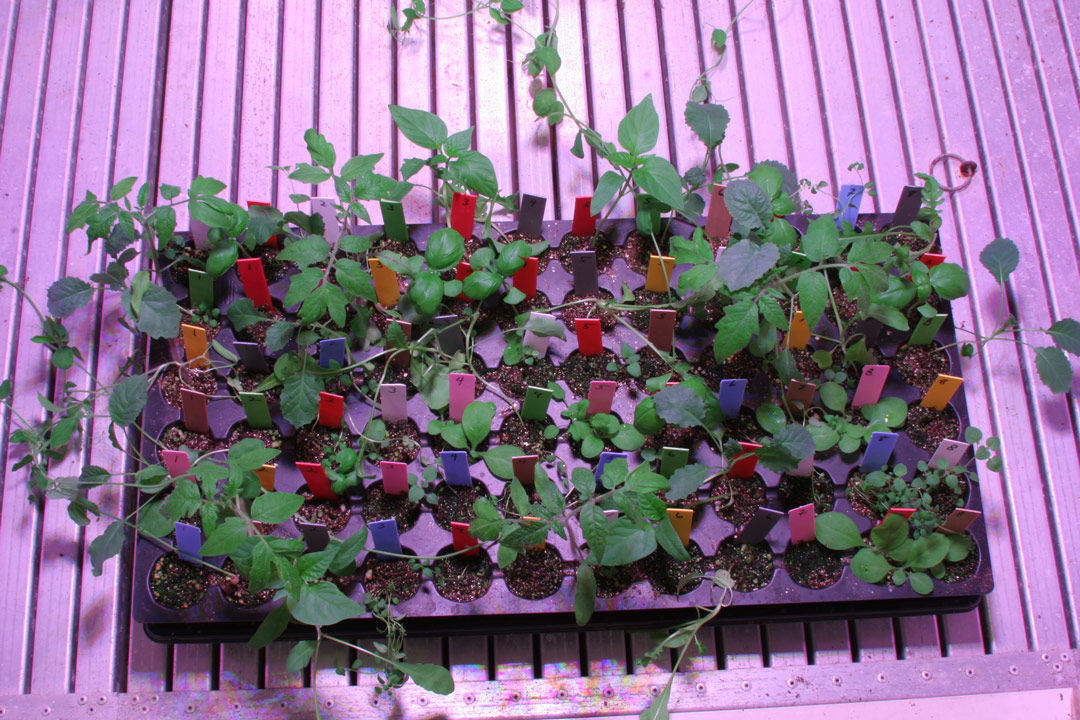 Description: We tested two LED products currently on the market: MiracleLED bulbs and a console built by LEDwholesalers. Right from the start, it was evident that these products lacked intensity and produced columnated light (light focused straight down and not spreading out well). Because of this, plants that were directly below the lights fared better than plants at the edge of the tray.

Pro: These lights were extremely attractive to look at, almost like a modern-day Lite-Brite.

Cons: The plants in the trays under these lights fared abysmally. This performance is probably due to the lack of coverage that the lights provided as well as the specific types of illumination they offered.

The bottom line: If you have a sunny spot and want to jazz it up with some cool-looking lights, these might be a nifty idea. Other than that, don’t waste your money.

Description: We tested three different 4-foot-long fluorescent lights: the Jump Start Grow Light System, a Spectralux T5 replacement tube placed in a Jump Start system, and a standard workshop lamp. Both the Jump Start tube and the Spectralux tube were T5 lamps (indicating that they are smaller, higher-efficiency lamps) and gave off what is generally thought of as a “cooler” or bluer color. The workshop light was a cool-white T12 bulb, a larger, less-efficient fluorescent tube, which has similar qualities to the T5 tubes with slightly different spectral emissions.

Pros: Fluorescent lamps are easily found in any hardware store, are energy efficient, and don’t give off much excess heat. In this study, all the fluorescent lamps performed well, with the workshop lamp faring the best.

Con: Although the fluorescent lamps performed well, they generally weren’t as effective as the Heliospectra or Agrosun lights.

The bottom line: A fluorescent lamp is probably the best choice for any gardener on a budget because of its cost and its energy use. Although we did not test multiple cool and warm lamps together, this approach may be useful for improving plant growth. 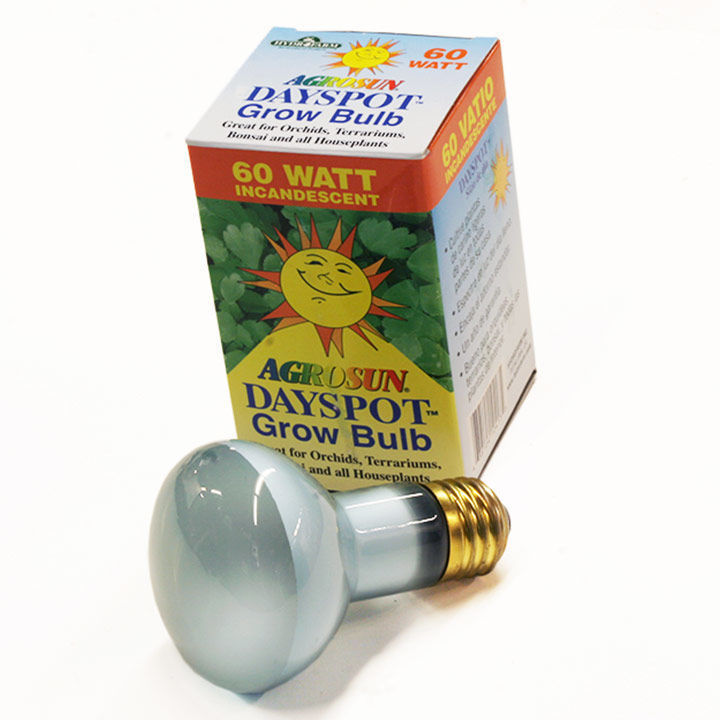 Description: This is the only incandescent light that we tested, and it is found in many garden centers. We used four bulbs to light the tray. Like any incandescent, this bulb gave off more heat than any other bulb. Also, it provided light across a broader range of wavelengths than the other products.

Pro: The incandescent light performed well in our tests, growing plants that were generally second in size only to the Heliospectra lights.

Cons: Incandescent lights are becoming outdated because of their high energy use and heat output, which may be an issue if plants are grown too close to the bulbs.

The bottom line: Although the incandescent light performed well and we don’t want to dismiss it out of hand, we can’t recommend it because of its energy use and heat output. 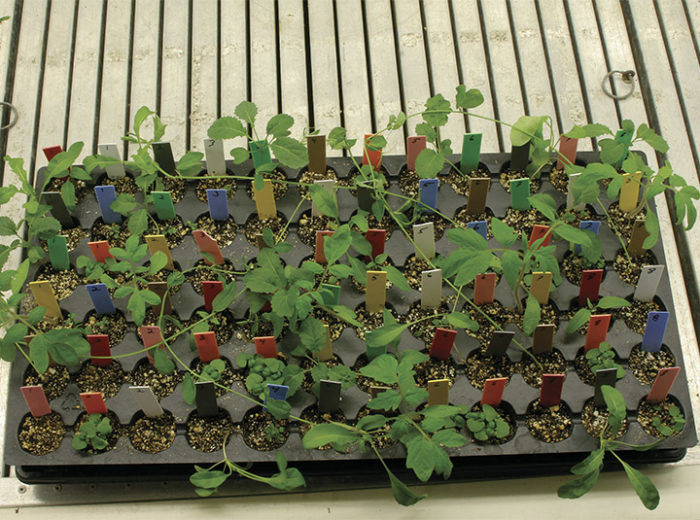 So which product would we choose?

We are all in agreement that if we had the money, we’d purchase the Helio­spectra system. But most of us aren’t that rich, so we would settle for a fluorescent tube. Although the incandescent bulb generally did a little bit better than the fluorescent tubes in terms of plant growth, its higher energy requirement made it less attractive. As a general rule, bulbs should be placed as close to the growing plants as possible while allowing enough room for light to spread out across the whole growing area. If you’re going to use an incandescent bulb, be careful to put enough distance between the light and the plants so that the plants don’t burn.

A look at the numbers

We evaluated the lights by counting how many of the seedlings that germinated survived to the end of the trial and then drying the plants and weighing them. Below are the averages for each light:

Jeff Gillman, Gary Gardner, Redeat Tibebu, and Doug Brinkman are current or former members of the Department of Horticultural Science at the University of Minnesota in St. Paul.